There’s not much left of the Bank of America branch that closed at Reisterstown Road Plaza last month, just two still-working ATMs outside the building.

Banks are shuttering brick-and-mortar branches across the country as the industry moves online and, looked at that way, 6538 Reisterstown Road in Northwest Baltimore is just one more of them.

And yet on a recent afternoon, a long line of people were waiting to use these ATMs – a line that grew longer when one of the machines quit working.

Interviewed as they stood on the sidewalk, customers complained that they missed being able to sit at a desk or stand at the counter and talk to a human being.

“I would come here to handle my business – not just getting cash – and now they’ve made it complicated and inconvenient,” said Vanessa Palmer, 61, who lives minutes away and said she’s been coming to this bank branch for many years.

“You’re outside with all that money,” said Carlotta Taylor, 72, raising the issue that many customers do not feel safe at an open-air ATM.

“What happened – they’re closed?” a woman said, rattling the locked door and peering inside.

“We understand the reasons why a company would want to close branches, but banks are still obligated to serve the community,” said Marceline White, executive director of the Maryland Consumer Rights Coalition, which works on behalf of the state’s low-income and working families.

Citing the Community Reinvestment Act (CRA) passed by Congress in 1977 to reverse the effects of financial redlining, White’s group and more than a dozen community groups and advocacy organizations have filed a complaint to federal regulators about the closure of 6538 Reisterstown Road and other branches in Baltimore. 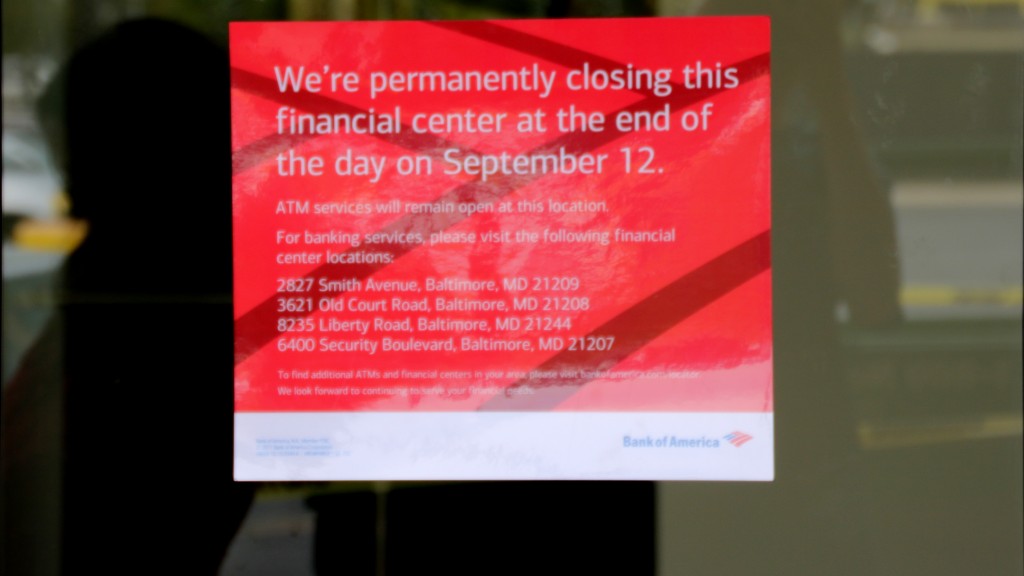 At now-closed the 6538 Reisterstown Road branch, a sign directs customers to other Bank of America locations. (Fern Shen)

In it, they note that in the final years before the company closed this branch – located in a community that is 92% minority and where 34% live below the poverty line – its deposits actually increased dramatically.

“This branch has grown in importance to the community in recent years,” White wrote in her letter to Acting Comptroller of the Currency Keith A. Noreika, requesting a hearing to determine “how the needs of the community will be served as Bank of America retreats from Baltimore neighborhoods.”

The angst around the closure of this one small branch in a nondescript urban shopping center is just part of a larger controversy over the impact of bank closures across the United States.

Since the financial crisis, more than 6,000 branches have closed nationwide, not just because of the move to online, critics say, but to improve the industry’s bottom line.

“Bank branches are there to manage a community’s wealth as well as to reward the bank’s shareholders,” said John Taylor, president and CEO of the National Community Reinvestment Coalition.

Taylor’s remarks came with the NCRC’s release earlier this year of a report that showed inner city and rural communities bore the brunt of the closures.

In fact, their study showed that greater Baltimore had the biggest percentage of closures of any Metropolitan Statistical Area, with a 25% loss between 2008 and 2016. 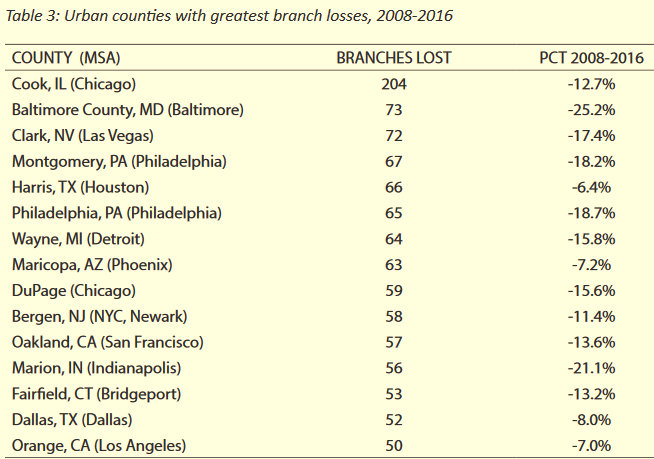 “The bank branch is usually the economic anchor tenant in those communities, and when they leave, other businesses leave with them,” Taylor said. “Communities get poorer and this stresses local and regional economies and social support systems.”

“Everybody Used That Bank”

Longtime west Baltimore activist and publisher Doni Glover, recalling the loss of his Bank of America branch on Pennsylvania Avenue a few years ago, said he was not surprised by White’s findings.

“The idea that big box stores and banks are not supported by low-income people, by black people, is a lie,” said Glover. “Everybody used that bank.” 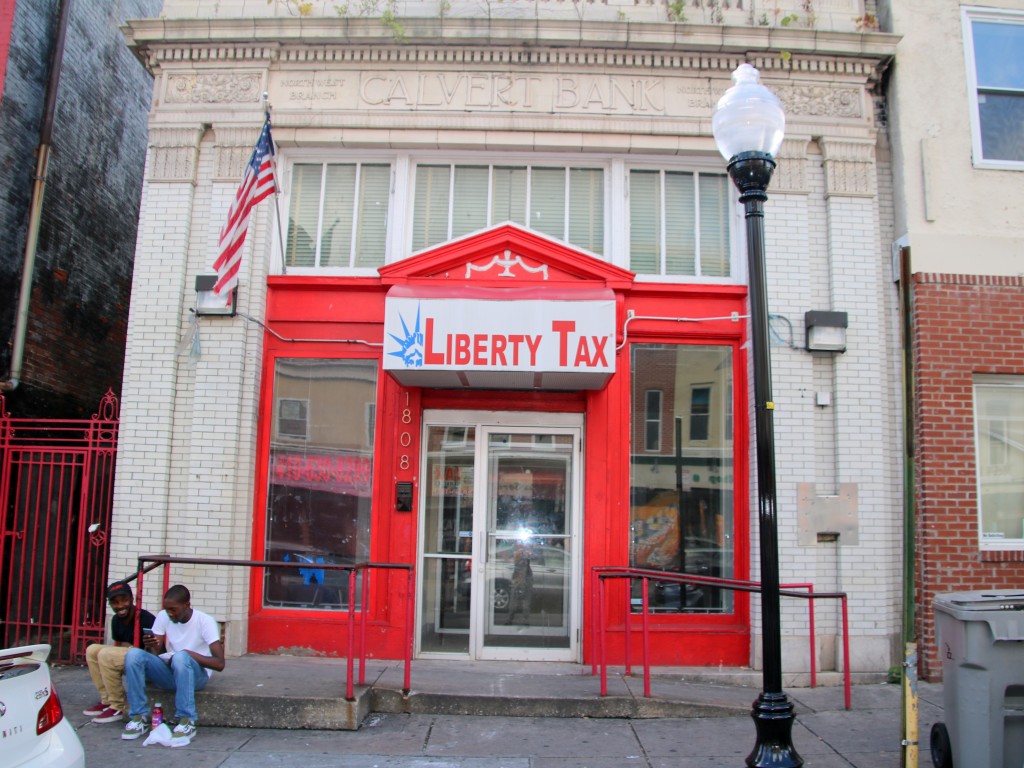 Closed a few years ago, this former Bank of America branch in West Baltimore is now occupied by a tax preparer. (Fern Shen)

White’s coalition argues that Bank of America’s closures in Baltimore – eight have been shut since 2006 – have a disparate impact on communities of color.

“They’re using the technology changes as an excuse to close inner-city branches,” said Robert Strupp, of Baltimore Neighborhoods, Inc. which signed the letter that White wrote. “But there are many people there who need them.”

For transit-dependent people in a city with notoriously undependable transit, getting to a more distant bank branch can be a hardship involving two different buses, Strupp said.

Neighborhood needs go beyond simply cashing or depositing checks. Without a local bank branch, businesses in less affluent communities lose access to banks they need to obtain loans, get small change and fill other commercial needs.

Without banks around, residents often end up turning to less desirable alternatives like payday lenders.

“Now it’s  going to be more difficult – and more expensive – for people to make use of services that are essential,” Strupp said.

Among the features of the Reisterstown Road Plaza is a supermarket, Home Depot and the Maryland Division of Vital Records office where birth certificates and other documents required by government agencies can be obtained.

“The convenience of being able to take care of their banking and all these other things in one place is one more thing they’re losing,” Strupp added.

“We’re Trying to be Sensitive”

Asked about the groups’ complaint, a Bank of America spokesman confirmed that the company is meeting with White and other advocates next month and is “looking forward to their input.”

But ultimately, he said, closures are unavoidable as the entire banking industry moves online.

Charlotte, N.C.-based Bank of America, the nation’s second-largest lender, has gotten rid of about 1,600 bank branches since the financial crisis, according to the Wall Street Journal.

“We welcome the dialogue with them to make sure we’re being as sensitive as we can be through this transition,” said Lawrence Grayson, head of global media relations.

Staff at the branches are doing their best to help familiarize customers with doing basic transactions online, he said. “It may just be a matter of them getting used to it over time.”

Asked to confirm White’s information showing recent increases in deposits at the 6538 Reisterstown Road branch, he said, “I have no reason to disbelieve them.” 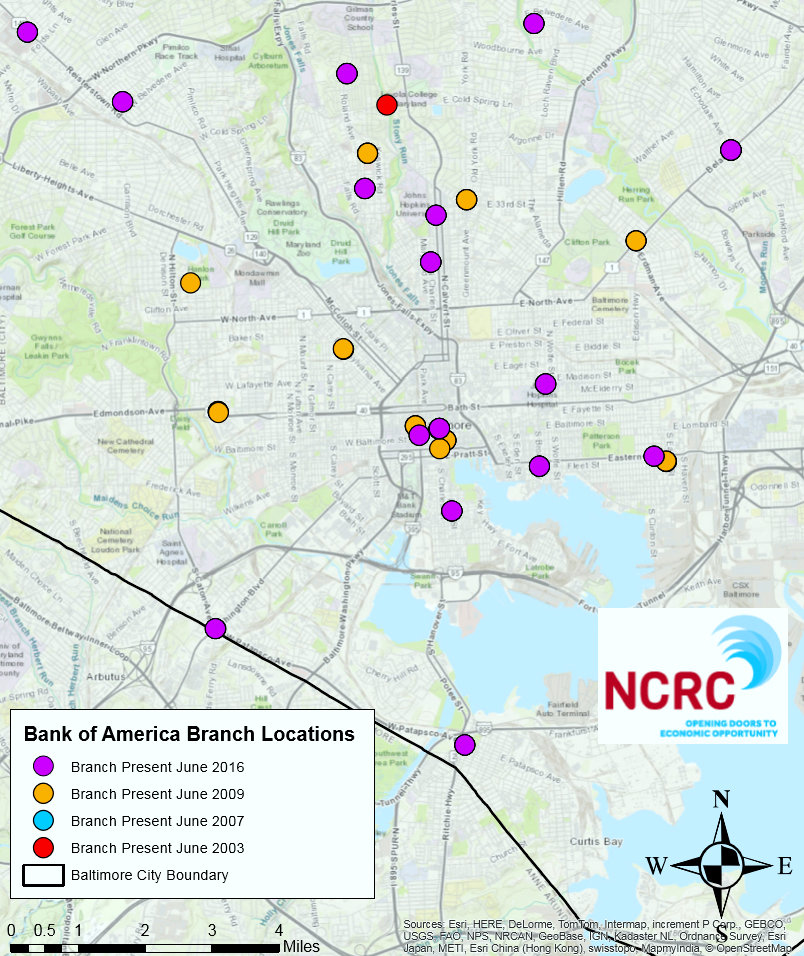 The loss of Bank of America branches in Baltimore. The map excluded the recent closure of 6538 Reisterstown Road. (National Community Reinvestment Coalition)

Grayson noted that other branches are available to serve the customers who lost their branch.

“Within four miles, there are seven Bank of America financial centers with ATMs,” Grayson said.

White said that Grayson is including branches outside the city line and that residents without cars have difficulty reaching them.

“Baltimore is a city of neighborhoods,” she said. “And we need banks in those neighborhoods – not two miles away over the county line.”

In her letter to the Comptroller, White said that Bank of America must “have a robust plan for meeting the banking needs of the entire community – especially those areas which wither from chronic economic disinvestment.”

The groups’ critique will be considered as the Comptroller’s office evaluates the BOA’s compliance with the Community Reinvestment Act, she said, a review conducted of all banks on a regular basis.

Speaking with The Brew, White acknowledged that the groups don’t expect to be able to force the company to reopen the 6538 Reisterstown Road branch.

“But maybe we can get ahead of this closure process in other future situations,” she said.

Providing banking services in post offices or supermarkets is one strategy Strupp suggests. Another approach might be keeping branches open, but allowing them to cut costs by alternating hours, one covering the morning, the other the afternoon.

“There are other things they could do, like providing transportation vouchers to people who lose their branch,” White said. “Just some kind of creative strategies. Other banks have done these things.”
_________________

GROUPS THAT HAVE SIGNED THE MCRC LETTER: