For Samantha Smith, the last straw came at the gala fundraiser for the homeless that she attended Saturday at the invitation of Mayor Catherine Pugh.

Seated near city officials and the $225-a-head VIP donors at the Lyric Theatre for the annual “Evening of Unexpected Delights” homeless benefit, Smith was shocked to hear her name called out from the stage.

“I want to thank a good friend of mine, Samantha Smith, who’s with us this evening,” the mayor said. “Samantha is a homeless individual, but she’s also a leader in the homeless community.”

Smith said she didn’t like Pugh identifying her as homeless (“belittling me”) to score points with the crowd.

“She used me this weekend,” Smith fumed. “After all I’ve done to save your ass and cover your ass. . . We kept asking her for help and we got nothing.” 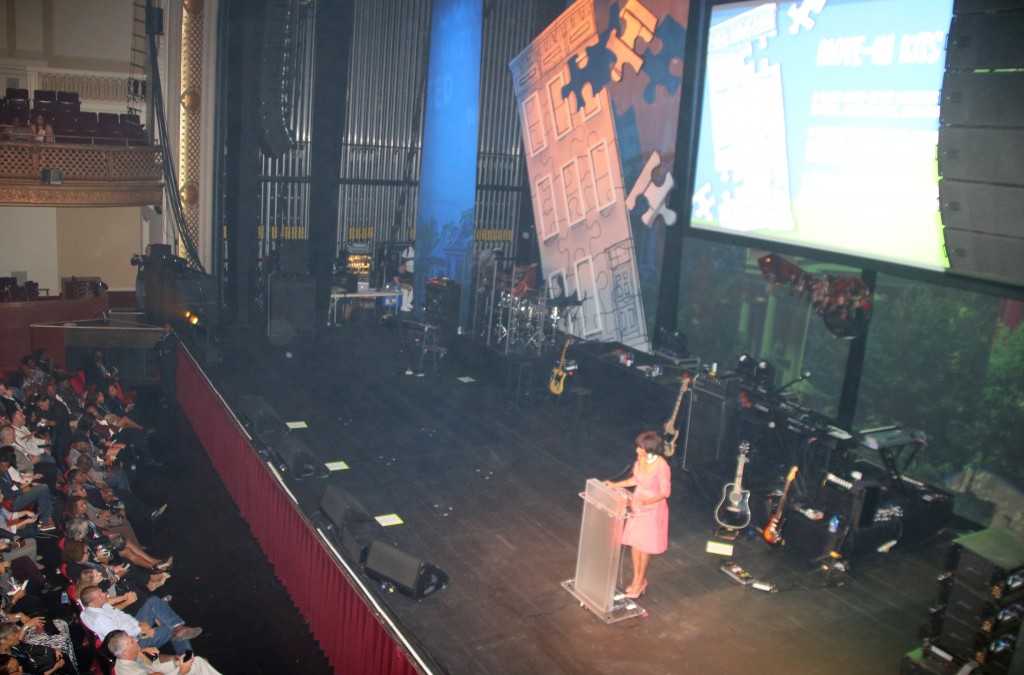 Smith, the leader of the group that had staged a 10-day Tent City homeless protest action in front of City Hall in August, had previously defended Pugh.

But she turned on the mayor yesterday, saying Pugh broke the promises she made when she persuaded the group to disband.

Participants had agreed to move to a former school building in West Baltimore where, after a two-week assessment period, an appropriate housing plan would be developed for each person.

Instead, after 65 days sleeping on cots in the dilapidated school gym, the group is going to be moved to separate men’s and women’s facilities run by Helping Up Mission, a “Christ-based” emergency shelter program in Jonestown.

The Tent City participants’ rehousing is to happen under the “rapid re-housing” model, meaning short-term rental assistance, with no emphasis on supportive service, a  source told The Brew.

Of the original 55 people who went to Pinderhughes, only two people – both mothers with children – received permanent placement in public housing.

“Basically, except for them,” Smith said, “nobody got housing.”

HAPPIER DAYS A MONTH AGO: Mayor Catherine Pugh poses with residents at the Pinderhughes shelter on Labor Day.

It was the latest chapter in the saga of the unusual protest that had homeless people camping out essentially on the mayor’s front lawn, calling for her to do more to help city residents struggling with poverty and lack of affordable housing.

Pugh’s response so far has been to highlight how costly the problem will be to solve and to call on foundations and the private sector for help.

At Saturday’s Journey Home benefit at the Modell Performing Arts Center at the Lyric, she announced that this year fundraising exceeded $1 million. She regularly points to Helping Up Mission’s $35 million plan, most of it privately funded, to build a 300-unit facility in East Baltimore.

Terry Hickey, director of the Mayor’s Office of Human Services, did not respond to questions about the city’s plan for the Pinderhughes group or Smith’s allegations.

Previously, Hickey has said that that individuals who agreed to go to the Pinderhughes facility were aware the process could take time.

Meanwhile, the people living there have become increasingly isolated.

The groups that had supported the action, including Baltimore Bloc and the Southern Christian Leadership Conference, have been critical of Smith’s leadership and distanced themselves from the Pinderhughes group.

And a showdown may be looming when the city tries to move residents to the Helping Up Mission.

Smith says they will refuse to go. “It ain’t happening. We ain’t leaving. We got squatters’ rights,” she said yesterday.

Asked how she looks back on the way Tent City protest ended, Smith said she doesn’t regret her role in it.

When Pugh meets her maker, Smith added, “the question will be did you do everything that the higher power wanted you to do? Or did you do it for personal gain?”

Pugh herself often reaches for a religious reference when talking about her commitment to helping the homeless.

“The reason I say to you it is all our problems,” she exhorted the crowd Saturday, “is because when we lift the least, we lift all of us.” 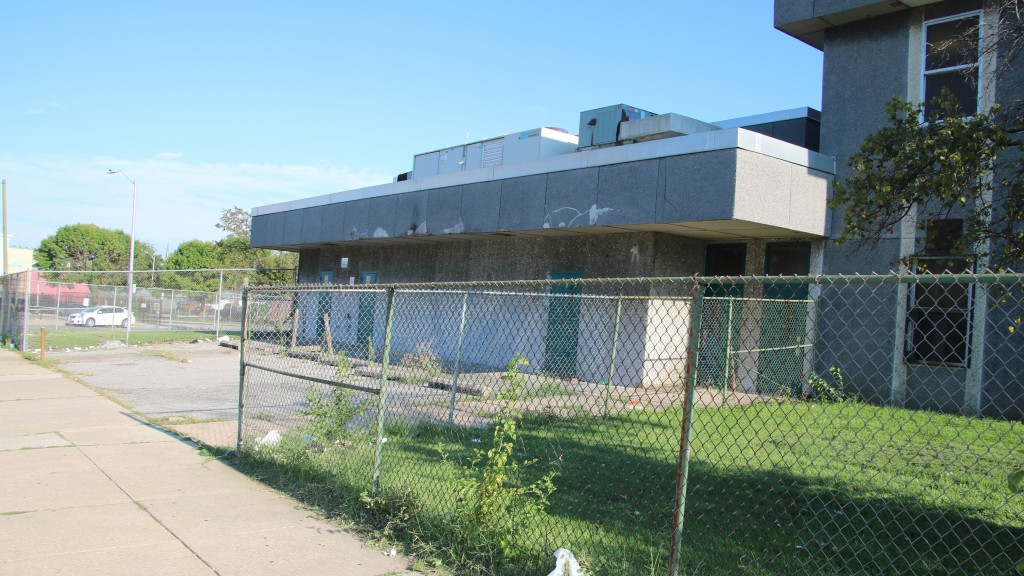 The Tent City participants have been living on cots at this former school building in Sandtown since August. (Fern Shen)

UPDATE:
Baltimore Bloc released this statement on Tent City on 10/31/17 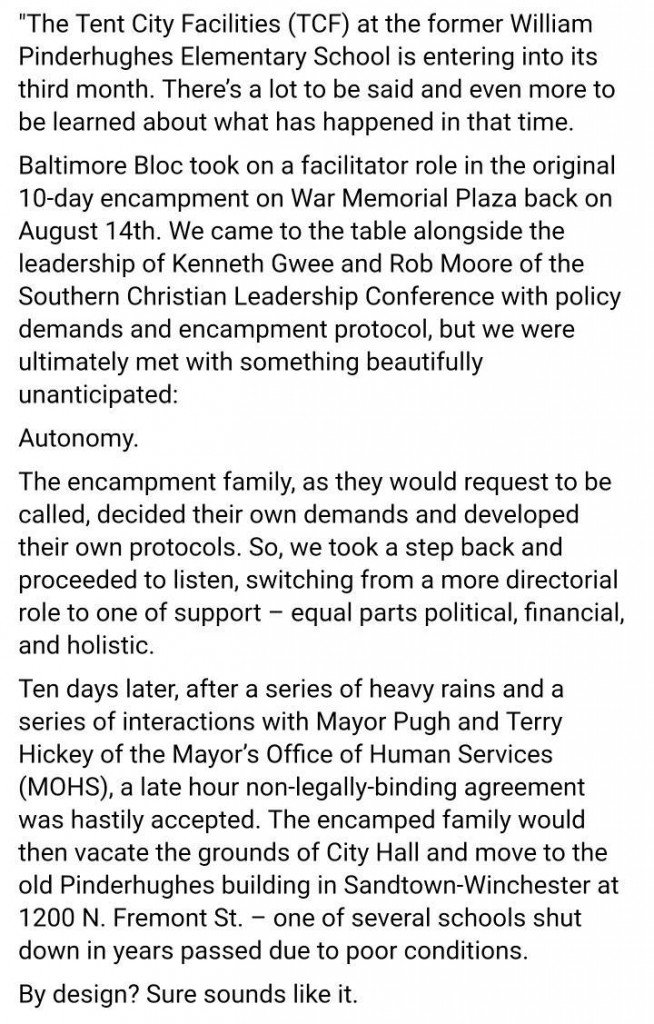 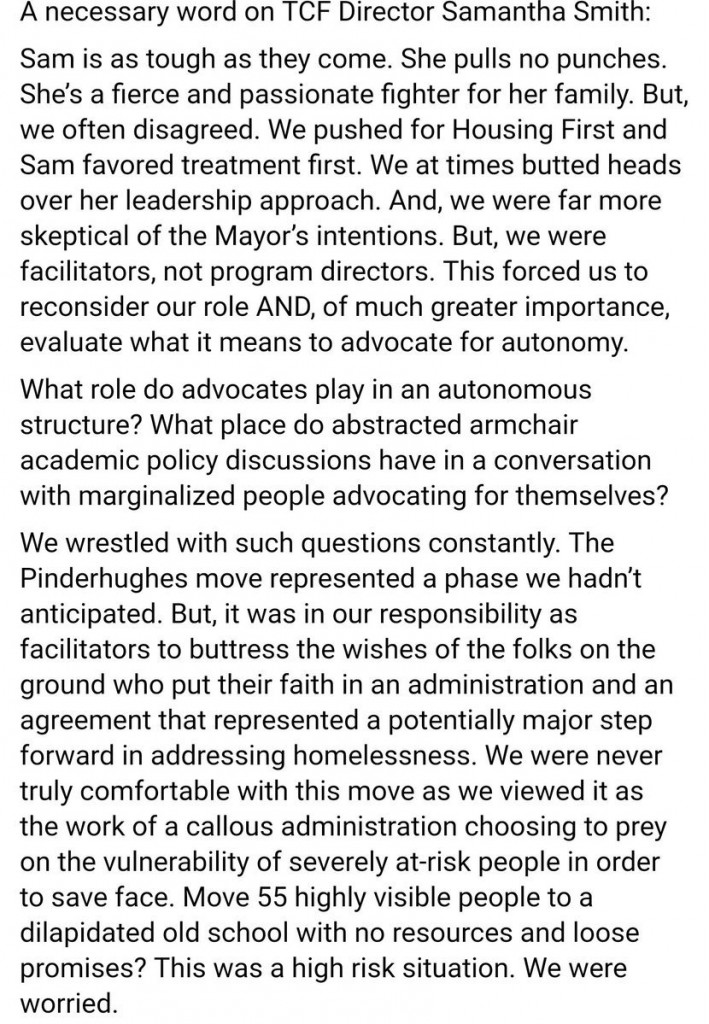 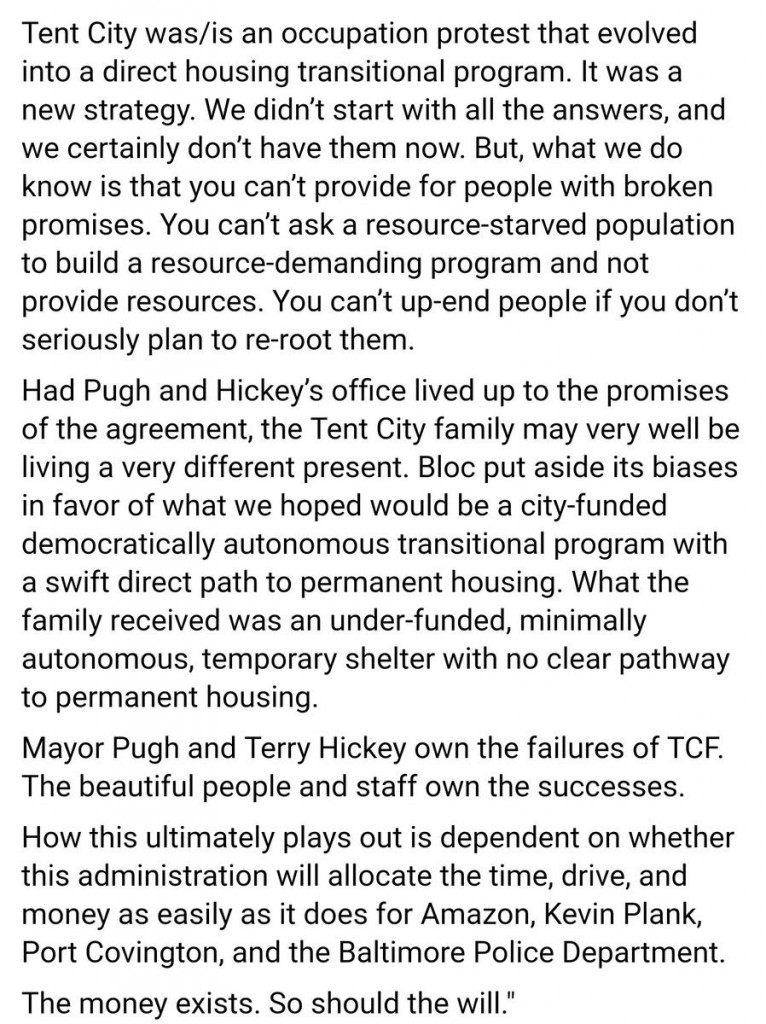