A month after commencing a proactive, multi-agency strategy to reduce crime – beefing up recreational and employment programs and sending liquor inspectors, housing inspectors and other agencies into targeted areas – Mayor Catherine Pugh had an announcement today:

Her approach of “flooding the zone” with municipal services had succeeded in reducing crime.

“I think we’re trending in the right direction,” Pugh said her weekly press briefing, displaying a chart that initially had reporters scratching their heads. The chart compared the four-week period since the program began on October 30 to the 10-week period prior.

She called on Drew Vetter, director of the Mayor’s Office on Criminal Justice, who explained the chart this way:

• In the five geographic areas of the city targeted by the program, the weekly average number of homicides declined from 1.5 homicides to 1 homicide, a 33% reduction.

• Non-fatal shootings during that period declined from 3.1 shootings to 1.4 shootings, a 43% reduction.

Shootings and killings in the rest of the city also declined during this period, but less dramatically.

No, there’s been a reduction when comparing the data year-to-year, Pugh said, promising to get reporters the numbers to prove it. 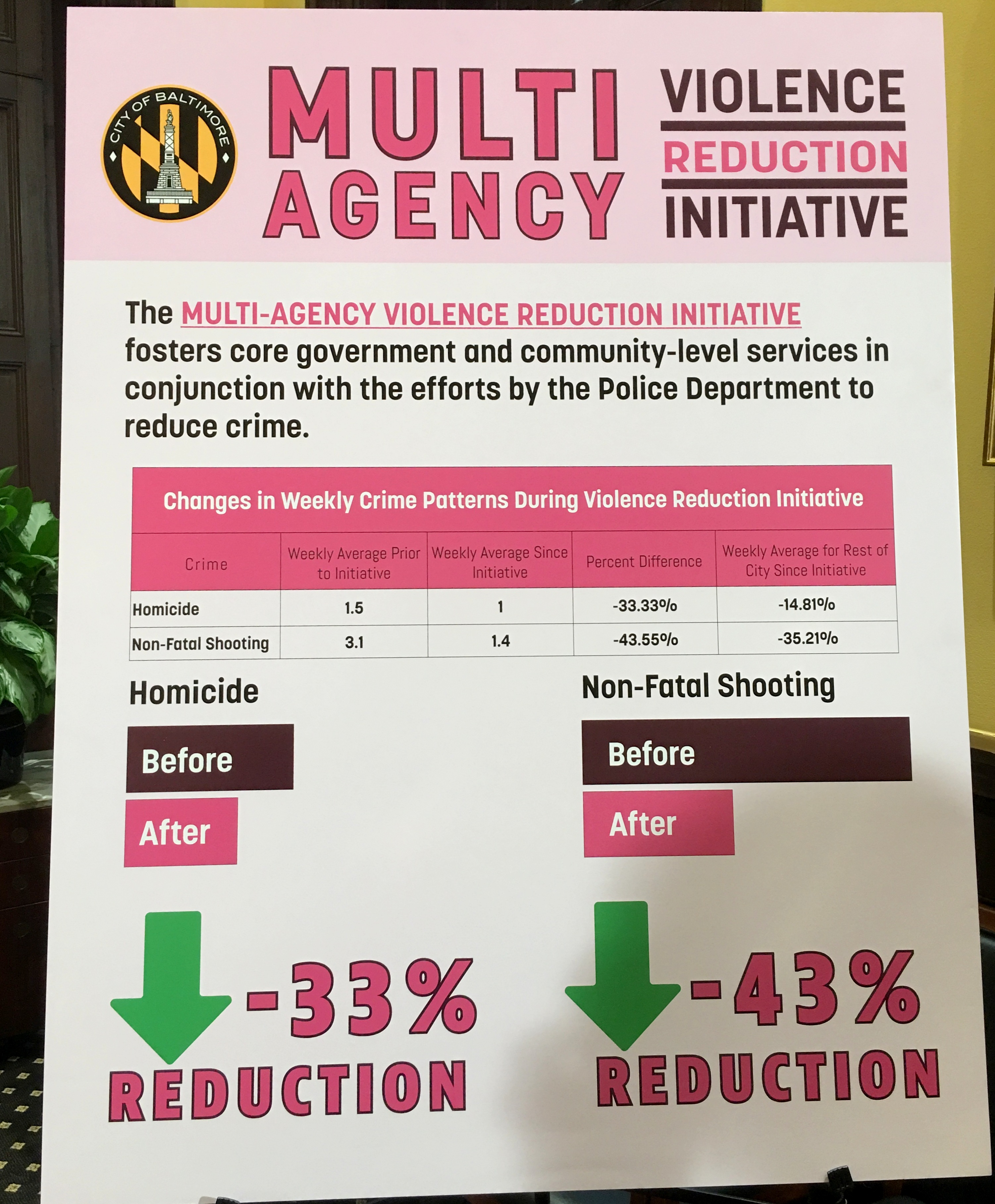 Police Commissioner Kevin Davis was on hand to applaud these efforts.

“The police department is no longer the only city agency that these folks who live in under-served communities for decades see,” said Davis, one of a host of officials standing with Pugh for the City Hall announcement.

“They’re now seeing the rest of this good government try very, very hard to do this good work,” he said.

Those five geographic areas account for 2.3% of city’s geography, but saw over 20% of the murders and non-fatal shootings, Davis explained.

“I think we’re trending in the right direction,” mayor says.

The media event was similar to the one Pugh held last month when she unveiled the initiative. Agency heads, who have been meeting every morning to coordinate efforts that might aid the crime fight, stepped forward to speak when cued by Pugh.

Transportation Director Michelle Pourciau, for example, told how abandoned and illegally parked vehicles had been towed and 20-40 broken streetlights had been “re-lit.”

Department of Public Works Director Rudy Chow spoke about cleaning up alleys and getting rid of weeds and tall grass.

Pugh also took the opportunity today to slap back at Gov. Larry Hogan, who yesterday announced a set of his own anti-crime initiatives for Baltimore.

Hogan’s call for harsher sentences for repeat violent offenders and promise to beef up state police patrols in the city was accompanied with criticism of Pugh’s preventive approach.

“I didn’t consider that to be an immediate violent crime plan or strategy, and I still don’t,” Hogan told reporters. 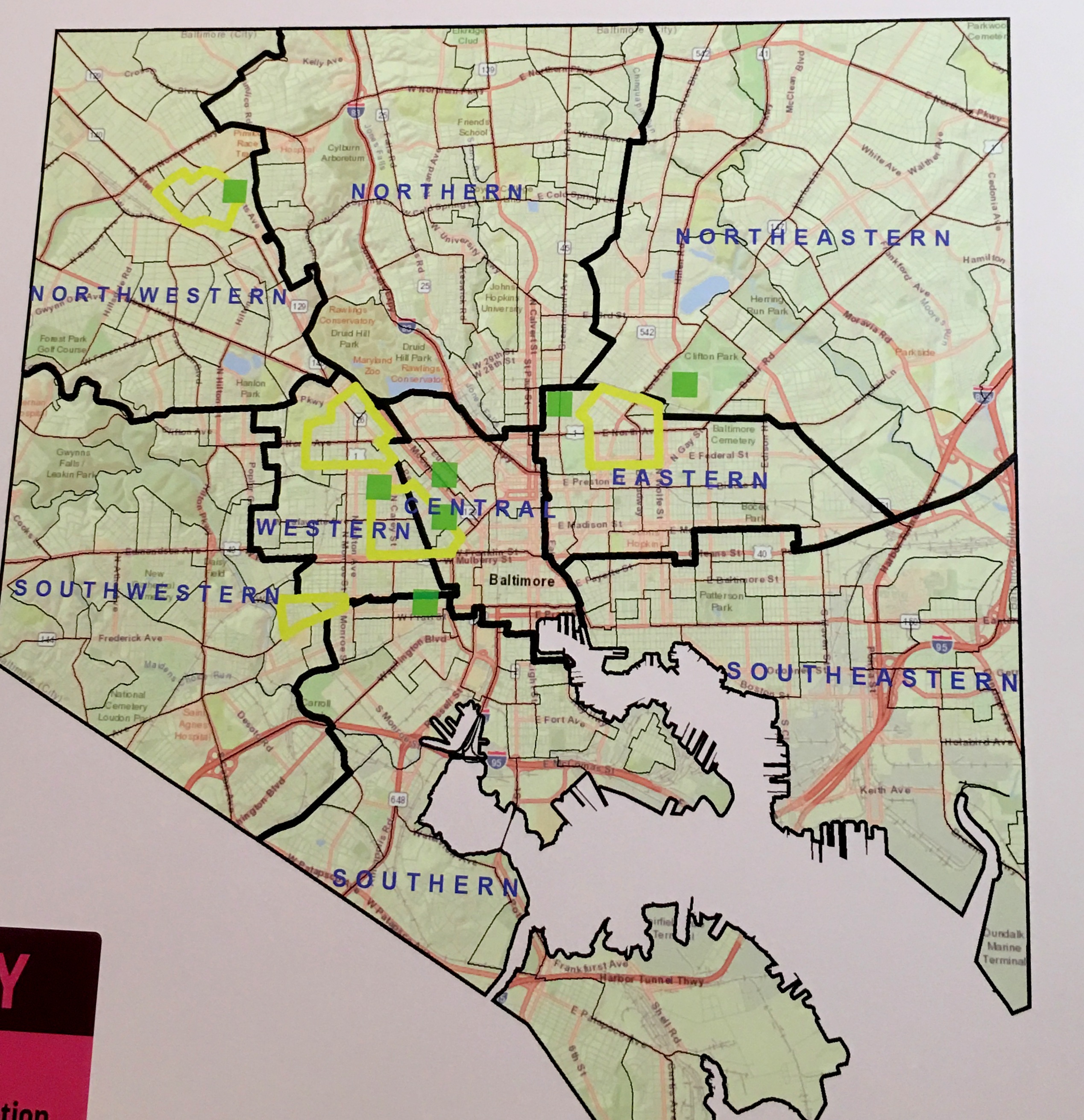 Among the initiatives Hogan discussed were: expanded patrols by Maryland State Police and other state law enforcement agencies in high-crime areas and an “aggressive sweep across the city with 80 U.S. marshals and federal officers serving high-priority warrants.”

Truth-in-sentencing legislation and expedited demolition of vacant buildings in high-crime areas were also on the list.

“There wasn’t anything new announced,” Pugh said, suggesting that most of what Hogan presented were forms of assistance the city had previously requested and that were already taking place.

Asked why there was no one from the city present at Hogan’s announcement, Pugh said she and Davis were both busy with other appointments.

“We didn’t get a call [from Hogan’s office] until yesterday,” she said. “I’m glad he is adhering to suggestions we made in July.”