For those wishing to catch her administration’s message of the day or to hear her walk back a public relations misstep, Mayor Catherine Pugh’s “cabinet in the community” event last night was just the thing.

She was withdrawing her plan to cancel the annual Martin Luther King Day Parade and replace it with a “Day of Service.”

Following her downsizing of the AFRAM festival last summer, the parade cancellation had stirred up a hornet’s nest of anger after Baltimore Magazine broke the story last week.

“We heard from a lot of different people,” Pugh said, addressing a crowd of about 30 citizens and an even larger contingent of city officials and police brass.

“Martin Luther King Boulevard – it’s not us or them, it’s all of us together. So if you folks want to continue the MLK day parade, we will do that,” she said.

As for new initiatives or events, there was a smattering of them announced by department heads and one from Pugh herself – a candlelight vigil on December 28 in front of City Hall.

“What we’re asking people to do is come with a sign with one word of hope – whether it’s love, care, peace, pride – whatever you feel that word should be,” she said, “because we’re going to be doing everything we can in 2018 to make this city better than it was in 2017 and years to come.” 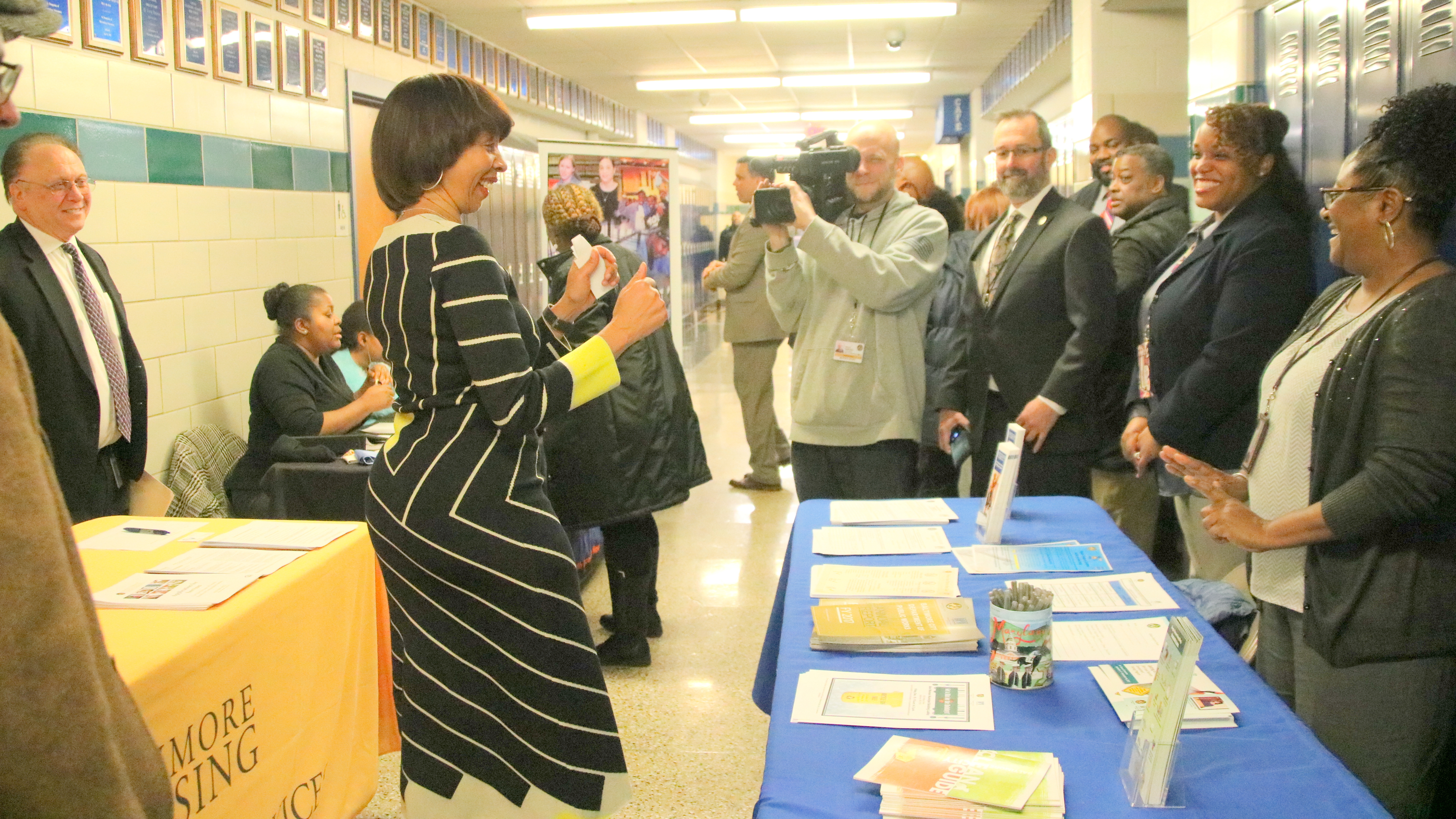 It was thumbs-up and high-fives as Mayor Pugh worked her way down a hallway where agency staffers were stationed to talk to the public. Those seeking to question the mayor (below) were directed by her to the appropriate agency desk. (Fern Shen) 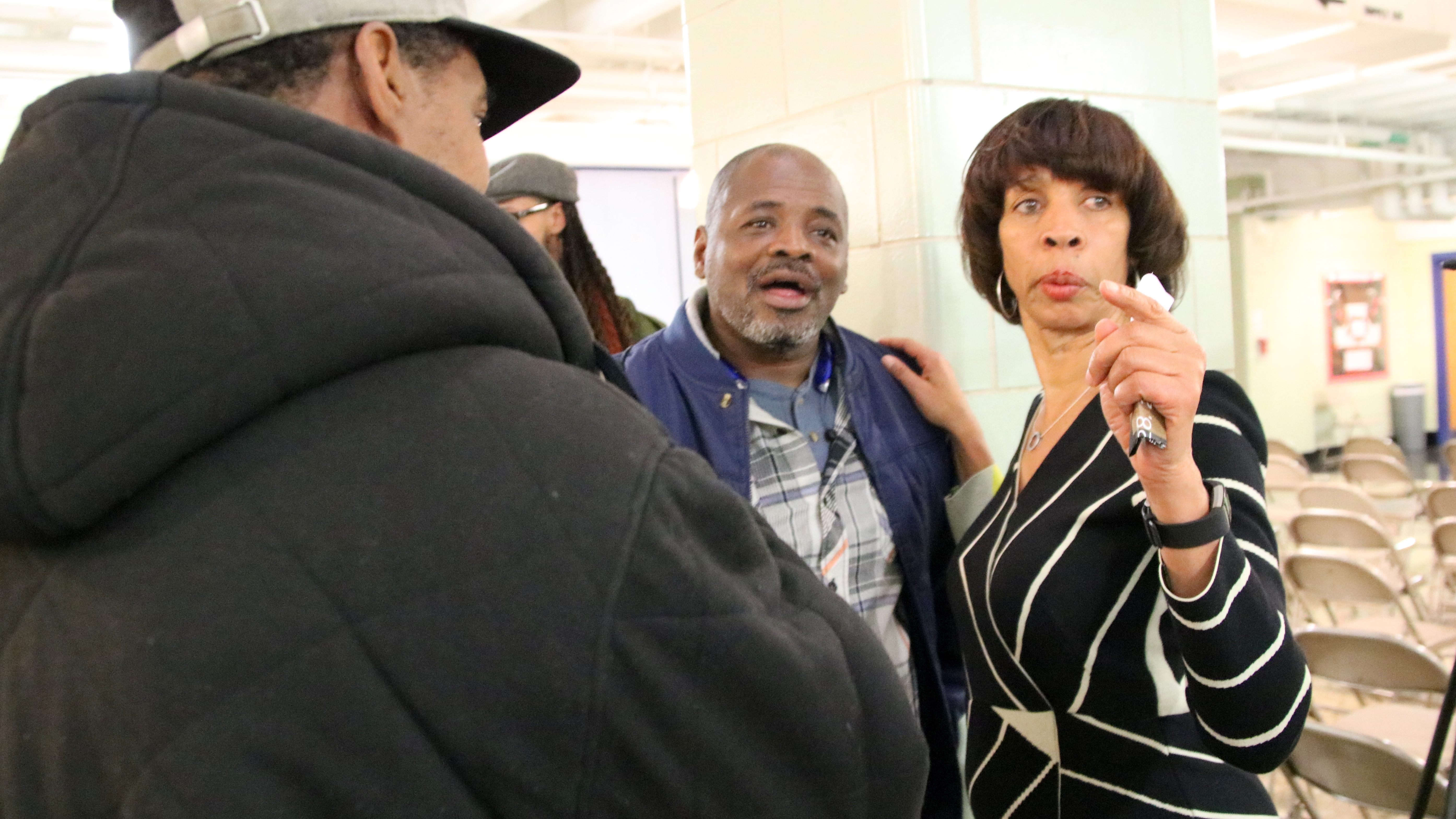 For people like Beverly Savoy, who came hoping that Pugh might help solve some specific neighborhood problems (a new street-cleaning program causing parking problems for seniors, vacant properties causing a nuisance), the evening was a disappointment.

“That’s it? So we’re not going to get to ask questions?” said Savoy, secretary of Evergreen Lawn, the neighborhood association for her West Baltimore community of Evergreen.

The event was advertised as “a community conversation” and a “town hall.” But instead of an interactive format, the audience got a series of remarks from the mayor and her City Hall team, plus a hallway lined with tables full of pamphlets, reports and agency staffers.

“That’s it? So we’re not going to get to ask questions?” an  audience member said after the meeting.

At the top of the mayor’s list last night was public safety.

It might be considered a challenge to find good news at the close of another 300-plus year for homicides. (And on a day when U.S. Attorney General Jeff Sessions was pressed to say that the Justice Department will “probably” take over the investigation of the mysterious death of a city police detective last month.)

Pugh, though, found a way. Background checks for potential new police hires had been taking nine months, “but we’ve got that down to four months!” she exclaimed. The city will expand the Safe Streets program, she also said, and will introduce a Massachusetts-based violence intervention program called Roca. 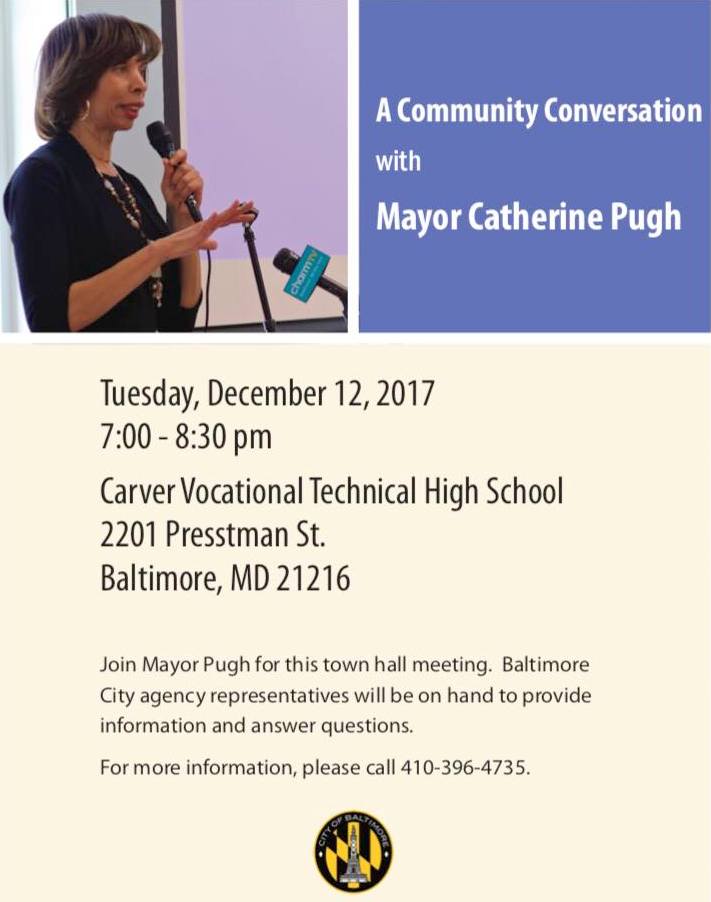 “We’re positioned to go into 2018 with real vision, structure and a plan so that when we meet next time, in a year, we’ll be able to talk about a real reduction in violence,” he said.

“Being Mayor is a Tough Job”

Along with such oft-cited accomplishments as new streetlights and the signing of the Justice Department consent decree, Pugh included some news nuggets.

The shuttered Shake and Bake Family Fun Center on Pennsylvania Avenue, she said, will re-open in stages, starting “some time in February” with the skating rink.

“We put a million dollars into it,” she said, noting that “the roof was about to collapse.”

Whether touting jobs programs or demolition campaigns, Pugh appeared intent on stressing that she cares not just about “downtown,” but also about “the community.”

“We’ve left undone so many neighborhoods for so long,” she said, “and I tell folks that people who live in these neighborhoods, live in these communities [and] have invested for years aren’t moving anywhere and deserve the same kind of investment.”

Stepping up to add his endorsement of the mayor’s hard work was City Council President Bernard C. “Jack” Young.

“This woman stays up late at night, she’s on the phone calling all of the people with the big dollars asking them to donate to the city of Baltimore for all of the various initiatives,” he said.

“This mayor is for all of Baltimore!” he declared, noting how “some people criticize her and don’t understand being mayor is a tough job.”