His grief still fresh after the fatal shooting of his friend, musician Jim Forrester, Jerrod Sydnor went to Mayor Catherine Pugh’s candlelight vigil Thursday – an event for those “impacted by violence in Baltimore City.”

Participants had been encouraged to bring signs “with one word of hope and inspiration.” Most used the pre-printed placards the city handed out at the door with messages like EMBRACE, MIRACLE and IMPROVE.

But Sydnor, one of a handful who brought their own sign, was shocked when a person he assumed to be plainclothes security came up to him at the start of the event in the War Memorial Building and said his sign was “inappropriate.”

“I said, ‘Excuse me?’ and he said ‘You’ve got to take that sign outside,’” Sydnor recalled. 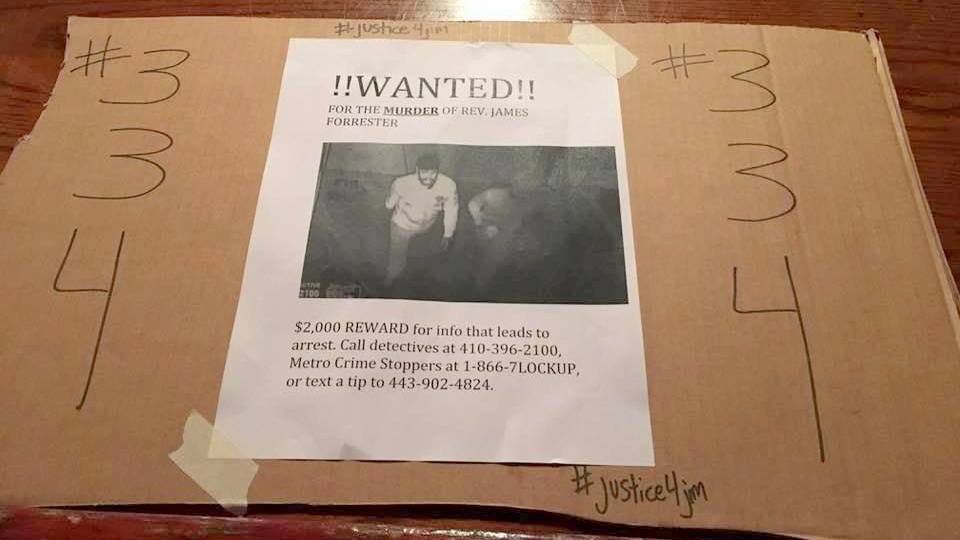 Jerrod Sydnor said security personnel told him this sign was inappropriate and could not be allowed at Mayor Pugh’s candlelight vigil. (Fern Shen)

The sign was made from the Metro Crime Stoppers “WANTED” flier that was circulated by city police following Forrester’s death outside the Baltimore Tattoo Museum on December 18.

The flier, taped to a piece of cardboard, included text and a photo of two suspects from security camera footage.

“Honestly, none of us said anything, we were so surprised he said this,” said Kelley Langley, another person who came in honor of Forrester and witnessed the encounter.

The man “did not say that we needed to leave . . . but at that point, it just made sense,” she said. “We just walked out in shock.”

Sydnor and Langley both say, in retrospect, they wish they had asked the man to identify himself and formally eject them.

But Sydnor says he has no doubt the person, dressed in a charcoal gray suit and long, gray overcoat, was security or a mayoral staffer with authority.

“I’ve been a bartender for 13 years – I know what security looks like, how they carry themselves, the body language,” he said.

Asked about the incident, Pugh was indignant and called the allegation “ridiculous.”

“That is so not true! Anybody could walk into that event,” she said. “The only thing we screened for was guns.”

Originally planned to take place on War Memorial Plaza, the vigil was moved indoors because of the cold weather, city officials said. Participants had to pass through metal detectors and have their bags checked. 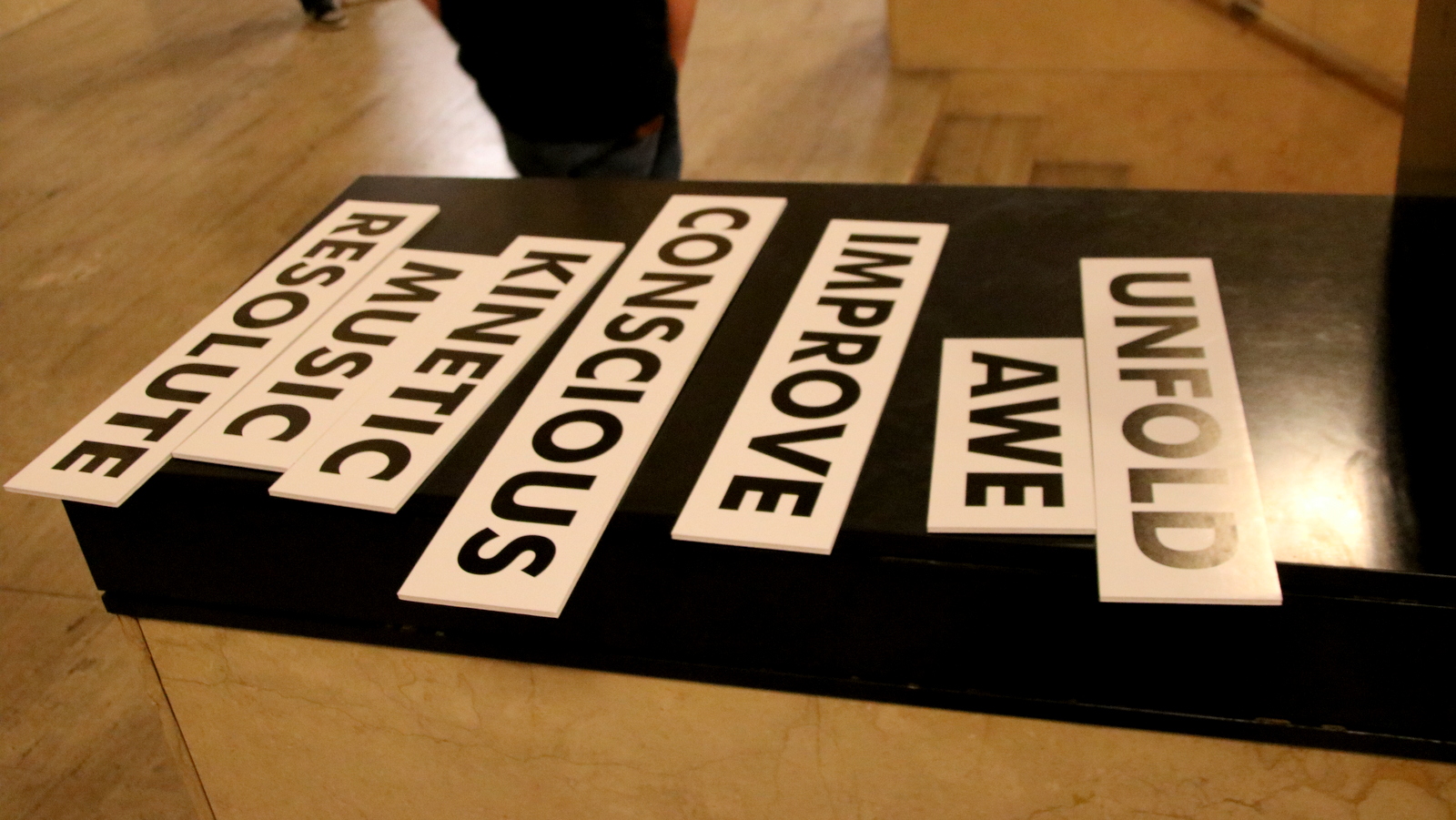 Amanda Rodrigues-Smith, a spokeswoman for Mayor Pugh, said about 200 of these signs were made for the candlelight vigil. (Fern Shen)

Pugh said handmade signs were allowed and noted that she mentioned some of them from the podium.

“No one was discriminated against because of their signs,” she said, speculating that someone might want to discredit the event by spreading false rumors on social media.

Pugh said the media should be more positive and convey the spirit of a “collaborative” event designed “to allow people to heal.”

“Thought it would be cathartic”

A little healing is what Sydnor, 37, says he was looking for when he decided to go to the vigil.

Sydnor said his friend had survived serious health crises and had married and was doing well. Forrester was outside, in the 1500 block of Eastern Avenue, when he was shot in the chest, police say.

“He avoided death numerous times, and then to have something like this happen, ” Sydnor said. “A botched robbery or something. It’s just not right.” 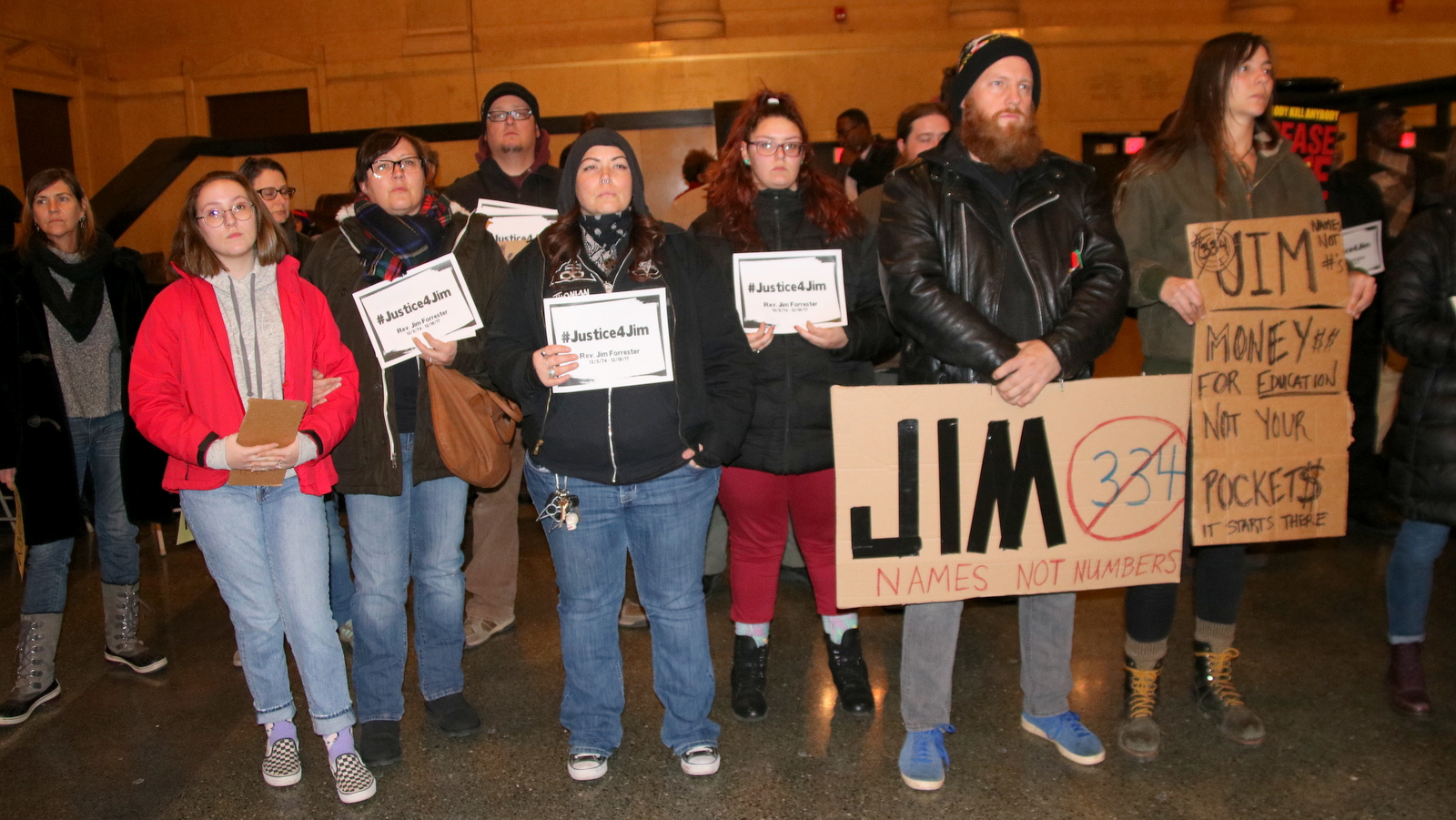 Sydnor said other friends of the popular bass player attended the vigil (“His widow was there – god, it’s hard for me to even say that word”) and displayed their homemade signs without drawing rebuke.

Many of the signs said #Justice4Jim and #334, a reference to the fact that “Rev. Jim Forrester,” as he was affectionately known, was the 334th person to be murdered in Baltimore in 2017.

“I said, ‘Excuse me?’ and he said ‘You’ve got to take that sign outside,’” Sydnor recalled.

Sydnor said he’s not sure why the others were allowed to remain in the building and he wasn’t. He wondered whether it was because his had the photo of the suspects.

“I was just flabbergasted over how they could consider that inappropriate,” he said. “It comes from the police.”

Sydnor said he respects the idea of a vigil – and didn’t do anything to disrupt Pugh’s – but had a stronger sentiment to share that night.

“You can do all the prayers you want, but the city’s leaders need to do more,” he said. “If nothing is ever accomplished to change things, it’s just posturing and empty gestures.” 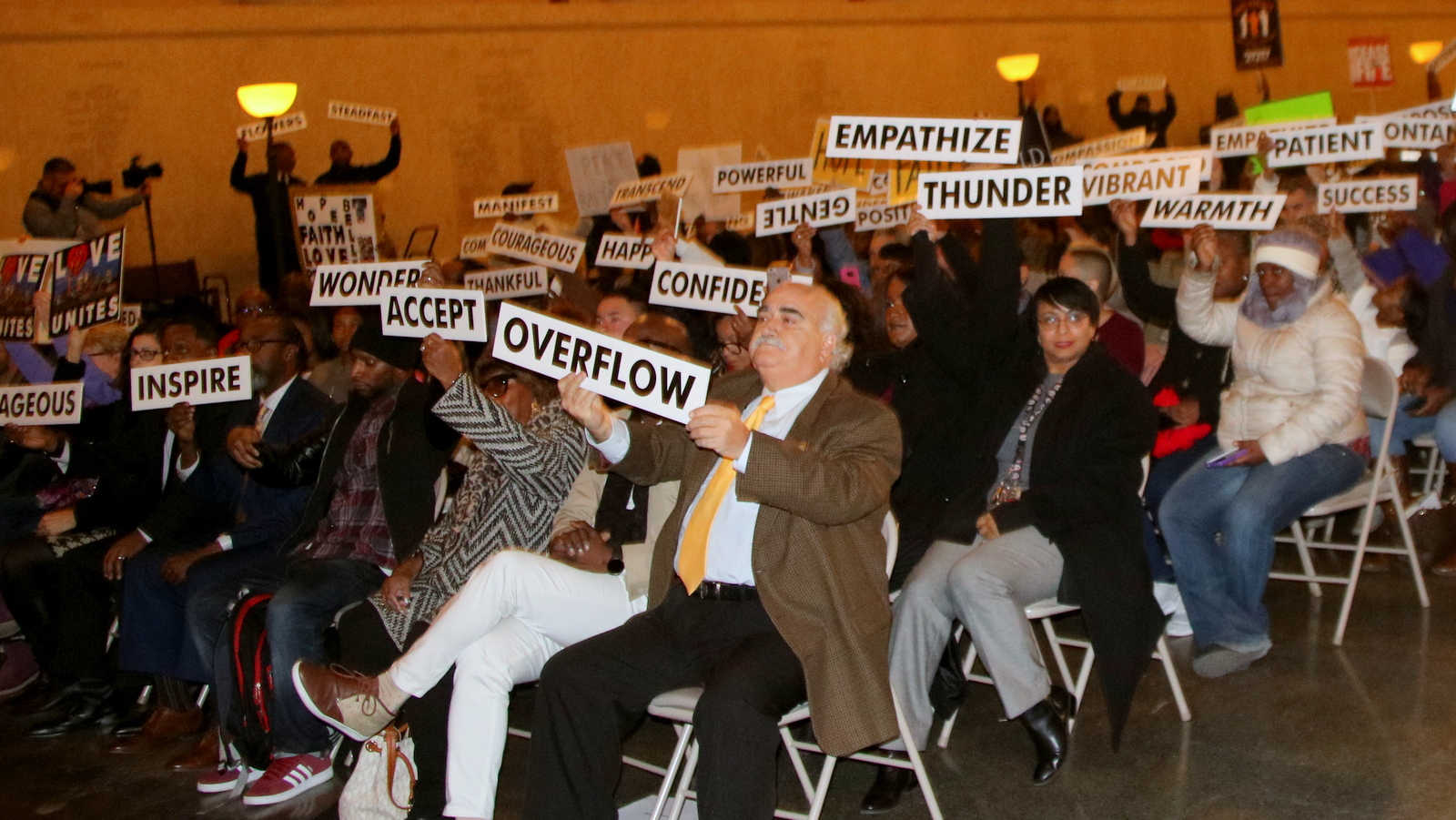 When prompted by the Mayor, the crowd held up their signs and she read some of the words aloud. (Fern Shen)

Others Had Signs Rejected

Sydnor and Langley aren’t the only ones told their signs had to go. Another friend of Forrester, Matt Setters, said he had the same experience.

Setters’ sign had Forrester’s name, the number 334 and the hashtag #Justice4Jim. He said he was inside and, at the start of the event, when Mayor Pugh asked the crowd to hold up their signs, he lifted his.

“It was almost instantaneous – as soon as we held them up, this guy from the mayor’s security comes over and tells me my sign’s not appropriate and I have to take it out side,” Setters said.

The person who spoke to him followed him to the door to make sure he complied, Setters said.

“I find it kind of outrageous that she is denying it happened now,” Setters said. “My friend Alex was with me and had a sign like mine and he was asked to leave too.” 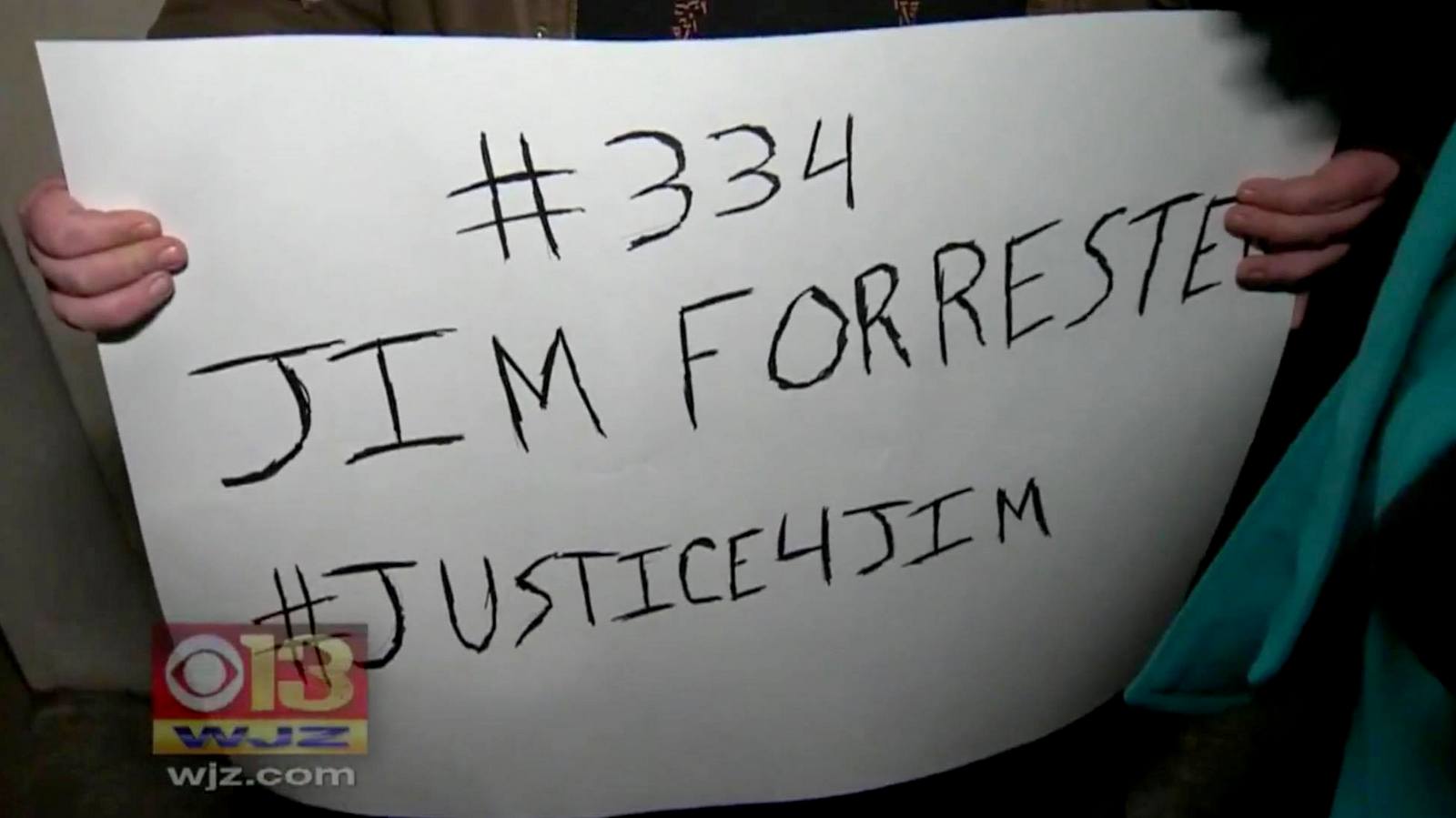 Setters said after he returned, sign-less, to the hall, he saw the person who had just told him it was inappropriate speaking with the Mayor.

A 28-year-old machinist, Setters said he and others came to the vigil because they want to make sure Forrester’s killer is found and punished.

“We just want justice for Jim and for every single family that is going through this,” he said. 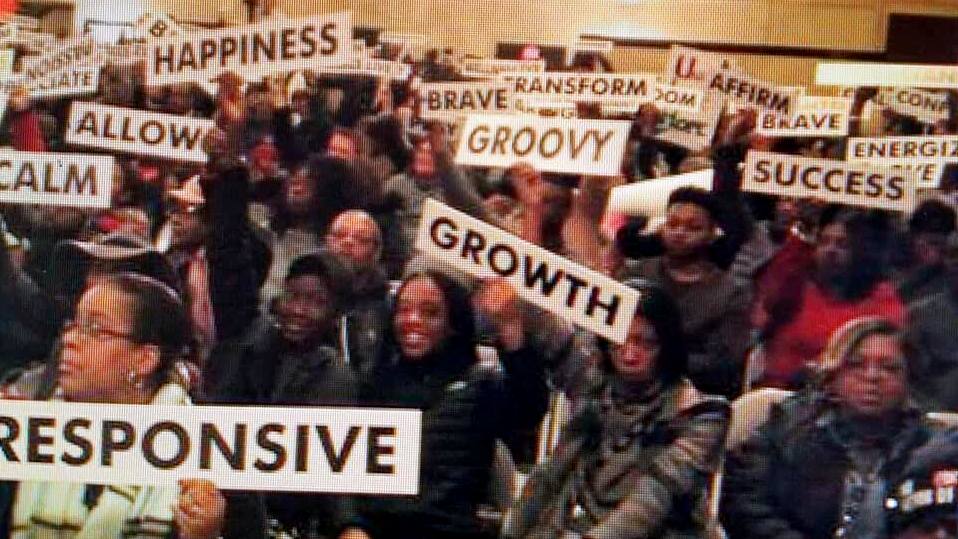 Should the city be handing out signs that say GROOVY at a vigil for families who lost a loved one to violence? Some participants said they found them inappropriate.

He said he found some of the pre-printed words on the signs the Mayor’s office handed out “disrespectful to people who just lost a loved one.”

“There was a sign that said PLAYFUL and another one that said GROOVY,” he said. “I just can’t imagine what they were thinking.”

The mayor’s office has not yet responded to a question about who provided security for the event.

But Baltimore police scanner chatter suggest personnel who were communicating there were very focused on the content of the signage:

* Alright you guys catch a visual inside the main hall?

* Got any signage there? The mayor’s signs are, about like, 8 inches by 20 inches. But we got some signs from SAFE STREETS in there. You got any other signs at all? ….If you see one on camera that sticks out to you

** No. The only one obvious is SAFE STREETS but we don’t have the ability to manipulate the cameras.

** On the east side near the stairwell there’s a female in a purple topcoat holding a sign that we cannot make out. …..Sgt Nichols…purple topcoat, is that one of the signs?

*Purple topcoat just checked out to see if she’s one of the appropriate sign-holders.

** I’ll go over and check her again. One individual is wearing a sign that says JOBS. Over there by the door. Another has a sign that says “Enough is Enough” in reference to violence. We have a small amount of protesters that have signs, small signs that say hashtag Justice 4Jim

(The scanner audio was a little hard to make out. To hear it for yourself go to this link and plug in the date, December 28. Start listening at 7:08:30. -fs)