People living in an encampment of tents and makeshift shelters along Guilford Avenue will have to move by January 26, officials from the office of Mayor Catherine Pugh said today.

“Unsoiled items appearing to be personal belonging that can be safely stored will be transported to 700 West Reedbird Avenue and stored for 90 days,” said the signs city workers were fastening to the pillars supporting I-83.

It’s the standard procedure the city has used in past encampment clearings.

City trash trucks cart the tents and blankets off and, if unclaimed, they are discarded in 90 days. “No trespassing” signs and fencing is also planned, as with the encampment cleared along Martin Luther King Jr. Boulevard.

The news was a blow to the homeless people – about three blocks from City Hall – whose numbers have been increasing in recent months.

Several of them embraced today, after hearing the news from city workers with clipboards working their way through the mini-city of about three dozen tents and tarps on Guilford Avenue.

“I just bought this tent at Wal-Mart,” said a woman who said city shelters are full due to the cold weather. “You can’t sleep standing up. Isn’t there any kind of campground where I can go?” 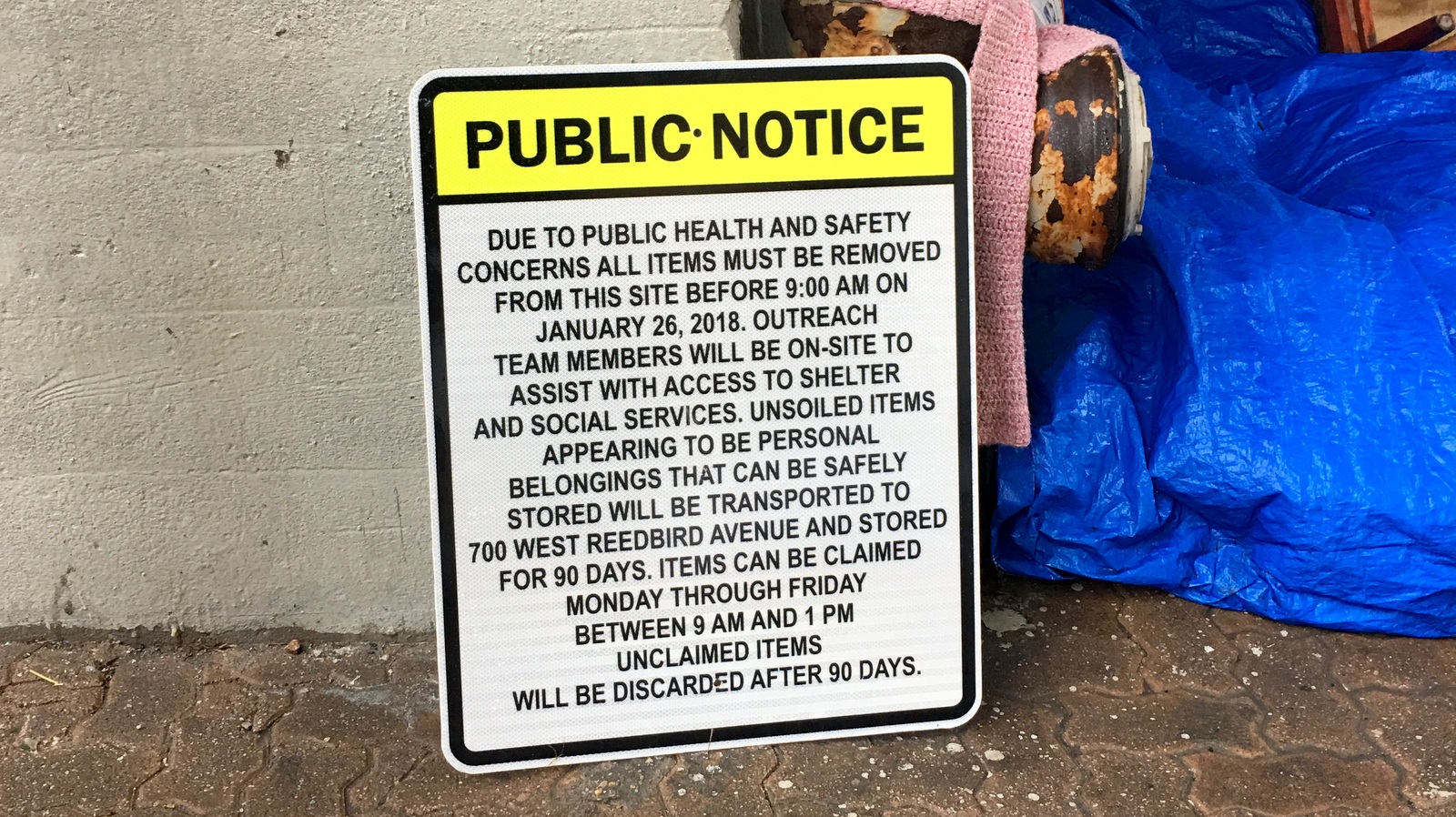 Workers put these signs up today along the Fallsway and Guilford Avenue. (Fern Shen)

“Due to rapidly escalating health and safety concerns, the city has made the determination to clear the encampments along Guilford Avenue and smaller nearby encampments on Bath Street and Fallsway,” Terry Hickey, director of the Mayor’s Office of Human Services, wrote in a memo to advocates.

Hickey has not yet responded to a query as to what specifically those concerns are.

The area to be cleared includes dozens of tents and other dwellings between the Guilford Avenue and Fallsway sidewalks and the parking area beneath the Jones Falls Expressway.

It also appears to include the Bath Street steam vents alongside the Baltimore Sun building where people have also been sleeping. 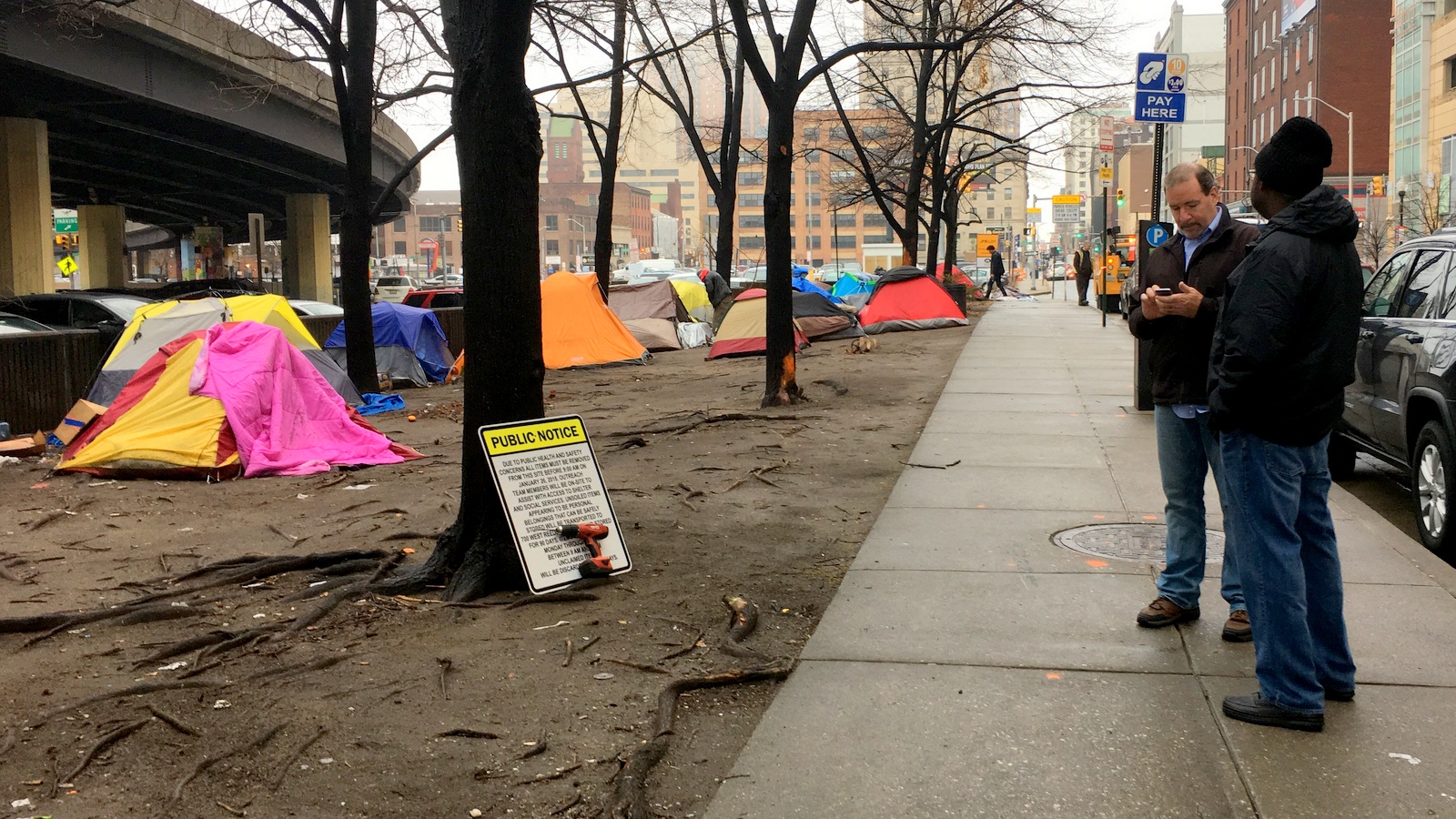 The city’s Chris Rafferty and other staffers sruvey the scene on Guilford. (Fern Shen)

According to Hickey’s memo, all the current residents of these encampments will be moved to housing supplied by the provider the city is partnering with, Volunteers of America.

“The VOA Bridge Housing facility will be a low barrier, comprehensive, 24/7 dormitory-style program with access to showers, bathrooms, laundry and dining facilities,” he wrote. The housing will be available starting January 16.

“It will have access to storage of personal belongings as well as round the clock, elective case management and supportive services,” the memo continued. “A shuttle service will be provided so that residents can access off-site services, jobs, etc.”

Hickey said outreach workers from the mayor’s office and nonprofit agencies have been working with encampment residents for several weeks “completing coordinated access assessments and related paperwork in addition to advising residents of available options.”

Since taking office, Pugh  has struggled on the issue of homeless, facing a Tent City protest in front of City Hall in August. And she was criticized  by advocates for the abrupt clearing of an encampment near Martin Luther King Jr. Boulevard last March.

In that case, though, the residents were offered permanent housing and five of the nine displaced persons received it, according to Carolyn Johnson, a staff attorney with the Homeless Persons Representation Project.

In this upcoming encampment clearing, the city is offering temporary housing.

Johnson, who spoke with the residents there today, said the idea of a temporary “dormitory” style facility made people leery.

“People there that I talked to don’t want to go,” she said.

“I don’t know what the city will do if January 26 arrives and these people have not opted to leave. I don’t know how the government physically moves people without police and arrests,” she said. “I hope it doesn’t come to that. This is really unprecedented.”

Hickey, in his memo, indicated that permanent housing options are not available for people who need them in Baltimore

“Mayor Pugh feels strongly that safe, stable permanent housing is the best solution to address homelessness in this city,” he wrote.

“The reality, however, is that there is not currently capacity to provide immediate permanent housing to all who require it.”