On the heels of remarks on Wednesday that played poorly in Baltimore – telling reporters that she has not been following the testimony in the federal Gun Trace Task Force police corruption trial – Mayor Catherine Pugh unloaded about the press last night.

“One of the things that I know about our city is that there is a perception problem. But there’s also a media problem,” Pugh said before an audience at the Parkway Theatre, assembled by Baltimore magazine to salute “Baltimore Visionaries.”

Addressing some of the people being recognized by the magazine for “creating positive change,” the mayor launched into a denunciation of local reporting outlets.

“That’s why I became mayor – because I want to change that perception and work on the media not depicting Baltimore always as this negative place to be,” she said.

Her remarks echoed those of City Council President Jack Young, who denounced the press in December.

Exhibit A in the mayor’s media critique was the Baltimore Sun’s reporting on her statement about not following the GTTF trial.

“Just only yesterday, I was having a conversation with our media where they were saying, ‘Are you following the trial of our police officers? Are you sitting in court?’”

“I said, ‘No, I don’t have time to sit in court every day because I have a city to run,’” she recounted.

The Parkway audience listened politely to her not-totally-accurate recall of the Q and A exchange with Sun reporter Ian Duncan on Wednesday.

Duncan did not ask Pugh if she was “sitting in court.” He asked if she was keeping up with the trial and clarified, “Are you reading about it?”

Pugh told the Parkway audience that the GTTF story came from “a reporter who was angry [that] I caught him on a story that he said a week ago that was totally incorrect.”

This remark referred to Duncan’s story on her plans to spend $150,000 on enhancing her office’s broadcasting capability by installing equipment in two rooms at City Hall, part of her administration’s public relations effort that The Brew has written about (here, here, here and here).

“There’s always this ‘I got you’ moment,’” she complained, again citing a “media perception problem.”

Her remarks echoed those of City Council President Bernard C. “Jack” Young, who denounced the press in December.

“The more we can keep the news media out of our business, the better we can run this city,” Young said, as Mayor Pugh stood by his side during a West Baltimore community meeting.

(A spokesman later said the Council president understands the importance of a free press and was talking about stories “just meant to draw eyeballs.”)

As the Gun Trace Task Force trial wound down after  eight days of blockbuster testimony, Pugh was bracing for media questions about how she would restore confidence in the BPD.

In addition to carrying out the requirements of the federal Consent Decree under the guidance of a monitoring team, Pugh said, her new police commissioner, Darryl De Sousa, had reorganized police leadership and would be holding a news conference on additional measures.

“You’ll hear from the Commissioner about how he’s looking at all of these issues,” she promised.

Her statement at the same news conference that she was not following the trial closely, however, undercut her efforts to reassure the public.

“If you are not following this issue you should not be our mayor,” one woman wrote on Baltimore Voters Facebook. 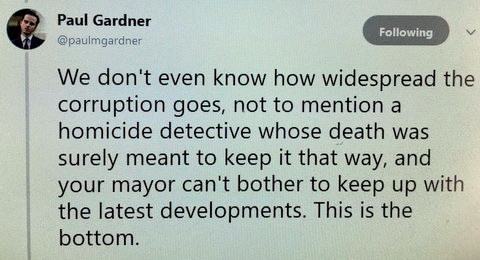 Responding to the firestorm about her statements that she was not closely following the trial, Pugh said via social media that she was “well aware” of the “disturbing allegations.”

“I feel the need to clarify the statement which I made during my press availability this morning which has been further distorted,” she tweeted in the statement issued early Thursday morning.

At the Parkway last night, she pointed to positive news about Baltimore from out-of-town media, such as a New York Times story ranking Baltimore as No. 15 on a list of 52 U.S. cities worth visiting.

“But how many times will we hear that story,” she remarked.

Other signs of progress have not been cited in the local media, she complained, saying that violence is down and homicides are down “30% or so” in the city. (This December 6 Brew story reports on the mayor’s charts and commentary about crime reduction.)

“But how many times will we hear that story,” she asked.

She continued, relating her views on the problems facing Baltimore and how she is addressing them. “Has it been unjust? Yes. Has there been inclusion? No,” she said.

“But did we get $10 million on behalf of Bloomberg and Goldman Sachs and others to create and expand business in the city? Yes,” she went on.

“Did we get $10 million to change the lights in this city and provide technology that was not in our police department?” she said to the audience.

After about four minutes, she returned to the purpose of the event, to laud the group of “visionaries.”

“It’s minds like these that sit on this stage and people out there like yourselves who come to learn about visions and things we can do together,” she said.

“Every day I pinch myself that I get to do this work on behalf of all of you,” she added.

She saluted the honorees as people “who believe in the city, who want to be here, who know that we can be a great city,” she said, concluding, “But again, it’s how we move forward together.”