Arguably Baltimore’s most quiescent councilperson will step into the limelight on Wednesday, to be honored by Mayor Catherine Pugh at a “Year of the Woman” fundraising event.

Sharon Green Middleton, who speaks sparingly at City Council hearings and pursues a low profile at community meetings, is to be recognized as one of the women who “make a difference all over the world – in board rooms, classrooms, laboratories, at home, as elected officials and at desks at night,” according to the fundraiser invitation.
_____________________________________
UPDATE: Inclement weather (i.e., predicted snow) has compelled the mayor to reschedule her Year of the Woman fundraiser to April 24, her campaign committee announced this afternoon (3/20).
___________________________________
In the past year, Pugh has noticeably elevated the profile of the 6th District councilwoman, who represents north and northwest communities ranging from upscale Roland Park to struggling Park Heights.

Middleton has been at the mayor’s side during numerous press conferences lately, lending silent affirmation to the mayor’s crime and neighborhood initiatives.

Middleton stood with Pugh in January when she announced the appointment of Darryl De Sousa as the city’s new police commissioner. Three months earlier, her 30-year-old son, Glenard Middleton Jr., was hired as community liaison in the mayor’s office, according to his LinkedIn profile.

Pugh has noticeably elevated the profile of the councilwoman who represents both upscale Roland Park and struggling Park Heights.

Her daughter, Anika Middleton, is an asset manager for the housing department who recently filed to run for Baltimore Circuit Court Clerk. And her grandson, Ryan Crowder, works as a “customer care” analyst at the Department of Public Works.

MORE on the dollars and cents of city government: Off-year campaign contributions roll into City Hall (2/9/18). 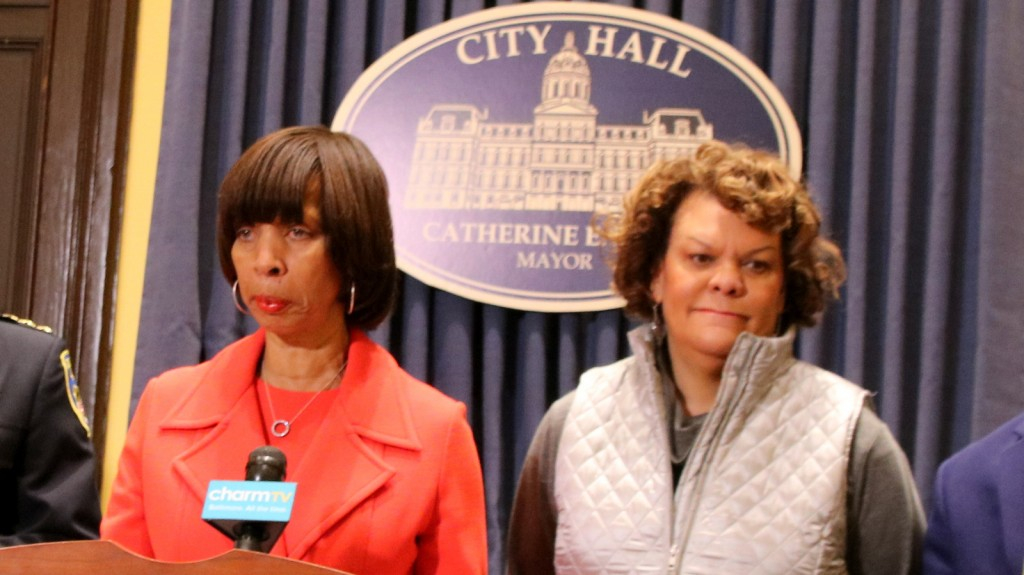 AT HER SIDE: Sharon Middleton with Mayor Pugh at the press conference announcing Darryl De Sousa as Baltimore’s new police commissioner. (Fern Shen)

The mayor currently has nearly $500,000 in her campaign finance account, but has ambitions to raise much more, with a goal of locking up a formidable $2.5 million before the 2020 mayoral race, informed sources tell The Brew.

Wednesday’s event will be held at Accelerator Space, a re-purposed ex-car dealership near Belvedere Square.