But when Schober asked to see a meeting schedule and minutes, she was told there were none.

The meetings are “an internal working project,” not open to the public. And there’s no sign of the task force’s existence on the school system website, either.

The school board chair and a school official both offered to brief her privately on the 22-member task force’s work. And so did one of the group’s members, Matthew D. Gallagher, president of the Goldseker Foundation.

But that was not about to mollify a transparency advocate like Schober.

“There are 80,000 children in city schools with parents and guardians,” said Schober, who yesterday filed a complaint about the task force to the Maryland Attorney General under the Open Meetings Act.

“What matters much more than me getting a meeting and learning about this important work is the ability of all parents to do the same,” she said, speaking with The Brew.

“What message does that send to parents? To me, and to many others I know, it says that we’re an afterthought.”

Another parent pointed to the make-up of the task force, noting that while it is heavy on foundations and school board members, it includes “no identifiable grassroots or Black-led organizing entities.”

“The core question is whether or not City Schools leadership believes everyday families and grassroots organizers have a right to weigh in on their most critical decisions and policy making at the formation stage,” said Khalilah M. Harris, a former Obama administration official and education justice advocate.

“There has been no proof of any kind that the non-profit industrial complex and business community know what’s best for Baltimore’s children, much less know better than their parents,” Harris added.

Along with Jeff Breslin, of Under Armour, and Donald Manekin, of Seawall Development, the task force includes a representative from the Goldseker Foundation, another from the Fund for Educational Excellence and several affiliated with the Baltimore Community Foundation.

Johns Hopkins University is represented by special advisor to the president, Andrew B. Frank, and Mayor Catherine Pugh by her director of government relations, Karen Stokes. The Parent Community Advisory Board and the Associated Student Congress of Baltimore City each have a representative. 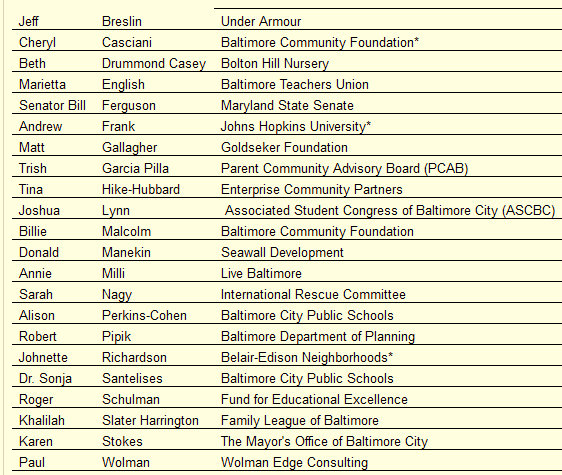 The task force members will be bringing representatives of the city’s largest foundations up to date on their work today, when they are scheduled to make a presentation to the Association of Baltimore Area Grantmakers.

But the public won’t be told about the findings until sometime in June, when the task force will appear before the School Board, officials say.

“When the Board decides that something like an Enrollment Task Force is internal unless you’re a philanthropist who happened to pay dues to ABAG, what message does that send to parents?” she said. “To me, and to many others I know, it says that we’re an afterthought.”

“Not a Policymaking Body”

Asked about the origins of the group, schools spokeswoman Edie House-Foster said that “following several years of declining enrollment,” City Schools CEO Sonja Santelises created it “to develop strategies for an enrollment campaign.”

(“Initial members were suggested by the CEO, Board Chair, and members of the Mayor’s team,” said Joe Straaik, liaison to the Board in the Office of the CEO, in an email to Schober.)

The task force has met twice – November 15 and February 6.

According to House-Foster, it oversees three subcommittees reporting back with strategies about public relations and marketing, retention, and customer service. These additional participants represent “both the city schools community and the broader Baltimore community,” House-Foster said.

Why aren’t the group’s meetings public?

The task force is “a research and fact-finding group” that was “not convened by the school board and is not a a policy or decision-making body,” Schober was told via email by school board chair Cheryl A. Casciani, who is also director of special projects at the Baltimore Community Foundation.

“The CEO frequently confers with a wide variety of stakeholders on matters that affect the entire City Schools community,” she said.

“These groups, including the Enrollment Task Force, are not policy-making bodies, nor are they convened by the Board of School Commissioners,” she continued. “As such, their work does not fall under requirements of the Open Meetings Act.”

Legal requirements of the Act aside, the issue of school enrollment in Baltimore is politically sensitive and racially charged, with the shuttering of neighborhood schools amid demolition, displacement and development the source of longstanding community anguish.

And it all takes place against the backdrop of continued enrollment decline and city population loss.

The data were reviewed at a public presentation that staff made to the school board’s operations committee on November 21 in which the enrollment task force was mentioned. 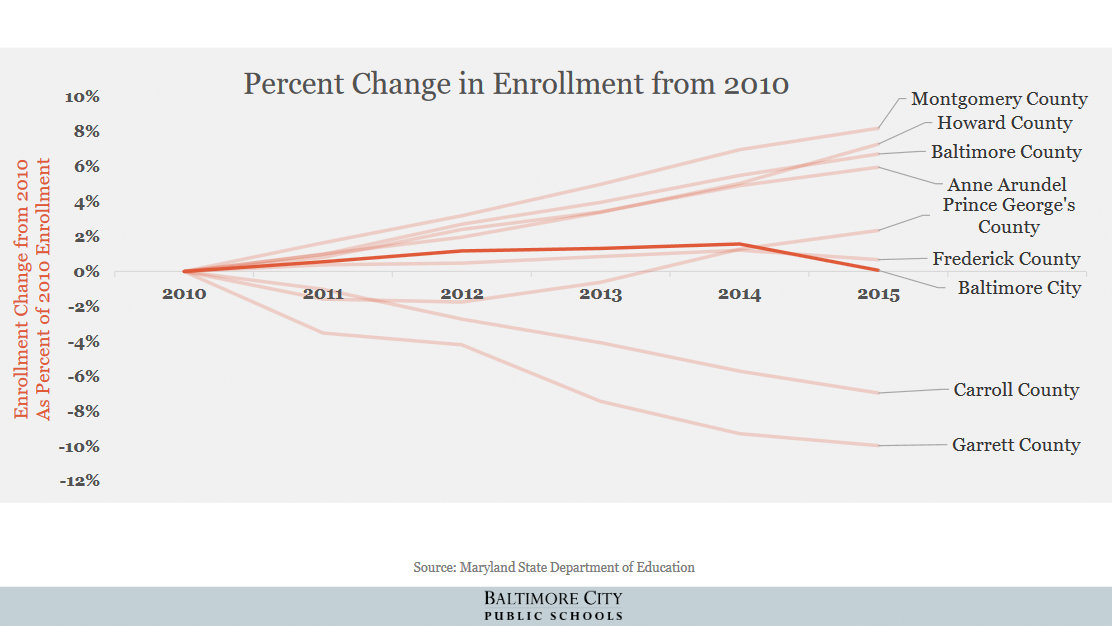 Enrollment change since 2010 as a percent of 2010 enrollment . (Baltimore City Public Schools)

Enrollment has dropped to its lowest level in 10 years – about 80,590 students, down from 82,350 last year, according to the Maryland State Department of Education.

Schober noted that the city is projected to lose another 1,700 students over ten years according to a rezoning feasibility analysis compiled earlier for BCPS.

She said she was concerned about the quality of that analysis (It did not appear to her, for example, to take into account the offsetting effect of immigration) and about other conceptual gaps in the structure of the task force.

“Alarming, there is no Hispanic/Latin@ organizational representation even though that is the only demographic group with rising enrollment — now surpassing white students,” she said.

“If you are a research group, I’d respectfully inquire as to the Task Force’s ability to collect qualitative and quantitative data across many demographic groups, ideally over several years,” Schober wrote to Casciani.

“Do we know why parents chose to enroll, then depart, and in some cases re-enroll?” she said. “I’ve not heard any evidence that we have a good handle on why, apart from conversational anecdata shared among parents in various social circles.”

Harris agreed that the enrollment issue is complicated.

“It certainly isn’t one the District alone should be tackling – elected officials are also on the hook for this,” Harris said, citing the impact of the cancellation of the Red Line on city neighborhoods.

“The enrollment issue is a housing, jobs, and transportation issue, as much as it is an issue about the quality of schools for all students,” she said.

“Unfortunately, a backroom conversation won’t accomplish innovative solutions for attracting and keeping families in our schools, when it’s only taking place between people who have had the seat of power for decades.”