On his first day as acting police commissioner, Gary Tuggle  filed a city ethics statement on Friday that – twice – listed his home address as Baltimore, Md.

Reached this evening by The Brew, Tuggle said, “It should have stated Upper Marlboro. It’s obviously an error on my part.”

Asked how such an error could happen, he recalled that he had used a pull-down screen to list his address. “So why would it do that? Come up as Baltimore, Md., when the actual [street] address is correct?

“You know what I did,” he continued. “I went to the pull-down screen for the state, probably not the county.”

The Baltimore City Code states that all department heads “shall be residents and registered voters of Baltimore City at the time of their appointment.”

It is unclear whether that requirement covers acting department heads such as Tuggle. But Mayor Catherine Pugh has frequently vowed that all top city officials must live in Baltimore.

Asked directly by The Brew, “Have you been told, as acting commissioner, that you need to live in the city,” Tuggle did not answer, but instead told the reporter to contact BPD’s chief of communications, Matt Jablow, for guidance.

In Friday’s filing, Tuggle failed to submit six schedules that are part of the mandatory ethics report.

“I didn’t realize that,” Tuggle said about the schedules. “I will go back and take a look.”

He did, however, submit a schedule titled “Interests in Real Property.”

In that form, Tuggle provided the street address and zip code that corresponded to his Upper Marlboro house, but it states that the property is located in “Baltimore MD.”

The same mix of correct and incorrect information could be found on the cover page of his ethics report (SEE BELOW). 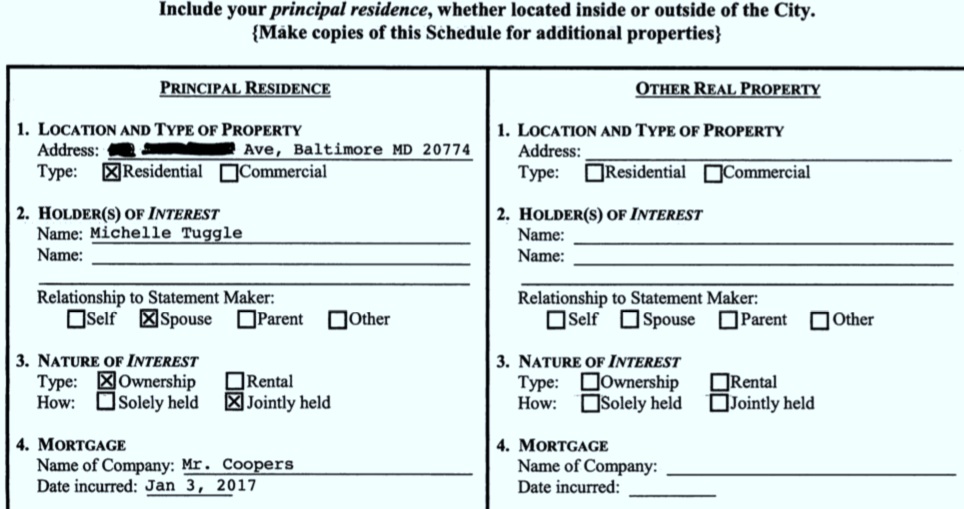 Asked on this form whether his principal residence is “located inside or outside of the City,” Tuggle’s answer was “Baltimore MD.” The Brew has redacted his exact address for security reasons. 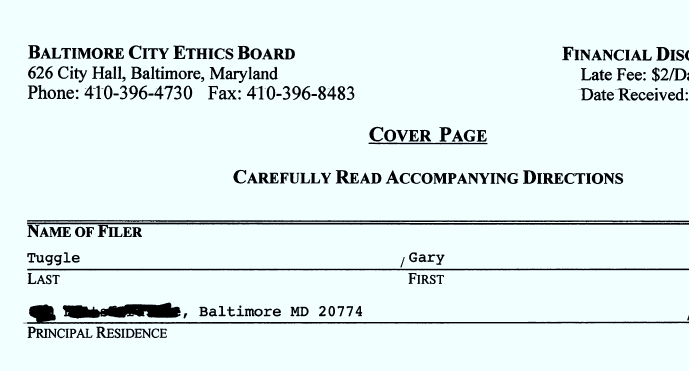 The opening page of his report also lists “Baltimore MD” as his place of residence.

As a new employee, Tuggle was required to file an Entry Report with the ethics board within 30 days.

Tuggle did not file the report. Nor did he submit his annual disclosure report due on April 30.

When he did file the report yesterday (May 11), Tuggle used an online form that was not signed in the presence of a notary. [UPDATE: Thaddeus Watulak, deputy ethics director, said the online form has an “e-verification” feature that eliminates the notarization process.]

Tuggle swore the contents of his statement “are true to the best of my knowledge, information and belief . . . under penalties of perjury.”

ABOVE: The Part D paper copy of the ethics form that needs to be signed and notarized. BELOW: The online form that Tuggle submitted on Friday, which ethics officials say is acceptable because of an e-verification feature.

“I did it all on the Internet,” Tuggle explained today, “so I could not have signed it.”

Tuggle is a Baltimore native who started out as police officer in the Western District. Judiciary Case Search records indicate that he worked for BPD from 1986 to 1992, when he joined the DEA.

Over a 25-year career, Tuggle was assigned to many posts, including in Barbados and Trinidad, where he engaged in stopping “high-level drug trafficking and organized criminal enterprises,” according to an online profile.

He was in charge of the DEA’s Baltimore District Office during the civil unrest that followed the death of Freddie Gray.

In subsequent media interviews, Tuggle said that the looting of city pharmacies had led to an massive influx of prescription drugs on the black market, accompanied by rising violence.

Tuggle retired from the Philadelphia Office of the DEA at the start of this year. As the Gun Trace Task Force trial was underway, exposing how the squad had robbed citizens and stolen drugs with impunity, Tuggle was approached by De Sousa to become a deputy commissioner and oversee the Internal Affairs Bureau.

Casella withdrew after records, leaked to the media, indicated that he had a long history of complaints for misconduct and racial profiling.

On Friday, De Sousa was himself suspended by Mayor Pugh after federal prosecutors filed criminal misdemeanor charges against him for failing to file tax returns for 2013, 2014 and 2015.

The U.S. attorney’s office says its criminal investigation of De Sousa will continue.