For attendees, Baltimore’s Preakness may be a beloved, once-a-year spring celebration of horse racing, natty dressing and day drinking.

But for the Baltimore Terps youth sports program, which uses a field just up the road from Pimlico Race Course, the Preakness has been an annual nightmare.

That’s because for the two main days of the event, cars, buses and trucks are allowed to park on the city-owned fields where children in the program play lacrosse and football.

Attendees and employees leave behind deep ruts and craters, not to mention trash and, by several accounts, assorted body fluids.

Parents and other volunteers then have to spend weeks repairing the field, located next to a former school building that is now the Baltimore City Public Safety Training Academy.

This year, after heavy rains had made for two especially bad years of ruts and craters, Terps founder Kweisi Ehoize thought he had solved the problem.

A different location for the parking was identified, the nearby MTA Metro lot at Rogers Avenue.

Councilman Isaac “Yitzy” Schleifer, whose help Ehoize had enlisted, told him the city Department of Recreation and Parks was on board and that a local official with the Maryland Jockey Club had agreed to the plan. 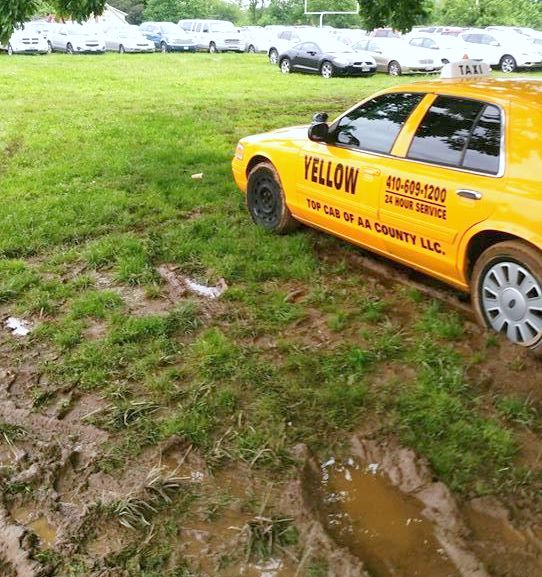 Some of the worst damage to the field was caused by a taxi stuck in the mud last year. (Baltimore Terps)

But last week, Schleifer told him it wasn’t to be.

“He said, ‘I’m sorry, man. It looks like we got overridden somewhere high up in the mayor’s office,’” Ehoize said.

Late today, after a social media campaign by Ehoize and multiple calls by The Brew to Schleifer, Mayor Catherine Pugh’s office and track owner The Stronach Group – Ehoize was told that cars will not be parking on the sports field this Preakness weekend.

“I am so relieved,” Eloize said after getting the word. “They are going to make them go to Rogers Avenue. It’s back on!”

Schleifer told him that city employees would be positioned at the field to make sure no cars park there.

[UPDATE 5/18/18: Ehoize said a Recreation and Parks employee was stationed at the field this morning to make sure no one parks there. I think they were the recipient of a lot of ire.”]

First contacted by The Brew last night, Schleifer did not return several calls seeking comment. Nor did Mayor Pugh’s spokesman.

Showing a visitor around the field earlier this week, Ehoize pointed out some gashes in the ground and grassless patches caused by Preakness parking last year. He said that several children have since tripped and twisted their ankles at these spots.

Schleifer did not return several calls seeking comment. Nor did Mayor Pugh’s spokesman.

“There were huge ruts, some that were a foot deep, last year. It’s what happens when people get stuck in the mud and start spinning their wheels,” he said.

“We had to get fill dirt. Luckily, one of my parents is a contractor who came here and we tried to level out and fill in what we could. Just to make it playable.”

Founded in 2012, the Baltimore Terps offers recreational football, lacrosse, basketball and cheerleading for over 350 kids, ages 4-14.

The group receives no city money and is self-funded, paying for equipment and officiating through participants’ fees, grants and fundraising activities like food stands at games.

He pointed to the portable toilets and light towers, all paid for by his organization. “All Rec and Parks does is cut the grass,” he said.

A spokeswoman for Recreation and Parks confirmed tonight that the field will be off-limits for Preakness parking. 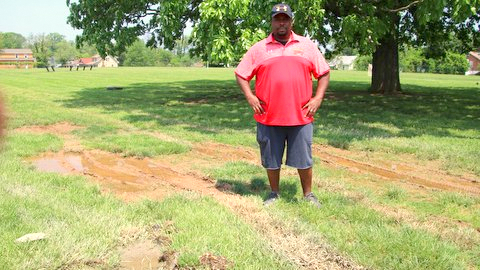 Kweisi Ehoize, director of the Terps sports program, points to damage that remains on the field from last year’s Preakness parking. (Fern Shen)

The use of the field for Preakness parking has long been a contentious issue in Northwest Baltimore, where the field is one of the few green, recreational spaces for children from the Park Heights and Pimlico neighborhoods.

“Every year, they say they won’t do it, but every year they always trash it,” said Derrick Lennon, former president of the Glen Neighborhood Improvement Association.

In the past, the Jockey Club has promised to repair the field after Preakness, but has only done a superficial job, according to Ehoize.

“Last year, they ran an aerator over it, threw down some straw, and that’s it,” he said. “They did no seeding. They didn’t fill in the holes”

Rec and Parks, likewise, had done little to repair the field, he said, noting that both parties’ assistance typically came too late in the summer for any new grass to grow in time for football practice, which begins in July.

For years, the Glen community has been promised a better field.

“So is the city going to let these cars come in and wreck the field after doing all that work,” Ehoize wondered. 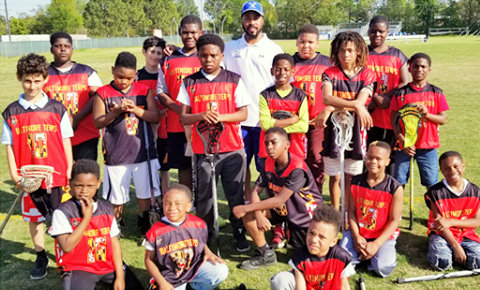