The former Strawbridge United Methodist Church has plenty of ingredients for a successful conversion to residences.

But there’s one problem that threatens to make any conversion difficult for both the developer and the surrounding community:

Because buildings cover almost all of the land, there is no room for on-site parking to accommodate potential tenants, and on-street parking is already tight in the surrounding area, especially at night.

The lack of parking became a source of concern for neighboring residents after the developers recently disclosed that they want to convert the church into luxury apartments, but have no solution for parking.

It turns out that the developer doesn’t need to come up with any solution.

For nearly half a century, Baltimore’s zoning code required developers of multi-family projects to provide at least one parking space per residence unless they got a waiver from the zoning board.

But the new TransForm Baltimore code, which went into effect last June, allows the one-for-one parking requirement to be waived for such projects as church conversions.

The new code does not automatically waive the requirement to provide on-site parking, but it gives the city’s planning director the authority to do so.

And that’s what Planning Director Thomas Stosur did in the case of Strawbridge Church.

There are fewer than 10 developments citywide where on-site parking requirements have been waived since TransForm Baltimore was adopted, which makes Strawbridge something of a test case for how well the policy change is received and how well it works.

During a community meeting held inside the church earlier this month, quite a few residents warned that constructing apartments at that location without providing off-street parking for the occupants would make the parking situation worse for everyone.

Several warned the developer that the absence of dedicated parking could make it harder to rent the apartments, no matter how attractive they are.

“The question is, how far are you willing to walk in the dark in the neighborhood by yourself,” said Park Avenue resident William Heaps.

“This neighborhood is parked to the gills,” another resident complained.

But others argued that the project deserves support from the neighborhood because it will preserve a prominent structure that has been vacant for years, while adding more “eyes on the street” to help keep down crime.

Several suggested that off-street parking could be created within 600 feet of the church, possibly by sharing a parking lot with the Save-A-Lot and Rite Aid stores on McMechen Street, or by using land controlled by the Maryland Institute College of Art off North Avenue. 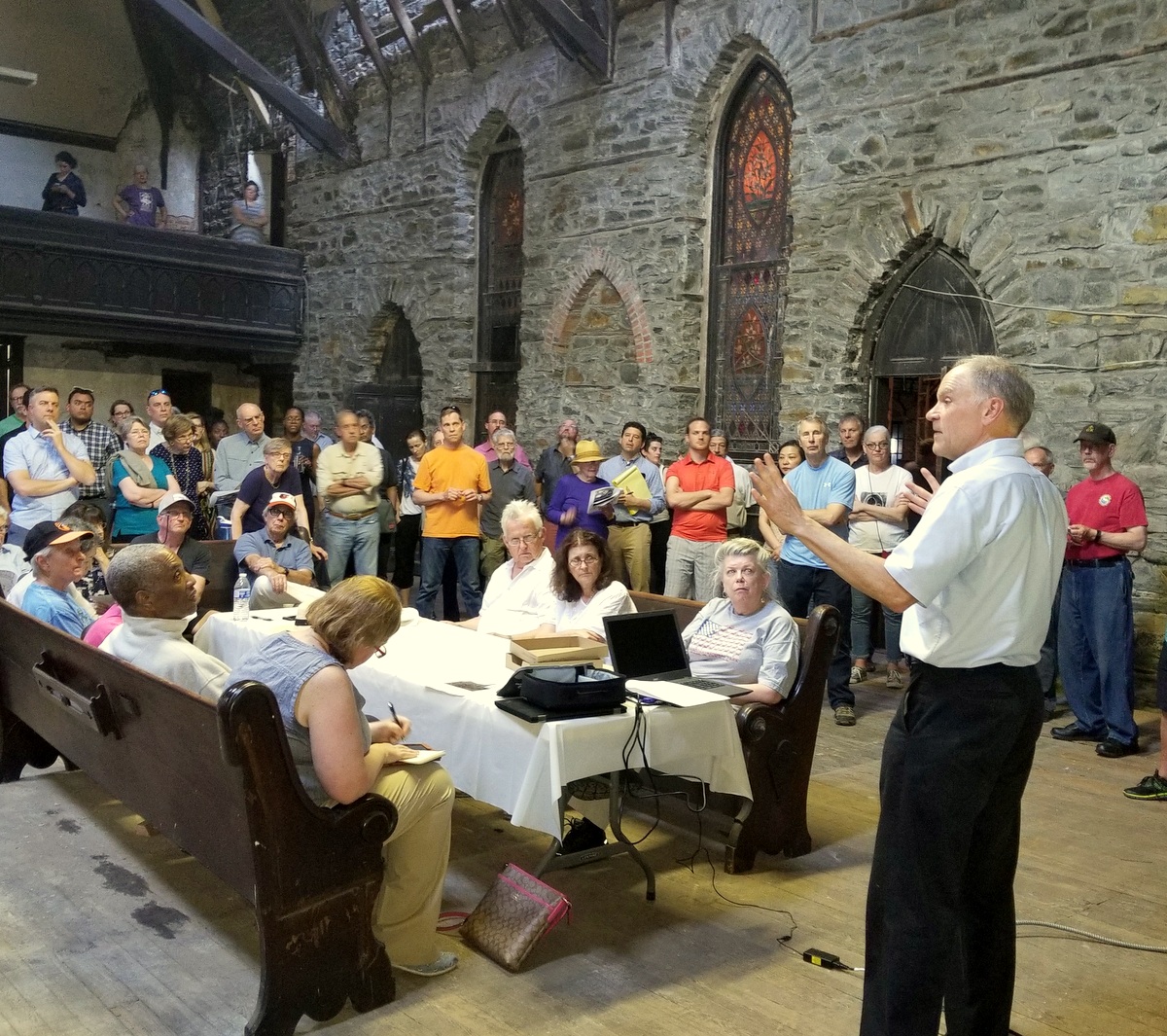 “I wish we would shift our focus of attention from parking to trying to save the building,” said Thomas Shipley, a Mount Royal Avenue resident.

All Structures to Remain

The neighborhood meeting drew more than 50 people, including many board members of the Bolton Hill Community Association (the new name for the Mount Royal Improvement Association).

Frederick said the development team seeks to convert the church property to 11 market-rate apartments that would rent for $1,700 to $1,900 per month.

All of the structures on the site would be preserved, including the original church that dates from around 1880, the main sanctuary built around 1885, a former parsonage and a smaller back building. 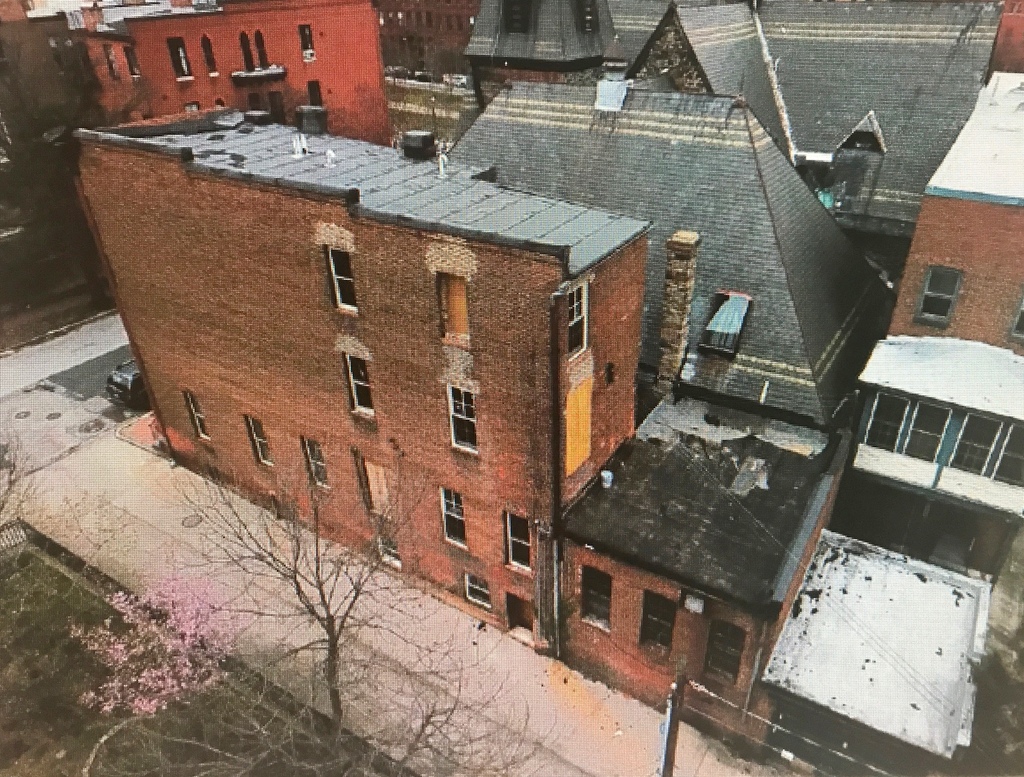 The church parsonage (at left) and other buildings are packed between the original church and Jenkins Alley. (Bolton Hill Belfry LLC)

Plans call for four loft-style apartments in the original church, four in the main sanctuary, two in the parsonage and one in the back building

“Parking is going to be an issue, no doubt about it,” Frederick agreed. “We have not been able to come up with any ideas for what to do about parking.”

Neighbors noted that other multi-family residential projects in the neighborhood, including the Beethoven Apartments one block away, are required to provide off-street parking for residents.

The parking waiver for the Strawbridge project is spelled out in Section 16-601 of the new zoning code, called Article 32.

“Structures over 50 years old or structures that have received an historic tax credit are exempt from the parking requirements, subject to review and approval by the Director of Planning, if they have not historically provided parking and they lack sufficient space on the lot to accommodate parking,” the section states in part.

According to Laurie Feinberg, assistant planning director, the language  was drafted “to encourage preservation of buildings and, more importantly, to encourage reuse of buildings that might otherwise be challenged.”

Even under the old zoning code, the city might not have required off-street parking for the church conversion, said planner Martin French, who noted that some churches were never required to provide on-site parking spaces.

At the community meeting, Frederick said that Stosur’s parking waiver was a key to making the conversion possible. Otherwise, the developer was faced with tearing down an existing structure, which, he said, wouldn’t likely be approved because the area is a historic district. 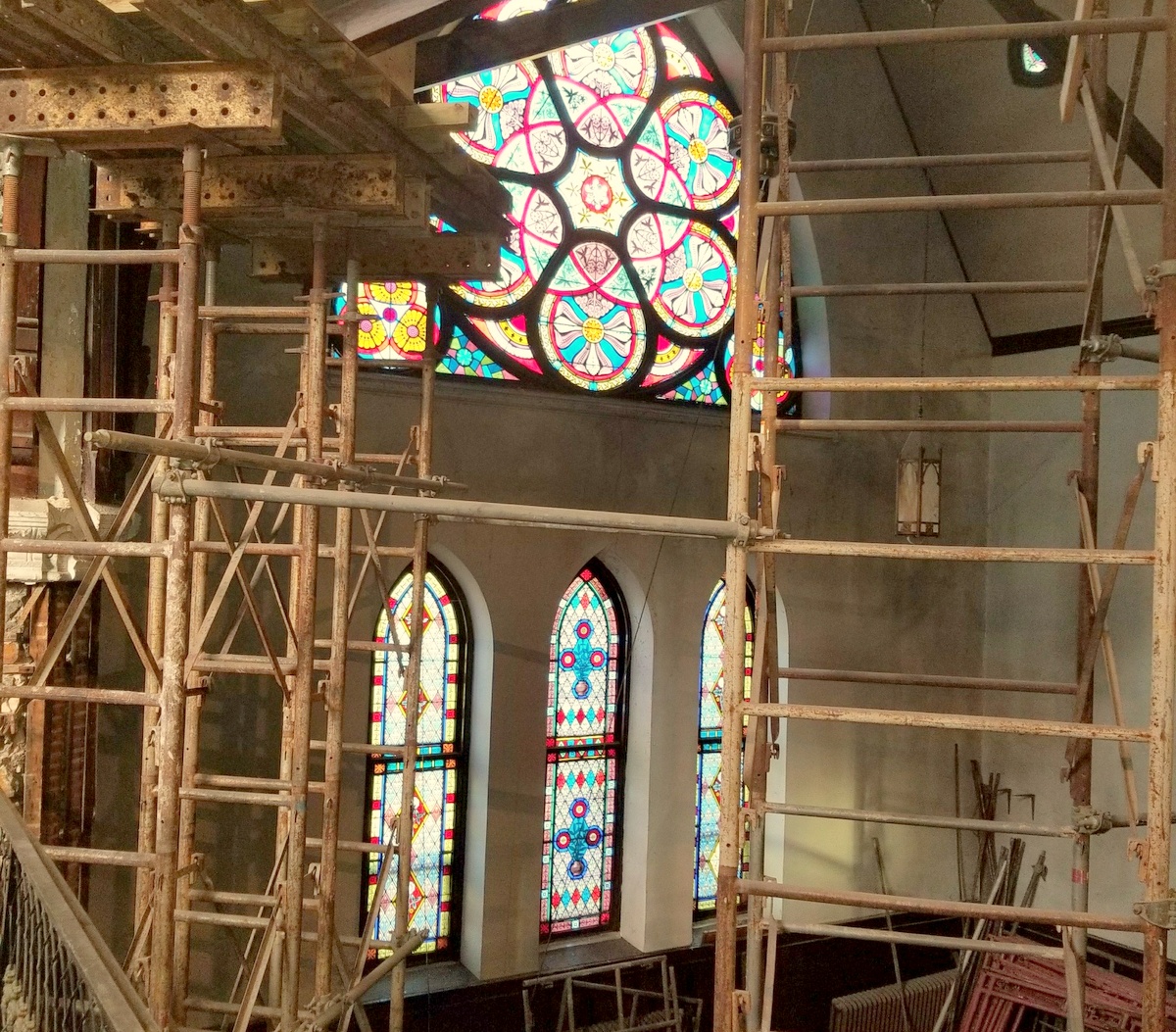 Scaffolding partly blocks the original stained-glass windows. The church property was purchased by the development team in 2015. (Ed Gunts)

On June 12, the Board of Municipal and Zoning Appeals will hear the Strawbridge case – not because of the parking controversy (Stosur’s waiver has settled that), but because the developer wants 11 apartments in an R-7 zoning district.

Nine apartments could be carved out of the church complex without a zoning appeal, but the team wants to create two more units and the zoning code does not automatically allow that because of the lot size.

At the May 3 neighborhood meeting, several residents debated whether to “vacate” the Bolton Hill Community Association’s April endorsement of the project.

At the end of the meeting, the BHCA board, in a close 13 to 10 vote, decided to stick with its previous position.

Board President Linda Rittelmann encouraged residents who have concerns about parking to attend the zoning hearing and express their views.