City prosecutors announced today that former Baltimore police officer Arthur Williams, who was caught on video beating a man over the weekend, has been criminally charged.

A grand jury returned an indictment against Williams, charging him with first- and second-degree assault and misconduct in office, Baltimore State’s Attorney Marilyn J. Mosby said.

Cellphone video shows Williams repeatedly punching 26-year-old Dashawn McGrier in the face and head last Saturday morning, tackling him to the ground and holding his head against the sidewalk as blood pools.

As another officer watches without intervening, McGrier tries to fend off the blows, but does not fight back. The second officer has not been charged.

The incident occurred on the 2500 block of East Monument Street when Williams was on duty.

After the video went viral, stirring outrage locally and nationally, BPD suspended Williams with pay and assigned the other officer to administrative duties pending an investigation.

Asked Monday why he acted so swiftly, Tuggle said that he was upset by what he saw on the two videos he viewed.

“The repeated head strikes are disturbing,” he told reporters.

In a press release, Mosby said the case will be prosecuted by her office’s Police Trust and Police Integrity Unit under the direction of Stacy Ann Llewellyn. 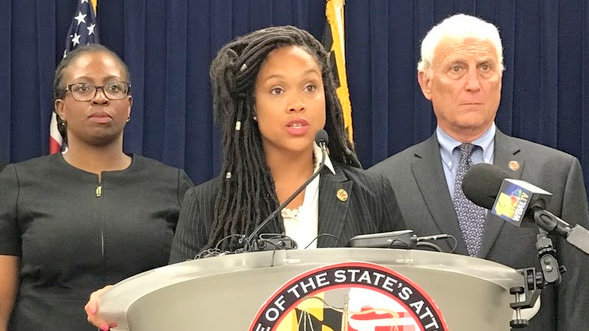