Last Friday, The Brew identified Molly McGrath Tierney and the Family League of Baltimore as the unnamed subjects of a state audit report that disclosed serious financial irregularities at the Baltimore Department of Social Services (DSS).

Among its findings, the Office of Legislative Audits reported that an “out-of-state vendor” had received $1.3 million under an agreement struck by Tierney, then-DSS director, with the Family League.

Payments to the vendor went undetected for eight years, according to the audit and two sources with knowledge of the arrangement.

The vendor would fly to Baltimore about once a month, confer with Tierney and occasionally produce some minor administrative work, such as updating DSS’s email and phone listings.

For this work, the vendor received as much as $195,000 a year – money intended for foster care and adult addiction programs – according to the audit.

So who was the recipient of this hidden largess that is now under review by State Prosecutor Emmet Davitt?

The audit does not name the individual, but a preponderance of evidence, including an online resume [since altered], points to Mona R. Patel, a longtime friend of Tierney’s.

The two had worked together at the Chicago Department of Human Services in the early 2000s when Tierney, a Chicago native, was CDHS deputy commissioner and Patel was a senior data analyst.

According to an online document, they jointly administered a federal grant program, called “The Service Connector,” that offered case management services to public housing residents in 2003 and 2004.

Tierney (then known as Molly McGrath) ran the program, while Patel collected data and conducted a monthly analysis of outcomes.

Tierney ran a case management program for public housing residents that was reviewed by Mona Patel. (“The Service Connector,” 2004)

In Chicago and, before that in Washington, D.C., Tierney built a reputation as a child welfare reformer with credentials burnished by her close association with the Baltimore-based Annie E. Casey Foundation.

In February 2008, Tierney was recruited to DSS as chief operating officer following a scandal involving a toddler who had died from ingesting methadone.

In announcing her appointment, Mayor Sheila Dixon heaped praise on Tierney as a crusader for underprivileged and sometimes hungry kids. “She’s no-nonsense. She’s got a strong background in child advocacy,” Dixon said.

The same year that Tierney took over Baltimore DSS, Patel quit her job at Chicago’s budget office and became an “independent consultant” for DSS, according to Patel’s LinkedIn profile [since altered].

Very few people knew of Patel’s existence, a former DSS employee said, and those who did knew her simply as “Molly’s Chicago friend.”

“She came in, asked for data and turned it into reports. Molly flew her in every month. They would put her in hotels and have dinners,” the former employee said.

While Patel worked exclusively for Tierney, according to the audit report, she was not paid directly by the agency.

Instead, The Brew found, Patel formed the “Monski Consulting Corp.”

DSS and the Maryland Department of Human Services should review the invoices and claw back payments that were improperly made, the audit report says.

This one-person firm (both the president and secretary are listed as Mona R. Patel in Illinois corporate records) was paid a salary and expenses by the Family League, Baltimore’s quasi-public child welfare organization.

The Family League then folded the fees they paid to Monski Consulting into invoices it submitted to DSS.

In this way, Mona Patel’s fees were hidden in expenses ostensibly going to programs aimed at curbing substance abuse among parents of vulnerable children.

The purpose of the arrangement, the audit states, was to “circumvent state procurement rules” that require that service contracts over $25,000 be competitively sourced.

The audit says DSS and the Maryland Department of Human Services should review the invoices and claw back payments that were improperly made.
________________________
We tried to contact Mona Patel (also known as Monski Patel) through her Facebook page, through Monski Consulting Corp. and through BMO Financial Group, where she now says she works as a senior compliance officer. She did not respond to our email messages. Failing to reach her at BMO Harris Bank in Chicago, we contacted BMO’s Montreal, Canada, media relations office – to no avail.

Molly Tierney said last week that she could not comment on the audit report because she had not seen it. We emailed her a copy of the report and haven’t heard from her since.

The Family League acknowledged on Sunday that it was the nonprofit cited in the audit report. Demaune Millard, a former Sheila Dixon aide who now runs the League, said in an interview that he was unaware of  the pass-through arrangement with the vendor. (He said he was not at liberty to divulge the vendor’s name because of “an on-going investigation.”) “It never came up” in budget discussions he had with CEO Jonathon Rondeau, who resigned last summer. Rondeau, now head of The Arc Central Chesapeake Region, declined to answer questions about the audit.
_________________________

A Friend at Family League

The first agreement came after the Family League had hired a new CEO, Rafael Lopez, a West Coast transplant who had been active on a Los Angeles child welfare commission.

Family League agreed to pay the vendor (Monski Consulting) $125,000 a year, plus $15,000 in travel expenses, according to the audit report.

Lopez then renewed the contract with Monski Consulting at least once before he joined the Annie E. Casey Foundation as associate director.

Today Lopez and Tierney are co-workers at the health and human service division of Accenture North America, a professional services consulting firm.

According to Tierney’s Facebook page (her LinkedIn page has been disabled), she and Lopez shuttle around the country, advising government groups and nonprofits about management strategy and the delivery of social services. 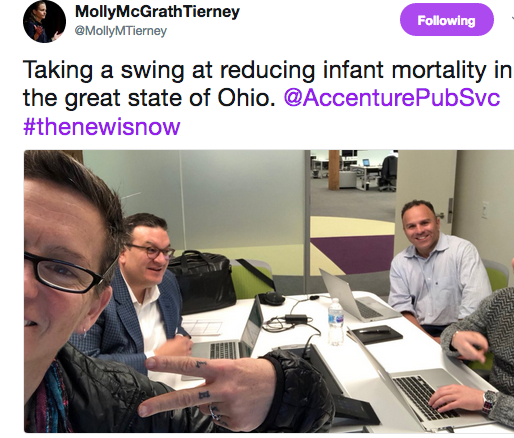 Once again, the money went to Monski Consulting and was billed back to DSS as legitimate expenses for services rendered to needy children and families.

The same terms of pay were renewed by the Family League for the next four years until the contract was suspended late last year.

Once again, the money went to Monski Consulting and was billed back to DSS as legitimate expenses for services rendered to poor and disadvantaged children.

In trying to discern what DSS got in return for the $1.3 million it paid for the consulting services, state auditor Thomas Barnickel said he could find few examples of any work product.

In one case, the vendor was paid $4,935 to analyze DSS vacancies. In another, staff email and phone listings were updated at a pay rate of $105 an hour.

Outside of these scattered records, “there was no documentation to support either the initial rates paid to the vendor or the subsequent increase,” the audit report said.

These findings differ from what Patel described as her contributions to Baltimore’s child welfare system.

Screenshot of Mona Patel’s description of her work in Baltimore. (LinkedIn)

“Oversaw the improvement and standardization of the child welfare system comprised of four programs with 350+ staff and supervisors,” her LinkedIn profile says.

She also said she “created and delivered business cases to management with data-driven solution recommendations.”

By way of contrast, the audit report includes this paragraph about the value of her services:

Reached last Thursday, Tierney said she could not comment on the vendor contract or respond to other allegations in the audit  because “this is the first I’ve heard about it.”

The Brew provided Tierney a copy of the audit report, and she has not responded to any questions regarding its allegations. 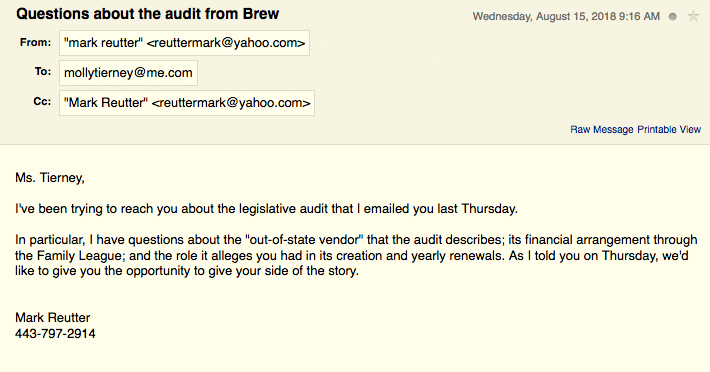 To reach this reporter, see email address and phone number above.