The selection of Crystal City, Virginia, as Amazon’s HQ2 offers Baltimore, Washington and northern Virginia an opportunity to create a first – a high-quality regional rail network similar to the systems found in Paris, Berlin, Zurich and other European cities.

So argues Matthew Yglesias in a provocative article posted in vox.com over the weekend.

Trackage at Union Station allows run-through service, which Amtrak takes advantage of in its long-distance rail service between New York City and North Carolina and Florida.

“The most expensive parts are already done,” Yglesias writes.

But for daily commuters, there’s the bureaucratic barrier of two state-run systems that, operationally, could be merged to give “Maryland residents direct access to Virginia job centers, while giving Virginia residents the ability to reach BWI Airport and the City of Baltimore.”

Yglesias, a veteran economics and politics reporter, outlines how the two systems could be folded into what he calls “Chesapeake Bay Regional Rail.” 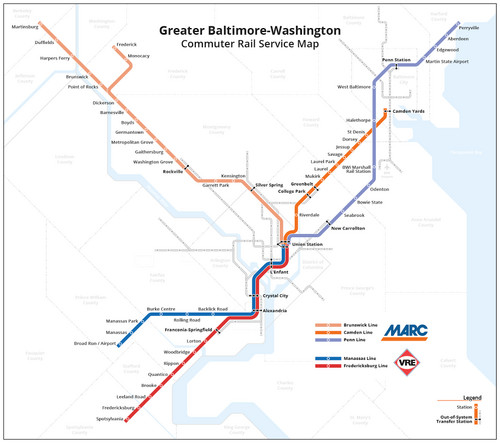 With track, trains and signaling systems already in place, train service between Baltimore and, say, Alexandria or Lorton, Virginia, could be instituted quickly.

Longer-term improvements, such as high-level platforms and electrification of VRE lines, could coincide with the explosion in travel expected with the opening of the Amazon center, which is located near an existing VRE station.

Breaking the taboos of state-controlled systems likely would be more challenging than these infrastructure improvements. But there are regional port and airport authorities that provide ready templates for setting up a Chesapeake Bay rail system.

The end result would be both cheaper and less disruptive than building new highways or rail lines from scratch, according to Yglesias. After all, “the most expensive parts are already done.”