An elevated section of sidewalk on East 26th Street was observed slumping this morning and, as officials and reporters stood by and watched, continued to sink by several inches, The Brew has learned.

The evidence of instability has heightened fears of a potential repeat of a wall collapse two blocks away on 26th Street that sent parked cars, light poles and trees careening into the railway gully in 2014.

Earlier this morning, several residents reported that the sidewalk on the south side of East 26th Street, between Calvert Street and Guilford Avenue, shifted downwards toward the tracks.

About two hours ago, a CSX Transportation official disclosed that a crack had appeared on the 30-foot-high retaining wall that carries the street above the tracks.

Although the wall has bulged outward in several locations, the official told Councilman Robert Stokes Sr. that the area is “secure.”

Since then, the Baltimore Fire Department determined that the sidewalk continued to move toward the railway gully as rain pelted the area. As bystanders watched, sections of the sidewalk buckled and lifted. 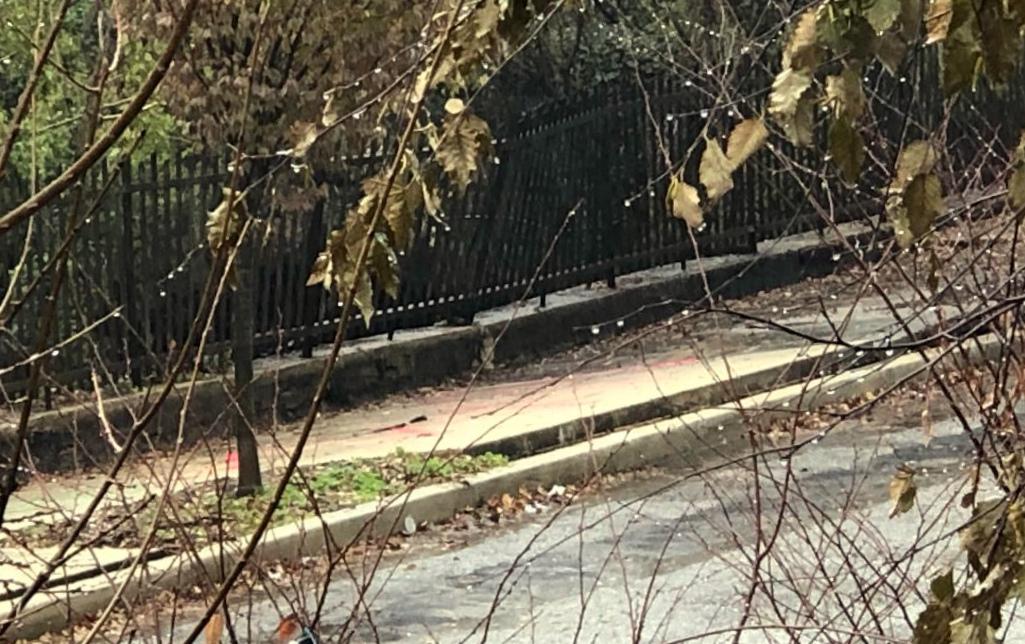 Closeup of a portion of the sidewalk that slanted into the wrought-iron retaining wall above CSX tracks on East 26th Street near Calvert Street. (J.M. Giordano)

Meanwhile, fire officials are warning residents in nearby houses that they should be prepared to evacuate.

Visiting the site this afternoon, Mayor Catherine Pugh said CSX and city officials are assessing the situation. She said they will “make sure everyone is safe.”

Stokes said CSX officials told him they are not sure if the heavy rains of recent days have contributed to the instability of the wall.

Another possible source of trouble is a city water-line repair project underway on Guilford Avenue, which may have introduced water into the subsurface of 26th Street, Stokes was told. 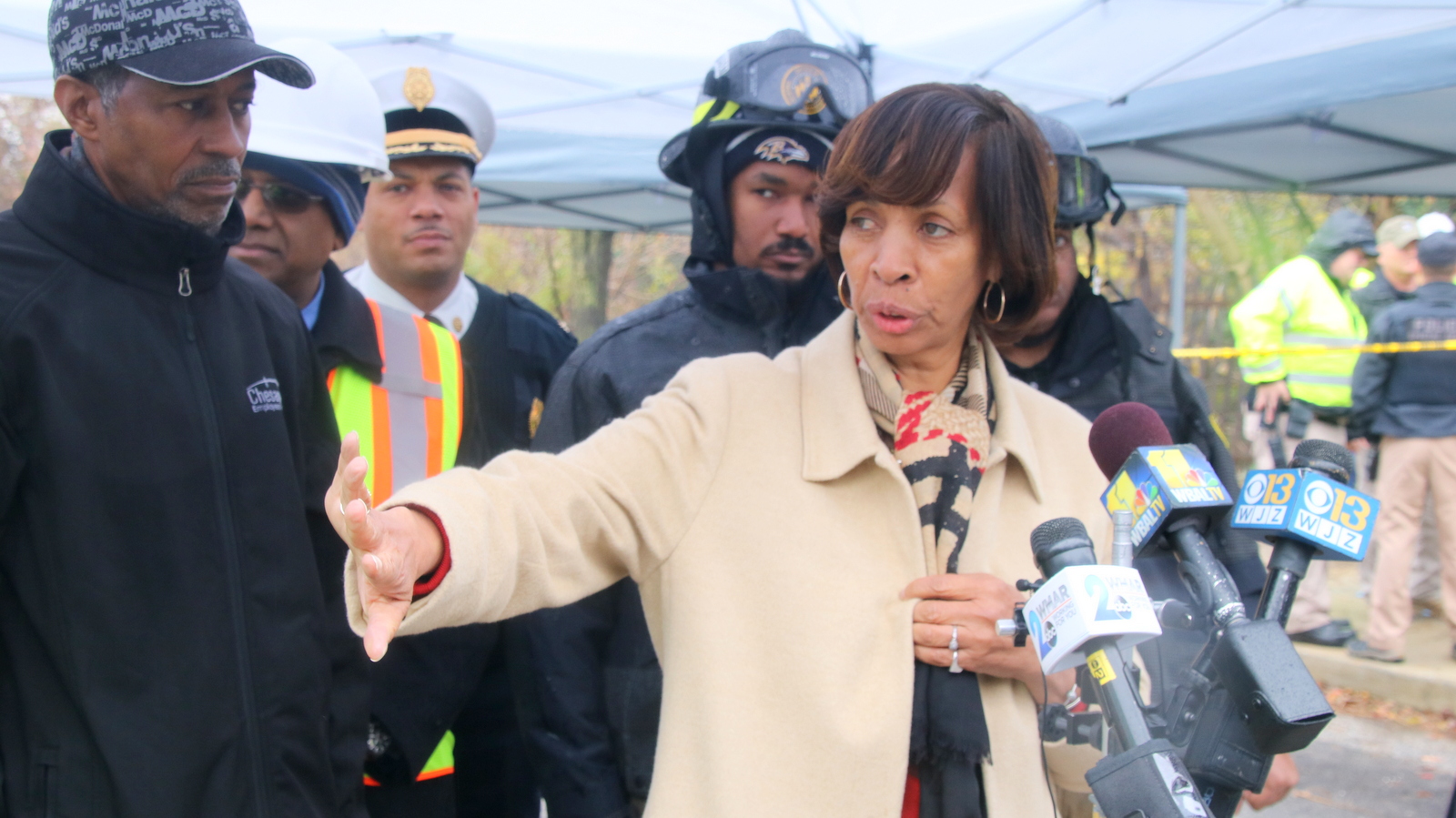 Mayor Catherine Pugh speaks to reporters near a part of the street that began sinking today. (Fern Shen)

The unfolding scenario has eerie parallels to the days before the April 30, 2014 collapse of 26th Street two blocks to the west, between Charles and St. Paul streets.

There, after heavy rains saturated the roadway surface, the 100-year-old retaining wall collapsed, taking cars and a portion of the roadway into the railway below.

CSX and the city agreed to maintain the status quo by rebuilding the retaining wall as well as the unit block of East 26th Street at a total cost of $15 million, including for consultants and a payout to impacted residents.

The retaining wall now under stress was partly built by the Baltimore & Ohio Railroad, a predecessor of CSX, around 1900. An additional, higher wall was built by Baltimore City.

In the 1990s, a section of the wall, near Guilford Avenue, was rebuilt after it started to buckle and sag.

Under an agreement with the city after the 2014 wall collapse, CSX and the city agreed to conduct structural inspections of the line’s right-of-way between Sisson Street and Greenmount Avenue through Remington and Charles Village.

The city Department of Transportation said it would also undertake inspections of the infrastructure “with a goal of prioritizing areas of concern within the next 12 months.”

Craig Bettenhausen, who lives on Guilford Avenue, said people are angry that CSX has not taken steps to repair the retaining wall or clean up the standing water that forms between the wall and the railway track even in dry weather.

“After what happened in 2014, they told us they were going to check everything,” Bettenhausen said today. “Obviously, they haven’t.” 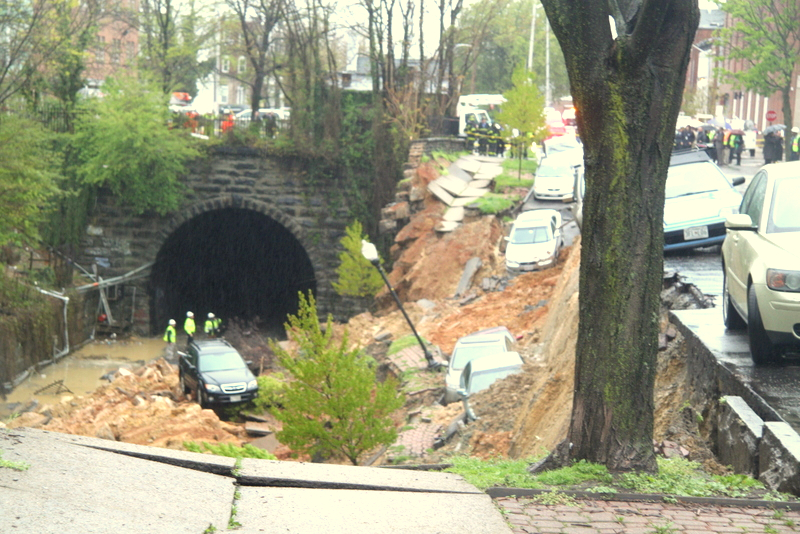