For years, Baltimore officials have turned to individuals from outside the city to donate the live tree placed in front of City Hall and decorated with lights for the holiday season.

But this Monday, the 30-foot tall Norway Spruce to be the focal point of the tree-lighting ceremony planned by Mayor Catherine Pugh comes from a different source:

Baltimore arborist Erik Dihle confirmed that the tree was cut down by city workers at Druid Hill Park last week.

“There was a need to have a cut tree in front of City Hall, but it was hard to find one this year,” Dihle told The Brew. “Even though a real effort was made.”

For Dihle, who leads the city’s efforts to grow its urban tree canopy, the decision to fell a mature specimen in a park clearly didn’t sit well.

“I don’t like the fact that it was a live tree. It’s not good to take a live tree. But,” he added after a pause, “I think it’s worthwhile to promote this holiday tradition, and in this case the greater good was served.” 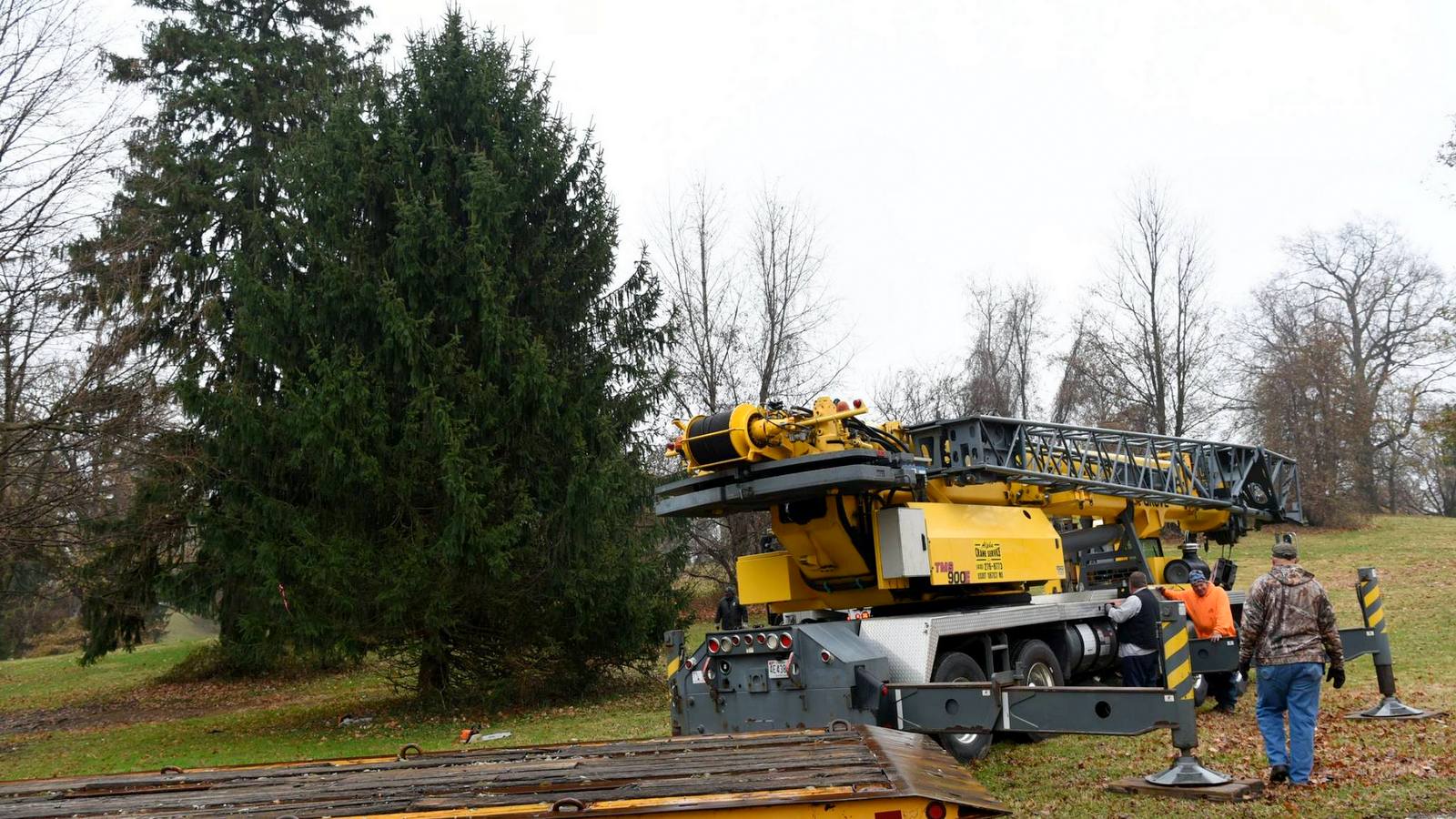 Workers on November 26, prepare to cut down a spruce at Druid Hill Park to be used as the City Hall Christmas tree. (Mayor Catherine Pugh Facebook)

As news of the tree-chopping spread, there were angry postings on social media, mostly directed at Mayor Pugh.

“Anonymous Tree Baltimore employees are sick that our Mayor has ordered a healthy mature Norway Spruce to be hacked down from Druid Hill Park for her City Hall lighting!” said Baltimore artist Dan Van Allen, posting about the incident on Facebook.

“I’m sure there are several Maryland Xmas tree farms that would donate one of their overgrown trees to the City if money is really the issue!” he wrote.

“The mayor and her hatchet men!” one commenter chided.

“Enjoy light refreshments, music, pictures with Santa Claus, a photo with the Mayor and more!” the event post on Facebook said, noting that music would be provided by, among other performers, Davon Fleming, made a paid city consultant by Pugh earlier this year after he reached the semi-finals of NBC’s “The Voice.” 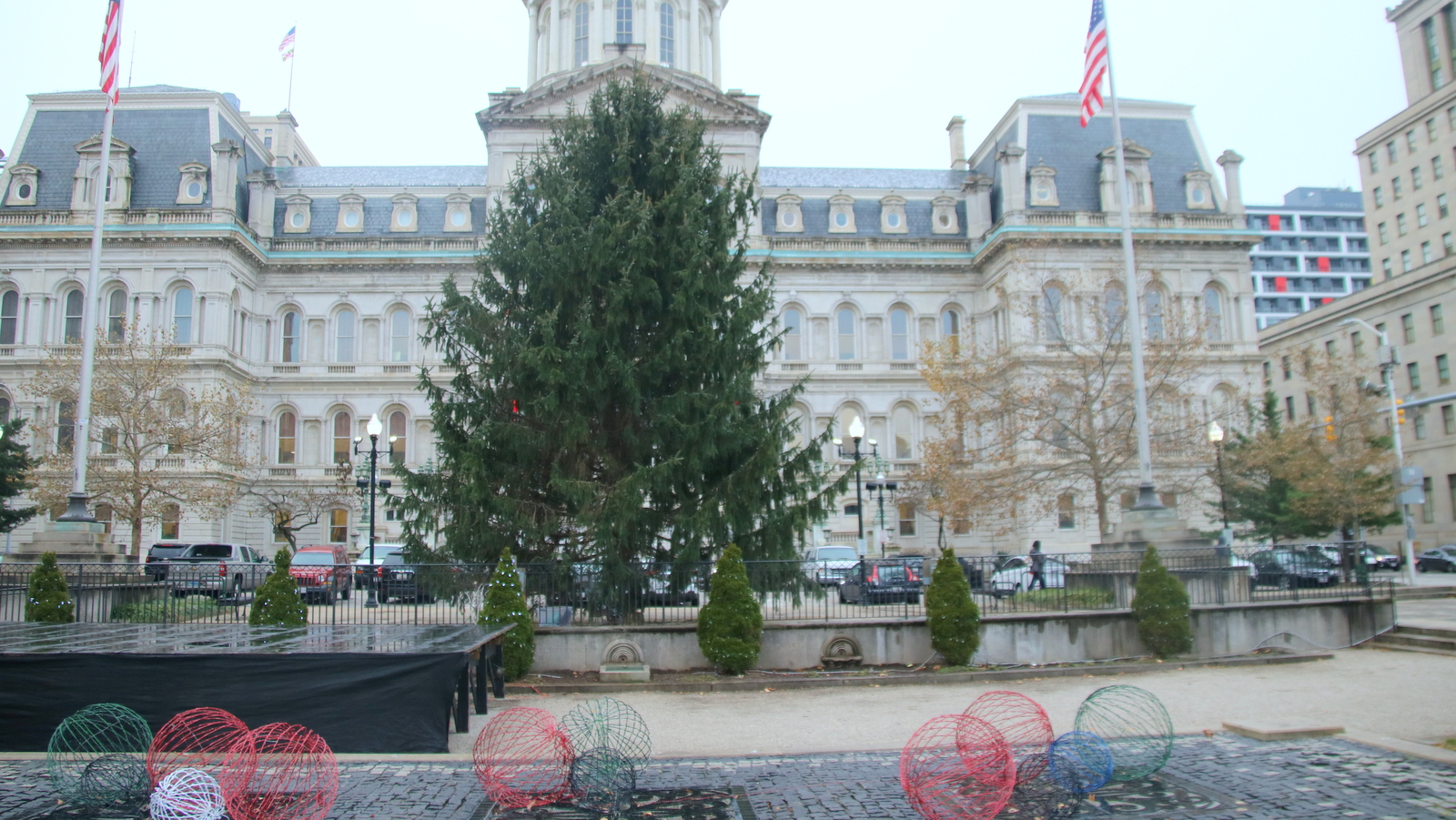 The Christmas tree that Mayor Pugh will be lighting on Monday was taken from Druid Hill Park, growing in a spot city officials said was near the Maryland Zoo. (Fern Shen)

When he called City Hall to complain, one commenter noted, “the operator said she didn’t think the mayor would do such a thing.”

Did the decision to wield a chainsaw In Druid Hill Park come from Pugh?

“I’m just going to say that it’s the city. I’m not going to come back and pinpoint how this was decided,” Dihle said when asked.

“The Mayor did not choose to use a tree from the park,” he wrote in a statement to The Brew. “This year we didn’t receive a donation in time for the holidays, and Rec & Parks identified a suitable replacement for use.”

City Arborist: “I’m not going to come back and pinpoint how this was decided.”

The tradition of soliciting a tree from private donors goes back at least 10 years, city officials say.

In 2014, for example, the City Hall holiday tree came from a Carney family’s front yard. A 2012 mayoral press release promised potential donors “a letter of thanks from Mayor Stephanie Rawlings-Blake” in return.

How old is the tree cut last Monday? Dihle said he would have to count the rings.

Asked where at Druid Hill Park the tree stood, he said, “On a hillside near a parking area at the Maryland Zoo.”

Photos posted by the mayor’s office show the tree standing on a grassy hillside.

Dihle remarked that the cut-down tree “could have ultimately been impacted because the parking lot area may be being expanded there in the future.”

He promised that a replacement spruce will be planted somewhere in the city to make up for the loss of this one.

And he noted that the tree cut from the park will be recycled at the city’s wood waste collection yard (Camp Small) after it finishes its last stand on War Memorial Plaza.

A few voices online said the critics were blowing the matter out of proportion.

“Maybe they have plans to plant native trees in its place,” one said. “So what.”

But most frowned on the sacrifice of the spruce, the latest high-profile municipal assault on the city’s own tree canopy.

Earlier this year, the Department of Public Works cut nearly 200 trees at Hanlon Park in Ashburton for a water tank project.

One of the nearly 200 mature trees cut down at Hanlon Park earlier this year. Facing the downed tree is Heritage United Church of Christ, a landmark on Liberty Heights Avenue. (Mark Reutter)

So what are city officials doing to to prevent other trees in the city’s parks from becoming next year’s yuletide casualties?

Their strategies appear to be long-term and at this point a bit hazy.

Dihle said he looks forward to the day when Baltimore marks the holidays by decorating a living tree on City Hall grounds.

Rec and Parks spokesperson Whitney Clemmons Brown said the agency “plans to identify a space within our park inventory specifically for the growing and harvesting of trees for holiday use.”

Those ideas didn’t console commenter Lisa Lewenz, who speculated that it would take another 30 years for trees to reach the size of the one the city cut down.

“In the meantime,” she said, “they decimated a micro habitat for countless creatures and insects.” 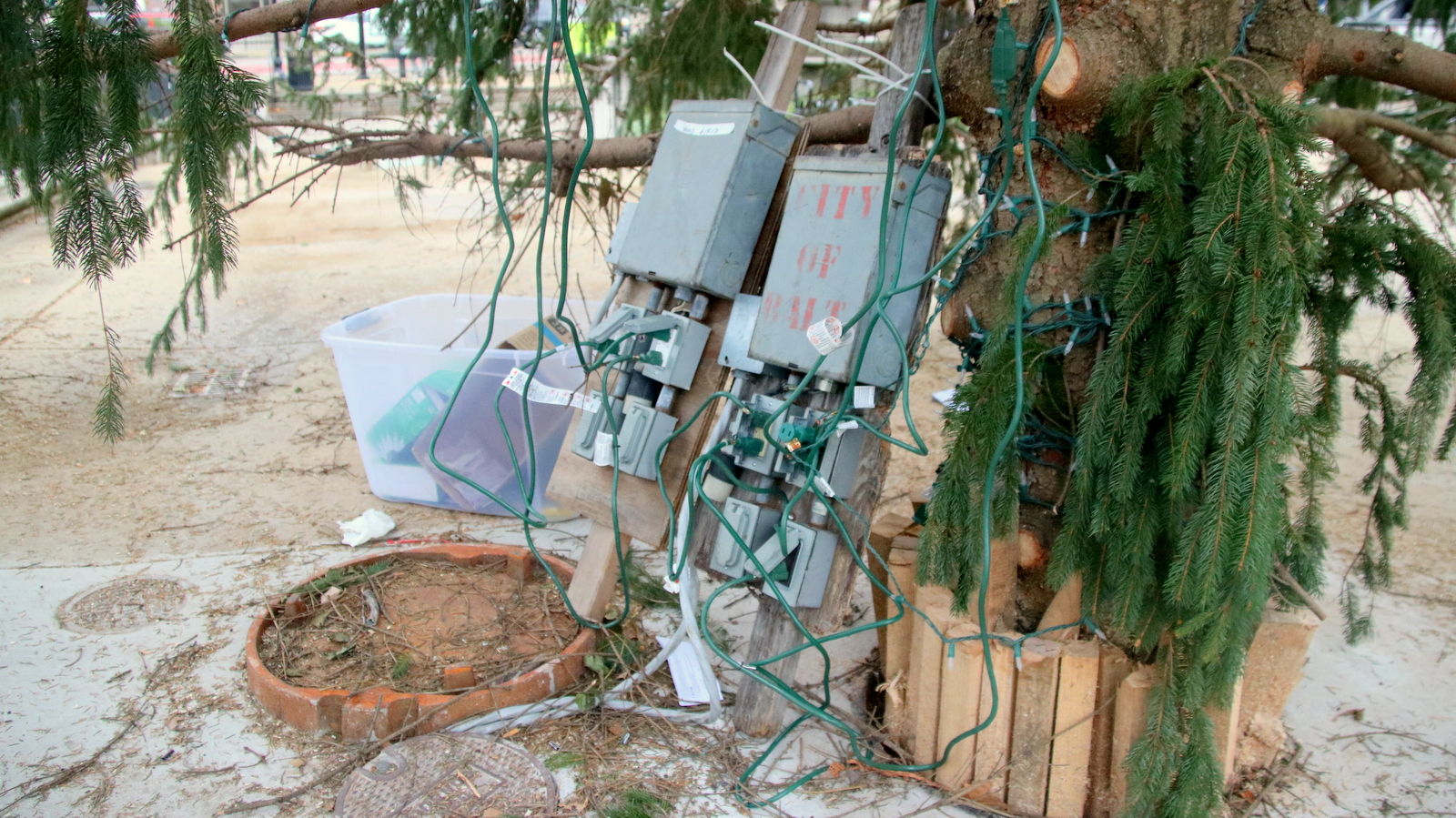 Positioned in a hole at the west end of War Memorial Plaza, the spruce is wired and ready for Monday’s tree-lighting ceremony. (Fern Shen)