Once hailed as an economic “game changer” and “anchor institution” for Baltimore, Horseshoe Casino continues its slo-mo tumble into lackluster profits, pushed by fierce competition from other casinos.

Compared to results in prior years, last month’s performance highlights the casino’s doldrums as it enters its fifth year of operations: 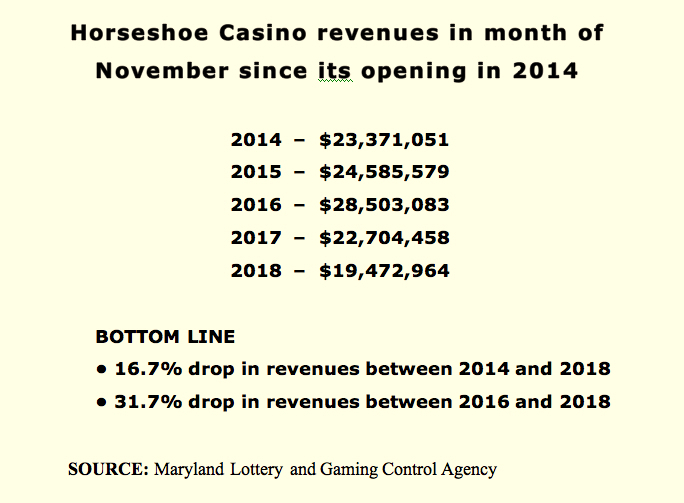 In striking contrast to Horseshoe’s poor performance is the overall health of Maryland’s gaming industry.

Or stated differently, whereas Horseshoe represented 31% of Maryland casino revenues in November 2016, last month its revenue stream was just 13.9% of the total.

In striking contrast to Horseshoe’s poor performance is the overall health of Maryland’s gaming industry.

It wasn’t supposed to be this way, according to Baltimore’s former mayor.

Since then, the small fees that Horseshoe pays to lease city land have had no impact on the city’s property tax rate or on public construction.

The only sizable cash flow has gone to the Baltimore Casino Local Development Council (BLDC), with the lion’s share of those funds paying for city services that chiefly benefit the casino.

BLDC’s 2018 spending budget of $7.4 million, for example, includes more than $1.6 million for police protection around the casino, $358,000 for medic services, $435,000 for supplemental garbage collection, $540,000 to staff a mayoral employment center, and $2 million for infrastructure improvements around the casino.

In short, Rawlings-Blake’s promise that the casino would join Johns Hopkins, the University of Maryland, and other colleges and hospitals as “one of our anchor institutions” has not become a reality. 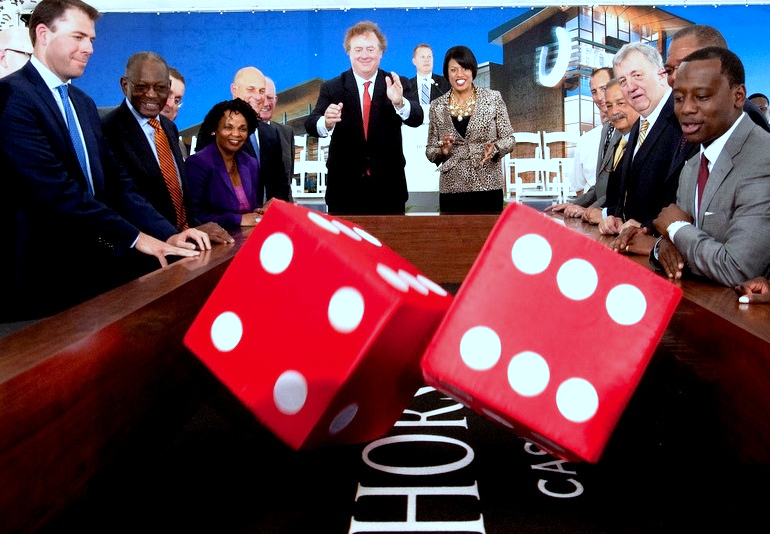 A review of state gaming records by The Brew shows that the biggest drop-off in Horseshoe’s revenues did not come in the wake of the civic disturbances after Freddie Gray’s death in 2015, but from the opening of MGM National Harbor a year later.

Revenues at Horseshoe plummeted by $8.5 million during the first month of National Harbor’s operations.

They never really recovered, swinging from a high of $27 million in March 2017 to a low of $19.6 million in October 2017 – the worst showing in Horseshoe’s history before last month.

The gaming center is now known as Live! Casino & Hotel and is pulling down big revenues – $48.7 million last month.

Owned by the Cordish family, the casino has solidified its position as Maryland’s second largest casino after National Harbor, with Horseshoe a far distant third.

CBAC Gaming, the owner of Horseshoe, has responded to the competition by seeking to turn the ugly tableau of gas stations and warehouses surrounding its facility into an inviting sports and entertainment hub.

Caves Valley Partners, the Towson developer that owns a minority interest in Horseshoe, is trying, with the city’s help, to lure Topgolf, a Dallas-based chain of indoor golf ranges, to a site near the casino.

Giving up the notion that Horseshoe will serve as an “anchor institution” by itself, Mayor Catherine Pugh recently declared Topgolf to be the district’s next savior, saying it will not only “add hundreds of new jobs” to the area, but serve as “a catalyst for adjacent renewal and development.”

The trouble is that the site is now occupied by BARCS (Baltimore Animal Rescue and Care Shelter). Removal of the shelter to a new home would require as much as $18 million that neither BARCS nor the city says it has.

The upshot is that Topgolf is likely two years away from groundbreaking under the best scenario. (UPDATE 12/7: As it happens, the city’s development arm is asking the Pugh administration to waive rules regarding the sale of public land to expedite the transfer of city property to BARCS.)

There are other projects in the works, including a Hammerjacks club and concert hall planned two blocks from the casino.

In October, the casino announced a marketing deal with the Baltimore Ravens, whose M&T Bank Stadium lies north of the casino, separated by the busy mainline tracks of CSX.

Currently missing from the development puzzle is how to attract a hotel that would match the luxury accommodations found at National Harbor and Live!

Until that time, Horseshoe appears destined to serve as a “commuter casino” with limited appeal to gamblers or tourists outside of the metropolitan area – and with limited opportunities to gain market share in Maryland’s thriving gaming business.