The city of Green, Ohio, recently got a $7.5 million cash infusion – plus 20 acres of parkland – in exchange for allowing the Nexus natural gas pipeline to run across its land outside of Akron, Ohio.

So why does the Pugh administration want just $1.4 million from BGE/Exelon to lease a two-mile-long swath of Baltimore’s only wilderness parkland for a natural gas pipeline?

That’s a question the Friends of Gwynns Falls/Leakin Park has been asking Mayor Catherine Pugh and the Department of Parks and Recreation for the last nine months.

During that time, BGE has nearly finished the pipeline, which will replace an older pipe on a different alignment through western Leakin Park.

Work is now suspended because of cold weather. But the utility plans to finish installation this spring and hook up the line soon thereafter.

According to the Friends group – and confirmed by documents signed by Baltimore’s Department of Recreation and Parks – the pipeline has damaged the third largest urban wilderness park in the U.S., directly altering the topography, water drainage, and flora and fauna of 20 acres of land. 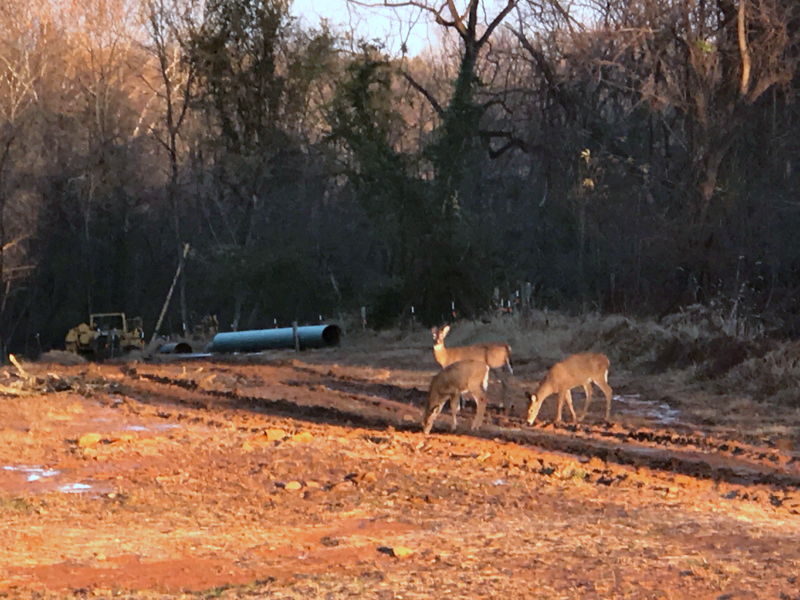 Deer graze at dusk along a cleared section of the two-mile-long pipeline. (Mark Reutter)

In a 2017 agreement with BGE, Recreation and Parks noted that about 800 trees were to be removed for the pipeline. Among the inventory of lost trees:

• 701 mature-growth trees with a diameter of 8 inches or greater, measured at 4.5 feet from the ground, and

• 82 trees recently planted along a park service road, with a diameter of 1 inch or greater.

These trees would not be replaced along the route of the new pipeline.

Because BGE wants to visually inspect the pipeline from the air, the city agreed that a 50-foot-wide swath of former forest would be permanently kept free of trees and shrubs.

The conservation group accuses the Board of Estimates of entering into a sweetheart deal with BGE – and its attorney says the Pugh administration illegally allowed construction to proceed before the pipeline got the necessary approval from the City Council.

These actions “call into question the entire process and the thoroughness with which the city administration examined the $1.4 million settlement it agreed to from BGE/Exelon,” the Friends group concluded in a statement shared with The Brew.

“What we’re asking for is fair compensation and due process for the park,” said board member Jack Lattimore. 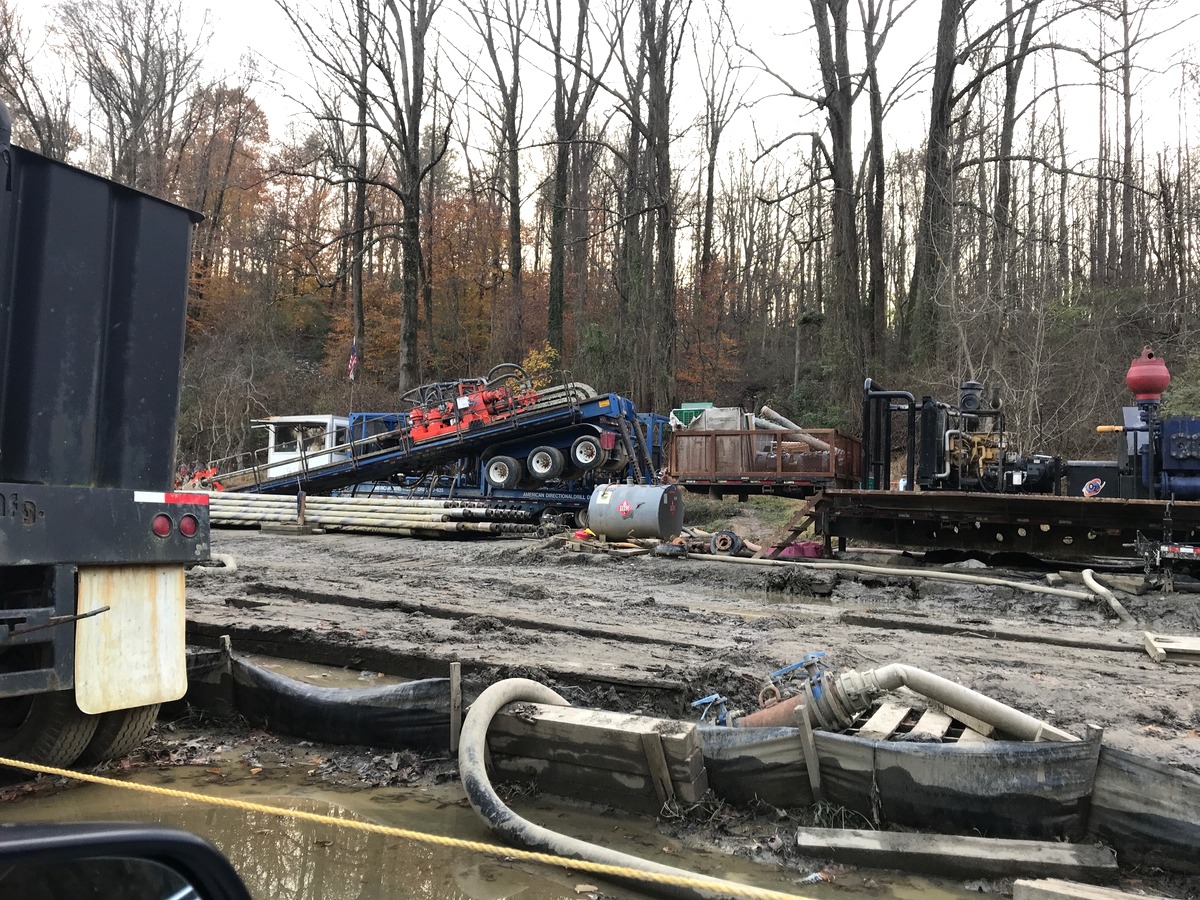 Mayor Pugh’s spokesman was emailed a copy of the Friends’ statement yesterday and asked to respond. NOTE: The statement is posted at the end of this story.

As of this morning, there has been no response by the mayor’s office.

BGE has been a notable supporter of Pugh since she was a state Senator and later when she ran for mayor.

Led by CEO Calvin G. Butler Jr., some 30 executives at BGE and its parent companies, Constellation and Exelon, pumped $18,500 into Pugh’s Democratic Party Primary run in 2016.

Most of the contributions came in $500 increments, with $1,000 donated by Butler himself and $1,000 each coming from diversity manager Frank Kelly and Constellation CEO Joseph Nigro, according to Maryland Board of Elections records.

In 2017, The Brew traced $12,000 in donations from people employed by BGE/Exelon/Constellation. Since becoming mayor, Pugh has reaped $3,250 from Butler alone. 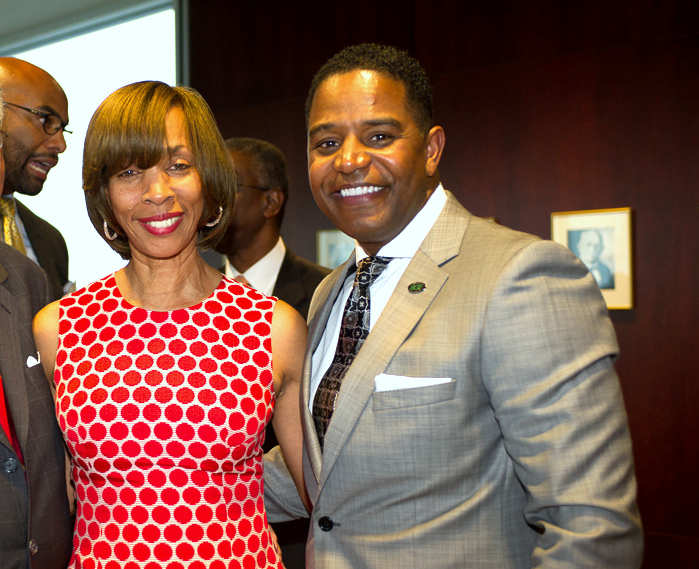 What’s a Park Worth?

Parkland is considered of much greater value than surrounding commercial or residential property because of its habitat preservation, carbon storage, watershed protection and importance to future generations.

The U.S. Forest Service, for example, calculates the “intrinsic” worth of park property at 7.4 times its direct economic value.

It was such an assessment that led to the large cash settlement between Green, Ohio, and the Nexus Pipeline. Originally, Nexus had offered $146,000 based on a commercial appraisal of the land used.

Lattimore says a similar type of appraisal should have been performed by an independent party on the right of way sought by BGE used between Cooks Lane and Rognel Heights. 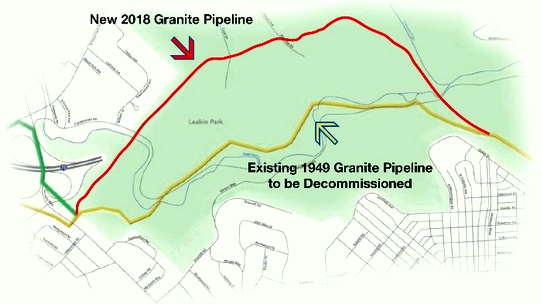 Location of the new and original gas pipelines in Leakin Park between Cooks Lane and Rognel Heights. (bge.com)

Lattimore says his group was given confidential information that Recreation and Parks calculated last summer that BGE should pay the city $14 million for removing the land from recreational use.

Last November, city attorney Victor Trevala told City Council members that his office had negotiated a $1.4 million lump-sum payment by BGE in return for a franchise agreement. He acknowledged that Rec and Parks had “vociferously” objected to the price as too low.

Trevala did not respond this week to questions by The Brew about the pipeline deal.

Deputy Parks Director William Vondrasek also wouldn’t comment, instead directing a reporter to an agency spokesperson, who called the $14 million figure “inaccurate” but declined to provide a correct number.

The Brew has filed a Maryland Public Information Act request for reports, correspondence and meeting notes from the department. 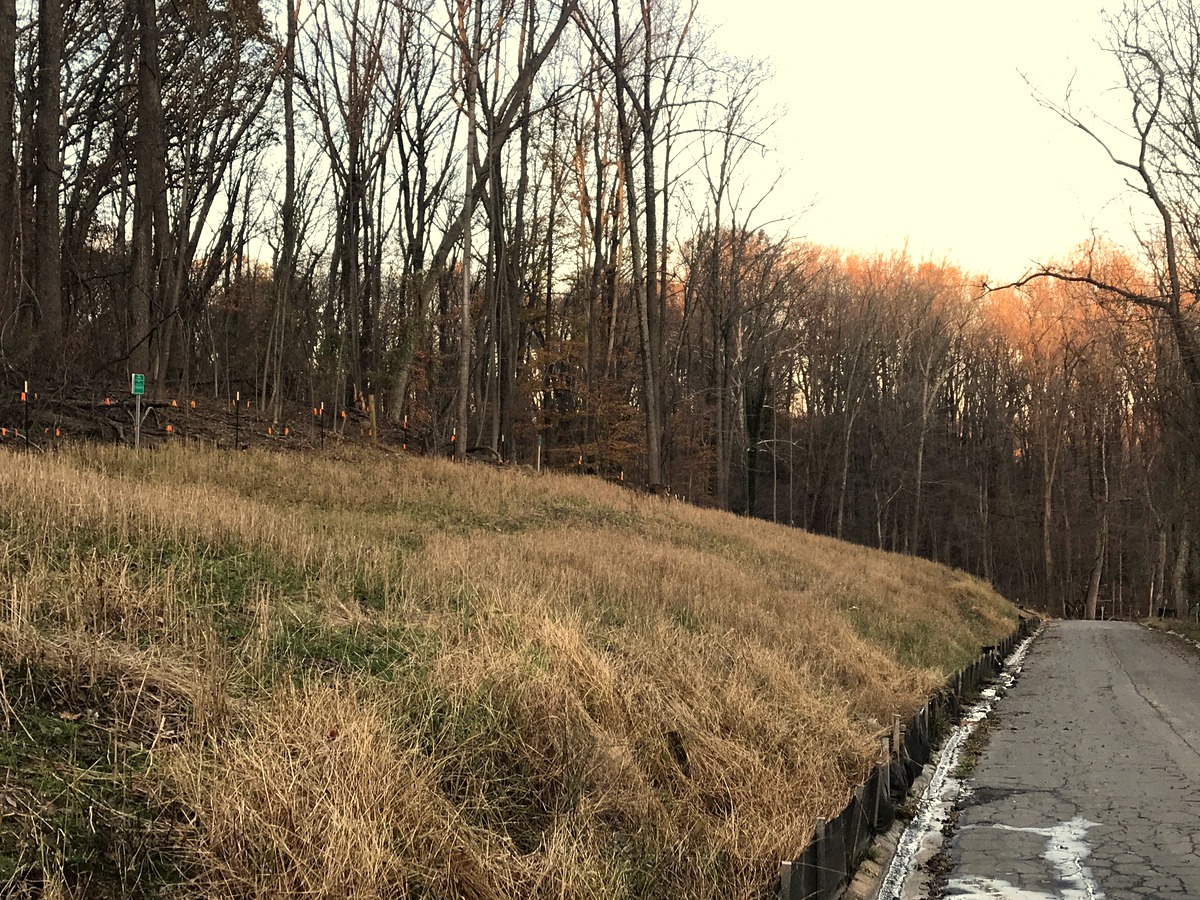 A finished section shows the clear-cut right of way that will allow BGE to inspect the pipeline from the air. (Mark Reutter)

BGE has not secured a franchise agreement to occupy the new right of way, which will be part of the so-called Granite Pipeline that carries natural gas from western Maryland to storage tanks in South Baltimore.

A franchise ordinance was introduced in the City Council last October by the Pugh administration. Significantly, it left blank how much BGE would pay for the 25-year lease (see below).

How much will BGE pay for the 25-year franchise? The bill introduced by the Pugh administration left that question blank. (CC Ordinance 18-0298)

Following objections by the Friends group and others, the Housing and Urban Affairs Committee decided not to move the bill forward.

Councilman Kristerfer Burnett, whose district includes Leakin Park, says he is looking for more guidance from the Pugh administration.

In an interview Tuesday, he suggested that the administration might bypass the Council and instead enter into a “final acceptance” with BGE certifying that construction is complete.

UPDATE: Burnett says that he agrees with the Friends group that the franchise price of $1.4 million is too low and says Recreation and Parks is willing to renegotiate the price. Based on his reading of the 2017 agreement, BGE has the authority to turn on the new pipeline following the city’s “final acceptance.” But, eventually, BGE will have to secure a franchise agreement from the Council. “It’s a waiting game,” he said.

Before determining the franchise price, the mayor and Board of Estimates approved a “final acceptance” process for BGE to start up the new pipeline. (BOE Agenda, September 27, 2017)

BGE: “We are finalizing agreements”

According to Burnett and others, BGE has refused to renegotiate the franchise price, arguing that it got approval from the mayor and the Board of Estimates to proceed with pipeline construction back in 2017.

Several attempts over several days to reach BGE spokesman Aaron Koos were not successful.
_______________________
UPDATE: Responding this afternoon, BGE spokeswoman Linda Foy said the company “is continuing to work with the city to finalize the agreements for the project.”

Foy did not say how much the company will pay, but predicted “it will be substantially more than the $1.4 million quoted in the article as the omnibus agreement alone is for $2.6 million.”
_______________________
In online material, BGE pledges to pay for 900 new trees in city parks and to spend $300,000 to upgrade trails, a tennis court and a ball field damaged by pipeline construction at Leakin Park. 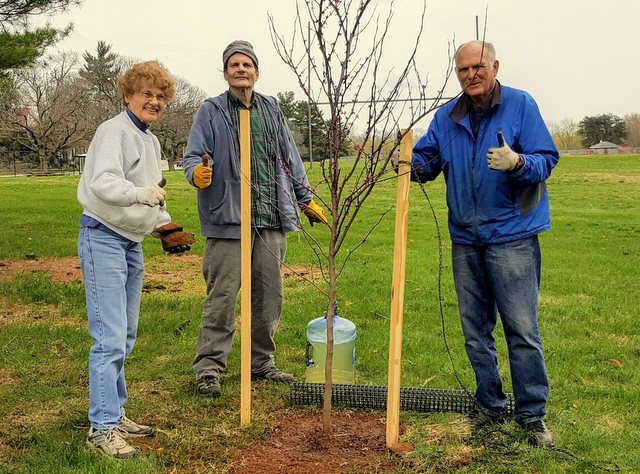 According to Michael R. McCann, a Towson attorney hired by the Friends group, the Pugh administration violated the city charter by allowing BGE to start on the new pipeline before the franchise ordinance was approved.

In a January 10, 2019 letter to City Council President Bernard C. “Jack” Young, McCann complained that the Pugh administration had “lost all bargaining power with BGE to obtain the compensation that the park and public deserves” by allowing BGE to start construction without first establishing a franchise price.

The attorney said the City Council should send the franchise agreement back to the Board of Estimates and demand that an independent appraisal of the value of the parkland occupied by the pipeline be undertaken.

“My clients would fully support that effort and would welcome the opportunity to meet with you and the Council to discuss this,” McCann told Young.
______________________________
STATEMENT ON THE BGE PIPELINE BY FRIENDS OF GWYNNS FALLS/LEAKIN PARK: 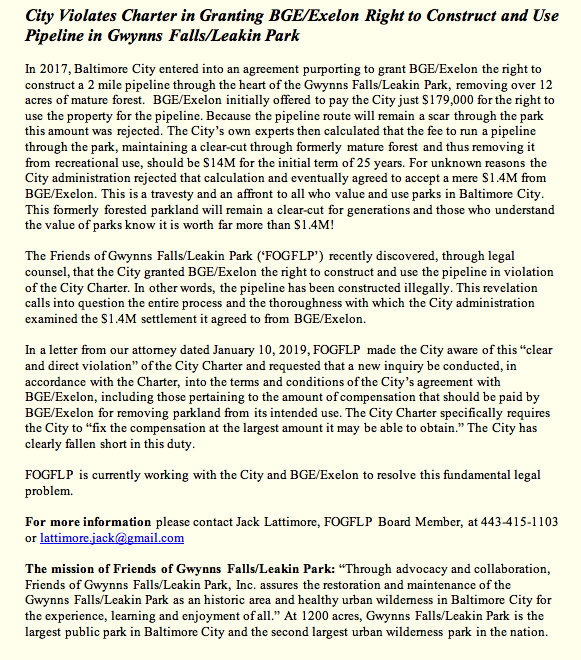