The razing of 3511 and 3523 Clipper Road was carried out yesterday in full view of shocked residents, including Sheri Higgins, president of the Woodberry Community Association, by a crew using unmarked trucks and rented excavating equipment.

Higgins and others said they believed they had a commitment with the developer to keep the stone facades of the buildings intact as part of a proposed apartment complex.

Chris Mfume, who has been the public face for the project, has given conflicting accounts of his role in the demolition.

At first, he asserted the house removal was a financial decision because the buildings would be too expensive to retain. Hours later, he issued a statement saying he was not aware the demolition was going to happen.

Mfume now says he and his firm, CLD Partners, are severing ties with the apartment project. He is the son of former five-term Democratic Congressman Kweisi Mfume.

PI.KL Studio, the architect of the project, also announced it had no prior knowledge of the demolition and was withdrawing from the project.

The studio had incorporated the building facades into the apartment design, which won praise and was approved by the city’s Urban Design & Architecture Advisory Panel (UDAAP) last January.

Meanwhile, documents on file with the city show the actual property owner, Woodberry Station LLC, had extended its demolition permit to raze the two building, setting the stage for yesterday’s tear down.

That LLC is tied to Katherine V. Jennings, the former wife of financier Larry E. Jennings Jr., who is seeking to develop key parcels of nearby Clipper Mill to the consternation of some community members. The two still share ownership of a house in The Orchards in North Baltimore.

In recent years, she has given a total of $6,000 to former Mayor Catherine Pugh, while Larry Jennings personally gave Pugh $1,000.

During the same month, Chris Mfume contributed $150 to Pinkett, while AB Associates gave the councilman $100.

AB Associates has represented Mfume and Woodberry Station before UDAAP and the community. It is headed by Al Barry, former deputy director of the Baltimore Planning Department.

UPDATE: In response to questions about the contributions, Pinkett said, “I guess I am fortunate to have some faithful donors.” Saying donations do not influence his actions as a councilman, he added, “I believe I am well supported by the Clipper Mill community.”

Neither Katherine nor Larry Jennings – the senior managing director at ValStone Partners and a former commissioner at the Baltimore Housing Authority – could be reached for comment. 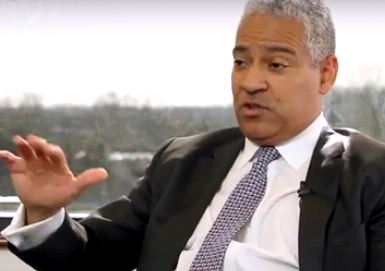 After the demolition began, residents made panicked calls to the Department of Housing and Community Development and to Councilman Pinkett.

Pinkett arrived first to say he was blindsided by what was happening. He told residents that the demolition appeared to be a violation of the agreement made between Mfume and the community.

Hours later, a city inspector came on the scene. He issued a “stop-work” order. By that time, the houses had been leveled. 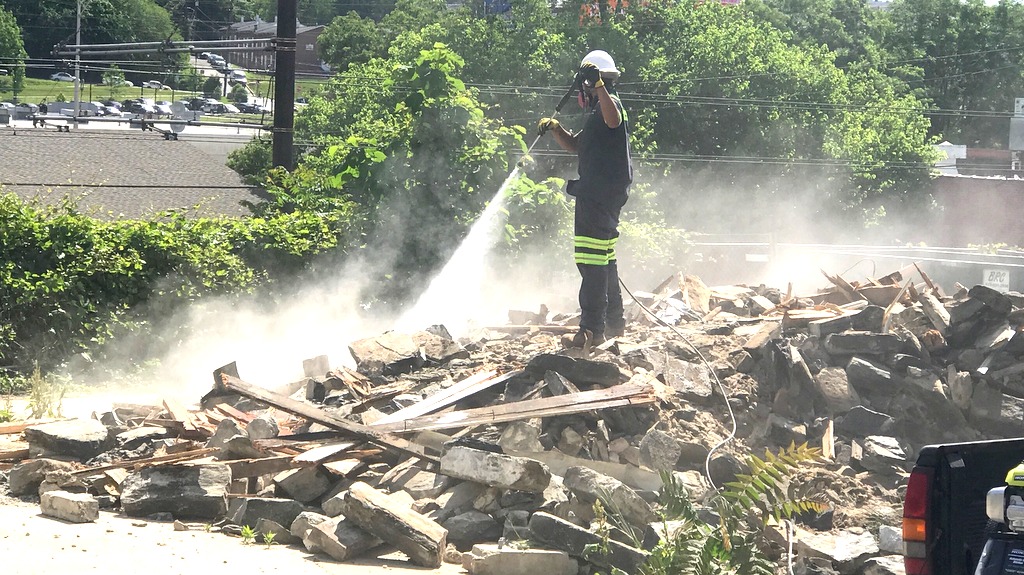 Hosing down the rubble from yesterday’s demolition. HCD has cited the contractor for using insufficient water to contain the dust. (Mark Reutter)

Since then, the housing department issued $2,000 in “penalty surcharges” to Woodberry Station LLC and is preparing two $500 citations.

HCD spokesperson Tammy Hawley said the owner will be cited for three housing code violations – failure to post demolition signs on the buildings, failure to inform HCD of the demolition to schedule an on-site pre-inspection, and failure to use sufficient water to control dust.

Demolition Man Contracting, of 4213 Reisterstown Road, will also be issued two $500 citations for its role in the demolition, Hawley said.

The person who supervised yesterday’s demolition refused to identify herself or give the name of the company she represented. She was later identified as Paula Richardson, who formerly worked for HCD in code enforcement.

The demolition contractor forfeited its company charter in 2014, was revived in 2015 and currently is out of compliance with the Maryland Department of Assessments and Taxation.

She is now listed as chief operating officer of Demolition Man Contracting.

A review of state records shows that Demolition Man was incorporated in 2012, forfeited in 2014 and revived in 2015.

It is currently listed as “not in good standing” with the Maryland Department of Assessments and Taxation, which makes the company ineligible for state or city contracts.

For the preservation community, the destruction of the buildings represents a significant loss.

In 2003, the National Trust for Historic Preservation judged the Jones Falls Valley mill buildings to be among the greatest surviving examples of early industrial America, comparable to the mills at Lowell, Massachusetts, said Johns W. Hopkins, executive director of Baltimore Heritage.

“These 1840s buildings were a critical part of that,” Hopkins said. “A part of one of the things that make Baltimore special, that make people fall in love with us and want to live here. They are irreplaceable.”

Johns Hopkins of Baltimore Heritage: “Something went very wrong here. . . I am still trying to wrap my head around it.”

An apartment building design proposed by the developer that left the old stone structures intact went through three levels of review by UDAAP, Hopkins pointed out.

“Then we woke up on Tuesday and this happened,” he said in an interview with The Brew. “Something went very wrong here.”

“It’s not fair that the development team had a right to demolish after they had been representing that they were not demolishing the buildings in public forums with the community and at UDAAP,” Hopkins said. “I am still trying to wrap my head around it.”

Informed that Woodberry residents are organizing a working group to review changes that could be made to prevent similar historic building demolitions from occurring, Hopkins applauded the effort.

“We still don’t know who decided what, when,” he said, adding that he has thought of little else since the demolition took place.

“When I go to bed tonight, I’m going to be thinking about all the emails I’ve gotten from people asking me, ‘How did this happen?’”