The crowd applauded as Pless B. Jones swung the orange-yellow arm of his excavator against the slate-gray wall at Bradford and Lanvale streets.

A deep-throated boom sounded from hundred-year-old bricks splintered by the hydraulic punch of the machine. The bucket hit just below the cornice line, knocking out a jagged hole that revealed a humble plastered bedroom that once was the home to who knows how many people.

1701 North Bradford was condemned yesterday to public execution as part of Project C.O.R.E., the state-city collaboration designed to clear East and West Baltimore of derelict and undesirable houses.

“The message to you is, there ain’t no stopping us now,” Mayor Bernard C. “Jack” Young crowed.

“Too often, the challenges get all of the attention,” he said, repeating the sentence twice more for emphasis. “But today is a celebration of our good work and progress. Please enjoy the celebration, and let’s keep Baltimore moving forward together.” 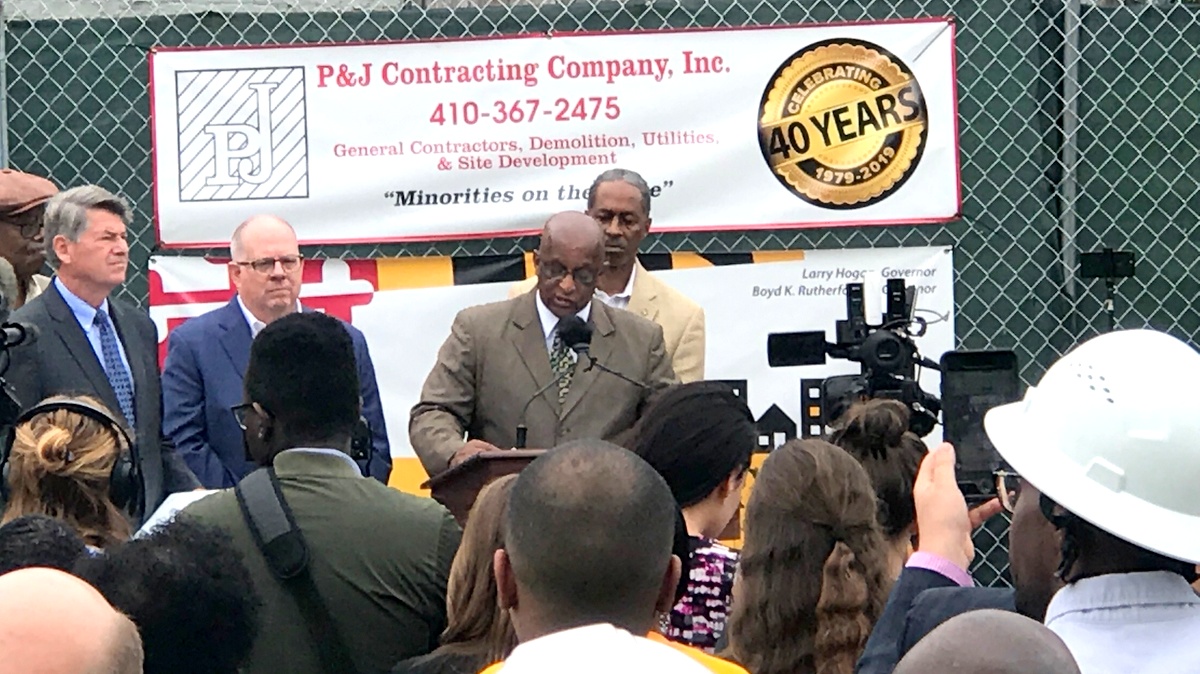 Mayor Jack Young speaks at the demolition site. To his right are Gov. Larry Hogan and Maryland Housing Secretary Kenneth C. Holt. Most of the rowhouses seen below – in the 1600 block of Montford Avenue – are scheduled to be knocked down. (Mark Reutter) 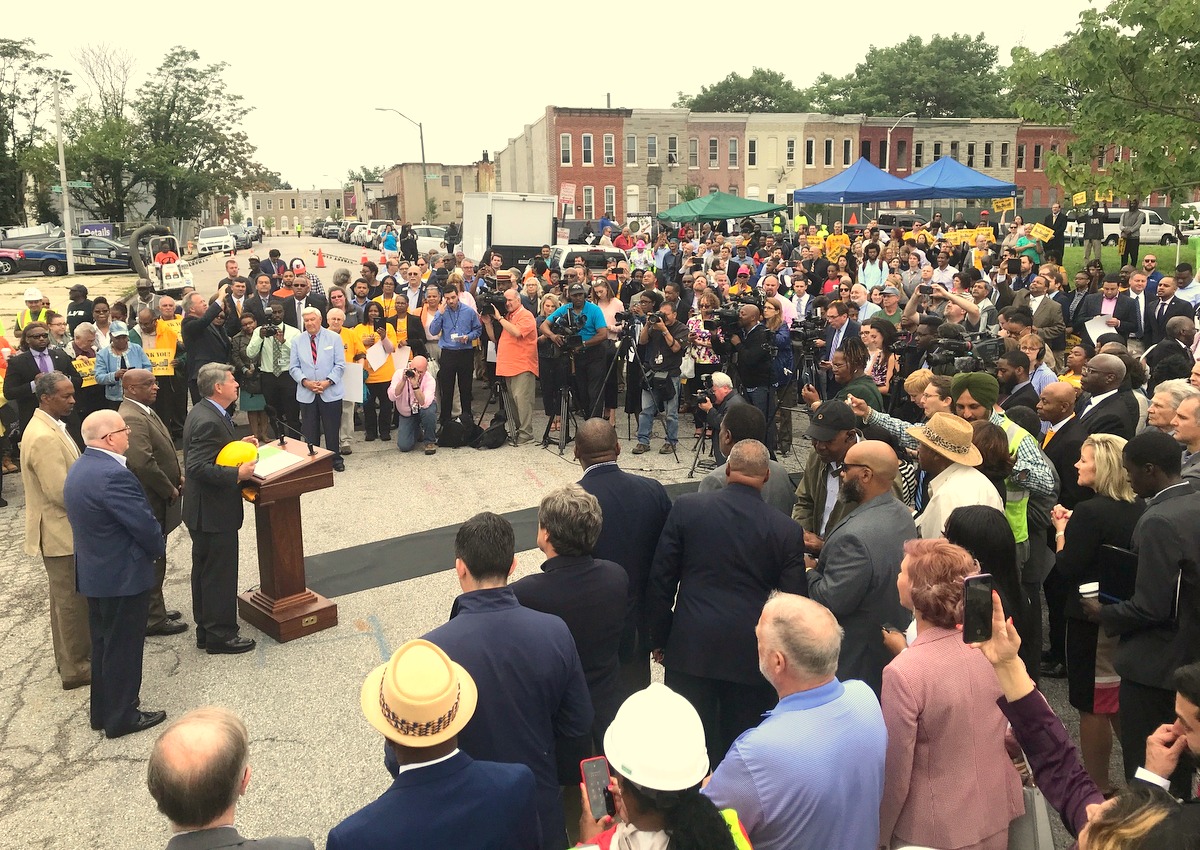 A few moments before, he boasted that “nothing like this has ever been accomplished here in Baltimore City. These efforts are about taking our community back and renewing hope and opportunities.”

This is a fudged figure. Only 2,800 houses have actually been razed, state officials concede, while the other 1,200 buildings are still in the administrative pipeline.

To further inflate the total, the Maryland Department of Housing and Community Development counts demolished commercial buildings in its tally.

First, it estimates how many residential units could theoretically fit into those buildings, then adds that number to the demolition total.

Whatever the exact number of exterminated houses, the program has circulated tens of millions of dollars among nonprofits and community corporations as well as the city housing department.

C.O.R.E. has circulated tens of millions of dollars among nonprofits and community corporations

The program has also been a bonanza for demolition contractors. These range from Humanim, a not-for-profit “social impact organization” that practices housing deconstruction, to commercial bucket-swingers like Pless Jones’ P&J Contracting, which has long dominated Baltimore’s emergency demo market. 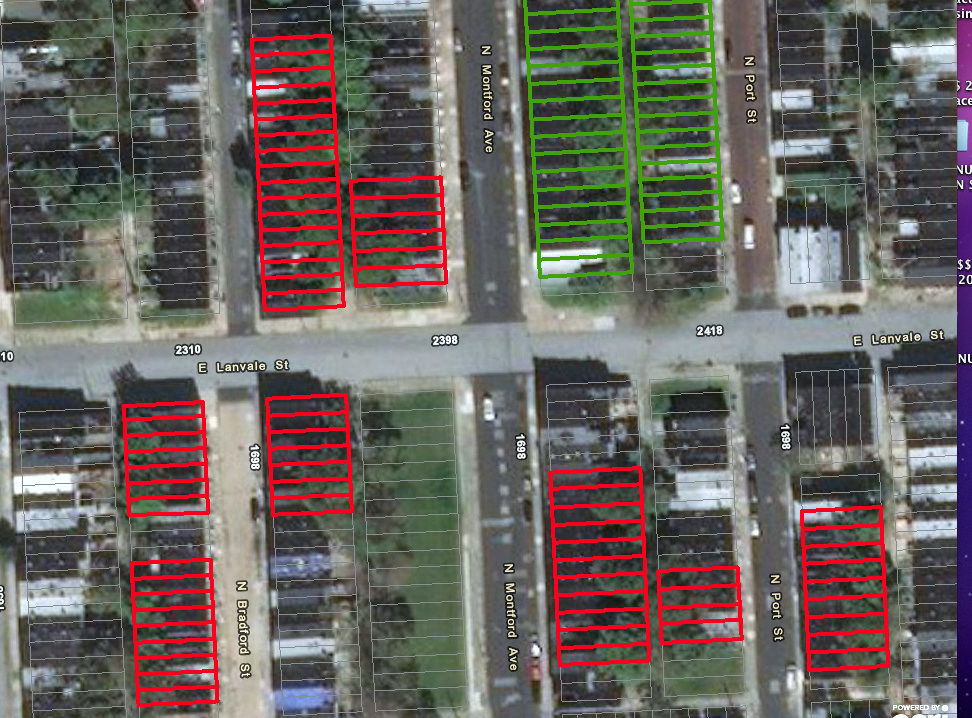 NOT MUCH LEFT: Red lines show the houses to be demolished on Bradford, Montford and Port Street in the Broadway East neighborhood. Green lines represent prior demolition under Project C.O.R.E. (Maryland HCD)

“Hard to find a place to live”

About the only interest group not represented at the event was the people who live in the immediate vicinity.

Two residents of the 1600 block of Bradford didn’t leave their stoop to join the throng. Asked if they often saw so many VIPs and television cameras in their neighborhood, the man laughed. “Think they’ll be here tomorrow?”

Asking not to be identified, he said his rented house was spared from the wrecking ball because “the city ran out of money for resettling people. They got as far as this house and they stopped.”

“Think they’ll be here tomorrow,” asked a nearby stoop sitter.

But he was worried about being displaced in the future.

“There’s a lot of people around here that need a decent place to live. But it’s hard to find cause they keep knocking down these houses.” 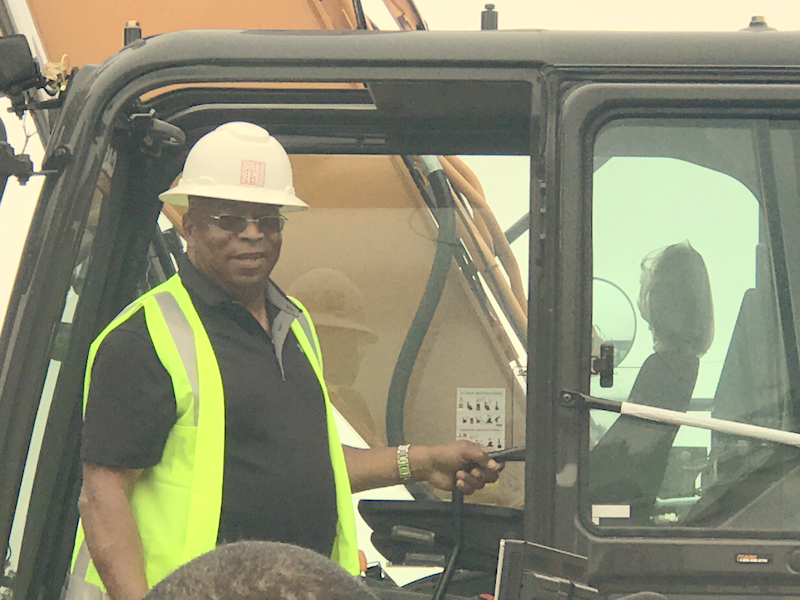 Hogan told the crowd a much different story.

He said that he was inspired to start the demolition program when he and now-Lt. Gov. Boyd Rutherford “walked the streets of Baltimore” during the 2014 campaign. They kept running into regular citizens who asked them, “Can you do something to help us with this blight?”

As soon as he became governor, “I immediately directed our entire administration to think outside the box and to come up with creative and innovative solutions that could deliver real results. We launched Project C.O.R.E. in 2016. It stands for Creating Opportunities for Renewal and Enterprise.”

Hogan then cited statistics, including $100 million in direct state aid and $420 million in indirect state financing, which he said has “leveraged an incredible 1.8 billion private public and philanthropic dollars” for Baltimore redevelopment since 2016. 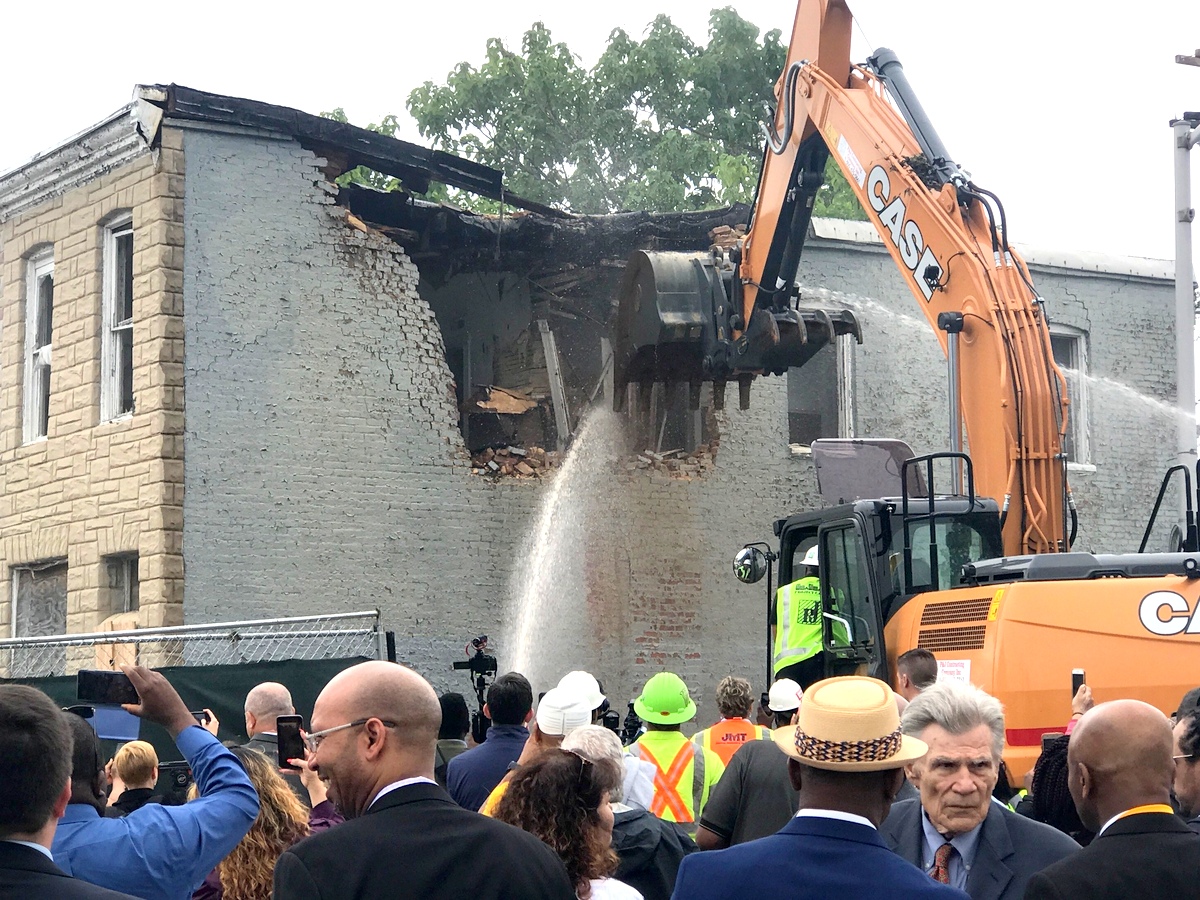 Yesterday’s tear-down was an opportunity for networking and for campaign-style sign waving. (Mark Reutter) 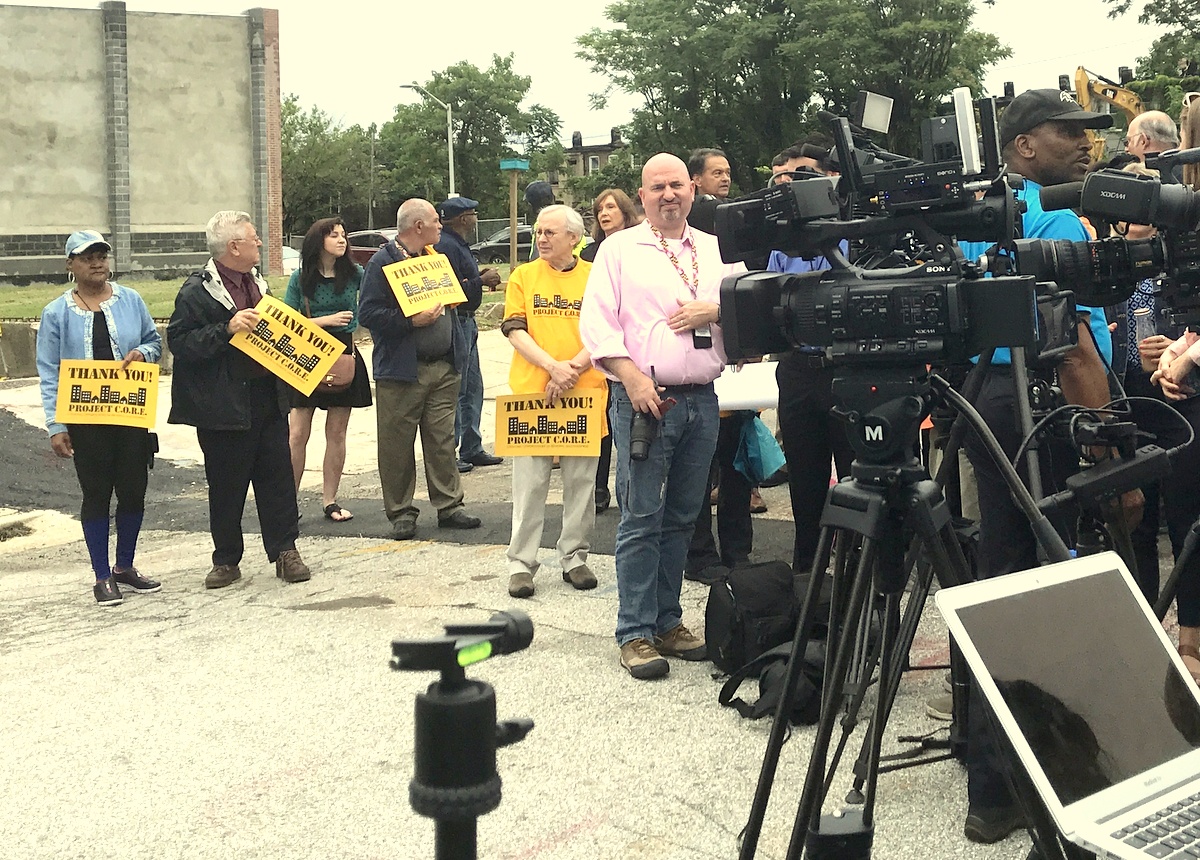 Listening to the governor’s words yesterday, homeless advocate Christina Flowers said she never heard what mattered most to her – how much affordable housing will replace the 4,000 razed (or planned to be razed) dwellings.

“They call this a celebration, but it’s not a celebration to demolish houses, even bad houses in poor neighborhoods,” she said. “Demolishing buildings without a plan is not a good idea. I’m waiting to hear the plan.”

In their speeches, Hogan and Young steered away from the question of affordable housing. In fact, very few sites leveled by Project C.O.R.E. have so far seen new housing, although a few parcels have been equipped with playgrounds and rudimentary parks.

Only a few sites leveled by Project C.O.R.E. have seen new construction.

Instead, both politicians stressed that government is partnering with non-profits and private investors to develop commercial ventures, such as the restoration of the Hoen Lithograph Building in East Baltimore and the not-yet-started redevelopment of Madison Park North in Reservoir Hill.

What’s more, C.O.R.E. has morphed into an important crime-fighting tool, according to Hogan.

Starting last year, he said, “I directed the Maryland Department of Housing and Community Development to work with city leaders to identify and prioritize those decaying and dangerous vacant and blighted properties [that] were located in areas with the highest violent crime and where most of the criminal gang activity was taking place.”

While the governor as good as declared that poor neighborhoods have turned the corner thanks to his demolition program, Flowers was not so sure.

“My big question is, who is going to have access to these vacant lots? Is the state and city just trying to attract the developers? Is any of the land going to be an opportunity for homeless people to get some shelter?” 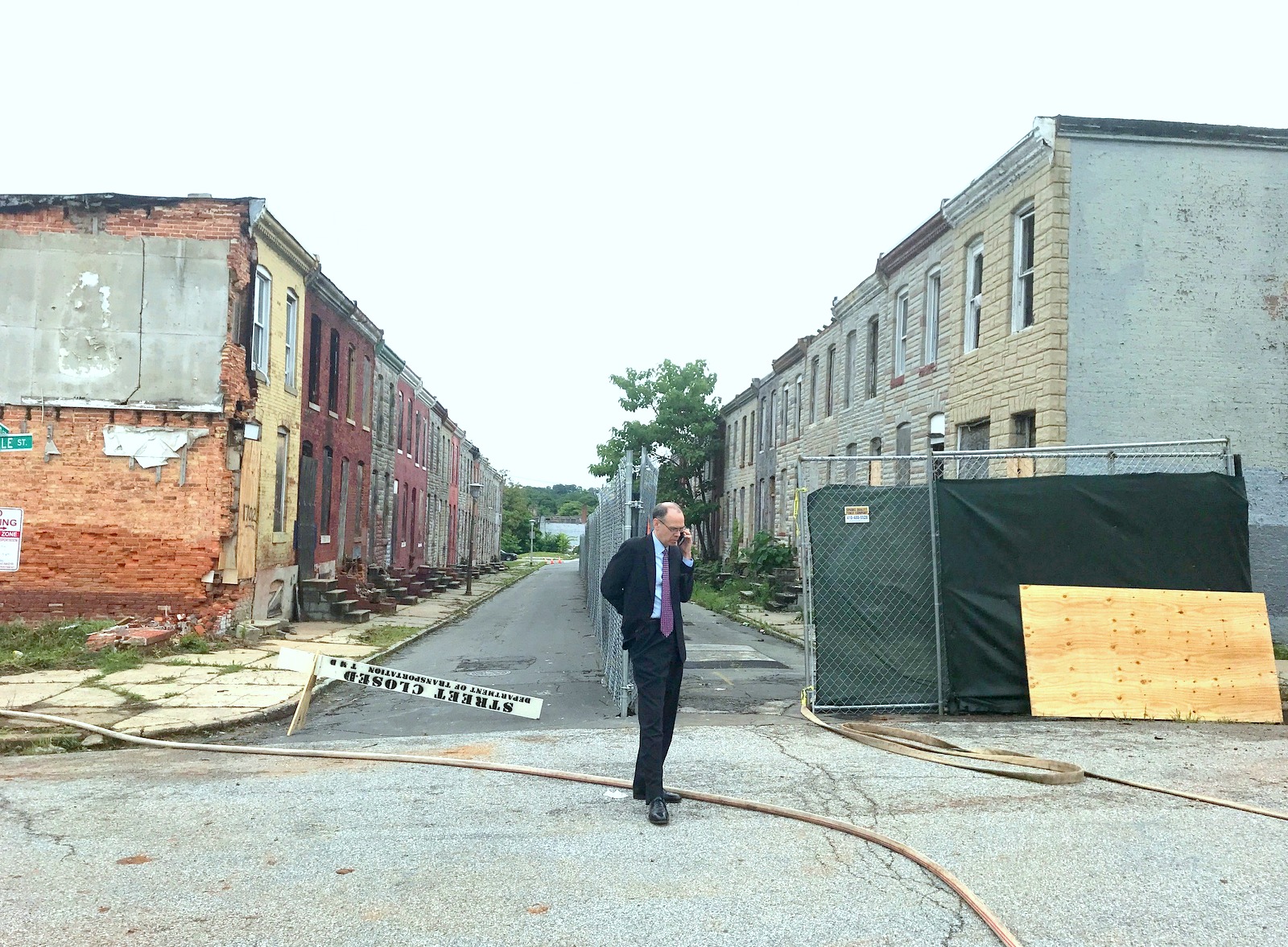 What happens after the Bradford Street houses are knocked down? According to the city, the site will be seeded with grass and “land-banked” for future undetermined use. (Mark Reutter)