With the stench of unflushed toilets filling the air, Baltimore’s Poe Homes seemed like a public health disaster zone.

Bypass water lines snaked along the streets, portable toilets were everywhere and the ground was littered with the empty boxes from the new toilets the Housing Authority is now using to replace the malfunctioning ones they had recently installed.

The strain of all this on local residents was showing yesterday, the eighth day since water service went out at this city public housing complex.

Asked about the past week, resident Renee Long described it as “pure hell.”

City workers had reported restoring water service late Saturday after the June 17 pipe break. But this week with water pressure still low at many units, the crisis was far from over.

Many faucets were only producing a trickle of water, and many toilets were not functioning. 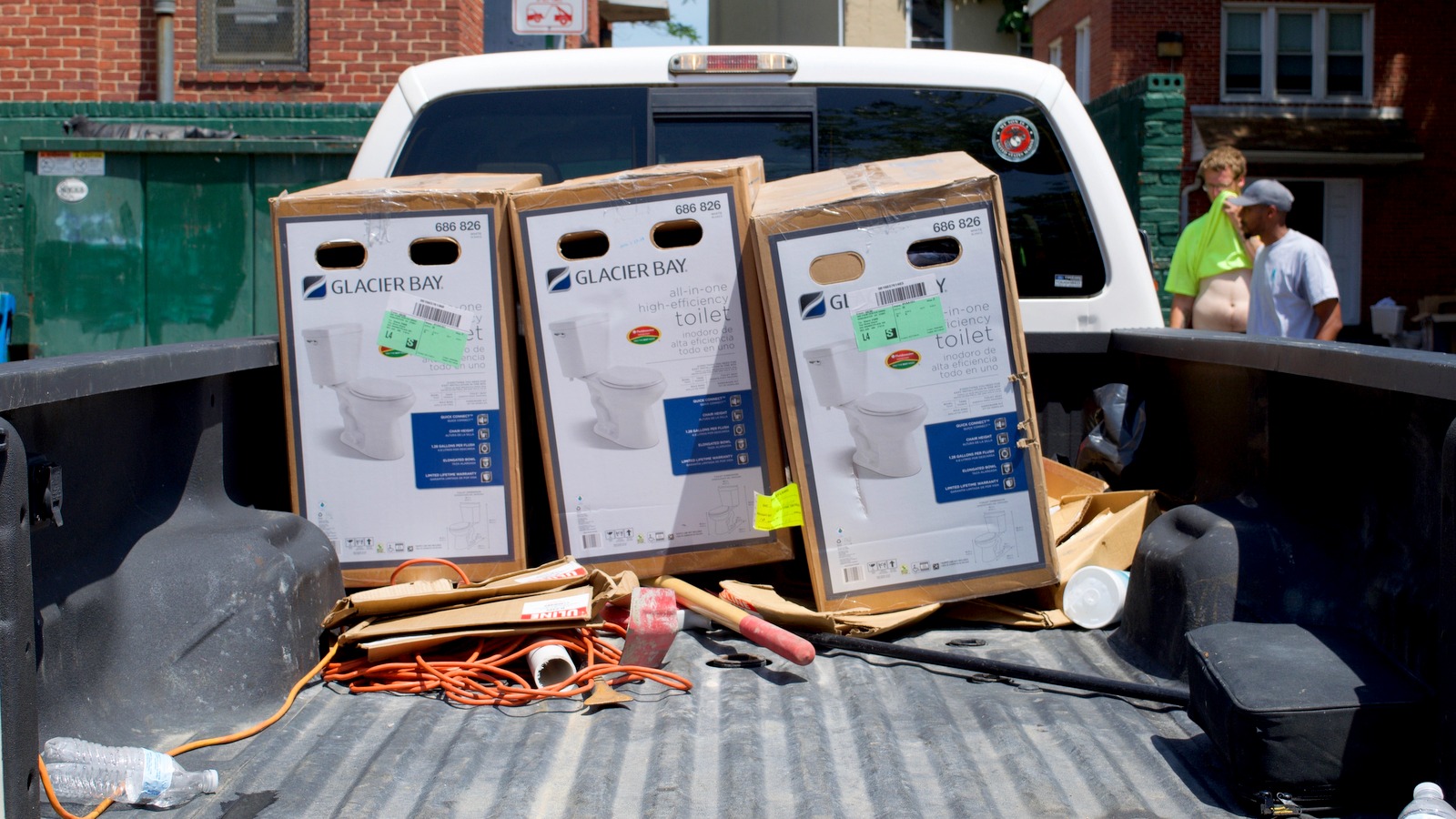 Boxes for new toilets to replace the low-flow toilets that the Housing Authority recently installed at Poe Homes. (Lizzie Kane)

Over the last week, the neighborhood has been forced to get water from fire hydrants, accept rationed water from the leasing office – a gallon for each household, at first – and use donated water that activists and other individuals were dropping off for their daily household routines.

Keeping toilets clear has meant dumping buckets of water into them, residents said. There have been reports that some resorted to scooping feces from the bowl.

Long, who has a bad back and lives on the second floor, has depended on neighbors to carry cases of water up to her. Seniors and people like her were among the many Poe Homes residents facing health challenges even before the water went out.

Asked last night if the Health Commissioner Letitia Dzirasa had visited Poe Homes – or if anyone from the Health Department had been onsite – department spokeswoman Mona Rock said no.

“I don’t believe she has been,” Rock said. “To streamline things, they’ve had one agency take the lead. I haven’t heard of any calls for our support.”

Rock called later to add that while Dzirasa did not visit Poe Homes, she and other Health Department staff had been in touch with city agencies to offer assistance on the Poe situation via phone and in-person meetings.

“Been calling for days”

The conditions at Poe Homes have been disturbing, but even more so the lack of response to the crisis by the media and by City Hall for days, said Karsonya “Kaye” Wise Whitehead, associate professor of communications at Loyola University.

“There was a real breakdown here,” said Whitehead, referred to as “Dr. K” by callers to her WEAA-FM radio call-in show.

Alarmed by a video on Twitter showing people at an open hydrant catching water in kitchen pots (posted late in the week by Fox 45’s Keith Daniels), Whitehead spent Friday at Poe Homes to see the situation herself.

One of the first people she met was the woman whose SOS on Facebook was what had gotten Daniels’ attention.

“She said, ‘We’ve been calling the mayor’s office for days and no one has responded. The water went out last Monday, the city workers had gone home and we’re here with no water,’” Whitehead recalled.

They said, ‘Dr. K, we’re not homeless. We have jobs. How can they treat us like this?’” said Whitehead, who went home and tweeted a scathing account of what she had seen and heard. 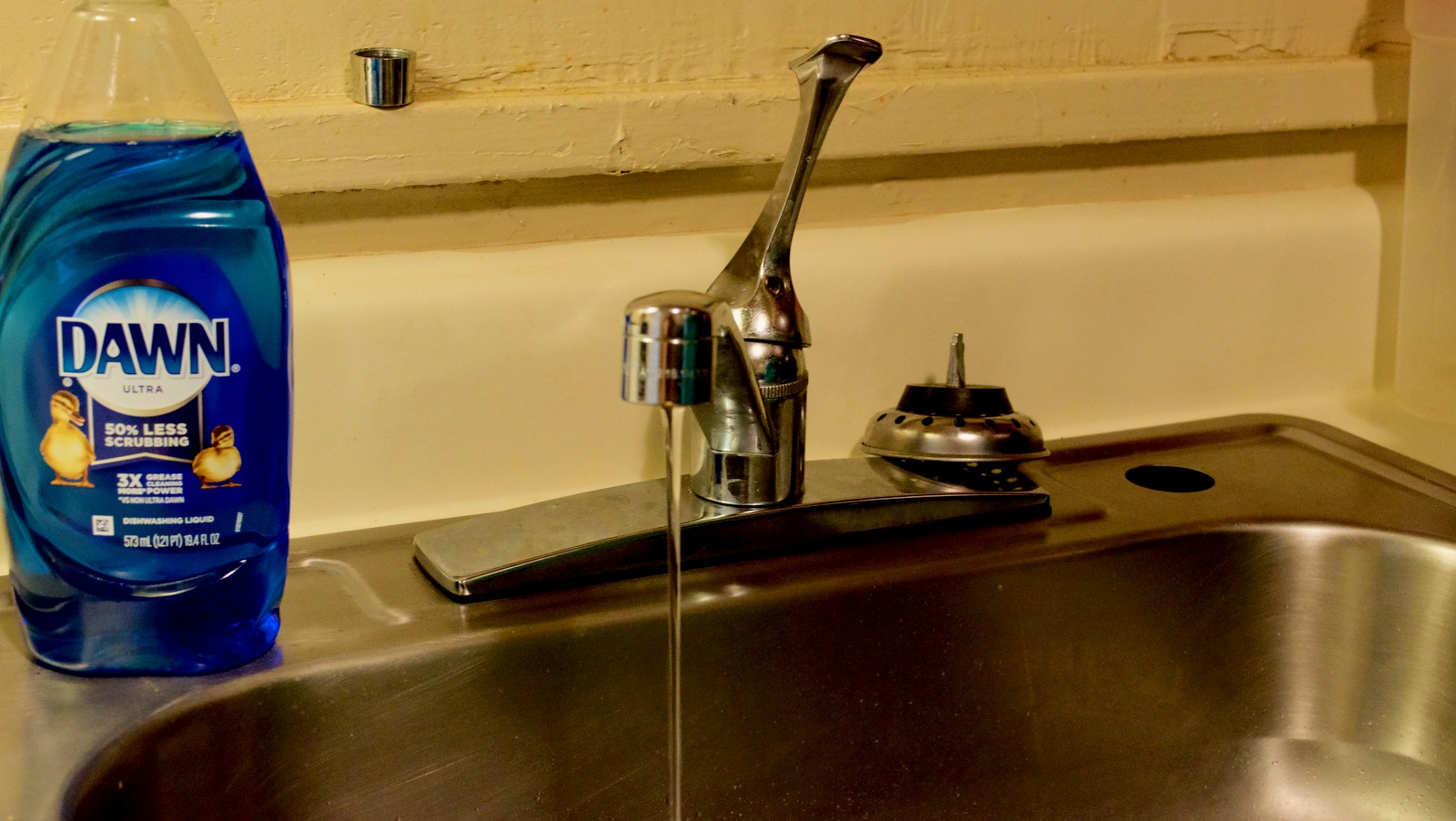 This was how much water one resident’s kitchen faucet produced yesterday. (Lizzie Kane)

Mayor Young issued an apology for the outage on Friday, calling it “completely unacceptable” and describing how the city was responding with portable toilets and more.

“We have made it a priority to make contact with vulnerable residents to offer additional assistance,” Young’s Facebook post said. “We currently have the Tenant Association and social workers on site and they will be there throughout the night.”

His Twitter feed showed photos from over the weekend depicting public works officials meeting with residents and going door-to-door in the neighborhood.

“We are trying to accommodate them all. We have canvased every single apartment. . . I have lived here for the last 96 hours,” Nick Calace, of the Housing Authority of Baltimore City (HABC), told The Brew yesterday. 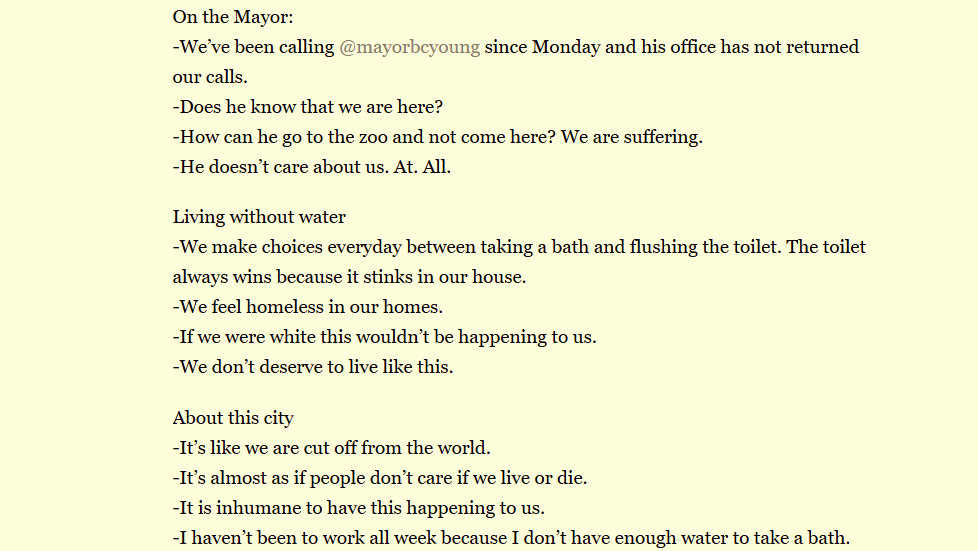 Tweets by @kayewhitehead about the Poe Homes water outage.

The Brew, however, was not allowed to witness HABC’s direct interactions with residents yesterday and was told to leave. Asked why the media was barred from the meeting, a staffer said that “confidential information was being shared.”

“There has been a sense of cascading failures out there, and it’s more than any of us anticipated or expected,” spokeswoman Ingrid Antonio said, addressing the reporters.

Residents coming out of the meeting, some of whom thought they were going to be offered temporary housing, told The Brew they had been informed there would be none at this time.

“We have extended the opportunity to many and all of our residents. . . to relocate,” Antonio said, adding that only residents with no running water in the household whatsoever could be relocated. 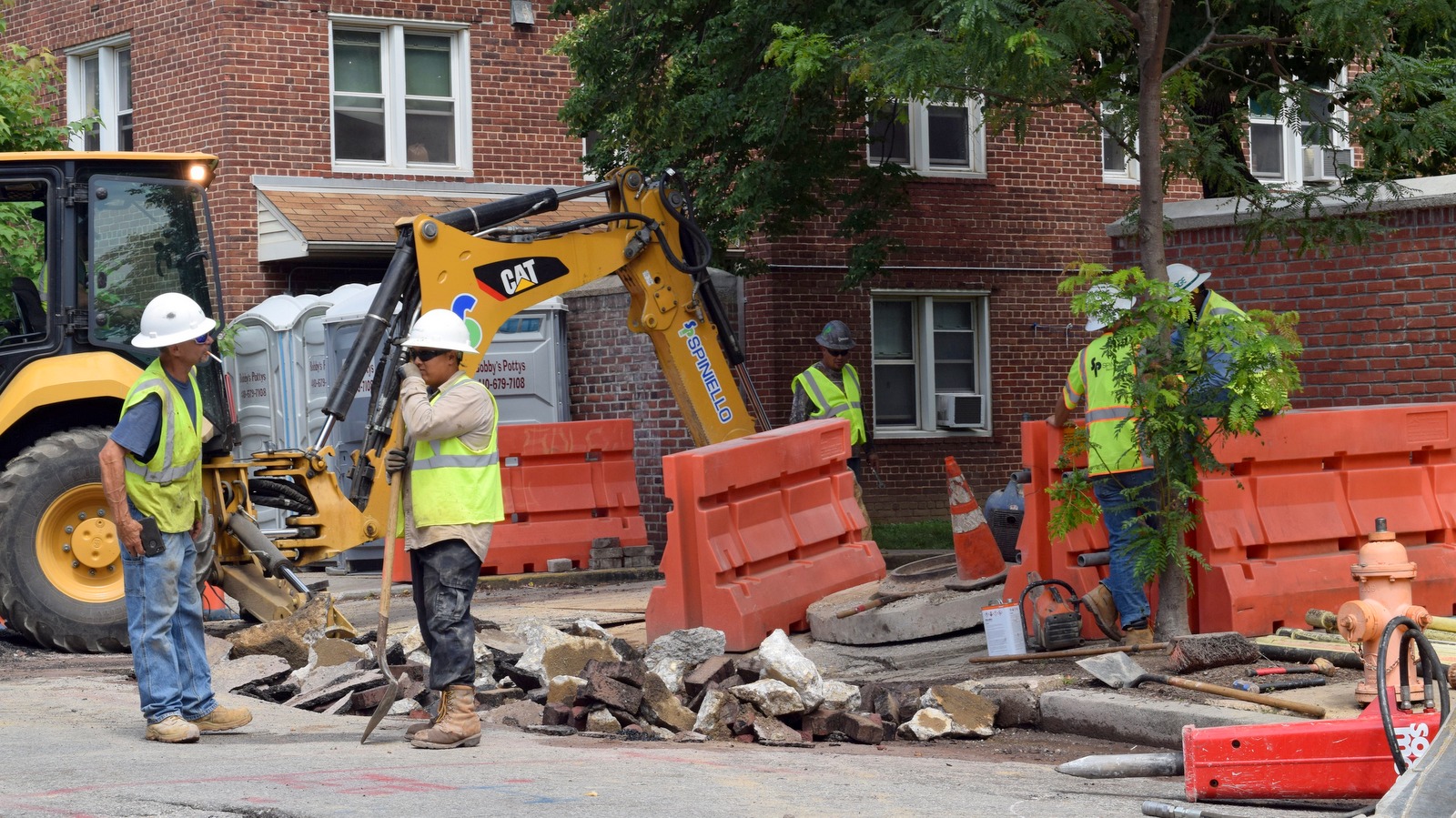 One week after the water break, workers were still on site at the Poe Homes. (Lizzie Kane)

In an email last night, Antonio said that “none of our residents are currently temporarily housed.”

Asked about reports that residents raised a question at the meeting about donated water having been recalled, Antonio said, “We have determined that water the we have and the water that we have been giving out was not subject to recall.”

Would residents still have to pay full rent despite the conditions in their units, The Brew asked Antonio. “Yes,” she said.

Antonio said HABC will be replacing 288 toilets that it recently installed at Poe that have malfunctioned and proven inadequate with the complex’s lingering low-flow problems.

She was unable to provide the cost of the low-flow toilets that HABC had installed across its city housing units.

Lester Davis, spokesman for the mayor, said all the toilets are expected to be installed today and that DPW was hoping to increase water pressure by back-flushing water lines “in order to dislodge and remove any blockages as part of the connection of the booster pumps.”

Although many were disappointed or angry about the city’s response, there was widespread praise for individuals and organizations who have come from near and far bringing cases of water bottles, toiletries, cleaning supplies and food.

Transportation is being provided – every 30 minutes – to and from University of Maryland, Baltimore, where residents can shower between the hours of 10 a.m. and 6 p.m.

“When they say people don’t have heart or feeling anymore in Baltimore, they are truly wrong because we got more help from social media, from strangers all the way from Chicago, New York; we have had donations come in from everywhere,” Long said. 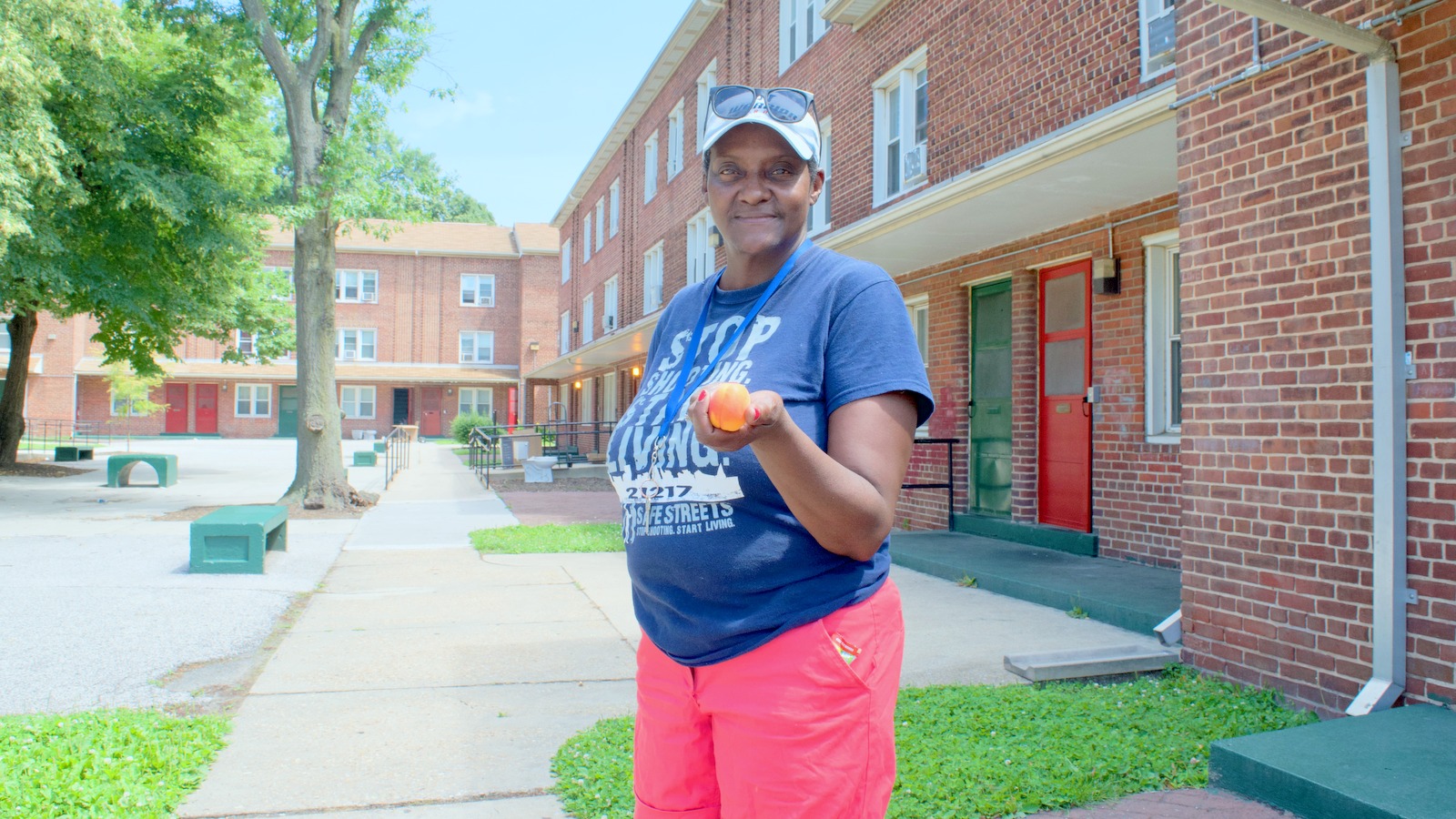 Renee Long said she has needed neighbors to help her by carrying heavy cases of water to her second-floor unit. (Lizzie Kane)

She said Poe Homes residents have gotten more help from these “strangers” than “the people that are supposed to be in charge of this.”

Individuals and organizations from across Baltimore should be recognized for stepping up to help, said Thompson and Leslie Ware, president of Poe Homes Tenant Council.

“When they say black people don’t stick together, they damn lie,” Ware said, with Thompson adding, “Yeah, ’cause we are sticking together in the Poe Homes.”

If people want to help further, Ware said, the Tenant Council (810 West Lexington Street, Suite 1, or 443-776-0274) could use donated food for the neighborhood’s summer program, which had been scheduled to start yesterday.

“We have 150 children that were depending on lunch and breakfast,” Ware said.