City officials have declared that the crisis at Poe Homes – where residents had no water or working toilets for nearly a week – is over, and portable toilets placed there for residents to use were being removed.

“We are pleased to report that the Housing Authority of Baltimore City (HABC) is standing down from its emergency response,” a spokesman for Mayor Bernard C. “Jack” Young said in a statement, asserting that “all occupied units have running water and sufficient pressure.”

But at this West Baltimore public housing complex, where at least one woman had low water pressure in her kitchen and no hot water yesterday, residents aren’t ready to let what happened go.

“We should be compensated on our rent for what we went through,” said Miketa Johnson, who has lived at Poe Homes for 35 years. 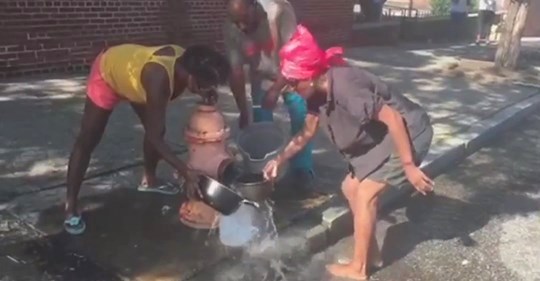 Poe Homes residents getting water from an open hydrant. (@KeithDFox45)

She and two other women agreed, saying they have been told by Poe’s managers that the water is safe to bathe in, but were warned that they should not yet drink it.

“Up until yesterday, it was brown with dirt and crumbs in it,” one of them said, explaining that she still is drinking bottled water and goes to her mother’s place in Park Heights to bathe, fearful of the rashes she has heard some got.

The water is safe to bathe in, but not to drink, residents say they were told.

While residents risk eviction by withholding rent, they are right to protest having to pay fully after what they went through and are still experiencing, said Peter Sabonis, former director of advocacy at the Maryland Legal Aid Bureau.

“Of course, they should be compensated. And HABC [the Housing Authority of Baltimore City] would do well to take action now, through a rent reduction to head off lawsuits,” added Sabonis, now director of legal strategies at the National Economic & Social Rights Initiative. 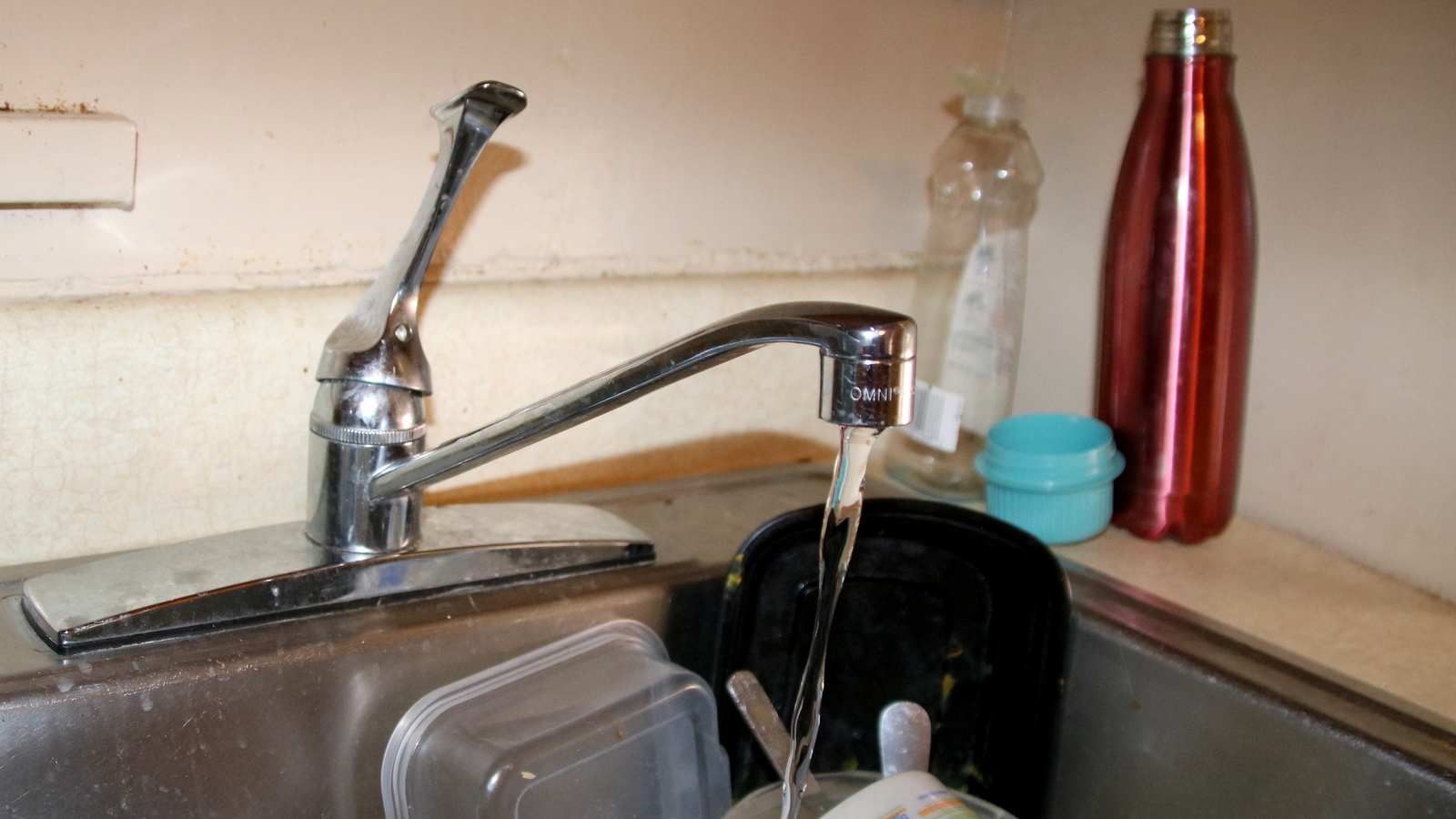 At Poe Homes yesterday, Stacey Smith’s kitchen water flow was weak, and there was no hot water. (Fern Shen)

Possible compensation is just one lingering issue in the aftermath of the water main break that occurred on Monday, June 17, at the 300-unit complex, leaving residents without water for drinking, cooking, showering or using their toilets.

Residents had to dump buckets of water into toilets to flush them. The smell of human waste was in the air inside and outside the complex for days.

City workers finally got the water flowing late Saturday night. They worked over the weekend to replace toilets, and officials declared on Tuesday that the water pressure was good.

But many have criticized City Hall for failing to show up for days, letting the outage drag on longer than it would have in more affluent neighborhoods.

“We hope this fix holds,” tweeted Morgan State University professor Lawrence Brown. “Now the question is, will HABC preemptively deduct at least a week’s worth of rent from ALL residents, according to your own policy?”

“If HABC or the privately owned/managed site can neither repair the defect within 24 hours nor offer alternative housing, rent shall be abated in proportion to the seriousness of the damage.”

From the Housing Authority of Baltimore City Policy Manual.

Lawyers who were contacted by The Brew said the main legal avenues open to residents seeking compensation are lengthy, risky, involve going to court and are best pursued with the help of an attorney.

Asked about escrow, Sabonis called it “an imperfect and poor tool.”

He said Baltimore has an “implied warranty of fitness” law that, in theory, could bring public housing tenants some relief. “But it is routinely ignored in court,” he added.

“What does the mayor say?” a housing attorney asked.

Shah noted that attorneys from the Public Justice Center were at Poe Homes yesterday and are still assessing the potential for litigation.

But he and others consulted said residents face a steep challenge.

“If HABC doesn’t do the right thing and follow its own policy, they will have to go to court and/or file individual administrative grievances to get the abatement,” a veteran housing attorney said, warning that the agency “almost never abates voluntarily.”

“What,” the attorney wondered, “does the mayor say?”

Young’s office, asked about the matter by The Brew, has yet to respond.

HABC, which has said all residents must pay their full rent, has not responded to the question about voluntarily giving the residents a break.

Outside of City Hall yesterday, speakers at a rally that drew about 40 people called for an apology from Young and David McMillan, director of the Mayor’s Office of Emergency Management.

“They seem not to be prepared,” said activist Leo Burroughs, adding that “poor folks and blacks are victimized” by the city’s failure to respond. “This was a man-made disaster waiting to happen, and the powers that be let it happen.”

“Next week it could be us – it could knock on any of our doors,” said Cheatham, past president of the Matthew Henson Neighborhood Association.

“What happened to the people at Poe Homes was despicable,” Baltimore NAACP president Kobi Little said outside of City Hall yesterday. (Fern Shen)

“Do we have to wait til somebody gets hurt?” asks the president of Poppleton Now.

Eaddy recalled a three-day water outage that Poppleton endured last year and a deep, dangerous pothole that she said the city took far too long to repair.

“Teenagers coming home from school were having to jump over this thing. I was calling and calling 311. Do we have to wait til somebody gets hurt?” she said. “These are the kinds of things we’re dealing with, that Poe Homes is dealing with.”

Eaddy concluded with the message that she and others at the rally say they get from City Hall’s neglect: “They are trying to displace us.” 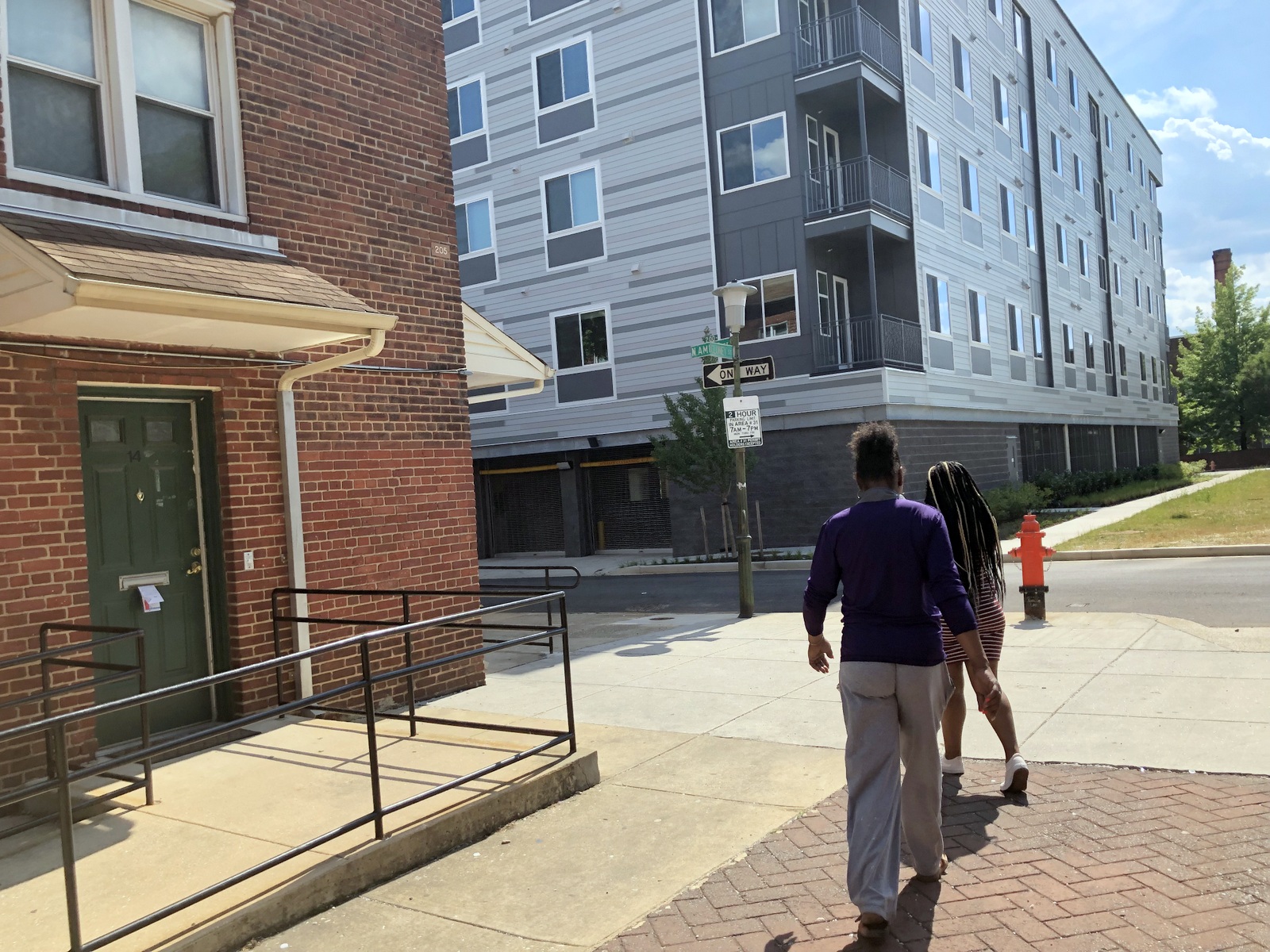