Baltimore residents will feel the pain of rising water and sewer rates as never before when the city finally sends out water bills delayed by the May 7 ransomware attack, a group of activists warned yesterday.

“People will be coming face-to-face with a bill that covers three or more months of water use. And on top of that, a new rate increase took effect on July 1.”

The Department of Public Works estimates a “typical” bill for a family of three at $98 a month, according to spokesman Jeffrey Raymond.

Between the 10% rate increase that went into effect yesterday and the accumulated cost of water consumed since May 7 – many households will be facing $300 or higher charges on their next water bill.

“This will be a true shock to many people,” Eckel said.

Raymond said the city’s water billing system is still crippled by the malware attack. No date has been set for when the system could go back online and start sending out bills.

To lessen future sticker shock, DPW is telling residents to set aside money for the next bill. Raymond said customers can mail to DPW a check or money order equal to their prior monthly bill. “Be sure to include your account number,” he added.

Eckel called this approach tone deaf and high-handed. “When do people send in money for a bill they haven’t yet received? And telling people to put money aside isn’t very helpful because most people, including myself, live paycheck to paycheck.”

“The city will stumble into another crisis it hasn’t prepared itself for.”

Area residents that Eckel and her colleagues have talked to “haven’t really connected the [malware] attack to why they haven’t gotten their water bills recently. And city government hasn’t done much to educate the public by framing the attack as simply something that’s [impacted] employees sitting in their offices.”

The net result, Eckel predicts: “The city will stumble into another crisis it hasn’t prepared itself for.”

“People will think their bill is wrong, which, given DPW’s billing history, might be true,” she continued. “DPW will be overwhelmed, and soon the attack will have claimed another victim – an unhappy, stressed-out public.”

Yesterday, two dozen affordable water advocates assembled in front of City Hall to protest the latest series of rate hikes approved by the Board of Estimates, which will hike water and sewer costs by more than 30% between now and July 2021.

“I never thought I would live to see the day where we were fighting for something like water,” Mary Kambic, a city resident for 35 years, told The Brew.

“I remember back when our four children were at home. If we had problems paying, we would let it go for two or three months. Now we can pay for it, but it is really high,” she said.

Water rates in the Baltimore region have increased every year since April 2002, often at or near double digits. (Department of Public Works)

With organizers holding signs reading “Water is a human right” and a giant cardboard water faucet with dollar signs dripping from the tap, the protesters said that 20 years of ever higher charges have placed huge burdens on senior citizens and the poor.

“Rate hikes without real, comprehensive affordability in place is nothing short of injustice,” Eckel said, pointing to a United Nations study that found that water is not affordable if it costs more than 3% of a family’s income.

Under the latest rate increase, more than 40% of Baltimore City residents will be charged above this limit, Eckel said, noting that along with higher priced water, comes inaccurate billing and repeated water-main breaks.

She expressed solidarity with the residents of Poe Homes who went without water for about a week and are seeking compensation.

Yesterday also marked the launch of DPW’s Baltimore H2O Assists program, a system slated to reduce the costs of water and sewer usage for low-income residents.

According to DPW, the program will drive down the bill for customers with incomes at or below 175% of federal poverty guidelines by $37 a month.

Households with incomes at or below 50% of the poverty level will receive an annual credit of $257, to be applied to their water bill, which would result in a $21 a month savings on average. DPW calls the program “a sound and generous way of addressing the genuine concerns over water bill affordability.”

However, Ellyn Riedl, an attorney with the Maryland Volunteer Lawyers Services, warned of false advertising.

She said she called DPW yesterday about signing up a 91-year-old client, only to be told she would have to come downtown to the Abel Wolman Building to get an application because the assistance program was not yet online.

When Riedl arrived, she was given a “fact sheet” and told to put her client’s name on a list. “Someone from the Community Action Center will follow up,” she said she was told. No time estimate was given about when the follow up would occur. 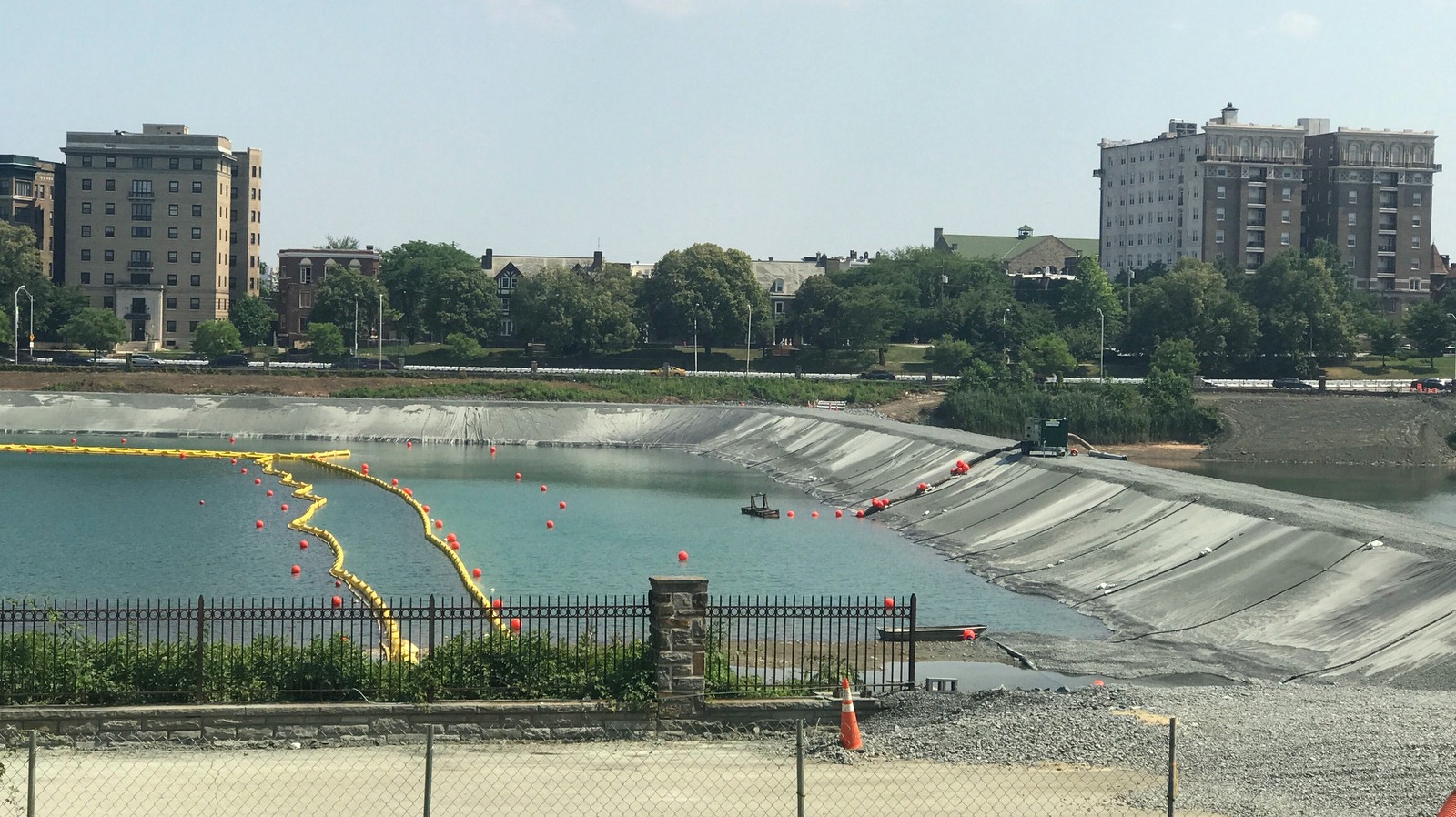 BIG COSTS PAID BY CUSTOMERS: Druid Lake last summer when DPW was draining the lake to get rid of contaminants stirred up by an ongoing project to build underground storage tanks for fresh water. (Mark Reutter)

Bill 18-0307, currently before the City Council, would base a resident’s water bill on a percentage-of-income basis and establish an Office of Customer Advocate to provide better dispute resolution for billing inaccuracies.

“The time is now to address the injustice and irresponsibility of water billing in this city,” Amster said. “Delay will lead to additional people experiencing homelessness and additional households drowning in water debt.”

The bill, introduced by the full Council and Mayor Bernard C. “Jack” Young when he was Council president, is scheduled for another “work session” on July 25 before the Taxation, Finance and Economic Development Committee.

Eckel said she expects DPW to propose amendments that may weaken the bill.

“We don’t want to weaken the intent of the bill,” she said. “But we are willing to work with [DPW] to try to find ways that we can make the objectives of the bill work better for them.”

She said she hopes the measure will pass the committee and go before the full Council in October.