A scene of infrastructure apocalypse played out near the convention center in downtown Baltimore this morning.

Conventioneers gaped as pieces of streetscape teetered at crazy angles – chunks of brick pavement, a TRAIN COMING signal on a pole, a manhole cover – as contractors, city workers and police swarmed around the collapse site, at the intersection of Howard and Pratt streets.

The sinkhole, which half swallowed a Light Rail platform there, was reportedly caused by the same water main break responsible for the massive flooding near M&T Bank Stadium on Monday.

Other byproducts of the pipe break: a CSX train derailment and an alarming plume of yellow-brown silt that clouded the Inner Harbor.

But according to workers at Jimmy John’s at the cordoned-off intersection, infrastructure woes are causing misery in many low-profile parts of town – the parts where they live.

“It’s not just here, it’s all over the city – the water and everything going out,” said one employee, recounting how he and his neighbors at Armistead Gardens, in far east Baltimore, have been without water due to a (now fixed) pipe break.

“Where I live, we’ve just had our power go out,” another employee, Rob Sumler, said. “No refrigeration, no air conditioning.”

“It look like it breaking everywhere,” Mayor Young exclaimed today.

Another worker said that street closings made his morning commute a nightmare, taking him a half-hour to go a few blocks from I-395 to his parking garage.

“It look like it breaking everywhere,” the mayor exclaimed when asked by reporters about the city’s aging infrastructure. 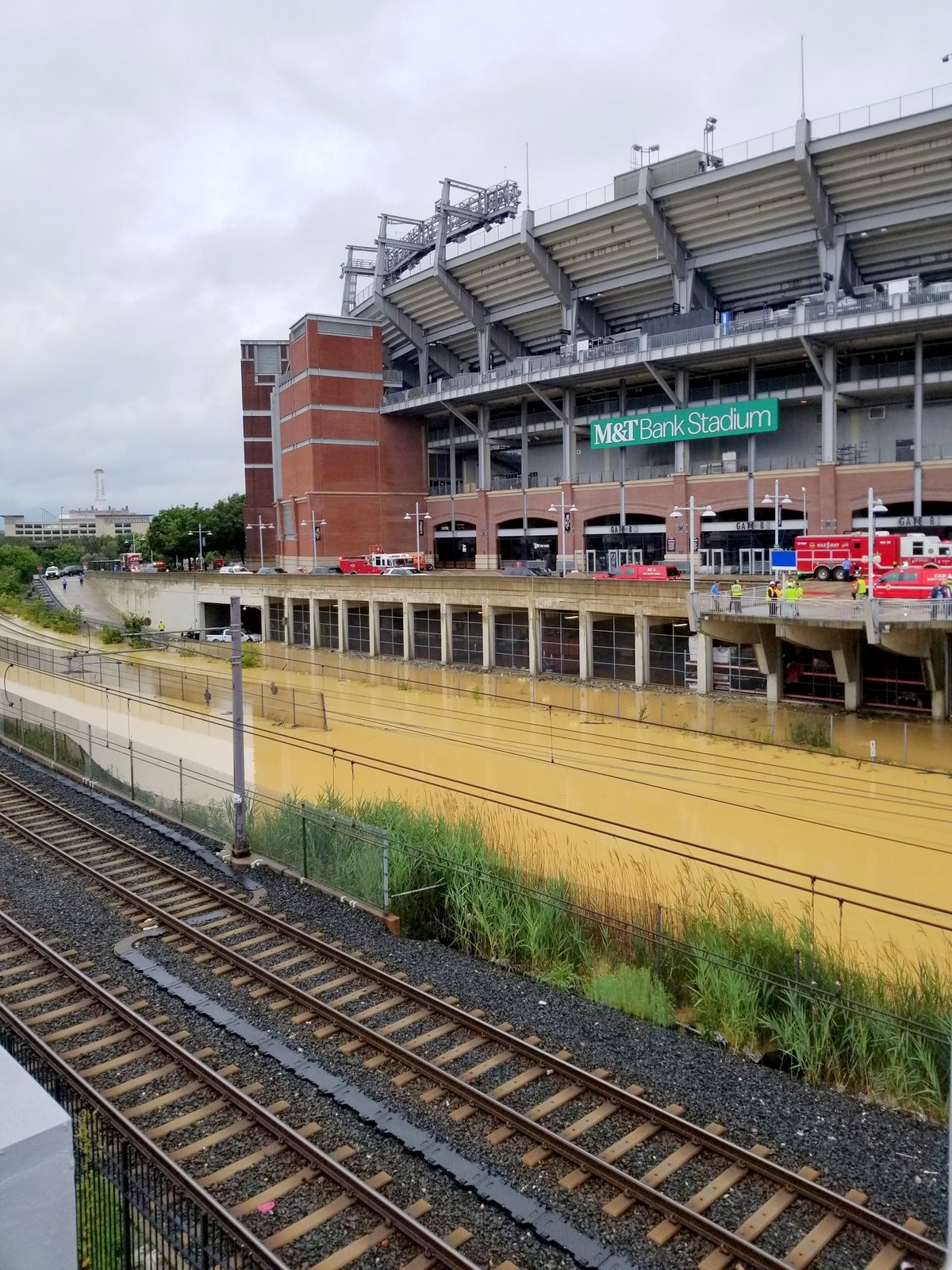 MARC train and CSX tracks were shut down Monday after a water main break caused flooding on the tracks near M&T Bank Stadium. (@Baltimore DPW)

He said the collapse of the Light Rail platform was caused by the same broken 12-inch pipe, located near Howard and Pratt streets, that triggered the early morning flooding of CSX tracks near the stadium on Monday.

That flooding sent silt into the Howard Street Tunnel, which caused a train to derail. No one was injured in the derailment. The silt also caused discoloration in Inner Harbor waters.

“What’s going on in this city?” asked a visitor from North Carolina.

Officials could not say whether recent heavy rainfall was a cause of the pipe break and subsequent flooding. 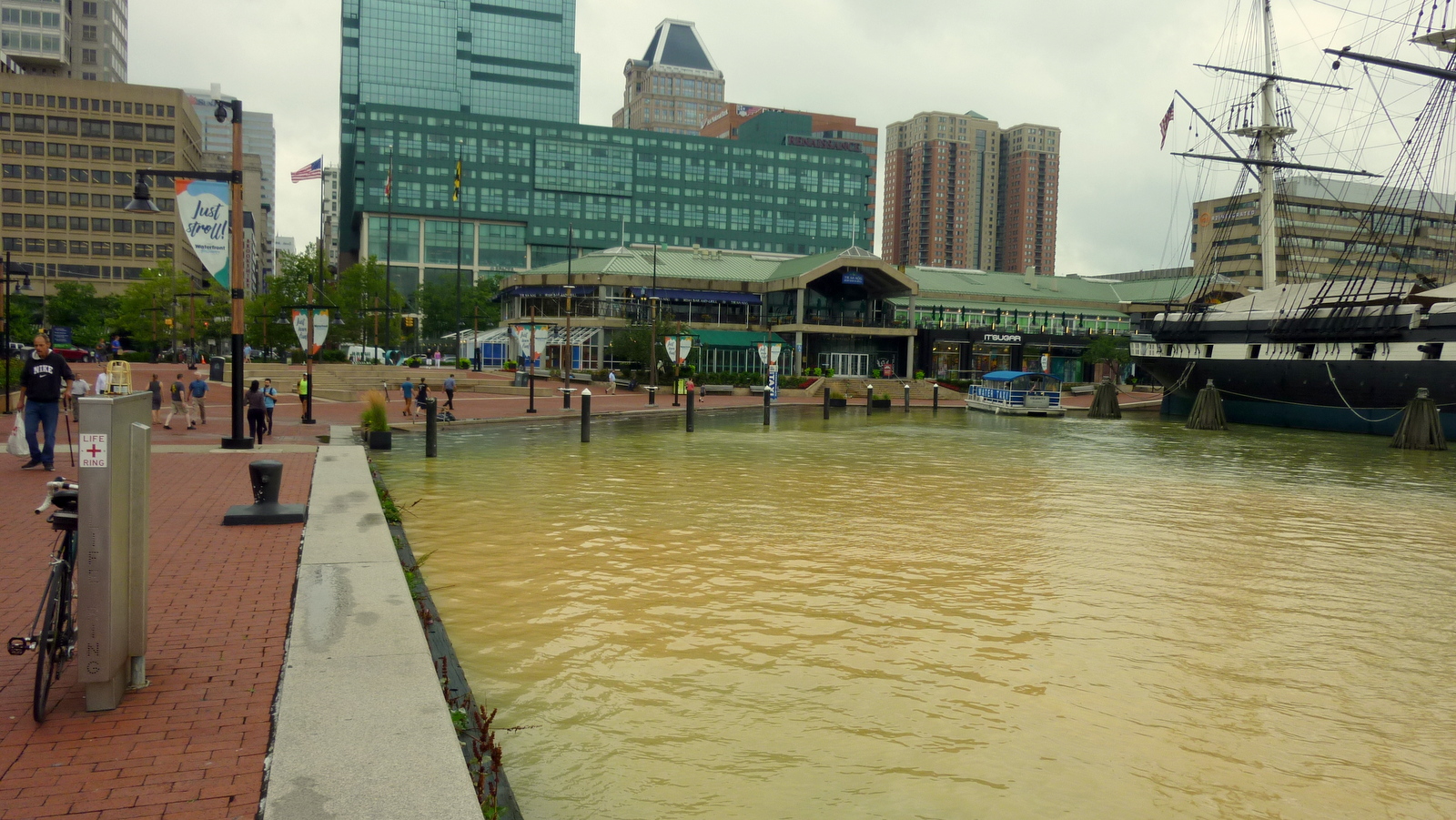 But they were aware that the pipe break was eroding the substrate below the street.

“We knew that area was compromised,” David McMillan, director of the Mayor’s Office of Emergency Management, said yesterday.

This is the area where a city employee, working on an underground electrical conduit, was injured Monday when a manhole collapsed on him, officials said. The worker remains in the hospital today, Chow said.

This morning’s platform collapse occurred as crews were in the process of removing the Light Rail disability ramp because of underground “voids” caused by the flooding, officials said.

The area around the pipe break must be stabilized before vehicles are allowed on Howard Street, which has been closed off for several blocks.

“Our focus is making the area safe,” Chow said. 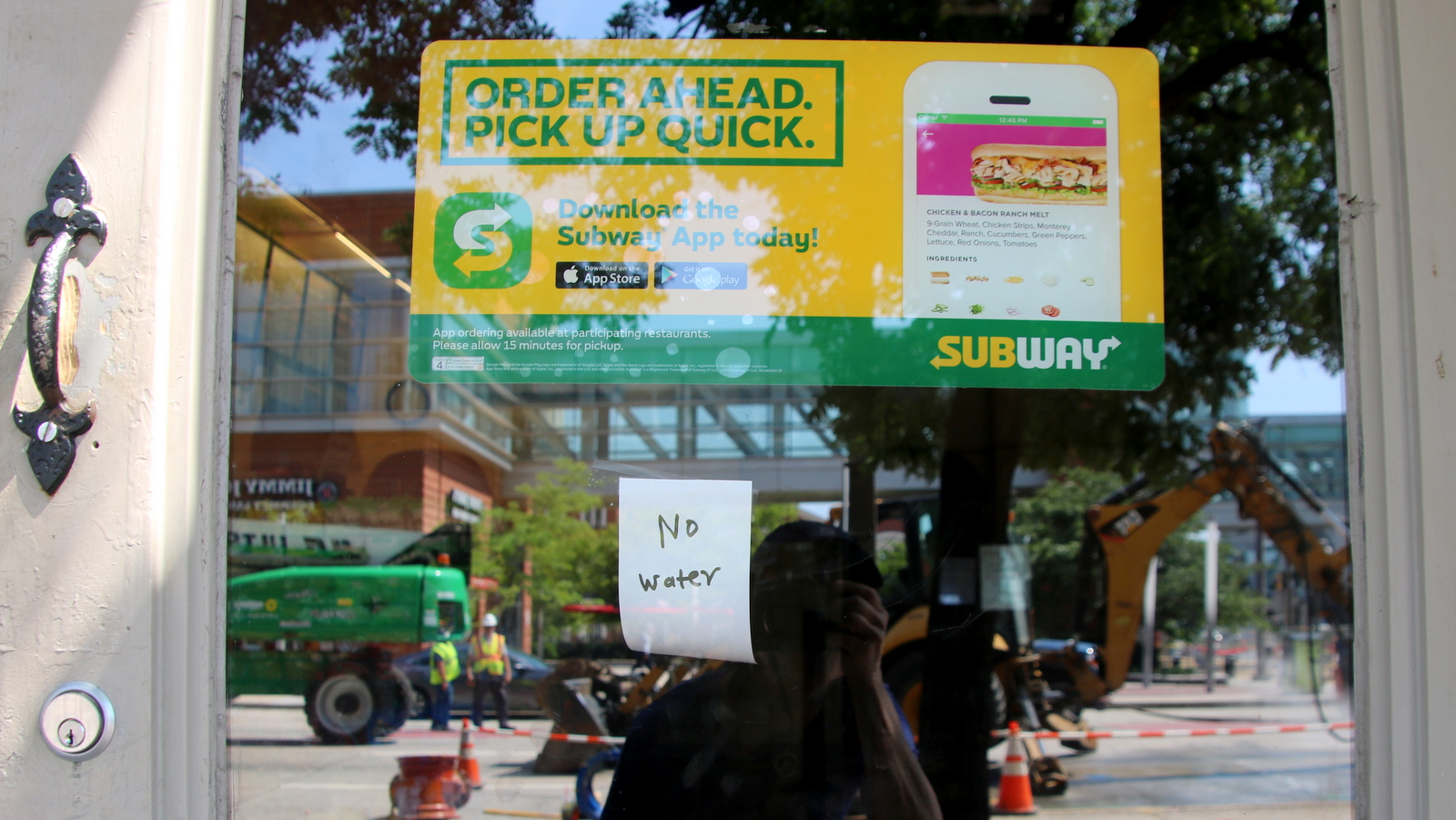 He said CSX ran a test train through the tunnel this morning and has resumed freight service with caution.

The Light Rail line, however, was suspended between Howard Street and Camden Yards, and officials predict it could be weeks before the line returns to full service.

Also on hold for the time being are the businesses without water along West Pratt Street, as crews work to repair the damaged and somewhat complicated area where water mains, sewer mains and storm drains come together.

“No water,” said a sign on the Pratt Street Subway that, like a Chipotle Mexican Grill and several other businesses, was closed today.

“We were surprised to see all this. What’s going on in this city?” asked Laureen Jones, in town from North Carolina.

After peering into several darkened restaurants, she and her husband headed over to Jimmy John’s for lunch.