Kevin Johnson’s Commercial Construction was named during a community meeting last night as a candidate to build townhomes on a parking lot in the Clipper Mill community near the Woodberry light rail station.

“That has not been finalized, but Commercial Construction has been working with us so far,” said Peter Garver, who heads the company that’s developing the townhouses for Valstone Partners, which is controlled by financier Larry E. Jennings Jr.

Garver had just presented the latest plans for the townhomes at 2001 Druid Park Drive to members of the Woodberry Community Association and was responding to a question at the end of the meeting about who would serve as contractor.

“You know about the scandals with them, right?” asked a member of the audience, apparently referring to the home renovation work that Johnson did for former mayor Catherine Pugh and his lack of progress on the $75 million Hendler Creamery apartment project in Jonestown.

“I’m not here to talk about anything besides this property,” Garver replied.

Earlier this year, Valstone named another Johnson entity, Commercial Development, to be the for-fee developer of another property it owns at Clipper Mill, the historic Tractor Building. 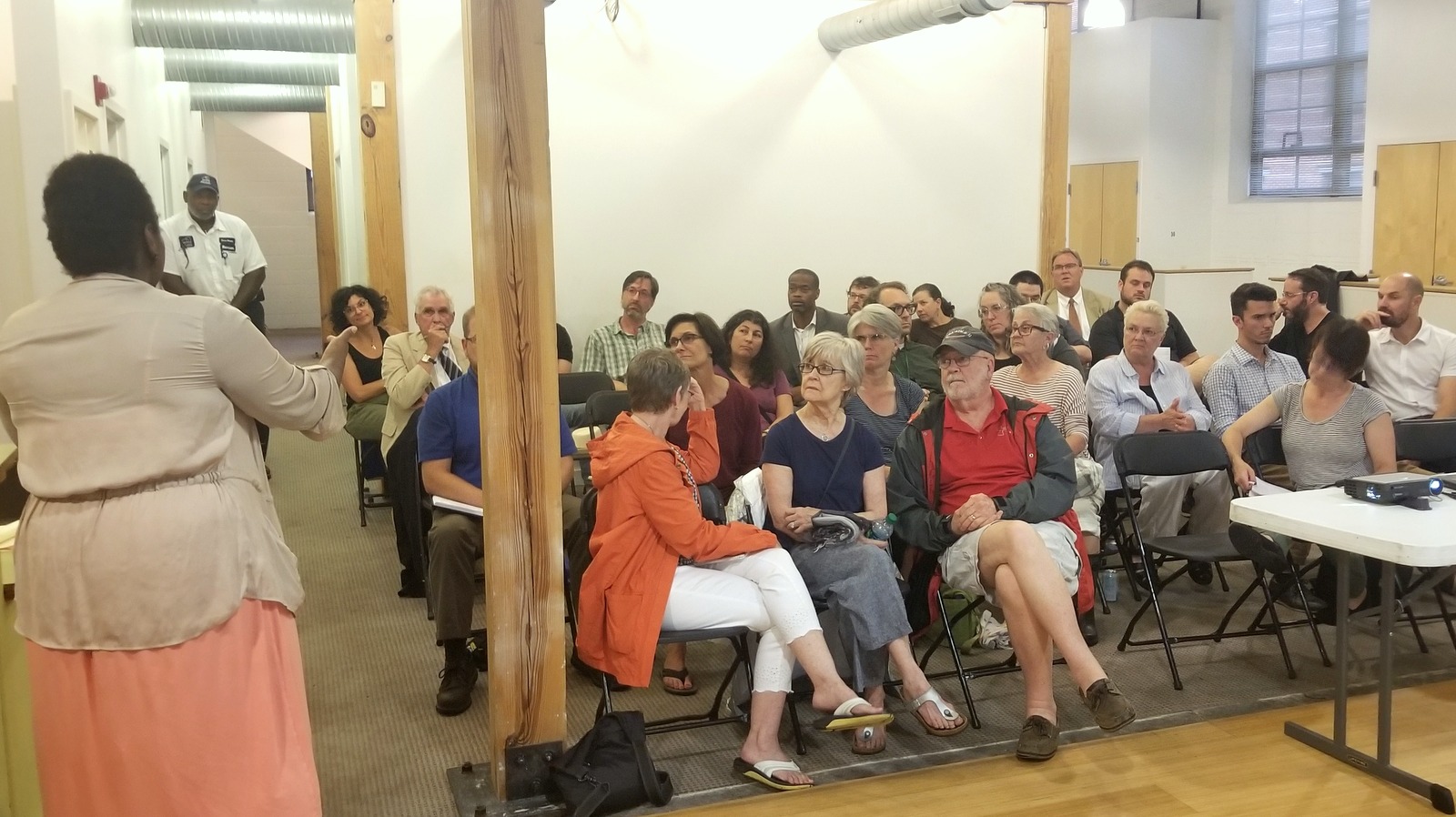 City planner Reni Lawal addresses Woodberry residents, some of whom said the project would worsen parking problems in the neighborhood. (Ed Gunts)

Garver said his team redesigned the townhouses at what’s known as the Poole and Hunt lot to reduce the number of residences from 52 units to 30, with 36 parking spaces on site and nine others nearby.

Despite some praise for the project’s design, the presentation triggered a sometimes heated discussion about the shortage of parking in the area and how this project might make it worse.

Several residents questioned whether the project, even with fewer units, complied with zoning requirements for the property. Reni Lawal, northern district planner for the Planning Department, said her superiors have taken the position that it does.

Jessica Meyer, a resident of the Millrace residences at Woodberry, noted that construction of the proposed townhouses will result in a loss of several dozen parking spaces at the Poole and Hunt site.

“Current parking is woefully inadequate to accommodate all the cars that need to park at Clipper Mill,” Meyer said.

“This lack of space, which is an issue now, will greatly be exacerbated by the addition of many more people and their cars,” she continued. “We are certain this will present real and devastating consequences for everyone who lives, works and visits this community.”

Several residents also questioned whether the residences as presented were even townhouses, noting that they actually consist of one unit “stacked” over one below. 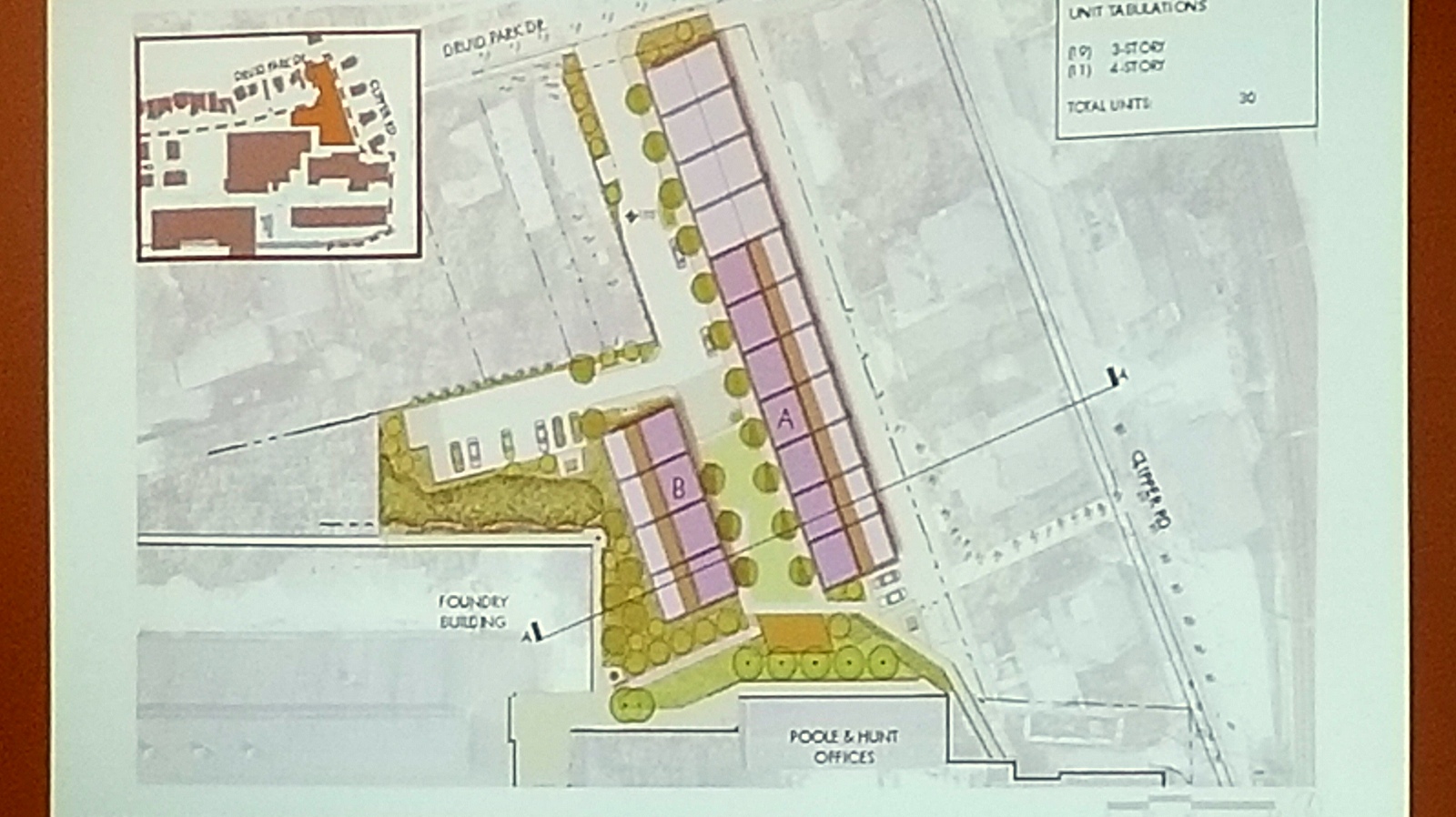 Thirty townhouses would be shoehorned into what is now a parking lot for the Poole & Hunt offices.  (ValStone Partners)

Attorney John Murphy, retained by some area residents, has argued that the project isn’t really a series of townhouses but rather a multi-family dwelling, and that it can’t be constructed without a major amendment to the Planned Unit Development (PUD) legislation governing construction at Clipper Mill.

“Although the proposal describes the use as townhouses, in fact they are not single-family attached dwellings,” Murphy wrote this week to Planning Director Chris Ryer. 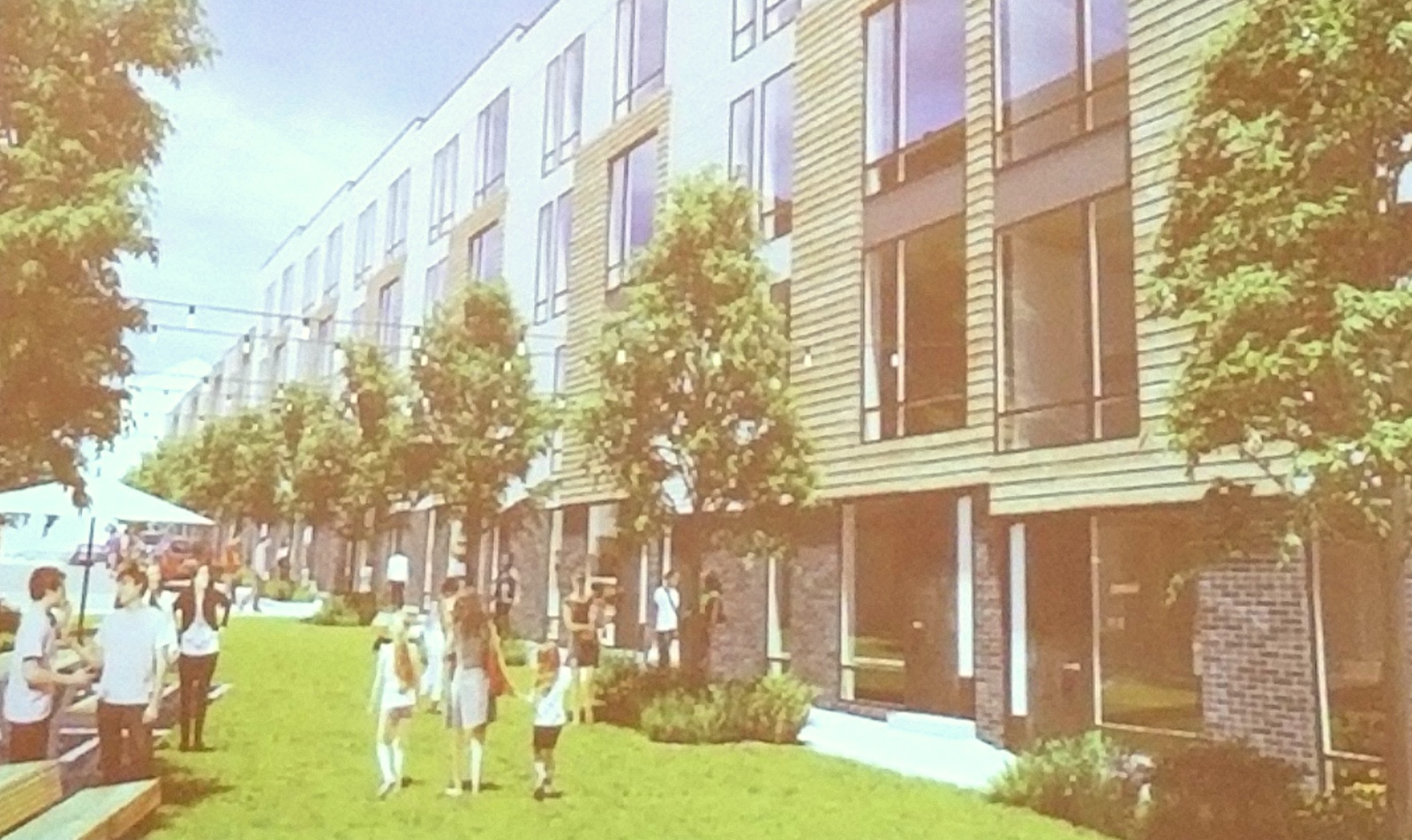 “There is no definition in our zoning code for what a townhome actually is,” she told the community. The code has definitions for other types of dwellings, including rowhouses and single-family homes, but not a townhome, she said.

Lawal offered her opinion that townhome is a term adopted by the housing industry to be the “antithesis” of rowhouse for marketing purposes. Because Baltimore’s zoning code lacks a definition, she said, “the Planning Commission will have to decide if these are townhomes.”

Garver and his design team are scheduled to present their revised plans this afternoon  to the Urban Design & Architecture Advisory Panel.

The UDAAP presentation is part of developer Jennings’ bid to obtain a construction permit for the development.