After watching a Baltimore-bashing episode of Fox & Friends, it probably took President Donald J. Trump all of 10 minutes to post those trash-talking tweets about the city.

But the turmoil he created churned for the rest of an otherwise sunny Saturday as politicians trumpeted their outrage, pundits parsed the politicians, and citizens smarted over the raw racism directed at their hometown by a U.S. president.

The dark tweets emerging from the White House were uninformed and hypocritical, and his words “no human being would want to live there” were especially hurtful.

But some of the response to Trump’s provocations rang hollow for activists like Lawrence Brown.

The Morgan State University professor observed that the urban ills that Trump mocked and condemned are owned by members of both political parties – and caused not just by structural and historical racism, but by the present-day failings of local politicians.

Largely “performative,” he called the response by the city’s elected leaders in a series of postings on Twitter, where much reaction to Trump’s comments played out.

“It’s wild to see local Baltimore and Maryland area politicians ‘defending’ Baltimore city,” Brown wrote, “when we local activists have to rally, march, protest and plead with THEM all the time to dismantle Baltimore apartheid and DO equity (instead of just talking about it).”

“I hate seeing West Baltimore being used as a political prop by both Trump and local politicians,” Brown added. 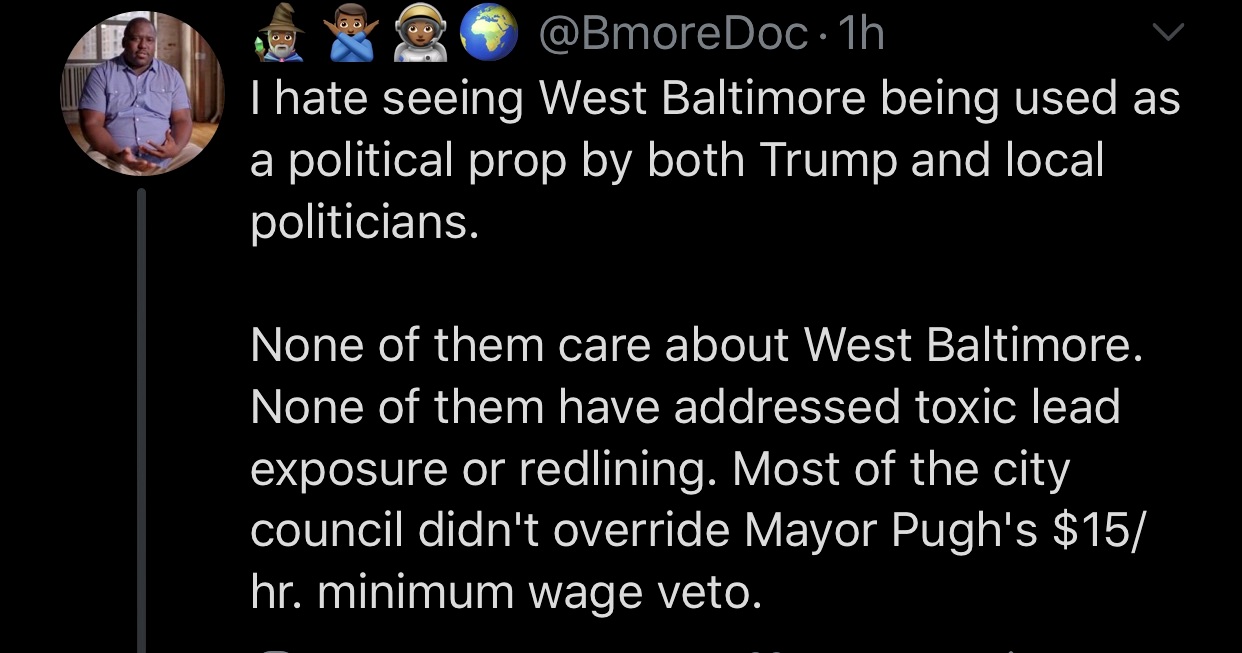 Trump had called Rep. Elijah Cummings’ 7th Congressional District, which includes half of Baltimore City as well as parts of Howard and Baltimore counties, “a disgusting, rat and rodent-infested mess” and Cummings “a brutal bully.”

Young and his fellow electeds, some activists pointed out, weren’t nearly so quick to act when it came to crises like the one at Poe Homes, the public housing complex whose residents recently went without drinking water or working toilets for nearly a week.

Nor did they muster the political capital to pass legislation like a $15 minimum wage bill that would have addressed the very blight and poverty that Trump held up for ridicule.

Brown had a laundry list of what he regarded as City Hall failures, including the $660 million TIF tax increment financing package for Kevin Plank’s Port Covington development “just 8 or so months after the 2015 Uprising.”

Likewise, he cited city leaders’ failure to find a replacement for the shuttered Mondawmin Mall Target, despite multiple trips by Young and other city leaders to the annual shopping center convention in Las Vegas. 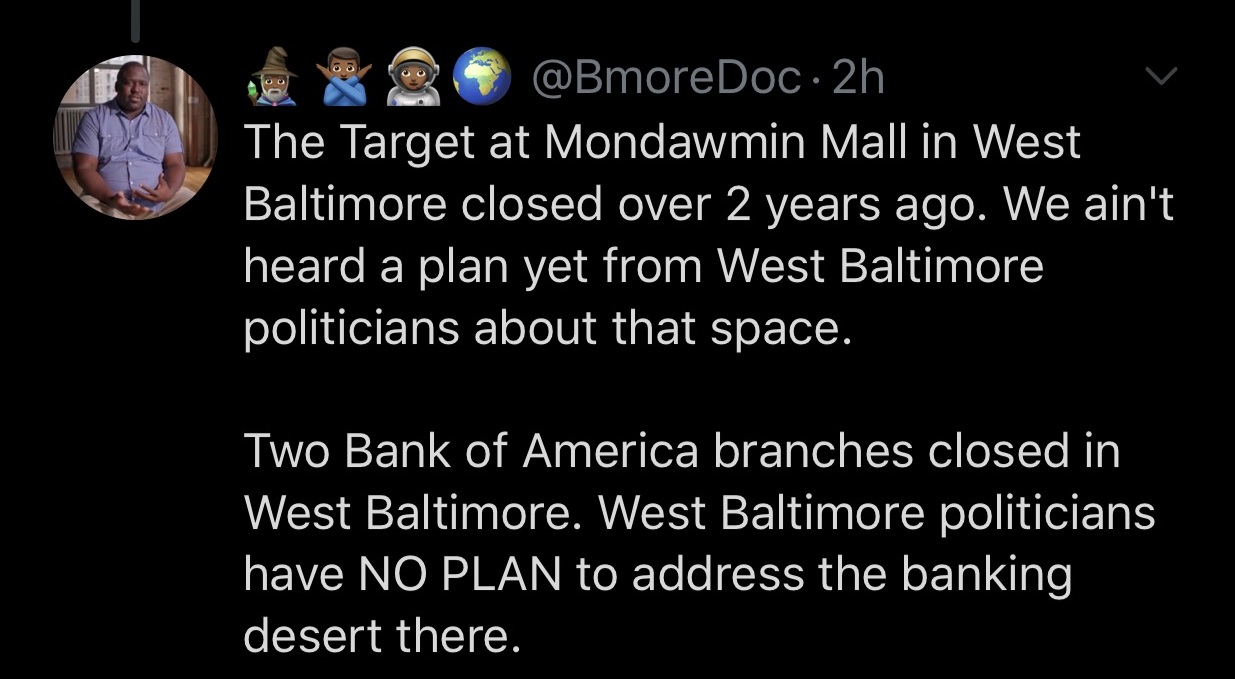 “We are so frustrated because you don’t see us,” said Karsonya “Kaye” Wise Whitehead, who hosts a radio talk show on WEAA 89.9 FM, in a Facebook post.

“Here’s hoping that all of the politicians/reporters/residents riding hard for #WeAreBaltimore will remember all of this love and good grace when the camera turns off and we are screaming and shouting and marching for change because Poe Homes is without water, our kids need YouthWorks jobs, our schools are deathly hot or freezing cold, we feel that our complaints are going unheard, our children are still suffering from lead paint poison and we rally behind our squeegee enterprisers.”

The late and pallid response by Republican Governor Larry Hogan that Baltimore “is truly the very heart of our state” also played poorly in the city. 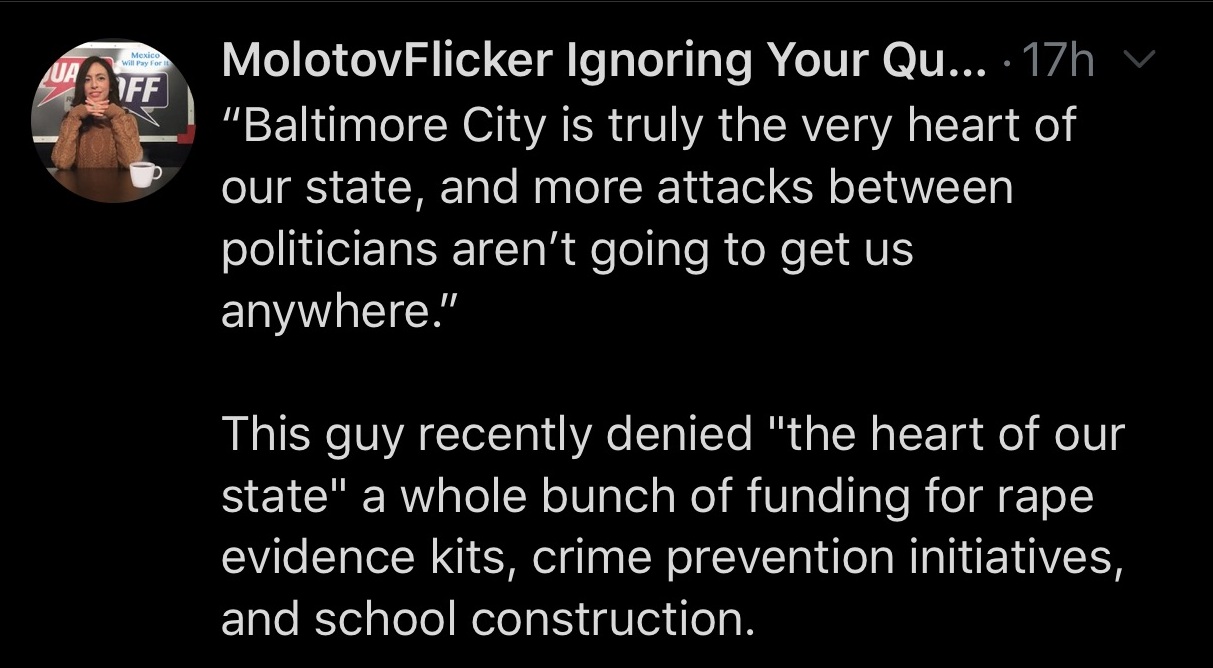 Trump was clearly responding to Cummings’ tough questioning of the head of the Department of Homeland Security last week over the conditions for children held in detention centers at the U.S.-Mexico border.

Children did not have access to a shower or to bathrooms and were left to defecate on themselves, Cummings said, with his stentorian delivery.

Trump on Twitter blasted Cummings for “shouting and screaming at the great men and women of Border Patrol about conditions at the Southern Border when actually his Baltimore district is FAR WORSE and more dangerous.”

The president’s tweets followed closely the narrative of a segment by Fox commenter Kimberly Klacik that focused on trash-filled parts of West Baltimore. Its headline was “How do living conditions in Rep. Cummings’ Baltimore District compare to those on the border?”

“If he spent more time in Baltimore, maybe he could help clean up this very dangerous & filthy place,” Trump tweeted. “No human being would want to live there.”

Rushing to their city’s defense, people posted photos of local beauty spots and prestigious institutions – the brightly painted homes along Auchentoroly Terrace, the Inner Harbor, sunset over Druid Lake, the grand interior of the Peabody Library.

“We all know our city to be home to a collection of unique neighborhoods and world class medical institutions,” Young said during his brief remarks outside City Hall.

The “spirited defense” response struck some as, while understandable, a sign of civic insecurity, the granting of a bully more credence than he deserves.

“It has made me so sad to watch my friends and neighbors defend Baltimore on Twitter today because a vile bigot lied about our home,” attorney Becky Witt tweeted. “I’m glad we all love Baltimore – I love it, too – but it feels like we’re trying to convince bad people that we are worth something.”

Acknowledging the city’s problems with crime and blight, others pointed out how little the Trump Administration has done to alleviate them.

Pro Publica reporter Alec MacGillis noted that thousands of people in the Baltimore area live in apartments owned by Trump’s son-in-law and senior advisor, Jared Kushner, who “fails to maintain them and takes tenants to court to squeeze more money out of them.”

There were plenty of pugnacious zingers that slapped back at Trump:

“Better to have a few rats than to be one,” the Baltimore Sun wrote.

“If this empty-suit, race-hating fraud had to actually visit West Baltimore for five minutes and meet any of the American citizens who endure there, he’d wet himself,” the writer David Simon tweeted.

“See if you have the nerve to say it in person,” the filmmaker John Waters said, addressing Trump.

Trump, of course, has no intention of setting foot in West Baltimore, much less doing anything meaningful to help it.

He threw Charm City’s troubles like a bucket of chum at his base and, as a quick scan of various corners of the Internet and cable TV show, a feeding frenzy ensued.

In Baltimore, regular people – and politicians worth their salt – would do well to stay out of that pool of sludge and concentrate on the hard work needed to make the real change this city deserves.

In that regard, Cummings’ remarks on Saturday night in response to Trump’s attacks are worth repeating:

“Mr. President, I go home to my district daily. Each morning I wake up, and I go and fight for my neighbors. It is my constitutional duty to conduct oversight of the Executive Branch. But it is my moral duty to fight for my constituents.”