A report of a “suspicious vehicle” in a Baltimore parking garage triggered a massive multi-agency emergency response today.

Some of the city’s largest office buildings, hotels and waterfront tourist establishments along Pratt and Lombard streets were evacuated.

Sirens screamed and car horns blared. A fireboat was raced to the Inner Harbor. Hundreds of city, state and federal law enforcement officers swarmed into downtown.

Employees who were evacuated from their high-rise offices stood outside for hours waiting to see if their buildings would reopen.

When they didn’t, the employees had to figure out how they would get home with bus routes canceled and cars trapped in parking garages.

Today’s response was magnitudes beyond that mustered for the average downtown gas leak or fire.

And what was the suspicious vehicle that caused all the commotion, ominously described as a potential bomb or a terrorist weapon containing 1,000 gallons of gasoline?

It turned out to be something relatively harmless – a van rigged with wires, pumps and hoses designed, police said, to enable it to steal diesel fuel.

How much diesel fuel was in it, a reporter asked late this afternoon?

“Not a lot,” said Col. Richard D. Worley, chief of patrol for the Baltimore Police Department, declining to give a specific number. Just 80 gallons of diesel were removed from two containers on the van, the Maryland Department of the Environment later confirmed.

Perhaps there was enough of a fire hazard in the vehicle to justify the dramatic law enforcement response, another reporter wondered.

No, Worley told her, “diesel fuel isn’t easily as ignitable as other fuels.” 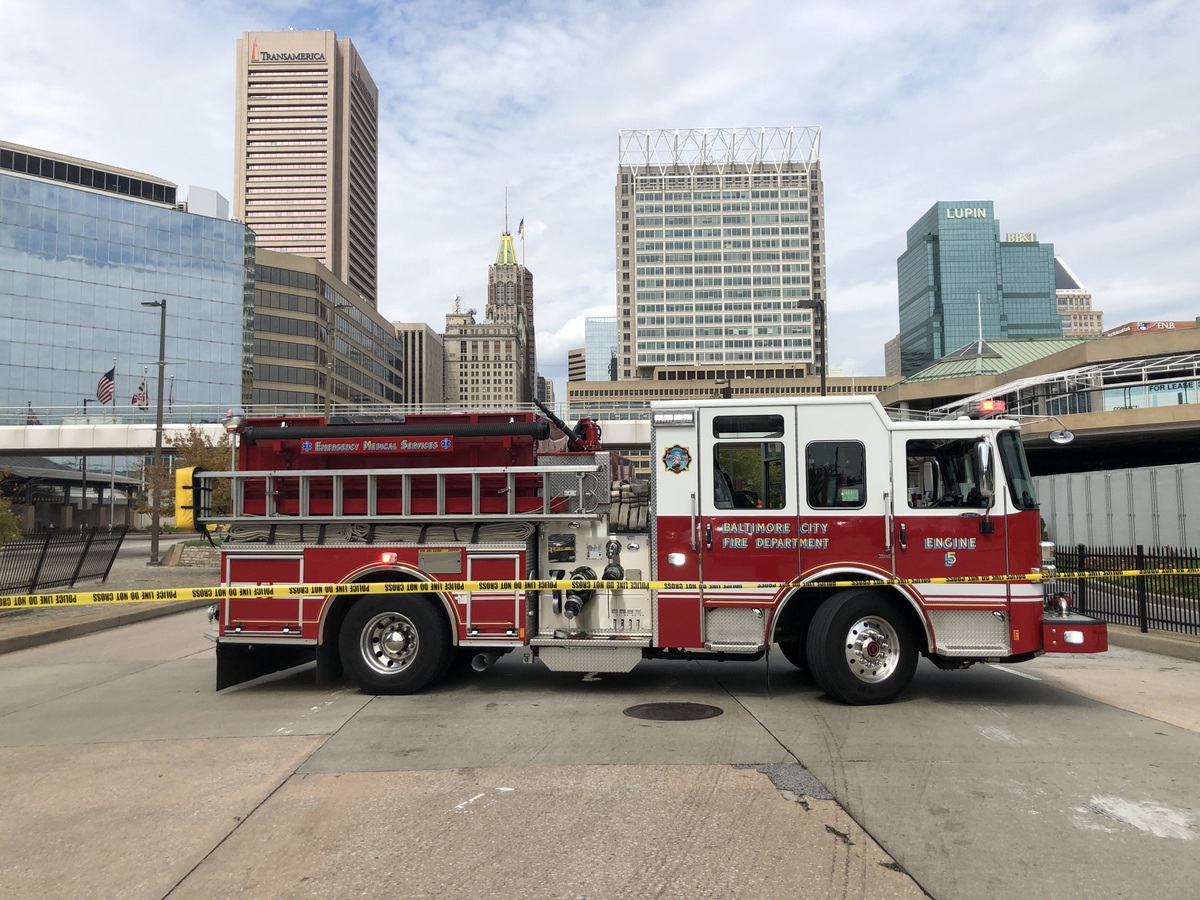 A firetruck blocks off northbound Light Street as police order the evacuation of the three flat-roofed skyscrapers in the background. (Fern Shen)

Law enforcement officers in protective vests, some of whom carried long guns, made it clear to even casual observers that today’s response was magnitudes beyond that mustered for the average downtown gas leak or fire.

Asked the reason for bringing in U.S. Customs and Border Protection agents, Worley said that was part of setting up “a unified command,” which eventually included a raft of city, state and federal agencies, including the Bureau of Alcohol, Tobacco, Firearms and Explosives.

“As you know we have a some very elite visitors coming to the city for the Republican convention at the end of the week, so we have to make sure we do everything according to the Secret Service and Capitol Police,” Worley said.

Asked at another point if the visit by President Donald Trump and GOP leaders on Thursday “has anything to do with the way this incident was investigated,” Worley answered quickly, “No, not at all.” 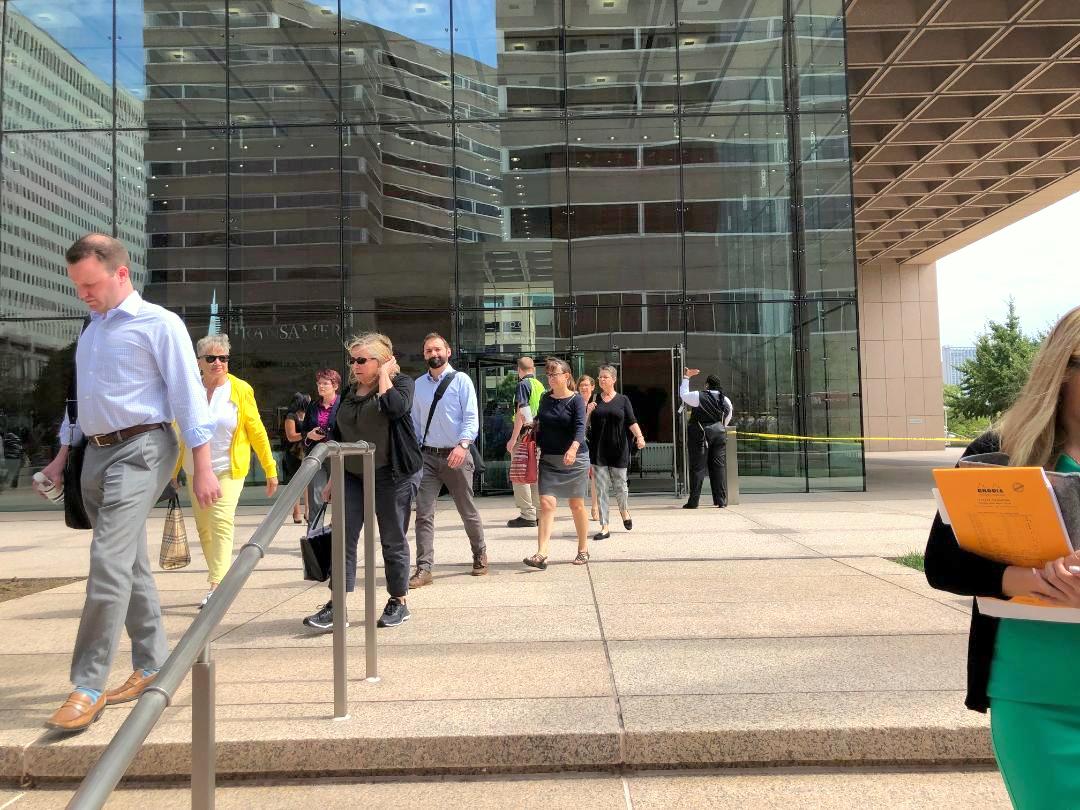 Employees working in the Transamerica building at 100 Light Street are evacuated in the wake of a “suspicious vehicle” found in a garage a block away. (Fern Shen)

Mayor Bernard C. “Jack” Young released several statements on the incident this afternoon, addressing why so many buildings had been evacuated.

At 10:39 a.m., he said, fire officials responded to a report of a “suspicious vehicle” parked in the garage of 100 East Pratt Street.

Initially, a four-block radius was blockaded by police, including 100 East Pratt, 200 East Pratt Street (including The Gallery shopping mall and Renaissance Baltimore Harborplace), and 100 Light Street (the Transamerica building).

Soon, however, evacuation orders spread to other properties, including the Brookshire Suites, Hampton Inn & Suites, and 22 Light Street.

The Pratt and Light Street pavilions of Harborplace were cordoned off by police, leaving clumps of visitors and restaurant workers milling about street corners as police and bomb detection specialists searched other parking garages for suspicious vehicles.

An emergency command center was set up at the intersection of Redwood and Calvert streets to coordinate what Mayor Young later called “precautionary sweeps in an effort to ensure public safety.” 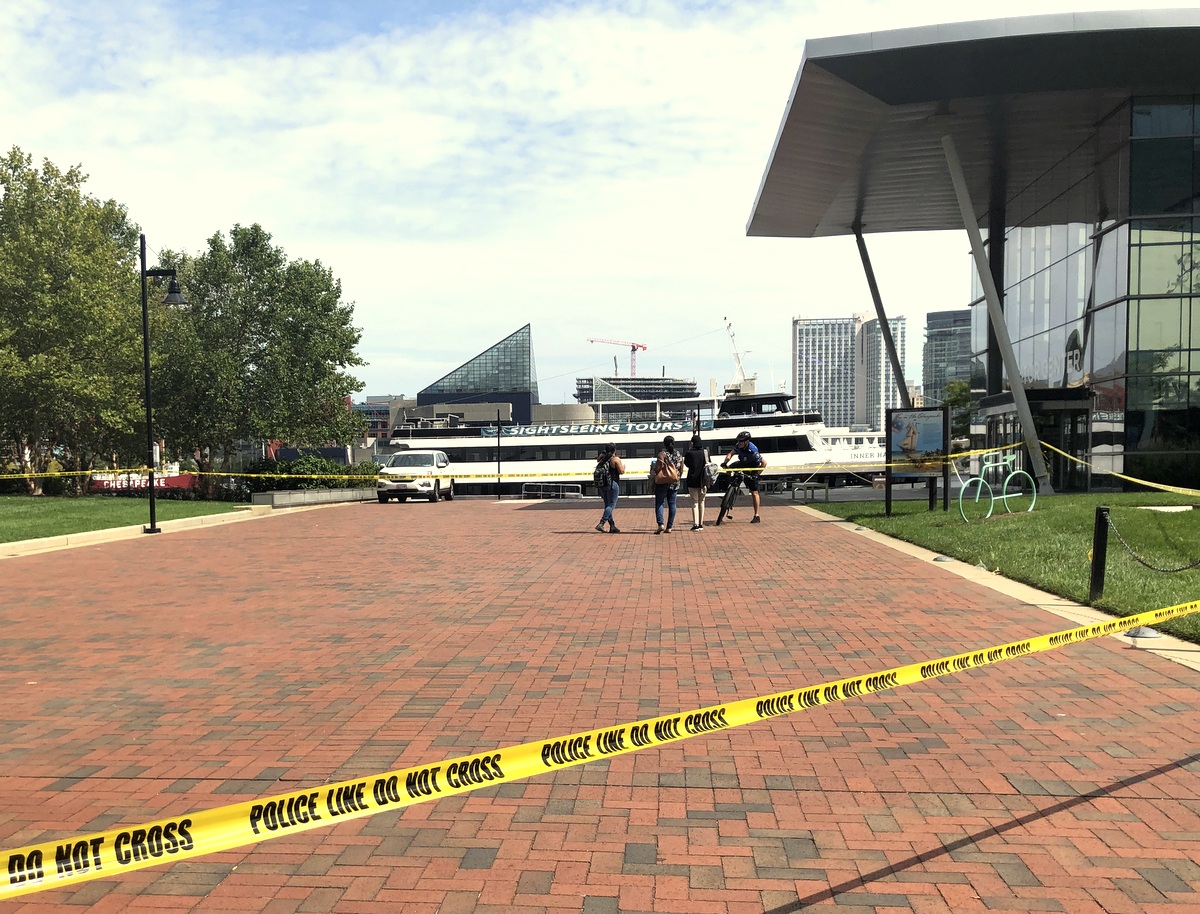 Two blocks south of all of the commotion, a group of people asked a Baltimore officer if they could enter the cordoned-off Inner Harbor area to search for a friend. The answer was no. (Fern Shen)

The extreme scope of the evacuations was striking to some downtown veterans.

“This is really big,” said Gary Marino, one of a flood of people escorted out of the Transamerica building by security guards at about 12:30 p.m. Marino has worked downtown since 2002 and said the 2011 earthquake was the last comparable event.

A woman standing nearby agreed with him.

“My boss at the time said we couldn’t leave because he said the earthquake [tremor] wasn’t going to happen again. At least today they let us get out of the building,” she said.

The duration of the evacuation surprised Derek Moore, whose law firm was among the tenants evacuated from the Transamerica building.

Nearby, two women checked on a third women who they knew had respiratory issues and, like the others, had to walk down many flights of stairs to the street.

“I am okay,” she told them. “I had my inhaler, and I just went down the stairs slow.” 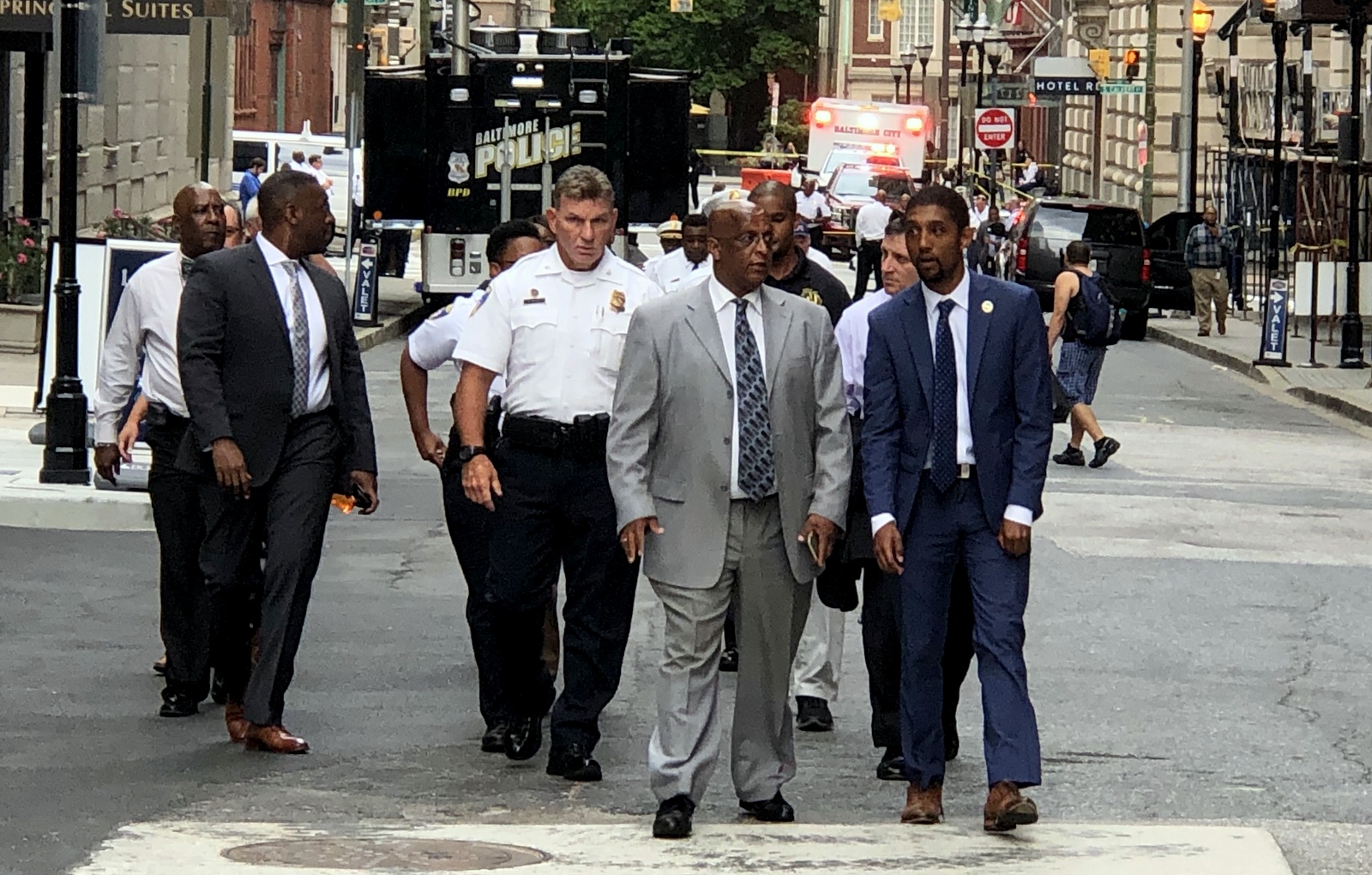 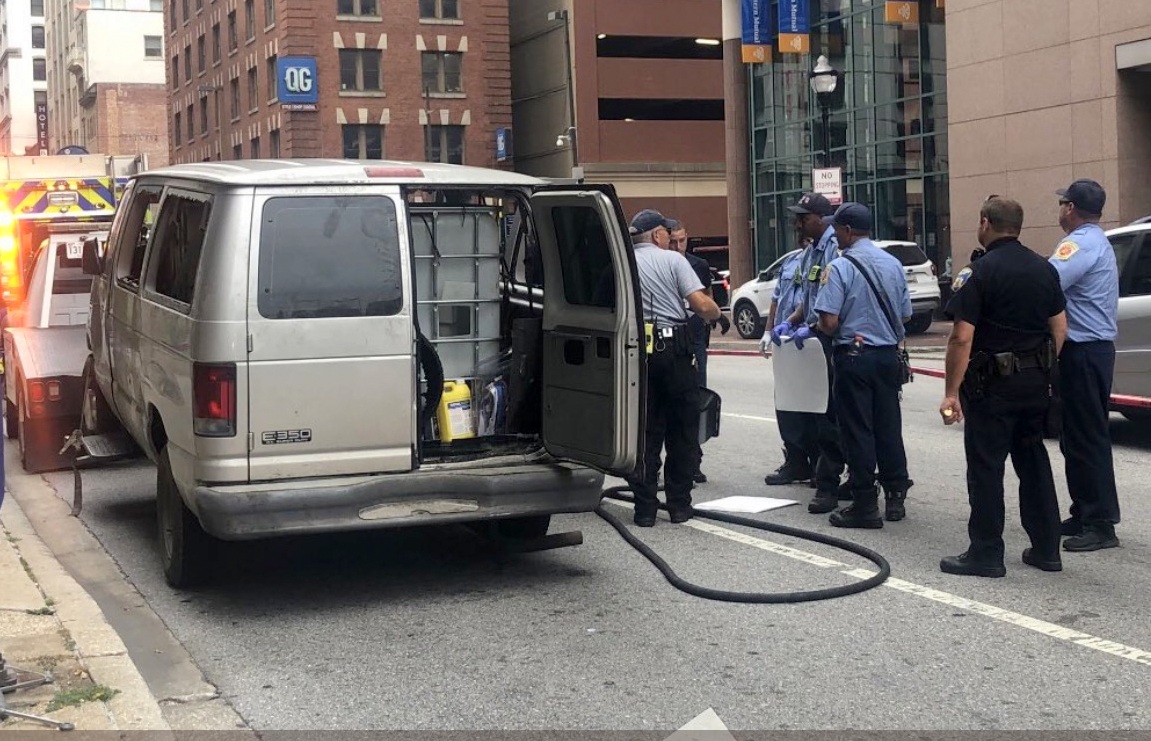