A sewer manhole stack identified two months ago by The Brew as the biggest single source of “unstructured” sewage pollution in the Baltimore area has blown its stack again.

Untreated wastewater was gushing out of the manhole into Herring Run at 1 p.m. today. The manhole is located in the Herring Run streambed about 200 feet west of the Belair Road bridge.

The raised structure is difficult to see from the bridge or from the Herring Run Greenway, which is used by joggers and nature walkers. But the stench of sewage was apparent as one approached the manhole.

The same manhole had released 26.5 million gallons of untreated sewage into Herring Run between December 2018 and August 2019, according to Baltimore’s Department of Public Works.

The city has two main “structured” sewage overflow pipes, SSO No. 67 and No. SSO 72, which release wastewater into the Jones Falls during heavy storms.

In contrast, the overflows at Herring Run are “unstructured” or unplanned – and come despite some $40 million of repairs to the surrounding sewershed.

Today’s overflow appears certain to increase that total by more millions of gallons. (DPW is required by law to disclose overflows above 10,000 gallons.)

During previous “blows,” the force of sewage water inside the 48-inch-wide transmission pipe was enough to toss the manhole lid a dozen feet from the stack. The pipe was built in 1925 to carry sewage from Baltimore County and northeast Baltimore City to the Back River Wastewater Treatment Plant near Dundalk.

When The Brew visited the site today, the manhole lid was raised about an inch above the stack, releasing a torrent of pressurized sewage water, but the lid remained on the pedestal. 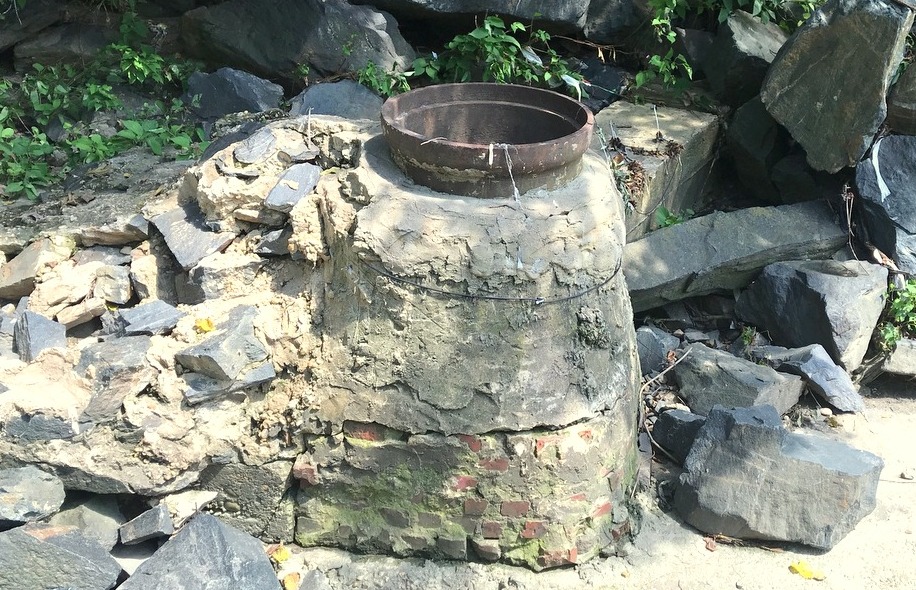 This was the manhole stack on August 26. After The Brew wrote about sewage overflows at this site, DPW reattached the manhole lid and re-sealed the stack. (Mark Reutter)

Under a federal and state consent decree dating back to 2002, Baltimore agreed to eliminate all “SSOs” (sanitary sewer overflows) by 2010.

In recent years, the city has spent about $40 million to improve the Herring Run sewershed.

AM-Liner East, for example, was contracted to replace cracked pipes, fix broken manholes and restore the Herring Run streambed under a $13 million contract with DPW.

Another $23 million project to improve the streambed and sewer line along Chinquapin Run is nearing completion by Spiniello Cos. That project feeds sewage into the Herring Run transmission pipe north of today’s overflow.

Despite the substantial funds expended, DPW acknowledges that sewer overflows along Herring Run are likely to continue until a $430 million “headworks” project is completed to enlarge the size of the Back River plant.

The current date for finishing the headworks – end of 2020. 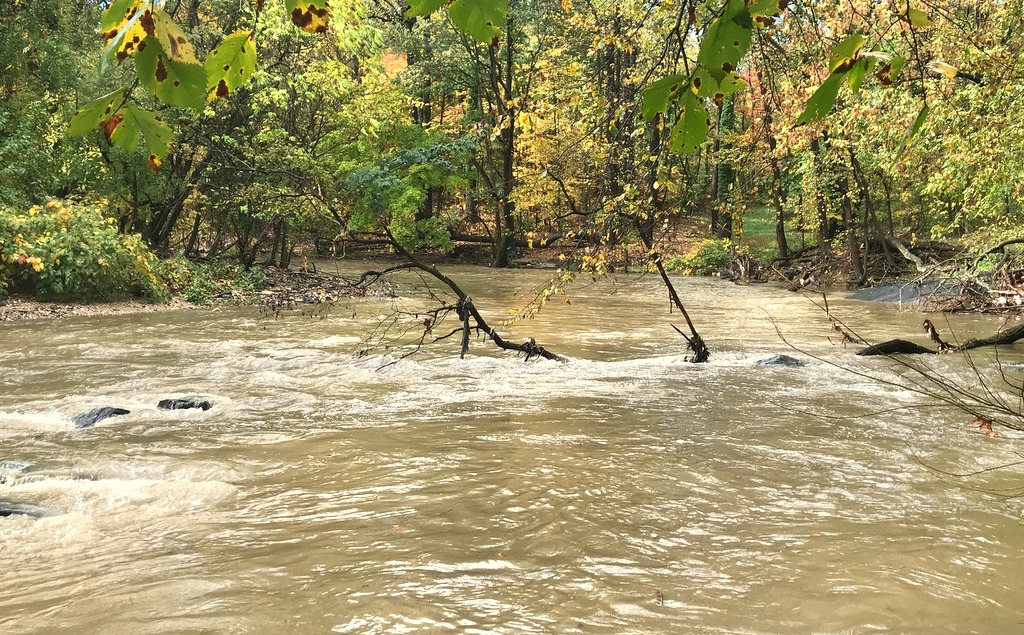 Herring Run was swollen from rainwater today. This photo was taken upstream from the overflowing manhole stack. (Mark Reutter)