In possibly the largest settlement of its kind in Baltimore, the city will pay $8 million to a cadet who was accidentally shot in the head by a police officer during a 2013 training exercise.

Raymond Gray, a University of Maryland police recruit, was left with severe brain damage and other serious injuries, including the loss of an eye.

The payout, approved yesterday by Mayor Bernard C. “Jack” Young and the Board of Estimates, is striking given the payments the city has made in other cases of dire or deadly mistakes and misconduct by Baltimore officers.

One obvious comparison is the $6.4 million paid to the family of Freddie Gray, a 25-year-old man whose 2015 encounter with the BPD ended in his death.

But that settlement was a notable outlier. It exceeded the combined total of more than 120 other lawsuits brought against city police for brutality or misconduct between 2011 and 2015, according to The Baltimore Sun.

Between fiscal 2016 and 2019, the city paid a total of $5.3 million to claimants of police brutality – or 65% of yesterday’s single settlement – with another $7 million paid, mostly to outside counsel, to represent police officers in the cases.

The cost of police settlements for FY 2015-19, broken down by payments to claimants and payments to legal counsel to represent the police officers involved. (Baltimore Bureau of the Budget)

Multi-million dollar settlements were reached in two suits against Baltimore police in 2017 and 2018, both involving cases where the men were wrongly convicted and imprisoned for over two decades.

A typical case of police misconduct was settled by the BOE last week. This involved the claim of Michael Johansen, who was shot intentionally in the groin by police officer Wesley Cagle.

Dropping to the ground after officers fired shots that had slightly grazed him, Johansen looked up “declaring that he was unarmed,” according to board documents.

Shot in the groin, Johansen suffered serious injuries, including the loss of portions of his intestines and kidney. He settled with the city for $40,000.

Johansen testified at Cagle’s criminal trial that the officer stood over as he lay on his back and called him “a piece of s___” before shooting him.

What the city paid to Johansen, whose injuries were serious, including the loss of portions of his intestines and kidney, to settle the case?

“Must do what’s right”

“As we all know, government agencies must follow laws, policies and procedures and there are also times when government must do what’s right – this is one of those times,” Pratt said, reading from a prepared statement.

Gray had been in an Owings Mills building as part of a session in which a police department training officer, William Kern, aimed his service weapon at a window in Gray’s direction and fired. Kern said he believed the gun was a non-lethal simulation weapon. 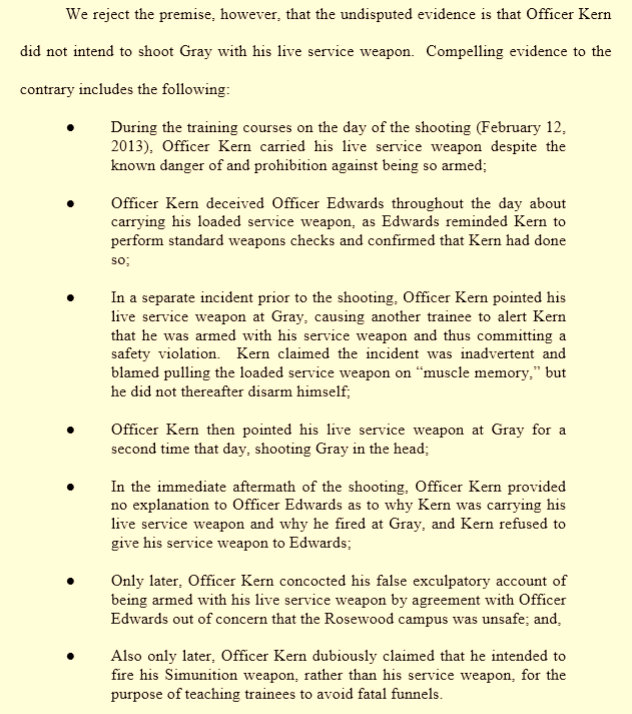 The bullet that lodged in Gray’s brain caused injuries that would require lifetime care, according to a suit filed on his behalf by noted attorney A. Dwight Pettit.

“Mr. Gray’s injuries occurred in a place where he felt he was safe and where he should have been safe while he was being trained to protect other people’s lives,” Pratt said, calling the settlement “significant and entirely appropriate.”

Case was Fought for Years

That’s a stark change from the initial stance that city officials took on Gray’s claim, opposing it in court for six years by arguing that his lawsuit was subject to a $200,000 state cap.

Asked yesterday why the law department had changed its position so dramatically, Deputy City Solicitor Dana Moore pointed to the city’s 2017 loss on appeal.

That decision “really opened our eyes to the need to do something different, and it was Mayor Young who gave us the mandate,” Moore said at the mayor’s weekly press availability.

Baltimore’s current city solicitor, Andre M. Davis, was a Fourth Circuit Appeals Court judge when the Gray case was heard by a three-member panel of his fellow judges.

Having retiring from the court later that year to become Baltimore’s city solicitor, Davis recused himself from yesterday’s BOE settlement vote.