Governor Larry Hogan is expected to interview and soon decide whether to appoint or reject nominations for a new state prosecutor to replace retiring Emmet C. Davitt.

Who the governor selects will have far-reaching implications for accountability and clean government in Maryland.

The Office of the State Prosecutor is charged with a special mission: Ferreting out misconduct and corruption by elected officials and public employees, including bribery, extortion and misconduct in office, together with election law and ethics law violations.

Despite limited resources – a staff of seven investigators, three prosecutors and a budget of under $2 million – the office has notched up several notable victories under Davitt.

They include the conviction of former Baltimore County schools superintendent Dallas Dance (for failing to disclose income from a company that did business with the school system) and the jailing of ex-Anne Arundel County Executive John R. Leopold (on two counts of misconduct in office).

The office won a guilty plea from Gary Brown Jr., an aide to former Mayor Catherine Pugh, for election law violations, and fined a political slate funded by James T. Smith Jr., the former Baltimore County executive, that made an improper $100,000 loan to the Pugh campaign.

Last April, Hogan asked the prosecutor to undertake a criminal investigation of Pugh’s financial dealings with the University of Maryland Medical System (UMMS).

That probe is now reportedly part of a larger investigation into Pugh by the U.S. attorney’s office.

Why So Few Names?

What has raised concerns is that despite a record number of applicants for Davitt’s job, only two names were submitted last month to the governor.

Charlton T. Howard III and Michael J. Dunty do have many years of legal experience under their belt. But, critically, not in the specialized world of white-collar financial crime that OSP is charged with prosecuting, according to a review of their resumes and past work history.

James Cabezas, chief investigator for the OSP for 38 years (he retired in 2017), is well versed in how state prosecutors, such as Davitt, Robert A. Rohrbaugh and Stephen Montanarelli, were hired in the past. This year’s process caught him by surprise.

“I find it unusual that they [the selection commission] submitted just two names to the governor when in the past, when a new appointment was being made, it was always three to five nominees. That was the rule,” he said.

Of the 12 candidates who went through the selection process (six applicants voluntarily withdrew or failed to file the required forms), four were women with “excellent credentials,” she said.

One of the women was a former deputy at Prince George’s County State’s Attorney’s Office. Another was a veteran homicide team leader originally from Baltimore City. A third, Kelly B. Madigan, who is currently the interim state prosecutor, was recommended for the job by Davitt.

“Yes, I recommended Kelly Madigan very highly,” Davitt emailed The Brew, saying he did not feel it otherwise appropriate to comment on the selection process.

“Yes, I recommended Kelly Madigan very highly,” Davitt says of the current acting state prosecutor, whose name did not make the selection cut.

None was nominated. Instead, the State Prosecutor Selection & Disabilities Commission selected Howard and Dunty.

A summary of the responsibilities charged to the OSP.

“I’ve never heard of Howard,” said Cabezas. “Does he even live in the state?”

For most of his career, “Chuck” Howard worked in Virginia. Except for two brief stints separated by 24 years at the Baltimore state’s attorney’s office, he has little prosecutorial experience, according to his online resume.

A graduate of the U.S. Naval Academy and University of Maryland Law School, Howard spent more than two decades as a counterintelligence officer and the executive assistant director at the Naval Criminal Investigative Service in Quantico, Va.

He describes his expertise as “acquiring, analyzing and disseminating criminal, counterintelligence and terrorism threat information to safeguard Navy and Marine Corps personnel and assets.”

Since 2015, Howard has worked for Brian E. Frosh, Maryland attorney general, as a special counsel “establishing and enforcing child support orders in the Maryland courts.”

He drew heavy criticism from defense lawyers in 2014 for his prosecution of a “road rage” case with racial overtones. (His conduct was defended by then-boss Anne Colt Leitess.)

In 2015, Dunty was among several Anne Arundel prosecutors fired by incoming state’s attorney Wes Adams. He worked for less than a year at OSP before he was hired by Marilyn Mosby as an assistant state’s attorney in Baltimore.

“I say this with all due respect, he was no heavyweight in my view,” says Jim Cabezas of candidate Michael Dunty.

“I know Mike. I say this with all due respect, he was no heavyweight in my view,” Cabezas said of Dunty’s tenure in the state prosecutor’s office.

“I didn’t see that he had any particular background experience that would now qualify him as state prosecutor.” 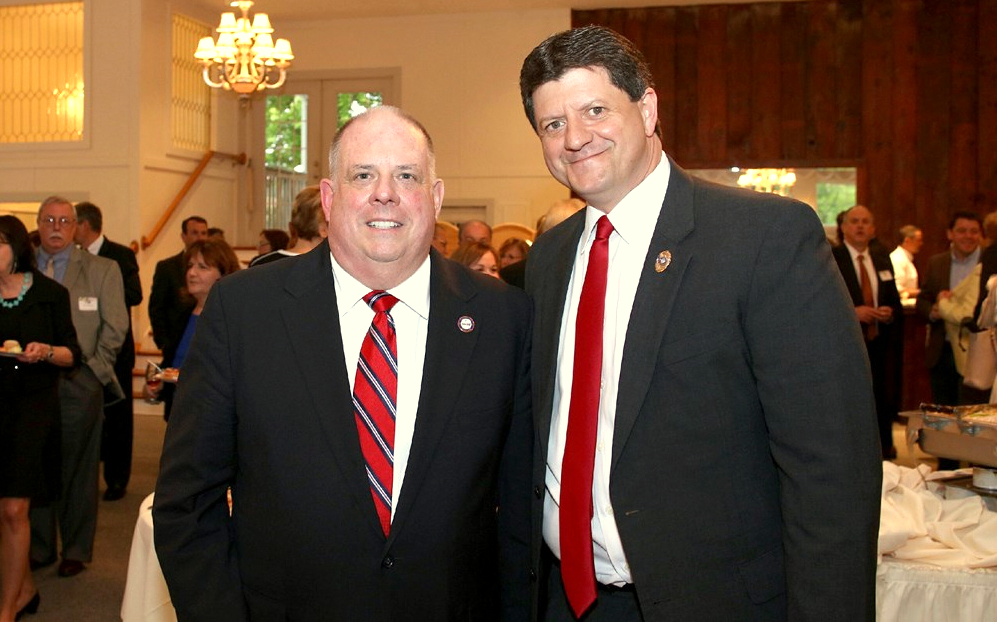 Larry Hogan and Brian DeLeonardo meet at a fundraiser a few months before they won their current elected jobs – as governor and as Carroll County state’s attorney – in the 2014 general election. (votedeleonardo.com)

Who Selected The Nominees

He was reported “out of the office” when The Brew tried to reach him. An aide said he would be given a message about our request to interview him about the selection process. So far, he has not responded.

The selection commission is a repository of former elected officials – or members of the very group the state prosecutor is supposed to probe.

DeLeonardo was appointed chair by Hogan earlier this year. A Republican, DeLeonardo was first elected as Carroll County’s state’s attorney in 2014, the same year that Hogan won the governorship. Hogan campaigned for DeLeonardo.

Outside of DeLeonardo, the commission is mostly a repository of former elected state officials – or members of the very group the prosecutor’s office was set up to probe.

The office was established by the General Assembly in 1976 and began operations in 1977, the same year that Maryland was the subject of national headlines when Gov. Marvin Mandel was convicted in federal court of racketeering and mail fraud.

The other six commission members are:

The commission met four times in September and early October to go over the selection process and to interview candidates.

The majority of the meetings, including candidate interviews, were held in closed sessions, but some public information was reflected in meeting minutes reviewed by The Brew.

The commission, for example, agreed that Attorney General Frosh would not have to recuse himself from consideration of the three candidates (Howard, Kodeck and Adam Sampson) who worked in his office.

The minutes for the September 17 meeting say this:

“Member Frosh asked that prior to the motion to close the meeting, that he noted that three applicants had worked in the Office of Attorney General, and that he confirmed with ethics that he would not need to recuse himself; he would have valuable information about their work history.”

Prior to going into closed session, the panel appeared also to follow Frosh’s suggestion that “management experience, investigative experience, prosecution experience and appellate experience” were the four key criteria for evaluating and interviewing the applicants.

There was no public discussion about how many candidates would be submitted to Hogan – or why the number wound up being just two. The minutes did note that the nominees were to be selected by secret ballot.

With the names of Howard and Dunty submitted to the governor, Hogan is expected to interview each candidate. He may appoint one of them or reject them and require the commission to nominate other candidates.

The prosecutor is appointed to a six-year term. The current annual salary is $160,000.