It was a bit surreal yesterday in Harlem Park.

The ACLU of Maryland had just assembled the media to announce a federal lawsuit alleging constitutional violations when Baltimore police closed down a multi-block area following the fatal shooting of Detective Sean Suiter in a vacant lot.

Meanwhile, at the very lot where Suiter had died in 2017, two men were struggling over a black handgun.

It turned out that the men, working on a documentary about Suiter’s shooting, were doing a reenactment. This according to one of the half-dozen people wielding cameras and microphones who waved a reporter off the lot. 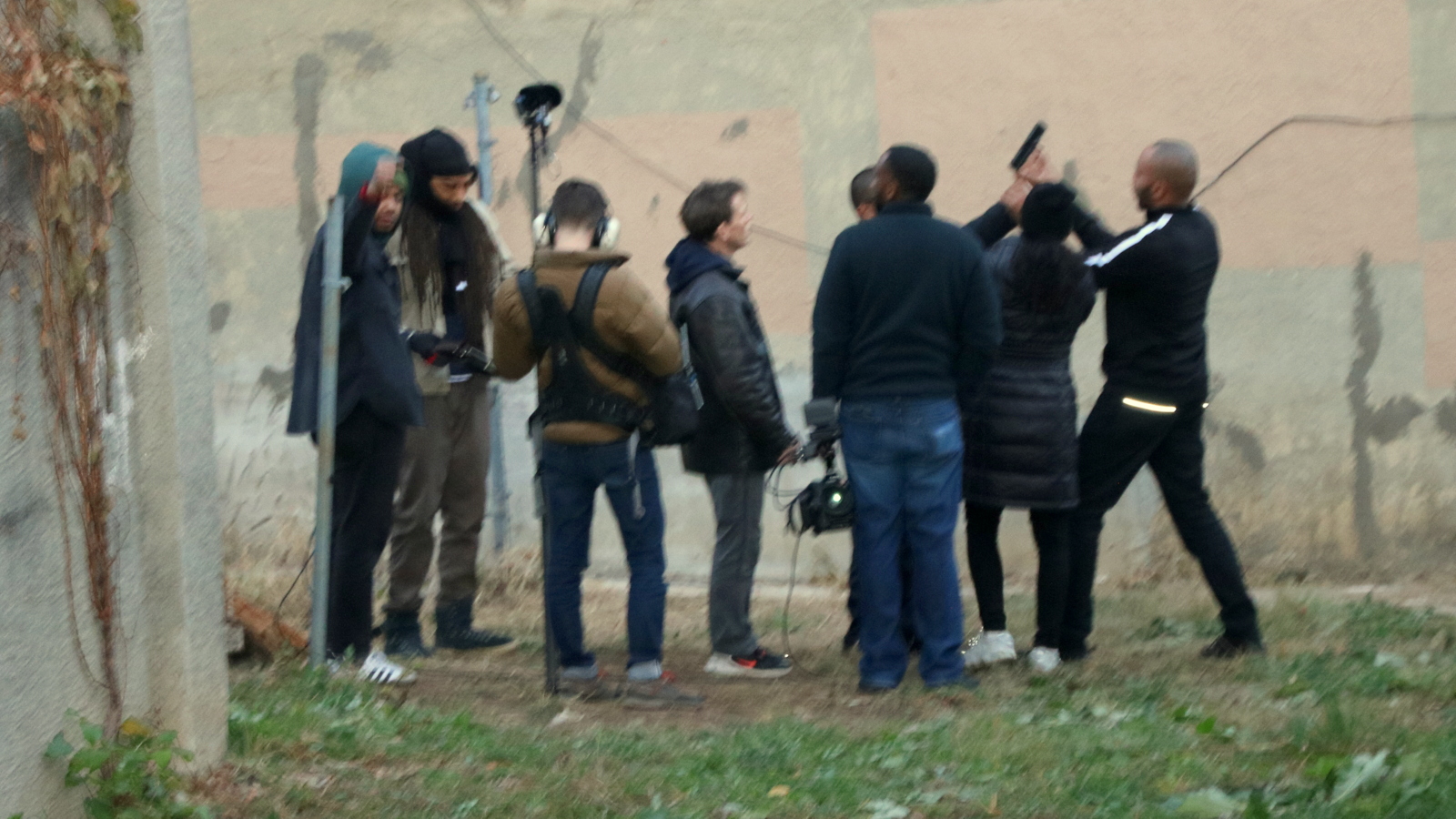 A film crew at work yesterday on a documentary about the mysterious death of Sean Suiter. (Fern Shen)

Near the staged gunplay, ACLU lawyers were describing a “flagrantly illegal” lockdown of the neighborhood two years ago, calling the police department’s treatment of the mostly African-American neighborhood discriminatory.

“We all know. . . this wouldn’t have happened in Roland Park, a predominantly white neighborhood in Baltimore,” said ACLU executive director Dana Vickers-Shelley, introducing two of the named plaintiffs in the suit.

For nearly two hours, she said that she and her daughter had wait in the cold before police allowed them to enter their home.

Why, a reporter asked the ACLU senior staff attorney David Rocah, did the BPD do this?

“One inescapable answer to that,” Rocah replied, “is because there was a death of a police officer.”

Then he added another explanation: “Because they thought they could get away with it.”

It may be one of the enduring ironies of the Suiter case that more is known about the aftermath of the shooting than perhaps will ever be known about what really happened to the 43-year-old detective that day.

He was found with a bullet wound to the back of his head from his own service weapon a day before he was scheduled to testify before a grand jury looking into the corrupt Gun Trace Task Force.

Why did the BPD do this? ACLU: “because there was a death of a police officer.

Despite a massive police operation involving armored vehicles and a mobile command unit in addition to the six-day lockdown, no one was ever arrested in the case.

Initially ruled a homicide by the State Medical Examiner, Suiter’s death was eventually explained as suicide by an independent board convened to review the case.

Earlier this month, Baltimore Police Commissioner Michael Harrison, citing a review of the case he had requested by the Maryland State Police, declared the investigation closed and Suiter’s death a suicide.

The following day, State’s Attorney Marilyn Mosby and the police union contradicted him, saying the case was still open and under investigation. Harrison then walked back his earlier statement, saying he “misspoke.”

Suiter’s family, meanwhile, continues to reject the suicide conclusion, saying they believe his death was “an inside job” and the suicide story “a cover-up.”

While the cause of the detective’s death remains controversial and unclear to many, the alleged events that followed it are laid out in detail in the ACLU complaint.

In addition to Bullock, the plaintiffs include Lauren Holmes, Nicole Lee and Luella Lawson. The defendants are the BPD, Mayor and City Council and Kevin Davis, the police commissioner at the time.  Representing the plaintiffs in addition to the ACLU is the DC. law firm Crowell & Moring LLP

Officers stopped people “without reasonable, articulable suspicion that they had committed, were committing, or were about to commit a crime,” the lawsuit states. 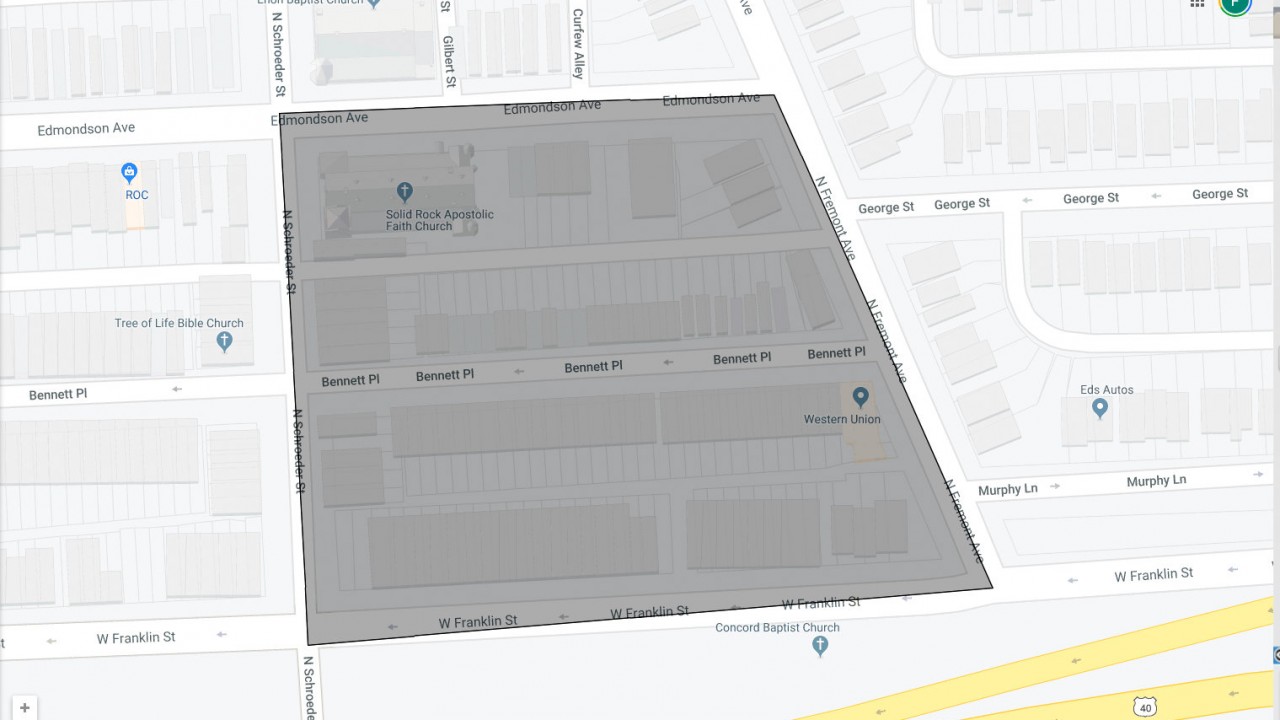 The lockdown included 100 houses, a church and two stores. (aclu-md.org)

That, Rocah said, was when the 4th Amendment right “to walk around freely without police interference . . . went right out the window.”

According to the complaint:

Residents were told to carry identification with them at all times, and to show identification at checkpoints, and often at their front doors. They couldn’t leave their homes without being accosted by police officers at their doorstep or at the nearest checkpoint to be identified; have family or friends come over without police questioning and permission; come home from work without reporting to a police officer; bring their children to school without being stopped and questioned by police in front of their children; or step outside for any reason without being under surveillance and possibly recorded.

“I don’t think this is something that should take place just because you live in a certain neighborhood,” she said. 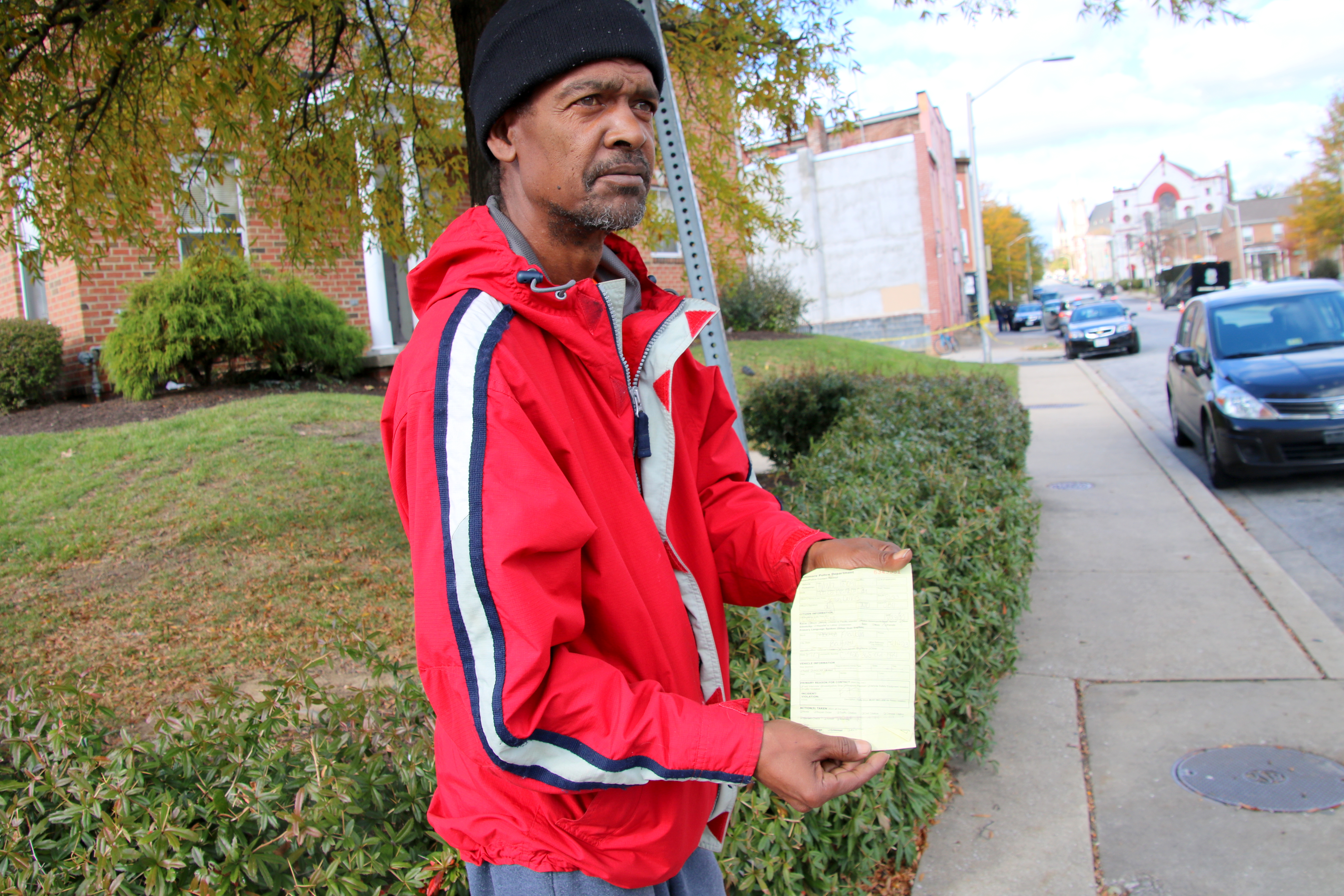 Edward Stanley holds one of the yellow pieces of paper that residents were required to show to police during the Harlem Park lockdown. (Fern Shen, 2017)

Holmes’ experience, one of several detailed in the suit, includes being almost barred from getting into her own home at one point because her driver’s license did not have her current address.

“Fortunately, she found a few bills that listed her name and [Harlem Park] address in her car,” the suit states.

Police officers copied down the information on a “Citizen/Police Contact Receipt” form, gave her the yellow copy.

At another point, the suit says, Holmes was unable to take her children to school or go to work “because BPD officers told them to go inside when they attempted to leave their home to get to her car.”

“She tried to leave several times that morning but each time BPD officers in front of her home would not allow her to leave,” the suit says.

[The ACLU, as part of the litigation effort, released a digital timeline of the lockdown, with photos, quotes from residents and snippets from the social media reaction to the the police action as it was happening. ]

The police response went beyond what was necessary to investigate the shooting, Rocah said, calling the lockdown “a police state, not a crime scene.”

The lawsuit asks for compensation from the city as well as “a prohibition against BPD ever establishing a similar neighborhood lockdown again.” It further seeks a court order requiring the police to destroy “all personal information illegally obtained from residents.”