The City Council yesterday passed legislation that seeks to address the black eye that elected officials suffered from the conviction of former mayor Catherine Pugh. Scaled back and enforcement dependent, it may wind up as something that simply powders the bruise over.

The bill can best be described as the “Healthy Holly Loophole Closing Amendment” in that it requires businesses owned by an elected official (or their spouse) to publicly disclose customers who spent $1,000 or more a year – if those customers are a lobbyist or are regulated by or do business with the city.

Bill sponsor Ryan Dorsey read to the Council an excerpt of a Brew article about a $100,000 payment that businessman J.P. Grant gave to Pugh in the name of helping her distribute Healthy Holly books, then said:

“We are familiar with this elaborate and somewhat absurd scheme revolving around the thin veil of legitimacy created by book sales.”

Dorsey called the bill “groundbreaking” and said it “set a new precedent on the state level.”

However, a careful reading of 19-0457, including some last-minute amendments, reveals less a sudden lunge toward cleaner government than a small first step toward more disclosure.

The amendments raised the disclosure threshold from $20 to $1,000 and limited the scope of the bill by identifying only certain kinds of businesses to be covered. It relies for enforcement on the city Ethics Board’s oversight, which City Council President Brandon Scott has called “entirely inadequate.”

Attempts to reach Dorsey about the bill’s contents were unsuccessful. He discussed the amendments in a Facebook post.

“In certain moments, it felt like what I wanted was being whittled away,” he wrote. “In the end, though, I think what we have is the bill we needed.”

As city law now stands, the mayor, comptroller, City Council president and the 14 elected members of the Council are required to report the names of businesses they own on their annual ethics form.

What they don’t have to report is any business that their businesses might do with companies doing business with the city.

If that sounds confusing, consider this concrete example:

Pugh did report on her city ethics form that she was the sole owner of Healthy Holly LLC. But she didn’t report that Healthy Holly was getting money – lots of money – from an array of businesses doing business with the city.

If the Dorsey bill had been in effect, Pugh would have been required to disclose the names of entities that spent more than $1,000 on Healthy Holly books.

However, she would not have had to disclose how much the entities spent. In the case of Grant Capital Management, that spending amounted to $150,000 in 2016, the year Pugh was elected and began serving as Baltimore’s mayor.

Looking forward, how far would the new legislation, if signed into law by Mayor Bernard C. “Jack” Young, reach into the affairs of current officeholders?

Most elected officials say on their ethics forms that they work full-time for the city and only the city. As a result, the bill’s requirements would likely impact only four officials at present – Joan M. Pratt, Isaac “Yitzy” Schleifer, Danielle McCray and Mary Pat Clarke.

(There may be another official or two that would have to disclose based on the business interests of their spouses.)

Pratt has been city comptroller for 25 years, elected to six consecutive terms in office. During the same period, she has run her own accounting firm in northeast Baltimore, Joan M. Pratt, CPA & Associates.

As a member of the Board of Estimates, Pratt routinely abstains from voting on contracts awarded to a number of nonprofits and churches as well as to private businesses that she has done accounting work for.

She has also been a partner in “2 Chic Boutique,” a designer clothes consignment store majority-owned by former mayor Pugh.

(Pratt’s reported 22% share of the business is below the 30% threshold that would trigger the disclosure of customers in the Dorsey bill. What’s more, the boutique shut its doors earlier this year, not long before the Healthy Holly scandal broke.)

The Brew asked Pratt how her accounting business might be impacted by the Dorsey bill, and whether she was concerned about having to potentially reveal the names of her clients. She has not yet replied. 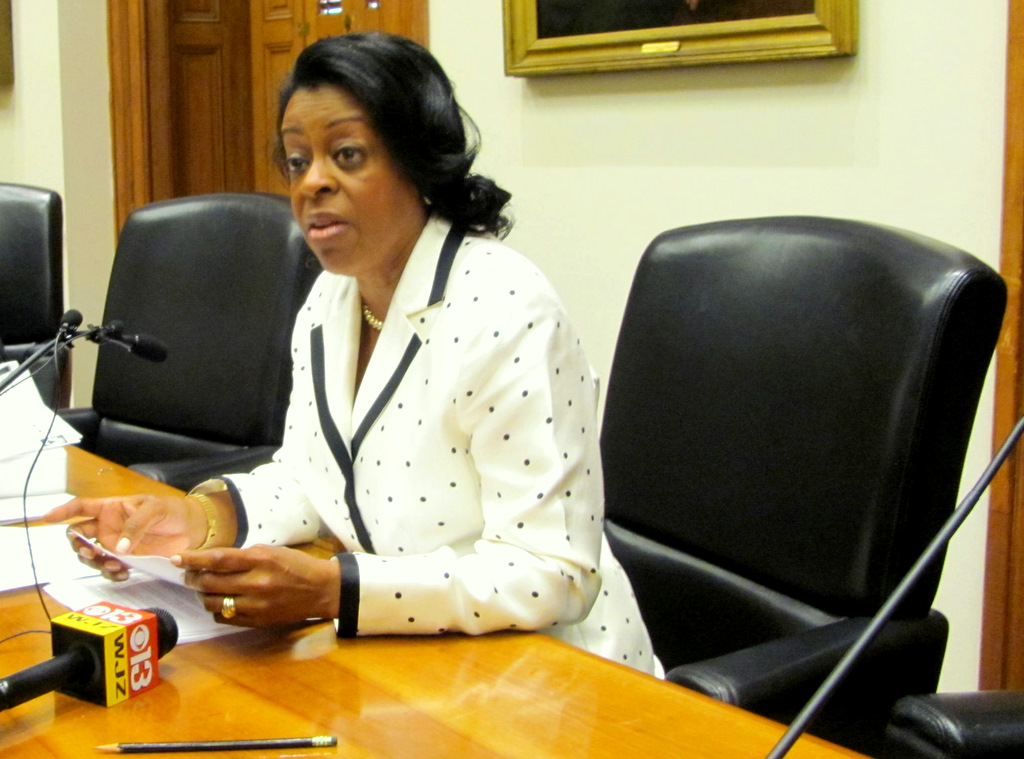 Joan Pratt speaks to the media from her seat on the Board of Estimates in 2013. (Mark Reutter)

Councilman Schleifer, who entered elective office in 2016 representing northwest Baltimore, has two businesses that might be required to disclose its customers, according to his prior ethics filings.

They are Raffle Ready LLC, which raises money online for nonprofits, and Shliffness LLC, which provides software marketing services.

Schleifer, who last night voted in favor of the Dorsey bill, did not respond to questions about his businesses.

The company is currently listed as not-in-good standing with the Maryland Department of Assessments and Taxation. It is unclear if the seemingly dormant company would meet the $1,000 disclosure threshold.

Clarke: “I do benefit”

At yesterday’s meeting, Councilwoman Clarke announced, “I just happen to be described” in the provisions of the Dorsey bill.

She explained, “I benefit from my percentage ownership of a business my husband has 80% of, and when he goes to the grocery store, he’s spending money from that business. And I’m eating a lot lately, so it may be more than 20%.”

In her current ethics report, Clarke fully discloses her interest in a Charles Village apartment building that she co-owns with her husband.

The veteran politician will not seek reelection when her term ends next December, releasing herself from future business disclosures.

She abstained from voting on the Dorsey bill not from any opposition to the bill, but because it posed a conflict of interest.

In fact, she told her colleagues, “I admire the bill.”