Inside the North Baltimore home that hosted a private fundraiser for Pete Buttigieg last night, the South Bend mayor was name-checking Lizzo, getting a Lamar Jackson jersey from the host and answering earnest questions like:

How would he help Baltimore if he became president of the United States?

How would he get U. S. soldiers out of Afghanistan? Or bring down the national deficit? And where’s Chasten?

Meanwhile outside, protesters were chanting “Wall Street Pete, go home!” And on Twitter – where the above Brew photo showing the predominantly white crowd was circulating – the event was being mocked mercilessly as reflective of a candidate out of touch with black voters.

“Peter managed to attend an event in Baltimore & not bump into any Black people,” marveled @Shugah. “That’s a Christmas miracle.”

“The Black people were in the bathroom, I assume,” one said, while another observed that the crowd, gathered in this majority-black city, resembled the party guests from “Get Out.” 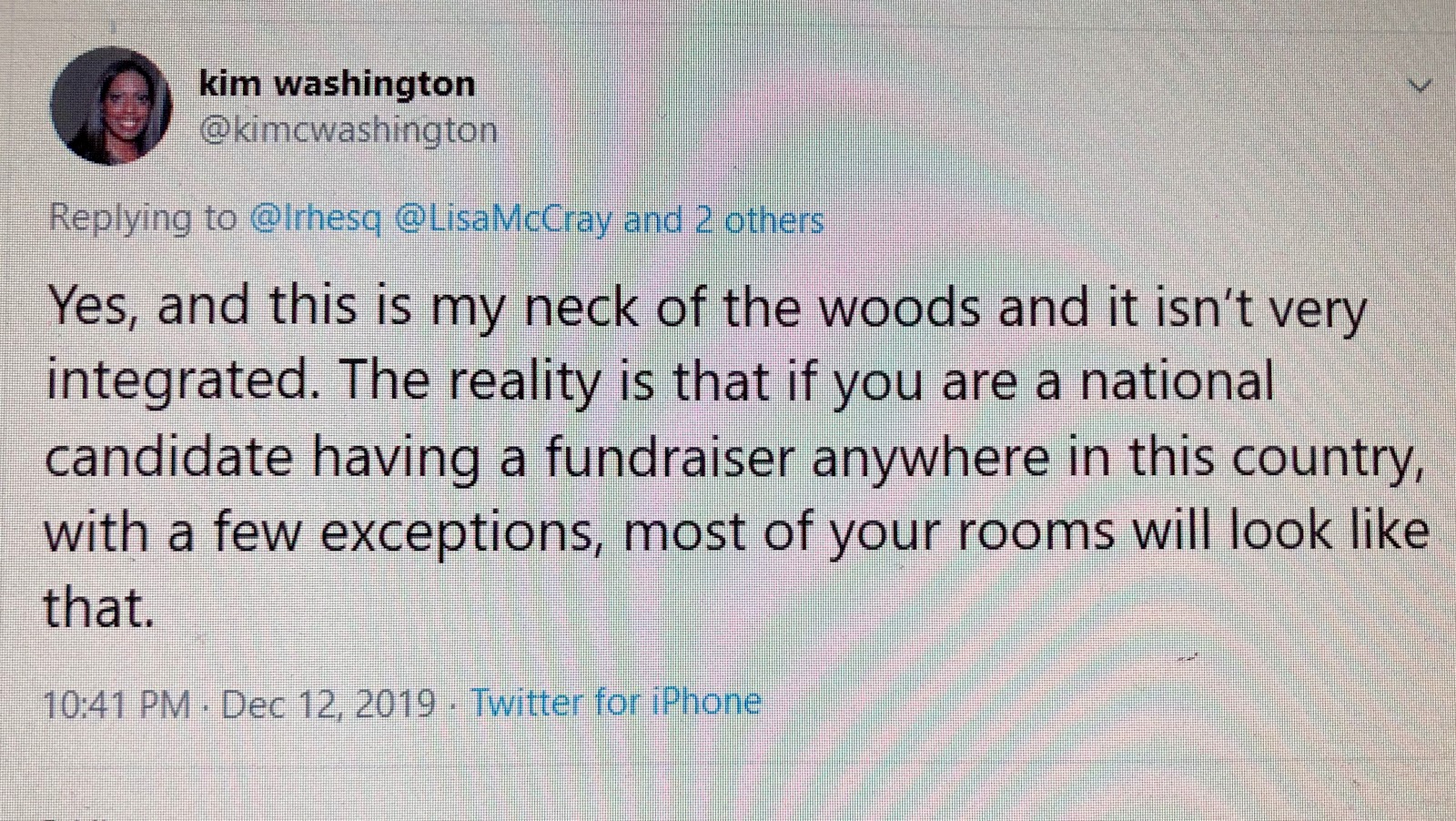 Addressing an audience that did include some black people – among them, mayoral candidates state Sen. Mary Washington and City Council President Brandon Scott – Buttigieg answered the Baltimore question in part this way:

“I think we need somebody with a mayor’s eye view in the White House,” he said. “We need Washington running with a little bit more attention to what is needed on the ground in our cities and towns of any size. When you’re a mayor you have that mentality of figuring out how to deliver. . . And that’s the mentality I will bring into the White House.” 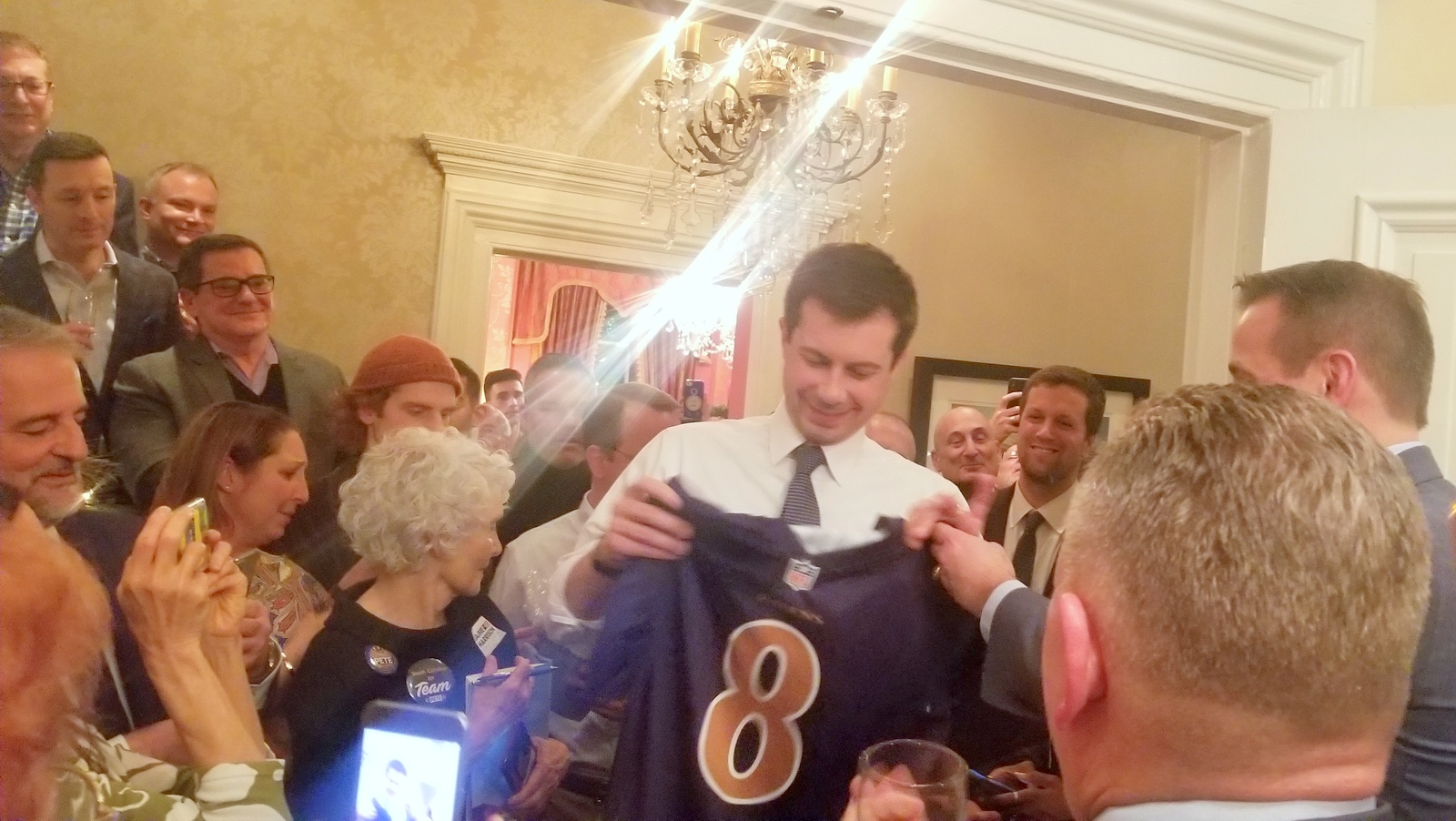 Buttigieg spoke for about half an hour to approximately 140 people at the home of Neal Naff and Nathan Hubler.

For non-political star-power, the event had Jeremiah Lloyd Harmon, the red-headed singer from Catonsville who placed sixth in the 17th season of “American Idol.” 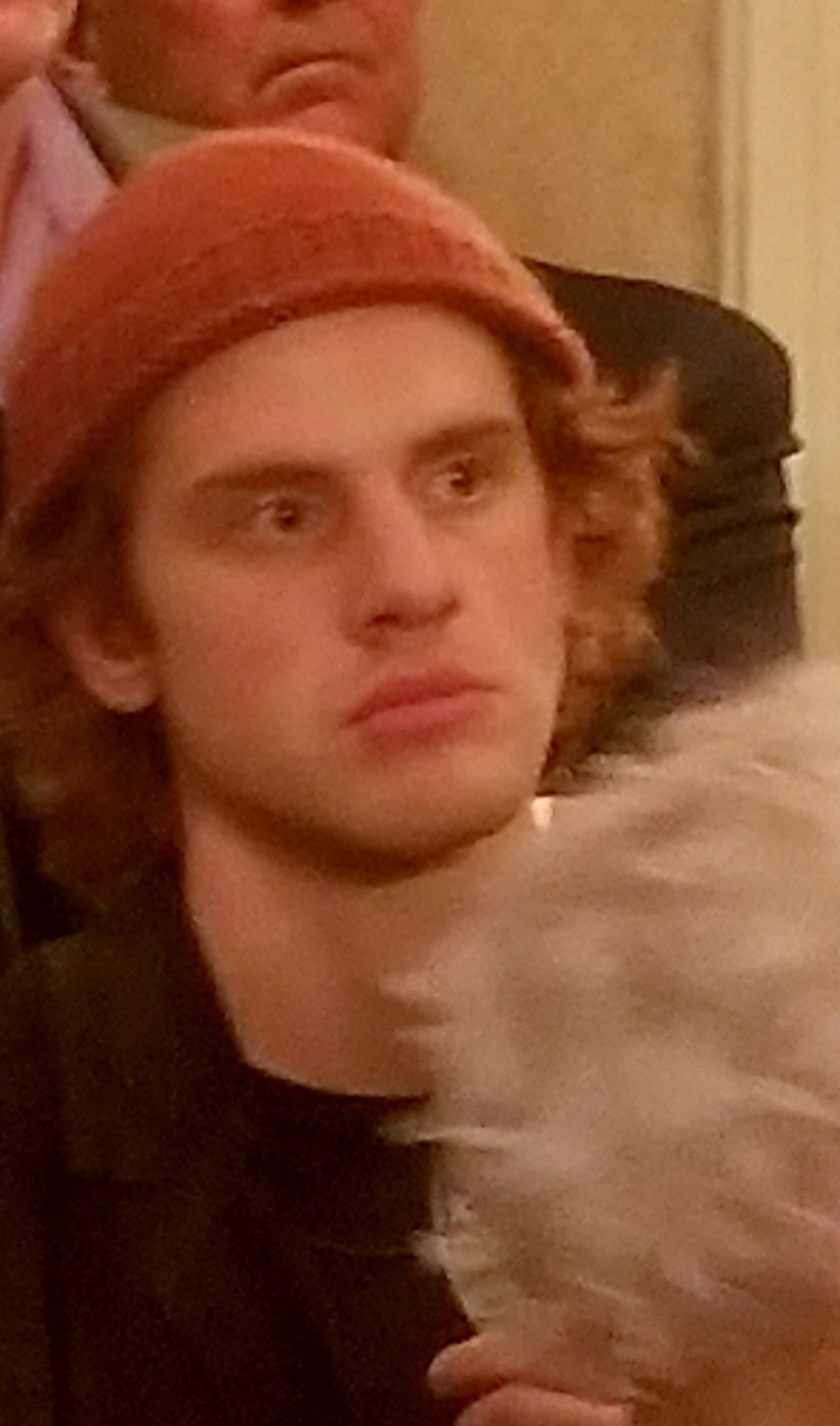 Both Washington and Scott said they haven’t yet endorsed a candidate for president and came primarily to learn more about Buttigieg. Each said they liked what he said about approaching the presidency with “a mayor’s eye.”

“It’s very inspirational to have another young, elected official talking about this stuff on a national level” and who looks at issues from a place “where the rubber meets the road,” Scott said. “It’s a message that needs to be heard by the rest of the country.”

Washington, who is gay, said she is encouraged to see an out candidate with an urban perspective running for president.

“I appreciate what he had to say about being a mayor and understanding the challenges that we face” as a city, Washington said. “And also, frankly, being an out elected official, it’s wonderful to see the historic nature of his race and what it says about our country.” 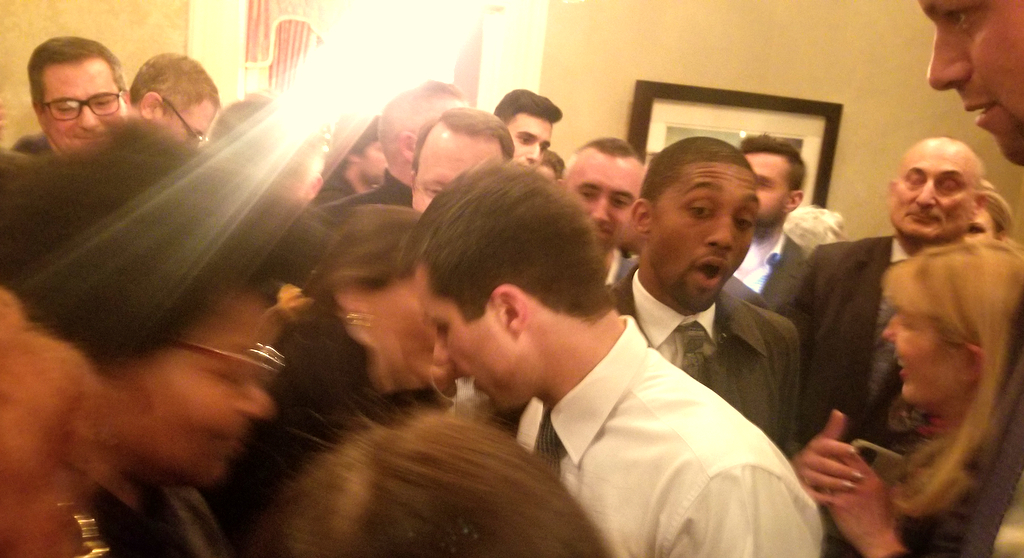 Brandon Scott was in the thick of a cheering crowd after Buttigieg was gifted the Lamar Jackson jersey. In the foreground was Mary Washington. (Ed Gunts)

Without referring to notes, Buttigieg laid out his vision for the country, including what he calls his “Frederick Douglass Plan” that focuses on ending systemic racism in the country and furthering economic empowerment, education and housing.

He talked about creating “health equity zones” for Baltimore that would be patterned after a program in Rhode Island, and a “barber shop health initiative” in which people who don’t usually go to a health clinic can get screening and detection at a barber shop where they do go.

At one point he paused, acknowledging – and chiding – the protesters outside with megaphones chanting “Wall Street Pete!” and “No McKinsey White House!”

Above all, he said, he would do more to use federal resources to support local solutions to urban issues.

Buttigieg’s remarks ranged from self-deprecating humor to wonkish budget talk and praise for his husband, Chasten Buttigieg, who wasn’t at the event.

He mentioned that he had started the day by meeting the Grammy-nominated singer Lizzo, when they were both in the green room ahead of appearances on “CBS This Morning.”

“She was very excited to meet me,” he said, “once she figured out I was Chasten’s husband.”

Buttigieg ticked off his well-known stands on subjects such as health care (he’s for “Medicare for all who want it”) and college tuition (“instead of free college for literally everybody, I’m going to make sure there’s free college for anybody where cost could be a barrier”).

He also said he wants to see the nation’s passenger rail system upgraded.

“I’m not asking for anything that is unreasonable,” he said. “I’m not even asking for Japanese-level trains. Just Italian-level trains would be great. It’d be better than what we’ve got.” 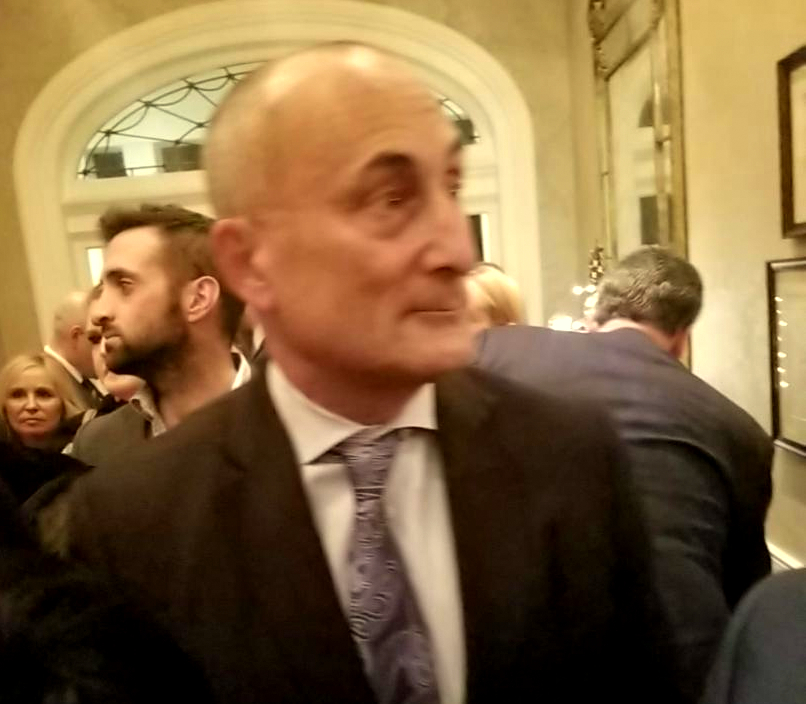 At one point he paused, acknowledging the protesters outside with megaphones chanting “Wall Street Pete!” and “No McKinsey White House!”

Buttigieg has been under fire for his past employment as a management consultant for McKinsey & Co., whose work has drawn scrutiny following investigative reports on, among other things, its role advising Purdue Pharma on how to amp up opioid sales and aiding foreign dictators  in Saudia Arabia and Russia.

Criticized for lack of transparency, he released a list of clients that included Blue Cross Blue Shield of Michigan and the U.S. Department of Defense.

Before resuming his remarks, he referenced the protesters.

“We’ve got some sound effects, too, which is also a good sign,” he said. “They’re part of our democracy and we share a lot of common goals, but obviously a somewhat different style on how to bring change about.”

Framing his modest political resume as a virtue, the 37-year-old Buttigieg told the donors he has observed a pattern:

“Every time in American history that my party has taken the White House in the past 50 years, certain things have been true about the nominee. 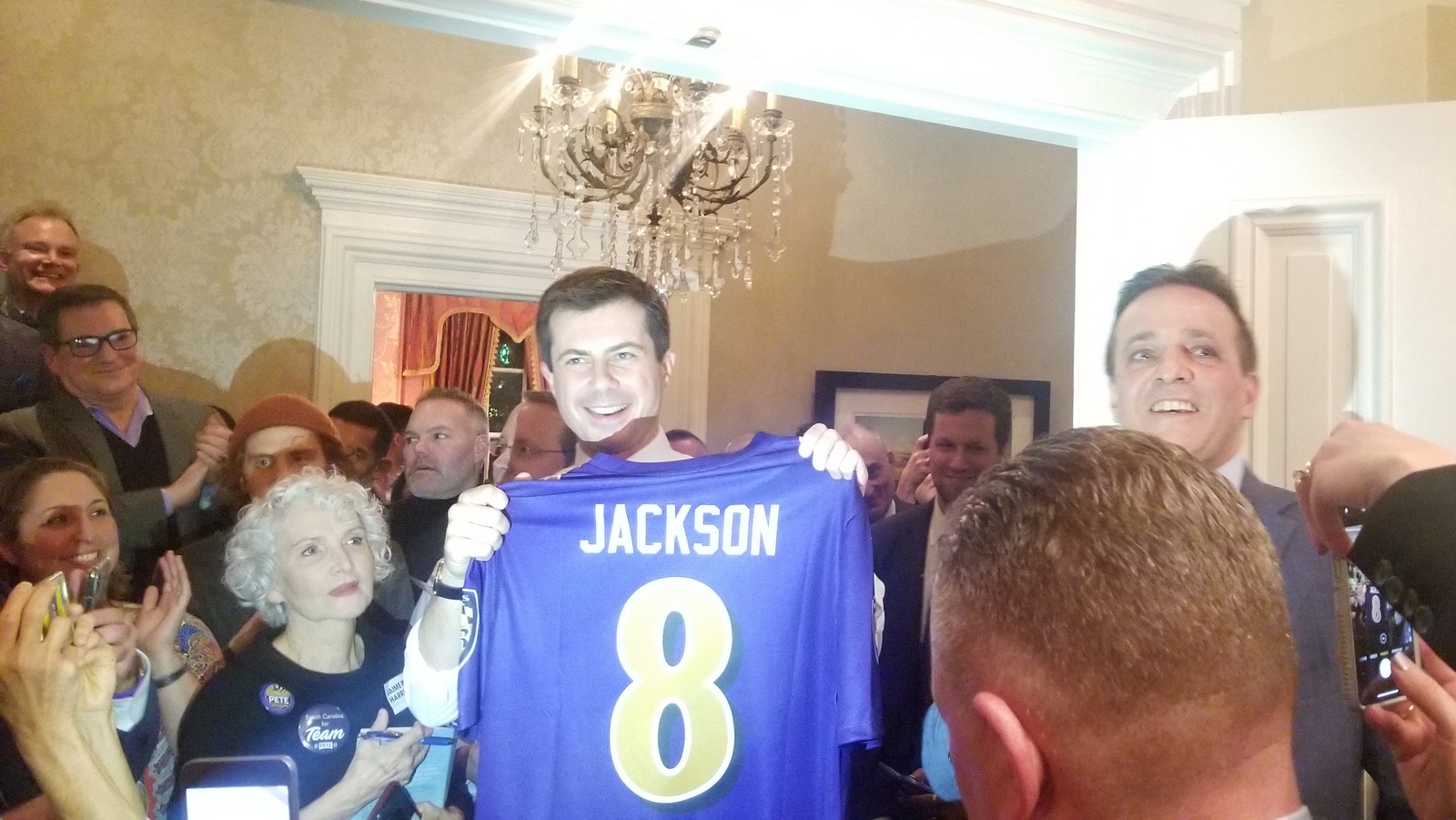 The crowd applauds as Buttigieg holds up the Lamar Jackson jersey. (Ed Gunts)