Mismanagement, lack of accountability and poor employee deployment have “overshadowed the hard work of the men and women” at the Bureau of Solid Waste, a division within the Department of Public Works, according to a report issued by her office.

The investigation found that curbside pickup frequently undergoes route delays because the agency is chronically understaffed – leading to garbage piling up on the streets and alleys even as overtime costs skyrocket.

In a review of overtime slips at the agency’s Reedbird and Bowley’s Lane yards, investigators found “questionable justifications for overtime, wasteful overtime practices and discrepancies in the actual overtime worked by an employee and the number of compensated hours.”

Among the pickup crews, overtime was “skewed.” A few employees doubled, or nearly doubled, their regular salary with 1,000 or more hours of overtime, while other employees got as little as one hour of overtime per year. 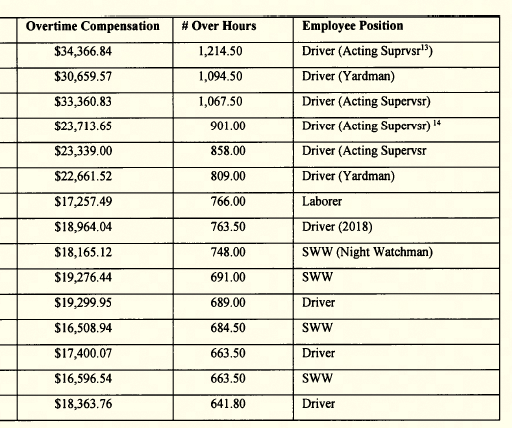 Supervisors regularly paid crews an hour or more of overtime as an incentive to get them to complete their route or service a new route.

In one case, a crew was paid for working 14 hours when a GPS tracking device showed that their truck was out of the yard for less than 10 hours.

There were other instances where the administrative paperwork said a route began at 6 a.m. and concluded at 4 p.m., but the GPS device showed “the truck was stationary well after 6 a.m. and came back to the yard prior to 4 p.m,” the report said.

Driving up costs were such archaic practices as requiring supervisors, superintendents and yardmen to all remain “on location” until the last crew completed its route.

This practice not only resulted in “unnecessary accrual of compensatory time in addition to overtime,” the report said, but made it difficult to determine what employees had access to keys at solid waste yards, raising questions about the safety and security of the facilities.

To keep residential pickups from falling too far behind schedule, personnel were “borrowed” from other bureau operations, such as rat abatement, vacant lot clean-ups and the collection of bulk garbage.

The “borrowed” employees did not work under the same union rules as the garbage crews, which meant that they often clocked out before a route was completed.

A crew was paid for 14 hours when a GPS tracking device showed that their truck was out of the yard for less than 10 hours.

When this occurred, a garbage crew would have to return to a yard – often miles away from their pickup route – and wait for another employee to become available, delaying the pickup schedule while increasing crew costs.

Solid Waste is a division of DPW, whose director, Rudy Chow, is scheduled to retire on February 1. The bureau is curerntly managed by John F. Chalmers and broken down into eight quadrants and divisions.

As of July 2019, three of the eight units had vacant top positions and a fourth was filled by an acting chief.

Solid Waste often borrows crews from other operations, such as rat abatement, vacant lot clean-ups and the collection of bulk garbage.

Garbark acknowledged that “relying heavily on overtime is a problem. We are actively examining ways to we can reduce overtime whenever possible.”

He said division chiefs, superintendents and supervisors are responsible for tracking overtime hours, and “it is at their discretion to manage and equalize overtime hours.”

However, he promised that senior management will “issue a memo stating that supervisors are to manage and equalize all overtime hours” and said a Standard Operating Procedure (SOP) will be created “to regulate how overtime is approved.”