A Baltimore water pipe sprang a leak last week, sending a geyser of water 40 feet into the air and back down into Dead Run – the same small stream that suffered a pipe break in September that killed 2,000 fish.

The latest break occurred just two days after residents and a representative of Blue Water Baltimore were at City Hall for a hearing, chastising Department of Public Works (DPW) officials who took three days to turn off valves last September and stop the flow.

George Farrant, the citizen who first reported the earlier break, saw this one at the place where Dead Run empties into the Gwynns Falls.

He described it as a shocking sight.

“It was going hard, like Old Faithful, for about three or four hours,” said Farrant, emitting the strong odor of chlorine, the chemical in treated drinking water that poisons wildlife.

“It was spurting up higher than the trees,” he added.

Asked last week to provide details about the latest incident and the city’s response, DPW has had only this to say:

“There were no fish kills observed and minimal chlorine levels detected. DPW’s field scientists were there twice,” spokeswoman Jennifer Combs said in an email to The Brew.

The Maryland Department of the Environment (MDE) has not yet responded to a request for comment.

UPDATE from MDE: “Baltimore DPW reported the water main break to MDE on January 16 and told us that they had become aware of it that day. MDE went to the site that day (and also on January 17 and yesterday, January 21) and observed DPW’s ongoing response to repair the break and their placement of dechlorination tablets in Dead Run. We have seen no dead fish or adverse impacts to the waterway.” 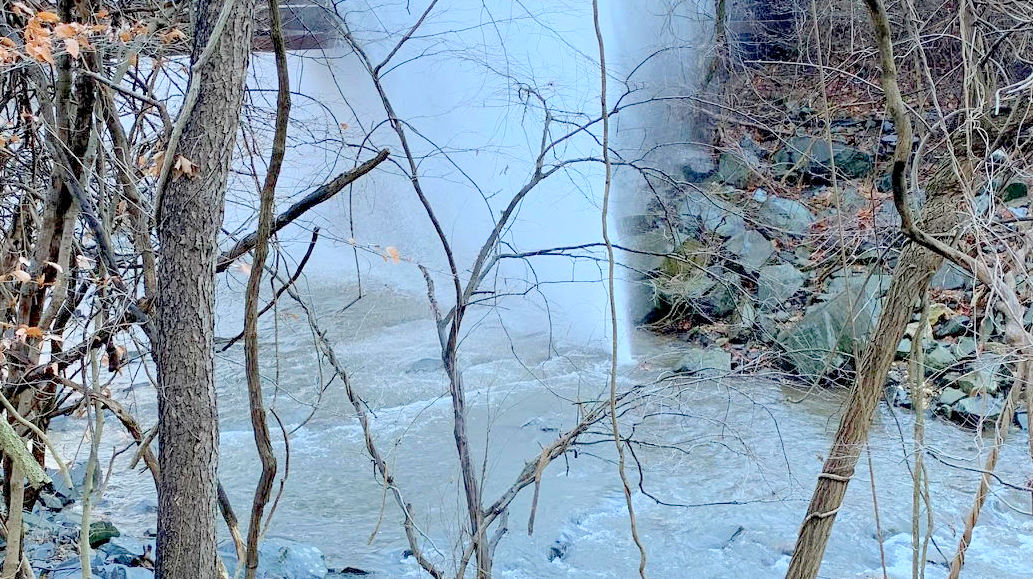 According to Farrant, vice president of Friends of Gwynns Falls/Leakin Park, the break was reported at about 6:30 a.m. on January 16 by a passing bicyclist, who saw the gushing water near the confluence of the two waterways off Franklintown Road near Weatherdsville Road.

When Farrant arrived at 9 a.m., DPW workers were there, he said, and contractors were on the scene at about noon.

By 3 p.m., they had excavators and other equipment at the scene and had reduced the flow “by about 90%,” and the water was no longer spewing so high, he said.

“I’m pleased they came out quicker this time, but I hope they’re not going to leave it like this.”

Compared to the previous incident, in which the city did not respond for 72 hours, DPW’s performance this time was greatly improved, Farrrant said.

“I’m pleased they came out quicker this time, but I hope they’re not going to leave it like this,” he said, noting that a small amount of water is continuing to leak from the pipe.

He was concerned about what workers told him was a temporary patch in the water main, which had been found with a 4″ x 4″ square hole where the pipe crosses the stream.

Drinking water is treated with chlorine at levels that are toxic to wildlife. In the case of the September pipe break, which resulted in dead fish and eels washing up downstream, MDE found chlorine at eight times the permitted level for a waterway.

DPW was also cited for the release of chlorinated water into the Jones Falls from Druid Lake.