For a freshman politician who has introduced ethics bills and established a reputation as a reformer, it is a startling revelation:

News of the contributions has riled some residents, who say they were only recently made aware that Columbia-based Clinic Management and Development Services Inc. (CMDS) is planning a 104-bed in-patient drug treatment center at 6040 Harford Road.

The company starting the new treatment center – to be located a short walk from a library and an elementary school – is the administrative arm of the city’s largest methadone facility, Turning Point Clinic in East Baltimore.

Dorsey said he supports the treatment center project while insisting that his position was not influenced by the large slug of money that company officials handed him.

The total $42,000 – including $6,000 from CMDS president Kevin Karl Pfeffer – comprises nearly a third of Dorsey’s reported fundraising for the past year.

“I believe I’ve been forthright,” he told The Brew, reminding a reporter that no one accepts campaign money without knowing “it will become public.”

Asked if he can be impartial given his sizeable haul from CMDS, the 3rd District councilman answered: “yes.”

Dorsey pointed out that he had rejected money from a local business owner last year. “It sounded too much to me like they were making a direct ask for favorable consideration,” he explained.

Online he has said of CMDS, “I’ve promised them nothing.”

Community leaders such as Angela Jancius, president of the Westfield Neighborhood Improvement Association, said they hadn’t been informed of the company’s plans until recently and were surprised at the lack of communication from Dorsey.

There has been no public announcement or community meeting about the facility, though Jancius’ group has now scheduled a neighborhood meeting next month with company officials slated to appear.

Jancius said the community understands the need for compassion and treatment for drug addiction, but fears the impact of a facility so close to a school in a neighborhood actively courting families and small businesses.

She said she is concerned about the project’s impact not just on schoolchildren but on parents who may be dealing with their own addiction issues.

“They don’t need to go to school and see people with those struggles,” Jancius said. “Don’t give them a potentially bad environment.”

Overall, she said, the proposed facility “is going to really screw up the community.”

On social media, debate has been vigorous, with some pointing out the need for treatment beds, calling fears overblown and cautioning critics about snap judgments, stereotyping or shaming. 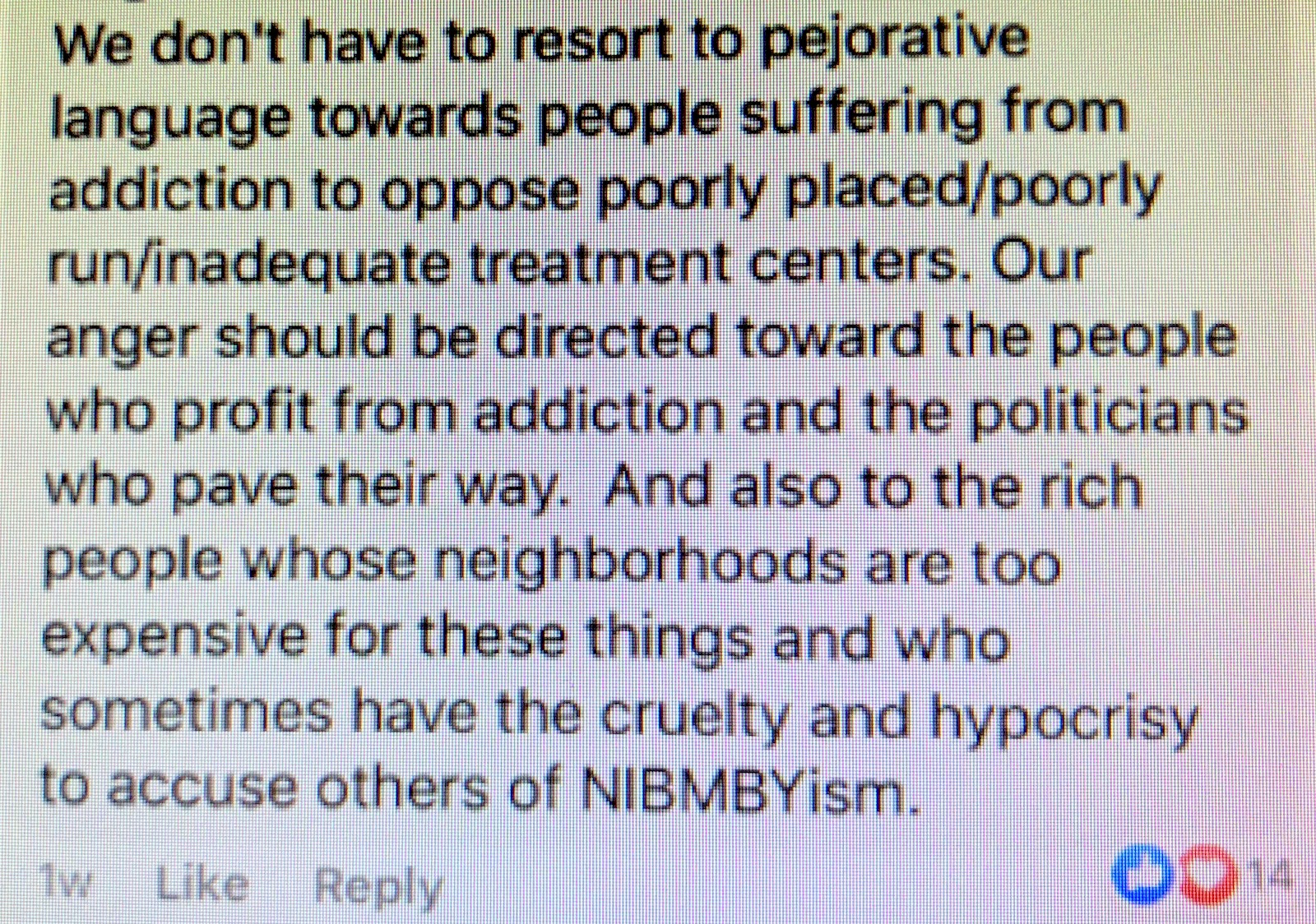 The Brew traced the following contributions from CMDS/Turning Point employees as well as from people who appear to be affiliated with them by address or surname.

Two of the contributors share an address in Washington state, documents on file with the Maryland State Board of Elections show.

All seven contributors gave Dorsey contributions of $6,000, the maximum individual amount permitted in Maryland during a four-year election cycle:

Dorsey said he finds nothing wrong with putting a drug clinic at that location.

“I’m not aware of any evidence that people who require treatment for medical conditions pose any inherent threat to society,” he told The Brew.

Asked about the contributions, CMDS president Kevin Pfeffer said in an email that he plans to support candidates who understand drug treatment.

“Frankly, it’s the city’s only hope, it truly is,” the Clarksville resident said. “Of course, I know no one wants it in their backyard.”

The city has given the company seven construction permits since last July, including two in the days following the contributions, according to the city’s online permit search.

The other contributions, from Pfeffer and the others, were recorded on October 19 and 22. CMDS received permits for work on the building on October 23 and 24.

The company has not received a permit for use and occupancy, which it needs before it opens. 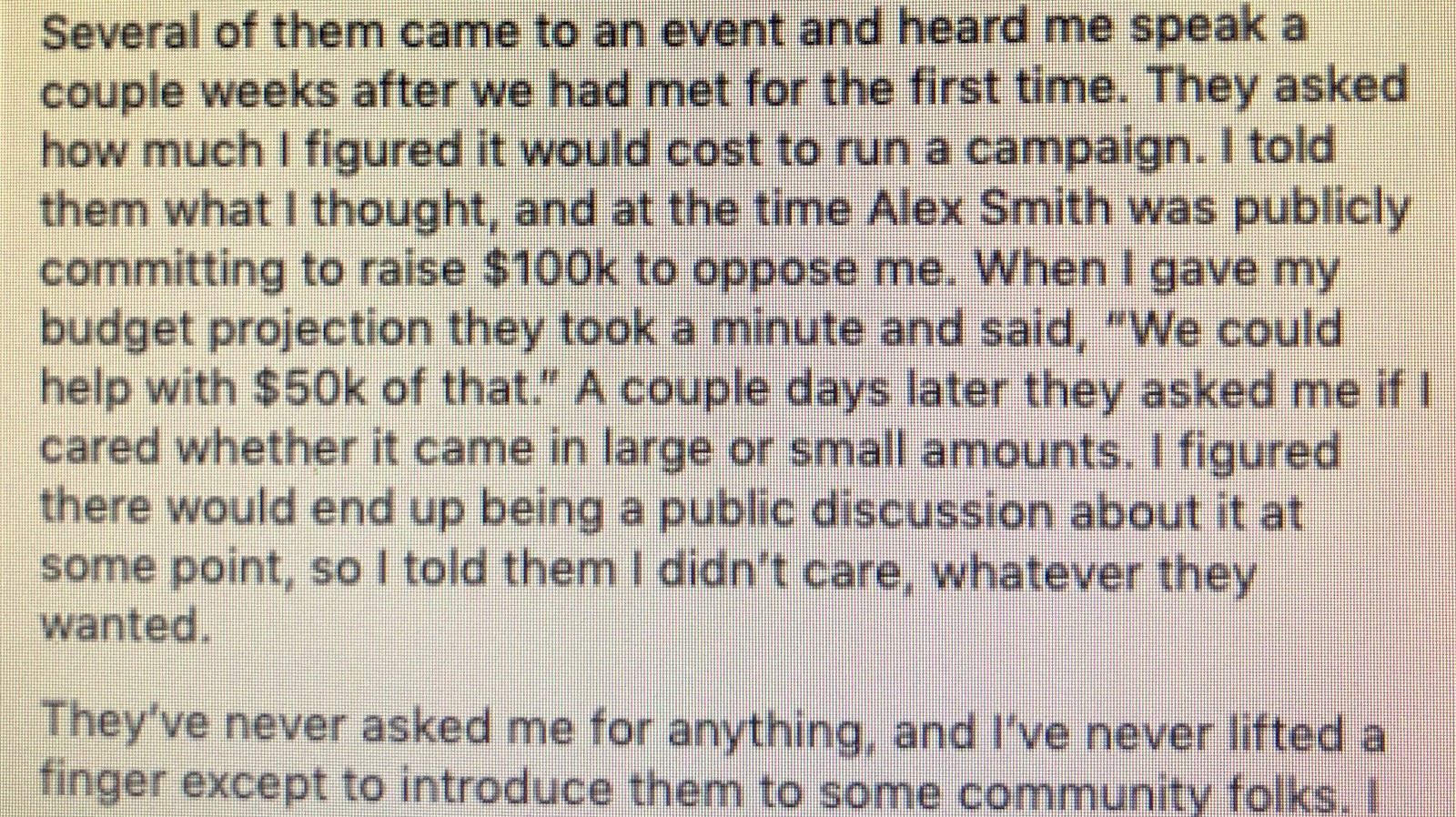 Ryan Dorsey Facebook comments about accepting $42,000 from people associated with CMDS, the company planning a drug treatment center in Hamilton.

Pfeffer told The Brew in an email that he bought the property “precisely because it already had the proper zoning and approvals. . . long before I knew of the councilman.” He said he “does not seek Mr. Dorsey’s assistance with anything.”

Pfeffer said he admires Dorsey, noting “he is a recovering alcoholic, which means he knows what addiction is, and the proper role and value of available, quality treatment.”

On Facebook, Dorsey recounted how the company first told him about their plans in September and then approached him after an event and asked him what it will cost to run his political campaign.

“When I gave my budget projection, they took a minute and said, ‘We could help with $50k of that,’” he said.

“A couple days later, they asked me if I cared whether it came in large or small amounts,” he continued. “I figured there would end up being a public discussion about it at some point, so I told them I didn’t care, whatever they wanted.”

Jancius said some residents are concerned because of what they heard about the clinic developer’s reputation.

While police cleared the building that day, clinic director Rev. Milton Emanuel Williams Jr. told a reporter that the unannounced visit was a “routine audit.”

Williams said Turning Point, which serves more than 2,000 patients a day, is the largest methadone clinic in the country.

Richie Keller, 35, said he moved to Hamilton from Union Square after a methadone clinic was established there. He said the value of his home dropped from $118,000 to $86,000 within three years after the clinic was built.

Keller said he understands the need to treat people struggling with substance abuse, but worries that the facility – together with the proposed Royal Farms gas station nearby on Harford Road – may add to the neighborhood’s crime and drug problems.

“The police do nothing about drugs in this neighborhood,” Keller, a city schools teacher, said.

He said Dorsey and other city officials should have asked area residents before taking a position on CMDS or giving them permission to come in.

“You shouldn’t do anything without the neighbors,” Keller said.