Impeachment, the Iowa caucuses, a mayor’s race – the heavy barrage of political news may have caused you to miss it, but there’s a special primary being held here tomorrow (February 4).

The winners will face off in a general election April 28 to serve out the remainder of Cummings’ term, which ends next January 3.

Not sure you’re in the 7th District?

You can be forgiven for that, too, since the heavily gerrymandered 7th lurches crazily around the landscape, including locations as far apart as Hunt Valley in Baltimore County and Lisbon in Howard County, as well as much of, but not all of, Baltimore City.

Go HERE and plug in your address to find out if you are eligible to vote in the 7th. Go HERE to find your polling place.

A total of 32 candidates are vying for the seat held by the iconic Baltimore Democrat, who was elected in 1996 after a career as a civil rights advocate, lawyer and state delegate.

Observers are watching the Democratic side of the race closely, as the district has voted “blue” exclusively since it was created in 1953. 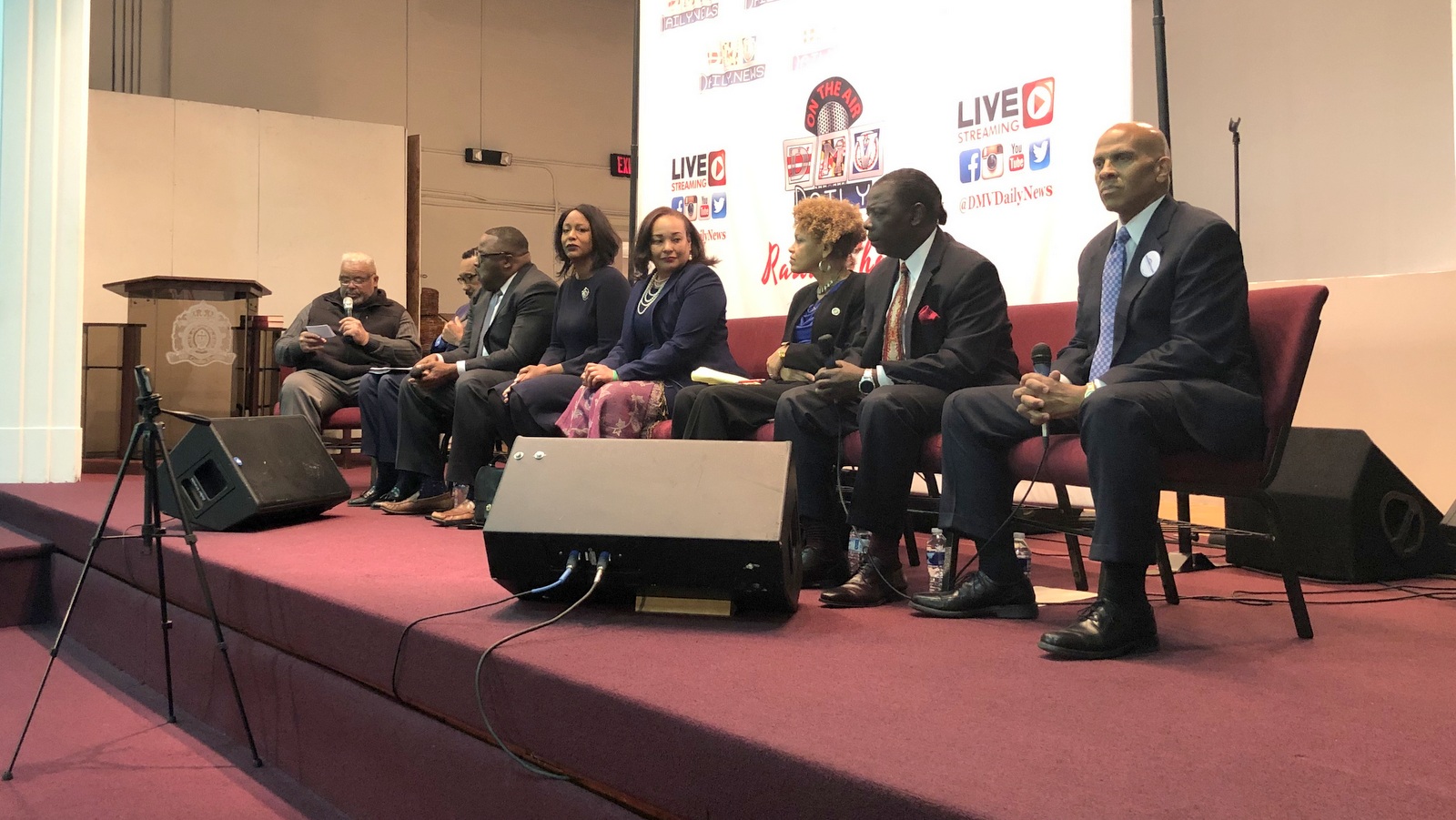 At a debate in Baltimore, candidates offered their vision for the 7th Congressional District. (Ian Round)

The time available to campaign has been brief – Cummings died on October 17 – but the stakes are high, with struggling West Baltimore at the heart of the district.

Cummings pushed for funding for the city and defended its honor when it was mocked on Twitter by President Donald Trump.

His role as a leader in the Congress will be even harder for his successor to fill. After Democrats won the House majority in the 2018 midterms, he became the chair of the powerful Oversight Committee, where he led House investigations into Trump.

The question of the late congressman’s legacy and who continues it has been one source of melodrama in an otherwise lackluster campaign.

Among the candidates are three people who spoke at Cummings funeral – and who each say they are his rightful heir:

Kweisi Mfume, who represented the district for 10 years before Cummings; Maya Rockeymoore Cummings, his widow; and longtime aide Harry Spikes.

Two of Cummings’ sisters have endorsed Mfume, and one has endorsed Spikes, who also has the endorsement of two daughters from Cummings’ previous marriage. 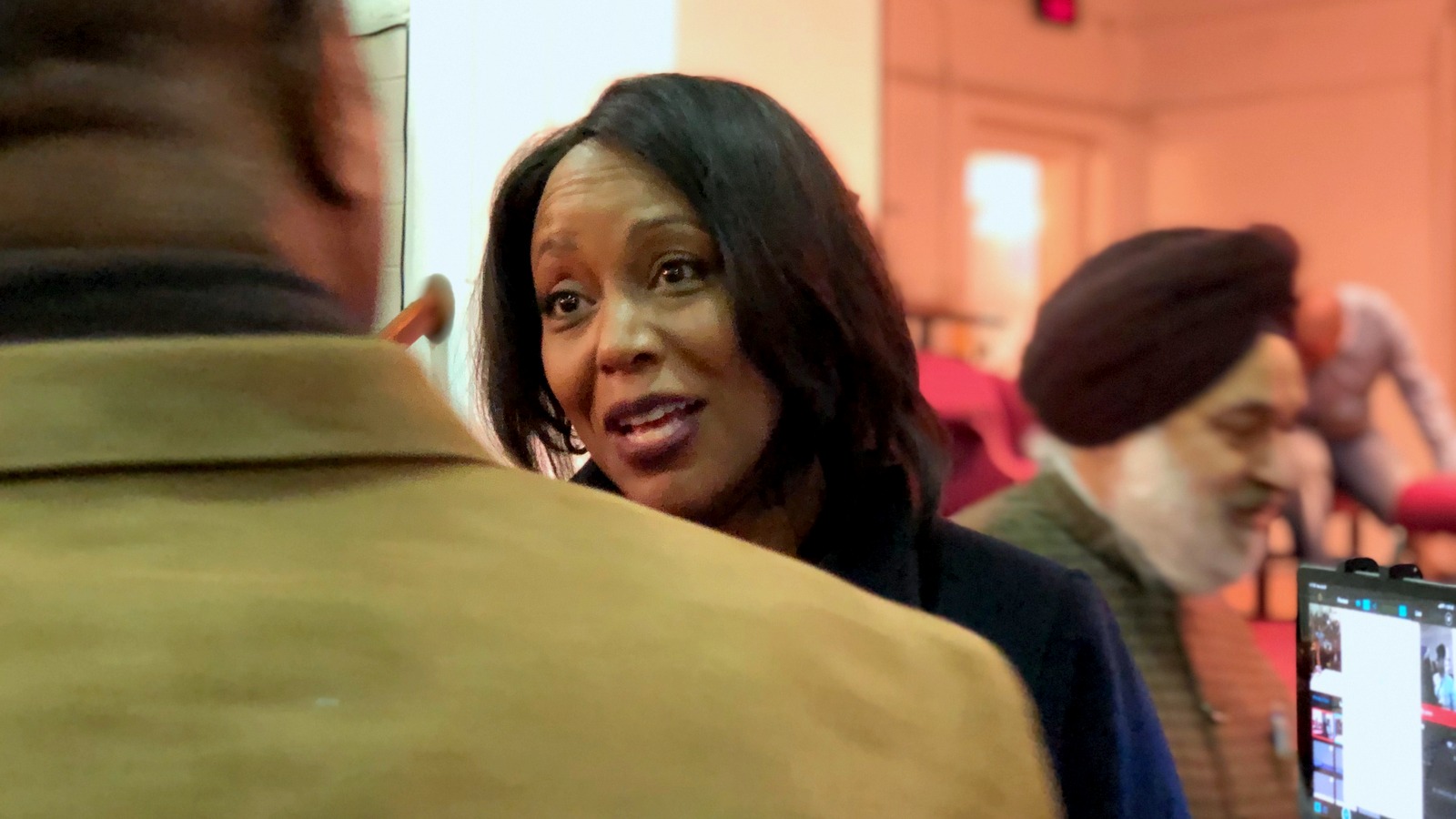 Maya Rockeymoore Cummings speaks with an audience member after the debate. (Ian Round)

The other controversy involves Mfume’s time at the NAACP.

He left his seat in Congress to lead the organization but was pushed out as president amid reports of an improper relationship with an employee as well as an investigation into an allegation of sexual harassment and assorted management failings.

Mfume said the workplace relationship was ill-advised (“I shouldn’t have done it”), but consensual.

Still, the issue has put him on the defensive. He held a Women for Mfume rally last week and yesterday staged a “special prayer service for women and people of faith who support Mfume” at Baltimore’s New Shiloh Baptist Church.

At a recent forum, his female opponents stressed their commitment to gender equity issues and shared their own experiences of sexual harassment. 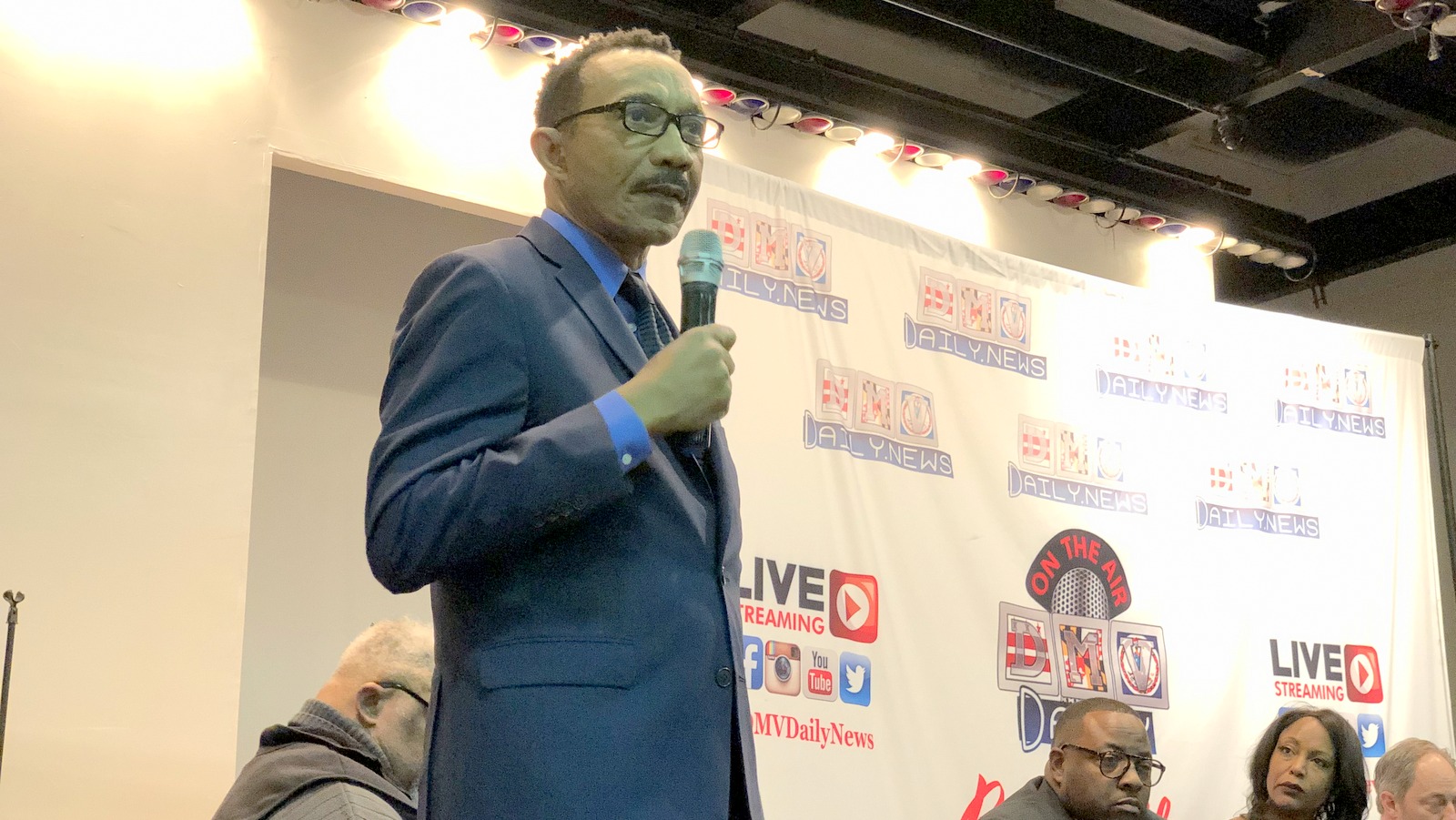 Kweisi Mfume is campaigning to get his old Congressional seat back. (Ian Round)

Among the higher-profile hopefuls is state Senator Jill P. Carter, 55, a lawyer. As a 2003-2017 member of the House of Delegates, Carter earned a reputation for clashing with the party’s mainstream, leading critics to call her ineffective amd supporters to praise her as principled.

In 2018, she was elected to represent Northwest Baltimore’s 41st District after the resignation of Nathaniel Oaks amid federal corruption charges. There she successfully sponsored a number of progressive measures, including one that bans employers from inquiring about an ex-offender’s criminal record before a job interview.

Carter was also credited with supplying the tip that began the Healthy Holly book scandal that took down former Baltimore Mayor Catherine Pugh. A Bernie Sanders delegate, Carter is running on a Medicare for All/Green New Deal platform.

She invokes her late husband’s name and legacy wistfully at every opportunity. She promises single-payer healthcare, gun reform and a $15 minimum wage.

In November, Democratic Party officials said the organization had overspent under Cummings and lacked proper fiscal controls. In December, The Washington Post reported that she improperly mingled the funds of her a business and a charity she owned.

But his candidacy is drawing heavily on the reputation and relationships he built over a long political career.

In an autobiography, Mfume chronicled his rise from a wayward West Baltimore youth named Frizell Gray to a five-term Democratic congressman.

Despite the issues leading up to his departure from the NAACP, which he has declined to discuss in detail, Mfume was widely credited with rescuing the organization from financial trouble.

Now the chairman of Morgan State University’s board of regents, he was asked at a recent forum where he falls on the political spectrum. His answer was “a progressive moderate.”

Others in the Race

In addition to Harry Spikes, other candidates on the Democratic side include:

• Talmadge Branch, majority whip in the House of Delegates.

• Michael Higginbotham, a professor at the University of Baltimore School of Law.

On the Republican side, Reba A. Hawkins, Kimberly Klacik and Liz Matory are among the more visible candidates in a district that leans overwhelmingly Democratic.

Most of the hopefuls have provided answers to questions on multiple issues in the Special 7th District Primary Election Guide produced by the League of Women Voters.

A final note: If you regret your vote, don’t worry. You will get another chance later this year when the candidates will run to serve for a full term.