For weeks now on social media, city officials promised a “community discussion” about a major overhaul of the Druid Hill Park Aquatic Center, amid pool users’ concern about the long-delayed project’s timetable and intense criticism by some over the plan’s 79-space parking lot.

But last night, instead of standing before the crowd to present the project and allow questions or comments from the public, Baltimore Recreation and Parks positioned mid-level staffers next to colorful informational displays.

There was no presentation, no microphone – and no opportunity to speak. People were apparently expected to glean what they could by circulating through the room, then fill out comment cards, drop them in a box and leave.

Ken Morgan and Margaret Musgrove were having none of it.

“This is not satisfactory,” said Morgan, a longtime pool user. “I came here thinking this was going to be a sit down. This is not a meeting. This is a depiction of what is.”

“They’re telling us what it’s going to be, so there’s no input from us,” Musgrove said, rolling her eyes. 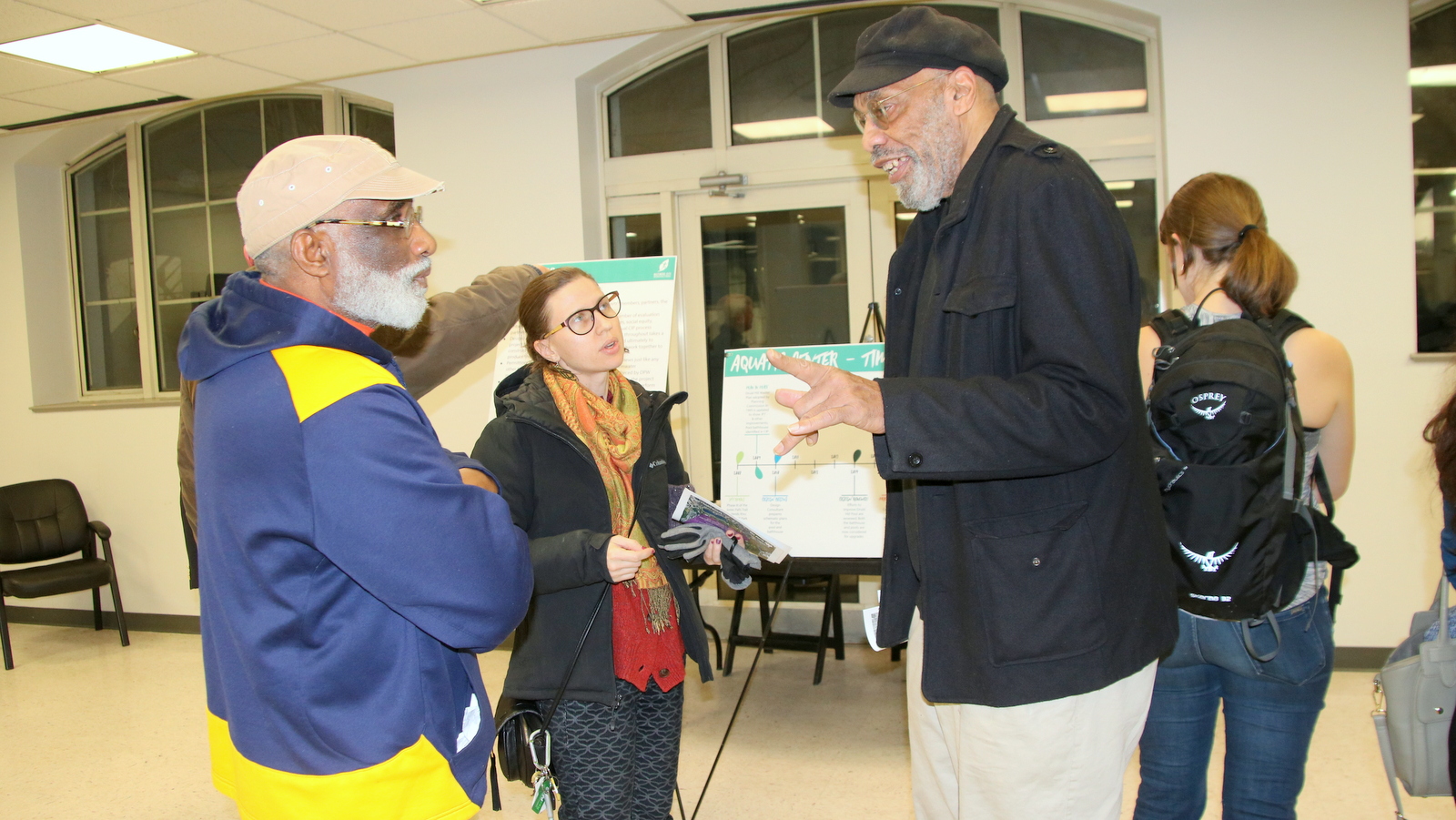 To Graham Coreil-Allen, the display about the parking lot was a good example of the gathering’s done deal feel.

Alternatives suggested by critics, who have questioned encouraging more auto traffic in the city’s premier park, were addressed on the “Parking Lot FAQ” poster – and, in all cases, were shot down.

What about a shuttle from Mondawmin Mall or some other transit hub? “There is no funding,” the poster copy replied.

Could cars be encouraged to park at the nearby Stieff Silver or Boy Scouts parking lots? No, it warned, “those are private property.”

“The way this is framed suggests there is no other alternative,” Coreil-Allen complained. “They leave no room for actual discussion. This is their strategy.”

Handing off a reporter to a marketing staffer, Rec and Parks Director Reginald Moore quickly fled the room.

Spotted in the room towards the end of the two-hour session, Rec and Parks Director Reginald Moore was asked why the format was chosen.

He handed off a reporter to marketing staffer Tierra Brown and quickly fled the room.

“We thought the one-on-one conversations would be very helpful to people,” Brown said. 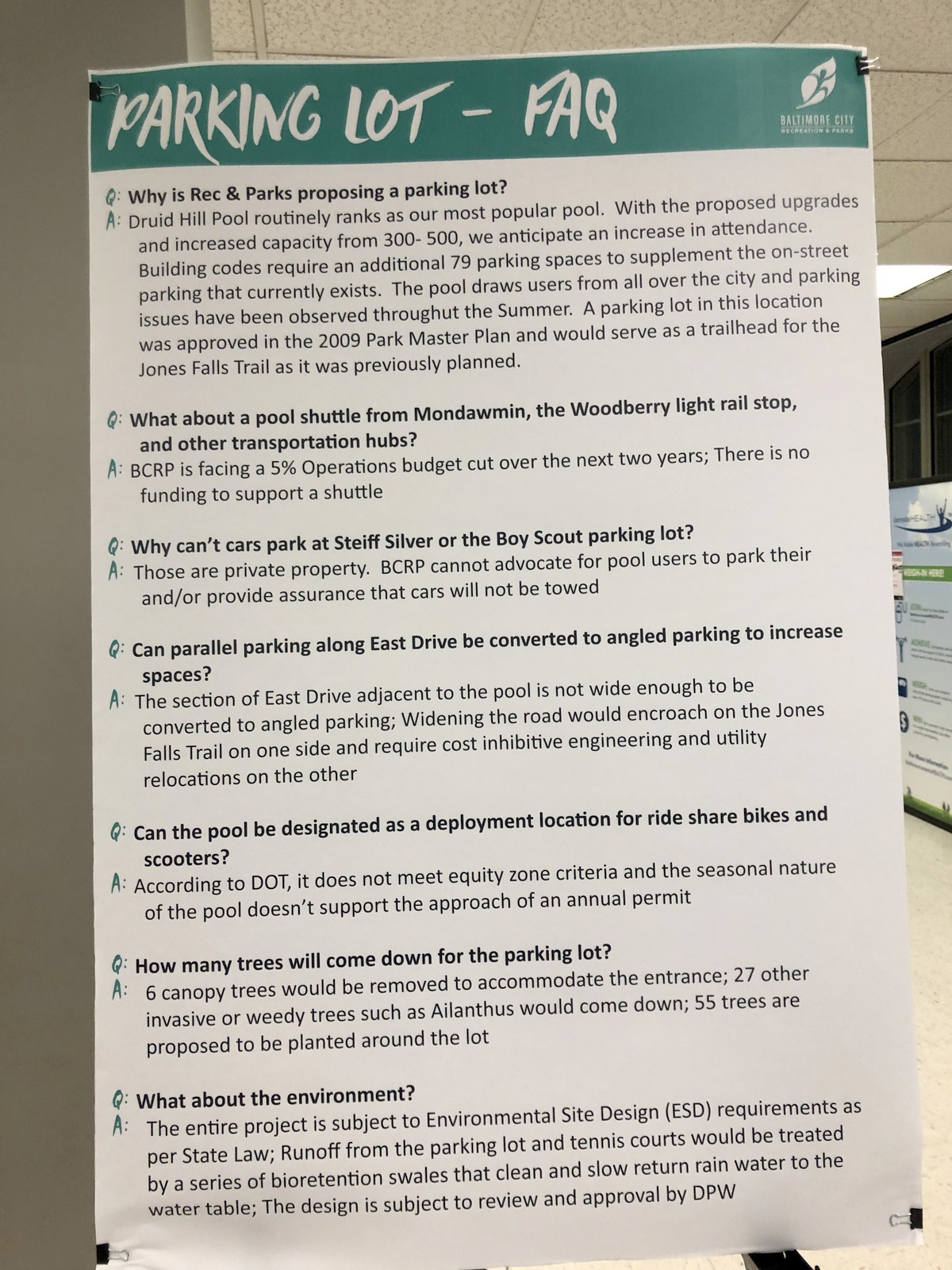 One of the information stations at a meeting at Recreation and Parks headquarters about the parking lot planned as part of a Druid Hill Park Aquatic Center makeover. (Fern Shen)

Not everyone who came to the meeting was opposed to the parking lot. Many simply wanted to know if construction would begin this June, as scheduled, and how long the pool would be closed.

Rec and Parks previously said the project would result in the cancellation of both the 2020 and 2021 summer swim season, but now that timeline is uncertain.

The reason stems from the Young administration’s decision to skip over a City Council “conditional use” vote, which is still required for the parking lot portion of the project to move forward.

The Council’s Land Use and Transportation committee declined to vote on the parking lot bill last month amid strong criticism that legislators and the community had been shut out of the planning process.

Nevertheless, as The Brew reported, a $10.1 million contract for the entire project was scheduled last week before the Board of Estimates. (After Council members and community critics cried foul, it was deferred.)

Why did the city push ahead with the contract before the Council approved the ordinance?

It fell to William Andersen III, the Rec and Parks project manager, to explain last night.

Andersen said the decision was made because there were already multiple approvals from city departments and the Planning Commission, and officials wanted to stick to the timeline.

“In order to have the pool only be closed for two swim seasons, we wanted to start construction in June,” he said.

Andersen said revising the contract to remove the parking lot would delay the entire project by about six months.

“If the communities and all the governing bodies stop us, say that we don’t have approval, we will be looking at removing the parking lot out as a change order,” he said. “That will take time to redo the plans and go back through permit reviews.” 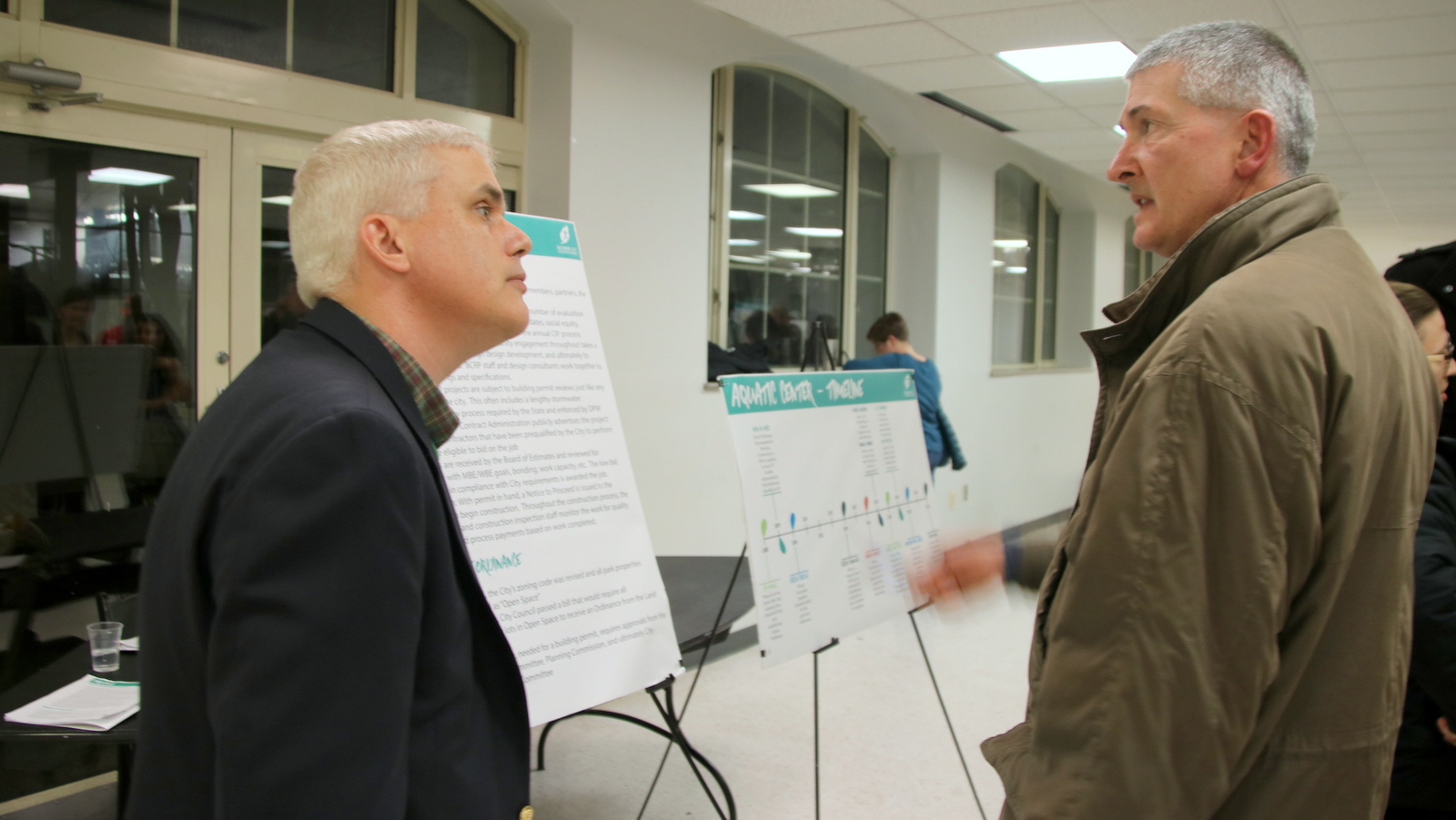 Aquatic Center Project Manager William Andersen talks to a resident about the timeline for the project. (Fern Shen)

That prospect concerned the diverse crowd attending the event. Some were participants in the water-themed performance group Fluid Movement, while others were pool users from predominantly African-American neighborhoods concerned the project is leaving them out.

“I started coming here when I was a kid. I’d walk over from Fulton and Baker streets – that was right after they started letting blacks use this pool,” a 74-year-old man said.

He said he felt insulted that pool users like himself, who pay a special $50 monthly “Country Club” fee for adult hours at the pool, weren’t informed of the meeting.

Others expressed concern about the loss of park green space, a habitat for nesting Orioles, and the fact that trees will be cut for the proposed parking lot.

At the Council’s January hearing, a Rec and Parks spokesman said that two or three trees would have to be cut.

Yesterday, officials confirmed that six canopy trees would be removed, and 27 invasive or weedy trees, such as Ailanthus, must “come down.” 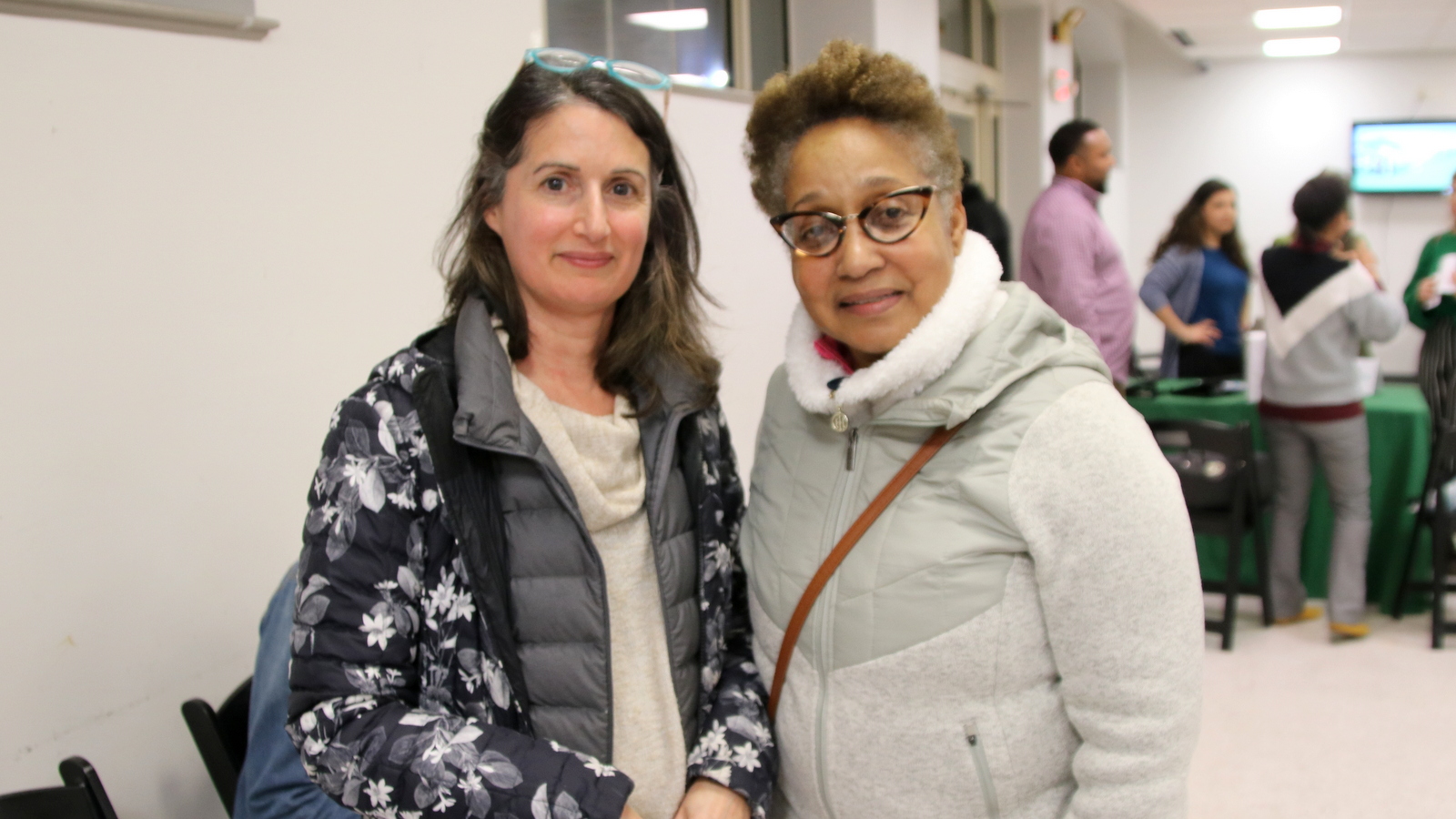 Some pool users said last night that it would make no sense for Rec and Parks to close the pool this summer if the entire project is delayed six months.

Asked about that scenario, spokeswoman Whitney Clemmons Brown told The Brew today, “In that case, we would work to get the pool open this swim season.”

Bikemore executive director Liz Cornish was skeptical that the issues raised about the parking lot would necessarily mean a six-month delay in starting construction on the pool.

“There are solutions that could happen in the next 60 days that could get us to a place where folks are supportive of the project,” Cornish said. City leaders “should step in and make that happen.”

The public, she added, should not be blamed for holding up the pool project when Rec and Parks moved ahead with the contract without first obtaining Council approval.

“The only people that derailed the process is the city itself.” 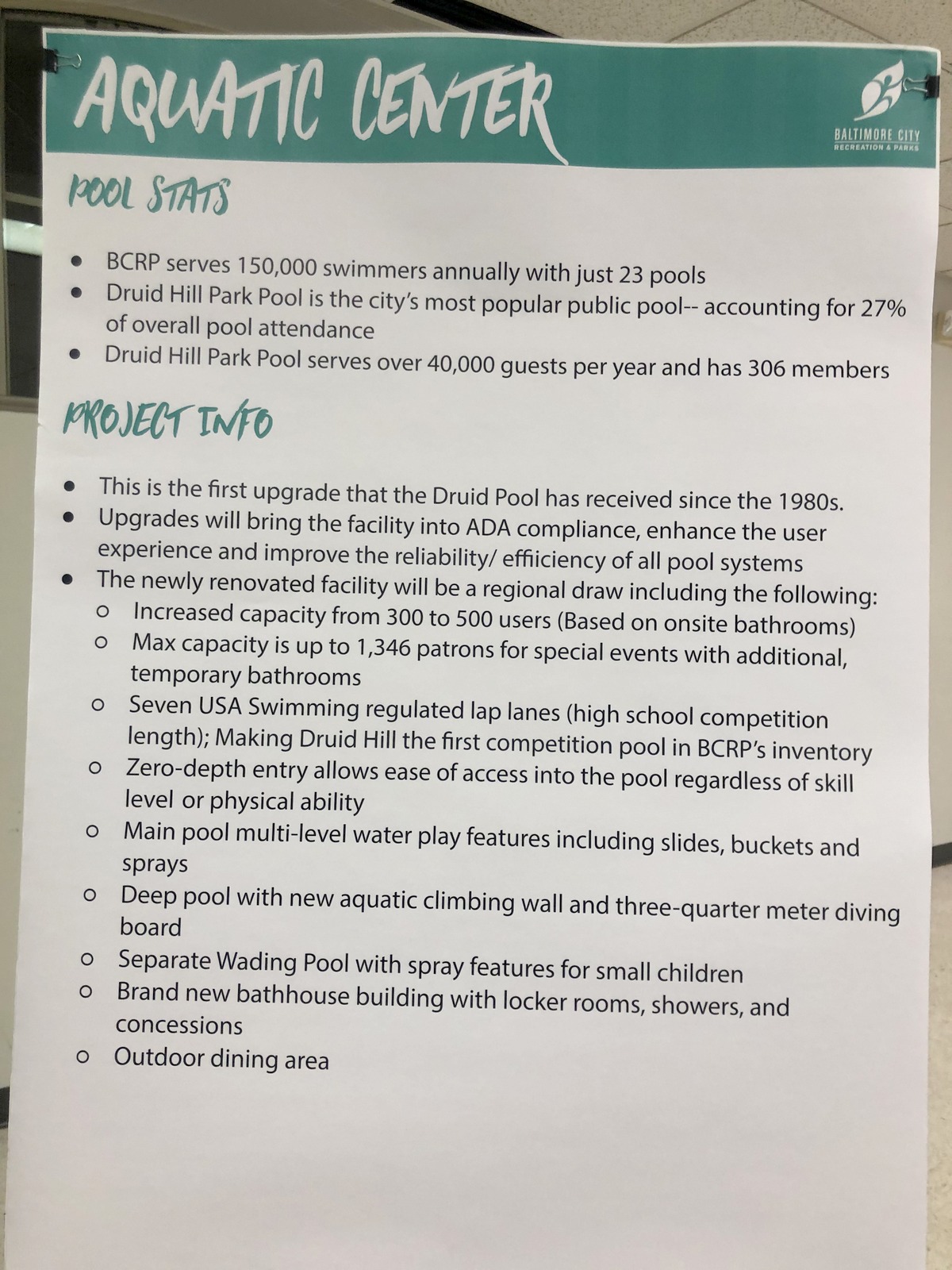