The man who died on Monday at the sprawling water tank project inside Druid Hill Park was a 73-year-old truck driver who looked forward to retiring later this year, sources tell The Brew.

He worked for Jerry Preston Hauling and Material Supply, a subcontractor for Oscar Renda, the Texas company awarded a $134 million contract to build two underground water tanks at the Druid Lake reservoir.

The Department of Public Works, whose inspectors and on-call consultants oversee the project, has declined to name the worker, his employer or provide other information about the accident.

A DPW spokesperson said the agency was referring all calls to the contractor. Jerry Preston, owner of the Jarrettsville-based trucking company, did not respond to several messages left at his office and home.

Spokesmen for the Baltimore Police Department and the Maryland Department of the Environment (MDE) said they had no information about the accident.

Fallon Pearre, communications director for the Maryland Department of Labor, said safety inspectors are “aware of the incident, but because it is an ongoing investigation, we can provide no further details.”

A report on the fatality, she said, could take anywhere from a few weeks to a few months to complete.

Shortly after 6 a.m. on Monday, a man identified as Calvin M. Stewart (known as “Randy Calvin” to fellow truckers) stopped his Peterbilt dump truck near a concrete mixer to get his ticket signed.

While standing between the truck and a wheel loader, the truck drifted forward, crushing him, sources said.

Badly injured, he was taken to Shock Trauma at the University of Maryland Medical Center, where he was pronounced dead.

“He was a real nice guy,” a trucking friend recalled yesterday. “Just recently he told us this was his last year working. He said, ‘I’m going to relax with my grandchildren and enjoy my life.’”

The accident occurred on the western end of the reservoir, where two enormous concrete tanks are being constructed to store finished drinking water.

The project, which has disrupted access to the park and its popular walkway around the reservoir, is expected to be completed in 2022.

Back in 2009, the city was given permission by MDE and the U.S. Environmental Protection Agency to construct an ultraviolet disinfection plant near the reservoir to meet new federal “LT2” water quality standards.

Three years later, the Rawlings-Blake administration reversed course and decided to build underground water tanks, instead of the UV plant, based on a hunch by DPW’s Rudy Chow that the federal government would eventually require all drinking water reservoirs to be contained.

The decision more than tripled the price of the project from an estimated $40 million to the present-day $150 million (including costs not covered in the Oscar Renda contract).

The same change in direction led to the $137 million construction of water tanks that have obliterated once-wooded Hanlon Park in Ashburton. These tanks also are being built by Oscar Renda.

In 2018, the contractor’s  cofferdam at Druid Lake ran the risk of releasing viruses and bacteria into the region’s drinking water.

Started in 2017, the Druid Lake project has undergone some difficulties and delays.

Most notably, a cofferdam built by Oscar Renda brought impurities into the drinking water side of the reservoir. High sediment levels detected in field tests posed the risk that viruses, parasites and bacteria could be introduced in the region’s water supply.

For nearly six months, reservoir water was quarantined by MDE and closed off from the public water supply. 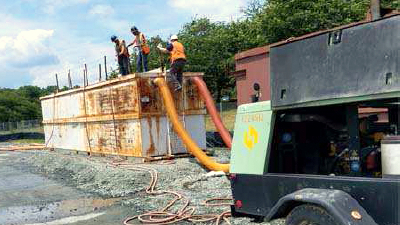 One of the tanks found to be illegally pumping high-chlorine water into the Jones Falls from the Druid Lake construction site. (MDE Compliance Report, July 17, 2018)

In July 2018, state inspectors caught the city and contractor dumping chlorinated water into the Jones Falls.

The discovery came a week after a DPW official said at a City Council hearing that all water released by the contractor was within permitted limits.

After The Brew questioned this assertion to state regulators, MDE conducted an inspection of the temporary pumping stations around Druid Lake.

The inspection found that every sample it took exceeded the permitted limit of 0.10 mg/L of chlorine.

The tainted water, which MDE said would not cause human injury but could damage aquatic life, was emptied into the Jones Falls via an old storm drain under the I-83 Expressway.

– To reach this reporter: reuttermark@yahoo.com