Amid disclosures about the magnitude of Baltimore’s failure to bill big-volume water users, some key figures are either keeping quiet or steering clear of specifics.

The response from Johns Hopkins Medicine, for instance, does not address the $4.2 million bill racked up at its Skip Viragh Outpatient Cancer Center, the biggest overdue bill the city identified late last year.

Asked about it, a spokeswoman said: the University has been working with the city after “identifying as many as 39 different water meters on both our Homewood and East Baltimore campuses that may have been billed incorrectly.”

But other high-profile customers red-flagged in an internal city review – reflecting millions of dollars of uncollected water charges described in a special report Friday in The Brew  – are speaking out.

They fault the city for not billing them properly.

“We believe and have notified the city that we have been underbilled for water,” Badmington told The Brew.

He was referring to the facility the chemical company has operated in Curtis Bay for more than a century, which the city determined was underbilled by $2 million.

No Response by Mayor

Mayor Bernard C. “Jack” Young has not commented on the underbilling scandal disclosed by The Brew.

Yesterday his office confirmed that an audit he ordered of commercial water billing will likely not be released until May.

Broad-brush comments about the audit made by the administration paint a picture of a laborious process underway since last October when it was discovered that the Ritz Carlton Residences at the Inner Harbor hadn’t paid a water bill since 2009.

Meanwhile, frustrated customers like Grace are discussing the billing problems in detail.

“The essence of your reporting is correct as it relates to Grace,” he said.

“Every time we call the city and say we don’t think this is enough, we get mixed messages back.” – W.R. Grace

He said that his company has been alerting the city to problems for years, including some bills they noticed were “significantly lower than our historic rates.”

“But every time we call the city and say we don’t think this is enough, we get mixed messages back,” he said. “Our interest in this is to pay the bills that we owe.”

The company has paid all of the various bills they have received, “but we don’t think it’s an accurate picture of our usage,” Badmington says.

“I can’t speak to what is going on within their department,” he said. “They have replaced our meter, and for a time that looked like it resolved the issue. I don’t think it has.”

The company says it has now paid in full – and that it was never to blame for the $220,000 unpaid balance.

“We were among a handful of companies that worked closely with the city to identify and rectify any billing and collection discrepancies due to circumstances outside of our control,” Brian Treacy, president of Sagamore Spirit, said.

He did not elaborate on who or what was to blame for the delinquent bill.

“By mid-February, once all facts were resolved, our distillery paid its balance of $131,256.85 in full,” Treacy said.

He  added that “under the assumption that metering and billing protocols remain accurate and timely, our account will remain current and under any circumstances, our commitment to Baltimore remains unwavering.”

We worked closely with the city to rectify “any billing and collection discrepancies due to circumstances outside of our control.” – Sagamore Spirit

No answer back so far from the Maryland State Reception, Diagnostic and Classification Center ($1.1 million), Kevin Plank’s Sagamore Pendry Hotel in Fells Point ($223,000).

The manager of the Banner Hill Apartments at 600 South Charles Street declined to comment yesterday.

The Brew reported that the 384-unit complex has not received a bill since it opened in 2016 and has an outstanding balance of $263,000.

According to Kim Hoppe, senior director of public relations for Hopkins Medicine, the University notified the mayors office of issues in some water accounts this past October.

“The issues included past water leaks, closed accounts and questions about billed amounts,” Hoppe said, adding “we hope to have the billing issues resoved an paid by the end of March.

“This is outrageous, and it’s not new stuff. This came up with Sparrows Point in 2012,” said Stokes, who is running for City Council president..

Back in 2012, The Brew disclosed that the now-demolished mill owed the city $5.4 million for water usage, a number that later ballooned to $8 million and was ultimately negotiated back down to $5.5 million in approved claims.

Why wasn’t something done then by the Council about the problems identified, as numerous other overdue accounts surfaced?

Stokes, who left the Council in 2016, complains that an audit bill he wanted to pass was weakened.

Regarding the latest expose of chronic water billing problems, Stokes said, “I don’t know why the mayor and City Council aren’t publicly taking the Department of Public Works to task and saying, ‘Within 48 hours, collect this bill!’”

“We could say we’ll turn their water off. How about that?” he fumed.

”We could say we’ll turn their water off. How about that?”  — Carl Stokes.

Stokes also highlighted the fact that the latest billing lapses come in spite of the $22 million the city has spent to fly personnel from Atlanta-based Itineris N.A. to support the new wireless “smart” water meter system.

“There are too many consultants coming in, taking people to dinner and out golfing,” he complained.

Mayoral candidate Thiru Vignarajah said the Young administration is “hiding the results” and demanded the release of the city’s internal billing review immediately.

“This embarrassment has unfolded on the watch of city politicians who refuse to accept responsibility and instead are deflecting blame and hiding the results of an audit that would shock Baltimore and embarrass those leaders,” he said.

“Our elected officials must be held accountable for this,” said Mary Miller, a former T. Rowe Price executive and Obama administration official who is running for the city’s top job in the April primary.

“The mounting evidence that large commercial water users owe millions for unbilled and unpaid water usage, while many residential customers struggle to pay their bills, only highlights the broken, unfair and inequitable management practices in the city,” Miller said.

If elected, she said she plans on “fixing these serious problems, restoring confidence in city government and making sure that everyone in Baltimore is treated equitably and fairly.”

“This is the result of an ineffective, corruption-prone government that operates in silos and penalizes the taxpaying, working-class residents of Baltimore, while big businesses get ‘zeroed out,’” Smith said.

He proposes hiring a professional administrative officer, who would take over day-to-day city operations that are now in the hands of the mayor.

City Council President Brandon Scott, meanwhile, has been pointing to the hearings he has scheduled Wednesday to address the water bill revelations.

Reacting to The Brew’s revelation of tens of millions of dollars worth of underbillings, he called it “embarrassing” and said it reflects the “ineptitude” of former DPW director Rudy Chow. 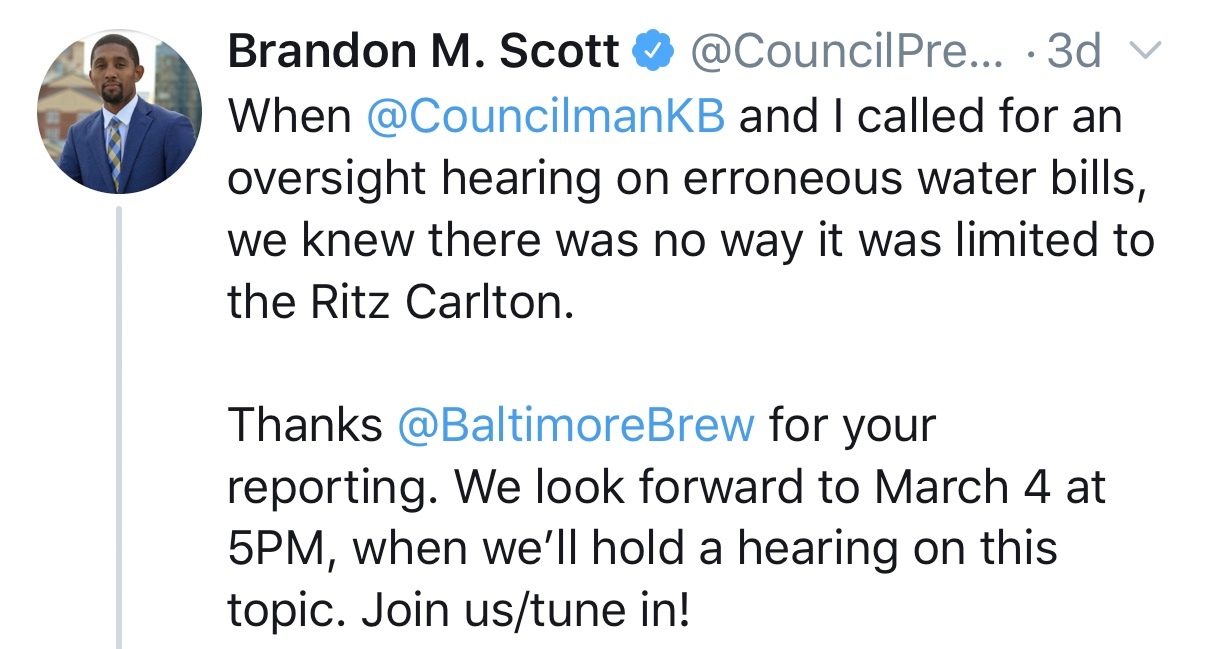 Among the questions he said in a news release he plans to ask:

• How much money does the administration estimate the City has lost due to its failure to send out water bills to all customers?

• How many commercial customers have self-reported not receiving a water bill?

Would they be asking about reports from sources that DPW staffers, under pressure to suppress bad news before the election, are simply “zeroing out” large, problematic bills?

“We will be asking about all of that,” Scott told The Brew.

Dixon: Not on my Watch

Candidate Sheila Dixon said she was flabbergasted by the reports of large-scale underbilling of commercial water customers.

“I was highly upset. I was just floored,” she said. “That’s absurd. That’s a lot of money!”

“As much as we need money and as much as we raise water bills on a yearly basis, and then we’re not collecting?” she continued, suggesting that if the city had billed big customers properly, water rate increases could have been limited to about 3% or 4% a year rather than 10%.

Dixon was asked if she shares responsibility for the problem, since she was mayor from 2007 until 2010.

No, she answered, pointing the finger at her successor, Stephanie Rawlings-Blake.

Dixon said the shift to the wireless water metering system coincides with the billing errors. That transition occurred in 2016, or six years after she left office.