Lance Lucas was 17 years old when, just months away from graduating Woodlawn High School, he was caught red-handed in a lucrative scheme he had devised to make duplicate tickets to movies, parties and special events.

As he liked to tell the story, he was expelled from school and narrowly escaped juvenile detention after an Army recruiter cried in front of a judge.

He pleaded guilty in U.S. District Court in Baltimore to paying $42,500 in bribes to convicted Maryland delegate Cheryl D. Glenn.

Sitting in his Porsche with Glenn last year, Lucas reassured the “nervous” 45th District delegate about the crime they were committing by reminding her of the milieu he came up in.

”I’m from Baltimore for real, for real Baltimore,” he said. “This is the least illegal thing I’ve ever done.”

“I’m from Baltimore for real, for real Baltimore . . . This is the least illegal thing that I’ve ever done”  – Lance Lucas.

He then added, “This is like patty-cake compared to the shit in Baltimore City.”

The conversation, apparently caught on tape, was part of the narrative released by federal prosecutors as Lucas acknowledged making 11 payments to Glenn to help an unidentified company obtain a medical marijuana license and to promote a “Cyber Warriors Diversity Program.”

In January, Glenn pleaded guilty to bribery for accepting $33,750 in return for voting to increase the number of medical marijuana licenses, among other favors.

The bribery detailed in Lucas’ plea today – involving payments made to Glenn in 2018 and 2019 – also involves a person seeking a medical marijuana license.

At one point, according to prosecutors, Glenn arranged for Lucas and representatives from the company to meet with the chairman of the state’s cannabis commission.

At another point, the plea agreement says, he promised Glenn he would be “007 about this shit.”

Gregarious and remarkably fast talking, the 44-year-old Lucas had gained prominence in Baltimore as a tech entrepreneur, serving at one point as the president of the Greater Baltimore Black Chamber of Commerce.

In 2013, he grabbed national attention after a Brew story about his “Stop Shooting, Start Coding” laptops for guns event, undertaken in partnership with the Baltimore Police Department and lauded by Mayor Stephanie Rawlings-Blake.

Gun rights advocates slammed him and others said the event had little practical effect, but Lucas was proud to announce that more than 50 guns were collected. 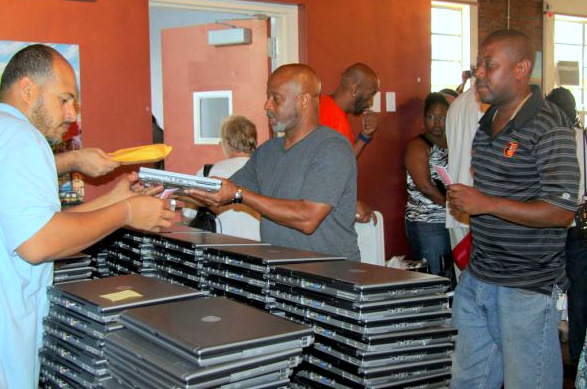 After handing over firearms to police at Lucas’ Laptops for Guns event, people line up for remodeled Dell laptops. (Fern Shen)

He attracted even more attention – and government funding – as the CEO of the non-profit Digit All Systems, formed to promote technology education for city youth.

“Lucas has a vision for Baltimore’s school system that he believes would turn it into a magnet to draw people and investment back into the city,” Ars Tecnica’s Sean Gallagher wrote about Lucas in a lengthy article.

It described how Lucas had given away over 3,000 refurbished laptops through city schools and other organizations, and set up computing labs in city housing projects as part of an effort to bridge the “digital divide.”

It noted also that Lucas was at odds with the current thinking on tech ed, emphasizing the importance of certification programs by Microsoft and Cisco, which he said were better suited to city students.

“I always say complexity is idiocy, and simplicity is genius,” Lucas told Ars, boasting that he had “a three-page document that can certify you in Word today.” 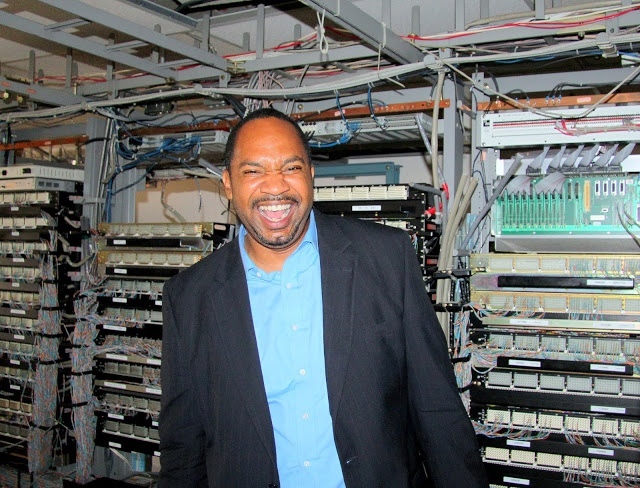 Lucas grew up in challenging circumstances in Baltimore’s Liberty Heights neighborhood, he told Technical.ly Baltimore’s Andrew Zaleskie in 2012, noting that his parents separated when he was eight years old.

“I was emotionally disturbed, [my father] living it up and us suffering,” Lucas told the website. His father’s abuse of drugs and other issues “caused me to act out.”

And act out he did, “running with a crew on Park Heights Avenue near Pimlico Race Course. . . a rage growing inside him for the life he felt cheated out of,” Zaleskie wrote. “Although Lucas says he never sold hard drugs himself, he did lose interest in school and focused instead on making money.”

“I wasn’t a bad kid. I was just the one who slipped through the cracks,” he told his interviewer.

After avoiding juvenile detention for his duplicate ticket scheme, Lucas joined the Army. Returning to Baltimore, he found himself working long hours at a fast-food job and taking classes at Coppin State University.

It was while living with an aunt that he caught sight of a brightly-colored Macintosh with speakers. Soon he was hooked on a new money-making venture: computer instruction.

Since then, at his Court Square Building office a block from City Hall, Lucas has run not only the non-profit Digit All Systems, but Locas Technology, a technical support and consulting firm.

Lucas could talk with rapid-fire passion for hours about tech’s potential to rescue his fellow Baltimoreans.

Speaking with Zaleskie, he recalled his emotions upon seeing a formerly incarcerated and drug-addicted man taking his computer certification class and being, for a month at least, clean.