Over a three-year period, Pratt voted 30 times for “contracts, grants and vendor prequalification amounts involving organizations and individuals from which she self-identified as needing to abstain from,” noted the report released by the Office of the Inspector General today.

The 123-page report follows up on a February report in which the OIG found a clear conflict of interest in Pratt’s 2017 vote to approve the sale of 15 city-owned lots for a total of $15 to her church, Bethel AME.

That investigation led to the discovery of a list maintained by her staff of scores of entities – from well-known foundations like Associated Black Charities (ABC) to obscure electrical contractors and waste recyclers – on whose votes Pratt was to recuse herself.

Pratt told the OIG she considers her abstentions list to consist of “anyone she has personally performed work for past or present, anyone who has received tax work from her business, Joan M. Pratt, CPA & Associates, and any trustee position held within an organization.”

The veteran comptroller, who has not yet provided a statement to The Brew, had been asked by the OIG to respond to its findings by March 10.

Pratt asked for an additional two weeks to March 25, according to Cumming’s report. The OIG then asked for a response by yesterday, March 18.

Yesterday Cumming’s office received a request from Pratt’s attorney, William Martin, asking for another extension, saying “the COVID-19 pandemic has raised unexpected challenges” and noticing that his D.C. office is currently closed.

Focusing on the period between Dec. 7, 2016 and October 30, 2019, the OIG reviewed Board of Estimates agendas, minutes and videos, and checked them against the corresponding abstentions lists, noting that they changed from week to week.

The investigators found votes by Pratt on numerous agenda items for entities that appeared on the list, including:

•  A December 14, 2016 vote in favor of awarding $966,000 to Chesapeake Parking Associates as the prime contractor for two city-owned parking garages.

• Two votes in 2017 in favor of pre-qualifying one company, American Contracting & Environmental Services, for a total of $32.7 million in city contract work.

• Then a vote for a $2.9 million extra work order (EWO) for the same company, American Contracting. In 2018, Pratt voted for a “transfer of unused funds” to cover that extra work order.

• Another vote approved $55,000 in federal and private grants to the House of Restoration, a for-profit child care center.

• The OIG found a number of irregularities in the votes involving Horton Mechanical Contractors and Banks Contracting. Both companies appeared on Pratt’s abstentions list, but were later removed.

In addition to votes taken suggesting specific conflicts of interest, the abstentions lists – or “LOAs” as the OIG refers to them – are themselves are striking.

The practice goes back years, and the six-term incumbent’s list is by far the longest of any member of the Board of Estimates.

Pratt, on the other hand, lists 117 entities that could present conflicts, including some high-profile businesses like Allen & Son Moving and Storage.

The politically-connected West Baltimore company moved Mayor Pugh into her Ashburton house at a discount in 2017, The Brew has reported.

Also on the list is ABC or Associated Black Charities, a foundation which purchased some of Pugh’s Healthy Holly books and has been criticized for delays in the release of funds for the Children & Youth Fund it manages for the city.

There are little-known LLCs, daycare centers, construction companies, a welder and a Westport auto body shop on Pratt’s abstentions list.

Other Brew Reporting on Pratt:

Pratt’s Response to the Media 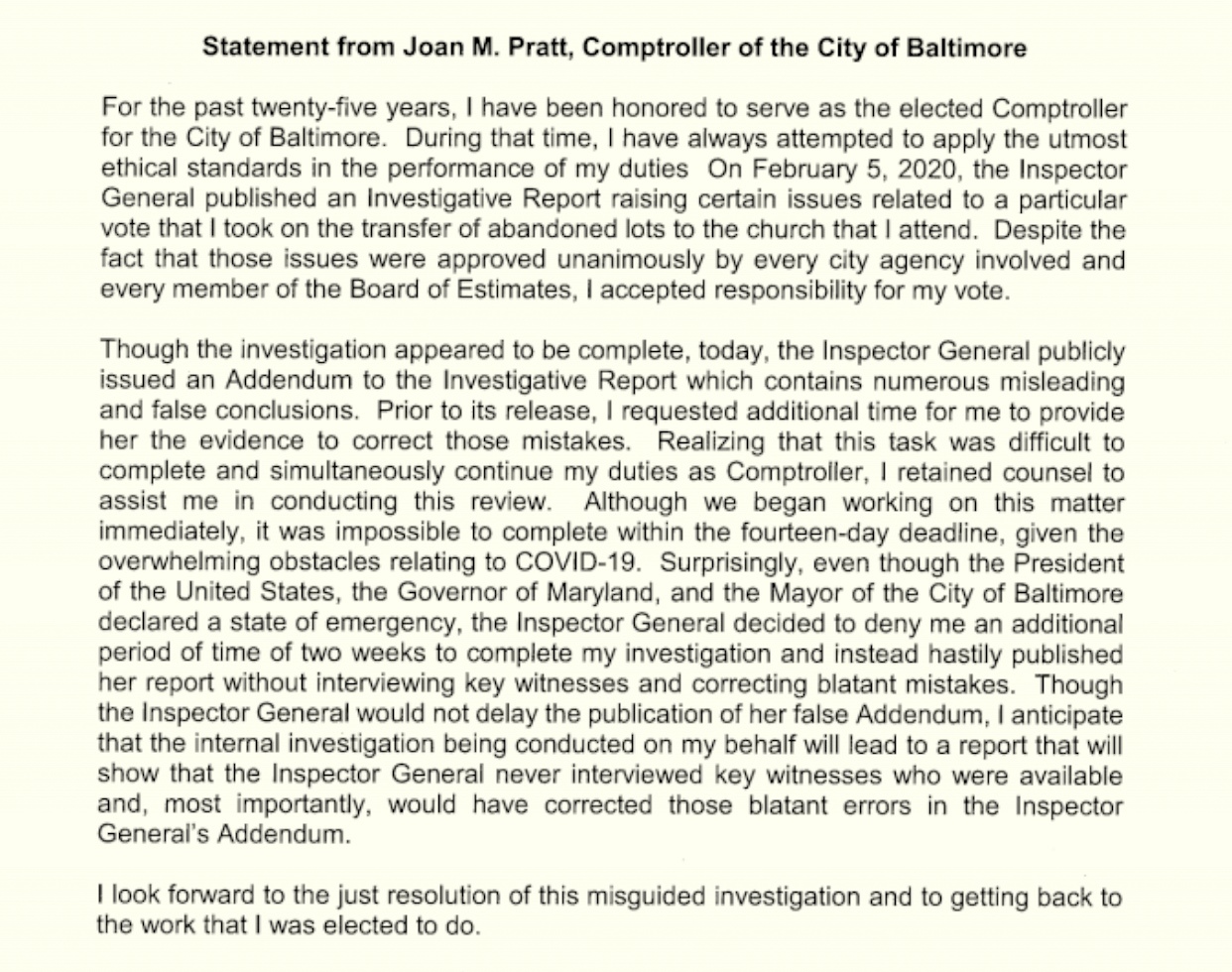