It was an unnerving sight for a city that last saw Maryland National Guard convoys during the 2015 protests, rioting and curfew following the death in police custody of Freddie Gray.

Baltimore was already on edge amid the government-ordered shut-down of much of the city, aimed at slowing the spread of the new coronavirus.

Now  Guardsmen were rolling in again, spawning speculation they were here to enforce “sheltering in place” or even “martial law.”

Finally, at 6:31 p.m., came a press release from Mayor Bernard C. “Jack” Young and a tweet providing this explanation:

“My administration requested that the National Guard deploy in Baltimore to provide humanitarian assistance in partnership with our city agencies to slow the spread of #COVID-19.”

A few minutes later, the National Guard tweeted a message meant to stamp out the speculation and panic. 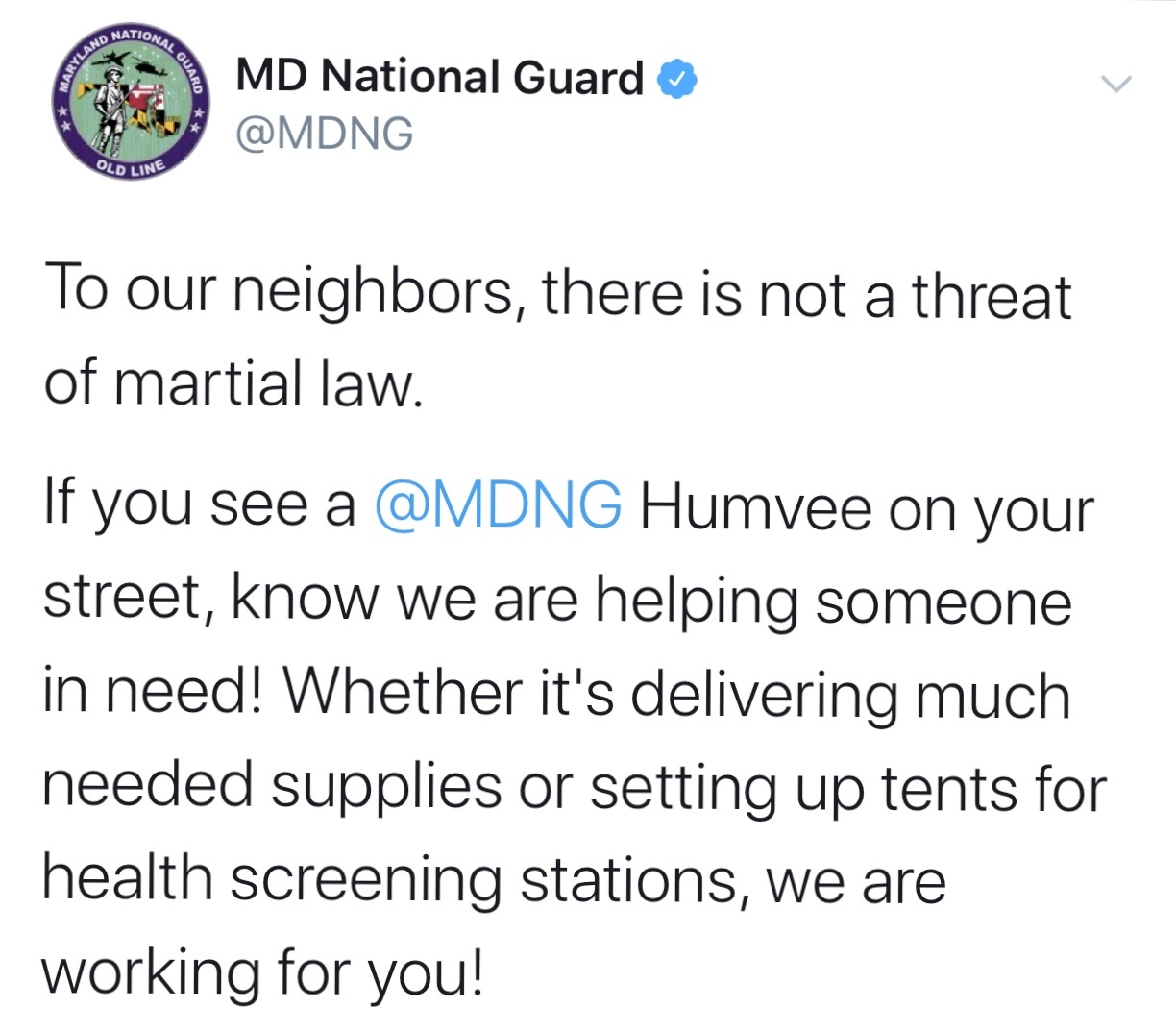 The Governor’s office confirmed Friday that more than 2,000 members were being activated across the state to assist with patient transport, conduct temperature screenings at state facilities and to help to set up triage tents at hospitals and a pilot assessment location at FedEx Field in Prince George’s County.

“I was notified by admin right before 6 p.m. after asking questions based on citizen inquiry,” Scott tweeted after being asked about it.

Hogan’s order comes as the number of confirmed cases of COVID-19 in Maryland continues to rise.

Officials yesterday reported an additional 41 confirmed cases of coronavirus in the state, for a total of at least 190, as well as a third death.

The global pandemic has resulted in more than 10,000 deaths worldwide and public health experts warn that, with limited availability of testing, isolation and social distancing is the only way to slow the virus’ spread.

Young’s press release said he asked the Guard to come here “to support meal distribution at school sites throughout Baltimore, feeding children through the program begun earlier this week” and to “aid in planning and logistical support for the city’s hospitals and medical teams.”

But citizens had spotted them in town days earlier.

The Brew received some reports that the Guard had been seen on Thursday at Penn-North, the epicenter of the 2015 Uprising.

On Monday morning, they were seen by bicyclist Kate Drabinski, who blogs about her rides.

“We watched as tan military vehicles poured off I-95, headed to the stadiums,” Drabinski, a lecturer at University of Maryland Baltimore County, wrote.” The last time I saw them was April 2015. It wasn’t a good feeling.”

Commenters like @bmoreProjects chided Young for failing to anticipate the triggering effect of armed soldiers in town, given recent events.

“Mayor Young requested NG to enter the city w/o notice, preparation or consultation with @CouncilPresBMS let alone all the frightened and damaged pple.”

Gray’s 2015 death in police custody spawned days of protests and, on April 27, burning cars, burning buildings, hundreds of arrests, hundreds of damaged businesses, a massive armed police presence and a six-day curfew. More than 4,000 National Guard soldiers were sent to the city.

“Keep people in the loop”

Howard Park’s Chris Ervin, a 5th District City Council candidate, said on Facebook that citizens would have understood and accepted the Guard’s deployment if city or state leaders had informed them about it earlier.

“When you get AHEAD of information and keep people in the loop, they will be fully prepared to move in an orderly fashion when you need them to,” he wrote.

“When you get AHEAD of information and keep people in the loop, they will be fully prepared to move in an orderly fashion when you need them to”  – Chris Ervin.

Why hadn’t Young warned the public earlier? Was the mayor not aware that the Guard had possibly been in West Baltimore Thursday and definitely been down by the stadium on Monday?

“The mayor is thankful to have a partnership with the State that will assist our efforts to provide meals to thousands of children and older adults.”