A resident supervisor at the Housing Authority of Baltimore City stopped grassroots organizers from giving free food to residents of Douglass Homes, many of whom are cooped up in their apartments and some unemployed as a result of the coronavius pandemic.

After community members and the Franciscan Center, organized by longtime resident Annie Chambers, brought groceries to the East Baltimore public housing development on Monday, the HABC official said they could not continue distributing the food from Chambers’s front porch.

Chambers said Cheryl Harrison-Jackson, interim executive director of HABC’s Resident Advisory Board, swore at her and threatened to evict her.

She then called the police on Chambers and the volunteers involved in distributing the food, but the police never came.

“There’s nothing in my lease that says you can’t give your neighbor food,” Chambers told The Brew. “I have distributed clothes. We help people with they rent. I help people with all kinds of problems here in Douglass.”

“There’s nothing in my lease that says you can’t give your neighbor food.”  – Annie Chambers.

Residents did end up receiving the food. Organizers set up their table on the Orleans Street sidewalk, just outside of the Housing Authority’s territory.

Chambers said everyone at Douglass Homes, apart from those who work at Johns Hopkins Medical Center, have lost their jobs in recent weeks, making the need for food more urgent. She said the local grocery store has been picked over, and the prices have shot up.

“Today people came to me for soap, for toilet paper,” Chambers said. “We are fighting for survival in Douglass, to live.” 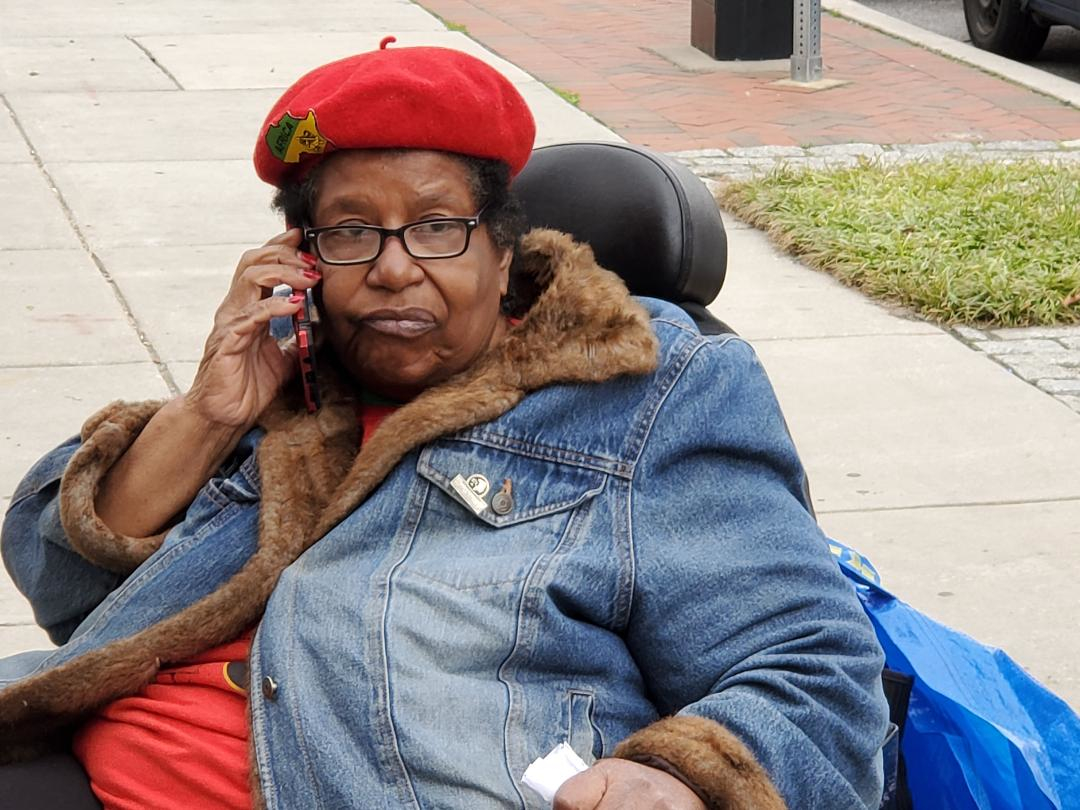 Annie Chambers says she was cursed at and threatened when she tried to distribute free food to fellow public housing residents. (Kevin Zeese)

HABC spokeswoman Ingrid Antonio stated in an email that food is required to pass health department and CDC (Centers for Disease Control and Prevention) safety and health protocols in order to be distributed on HABC property.

“We encourage all individuals and organizations who have the ability to provide food to work within the city departments that are safely coordinating food distribution services,” she wrote.

“We need to ensure that all precautionary measures are being taken throughout the entire process”  – HABC’s CEO Janet Abrahams.

Today the Housing Authority issued a press release quoting CEO Janet Abrahams saying that “as we seek every opportunity available to us right now to provide food services, we need to ensure that all precautionary measures are being taken throughout the entire process.”

Abrahams said HABC will continue to provide meals to families with children under its Mobile Meal Distribution program and will double the amount of USDA food in the food boxes delivered to low-income seniors under its Commodity Supplemental Food Program.

The next delivery to seniors at Douglass Homes is scheduled for April 10.

Other organizers seeking to feed the poor say they have gotten little help from the city.

J.C. Faulk, whose informal network has distributed tens of thousands of pounds of food in the past two weeks, said he could have a much greater impact with more help from the city.

“There’s a lot of red tape, and they’re following procedure while people are starving.”

Faulk, affiliated with the diversity advocacy group Circles of Voices, has two main critiques of the city’s food efforts.

The first is that they should collaborate more with grassroots efforts like his because he believes they could feed more people together than apart.

“There’s a lot of red tape, and they’re following procedure while people are starving”  – J.C. Faulk.

His second criticism is that the city isn’t adequately safeguarding against spread of the virus and is exposing residents to potential contamination inside schools and rec centers where food is distributed.

Children and adults are now entering and leaving the buildings and touching the same doors. “They’re forcing little black kids to go out into the world to get a sandwich,” he said. 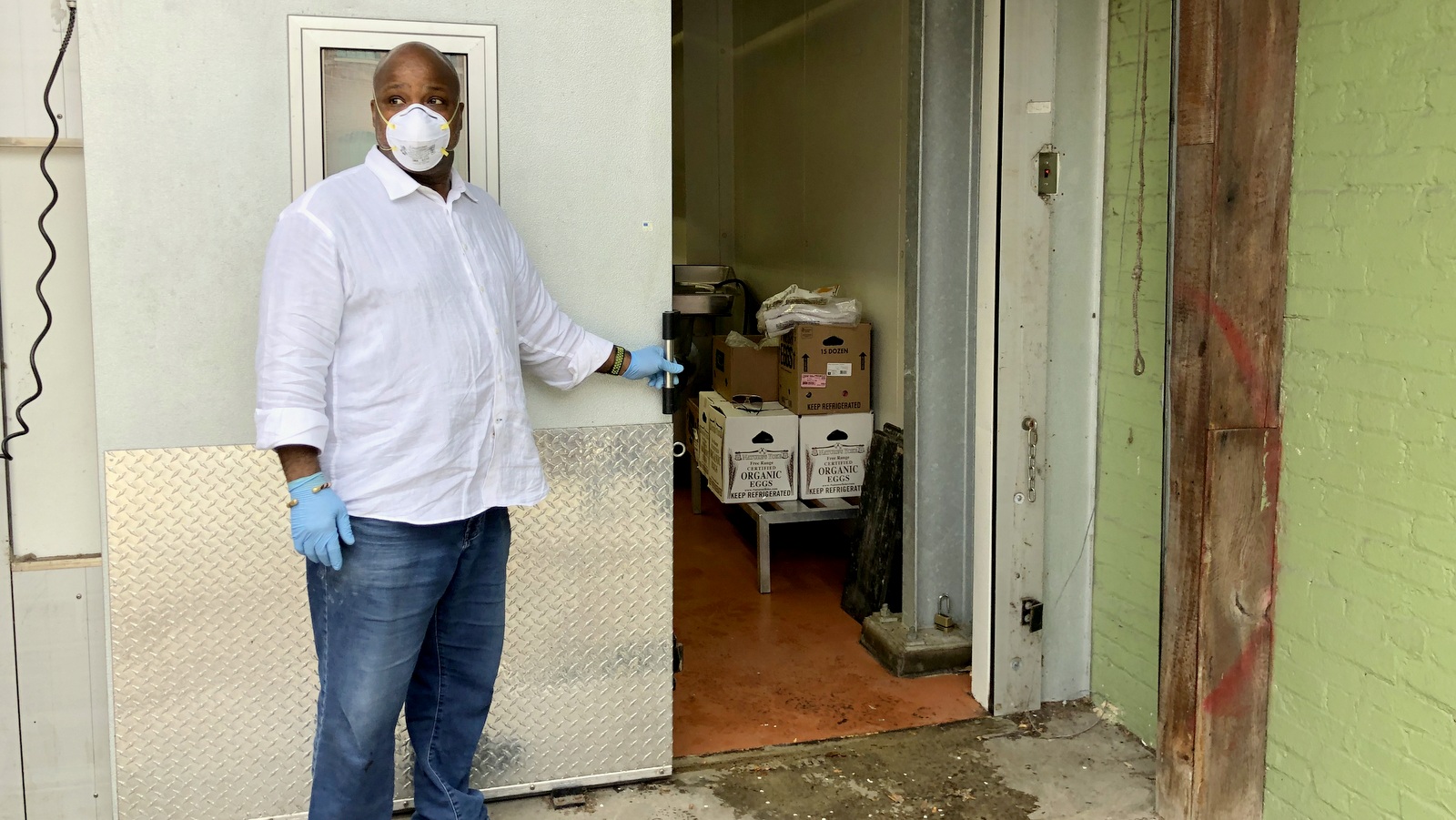 J.C. Faulk shows some of the donated food being stored at the former Parts & Labor restaurant as volunteers (below) wipe down its metal shelves in preparation for food distribution. (Ian Round) 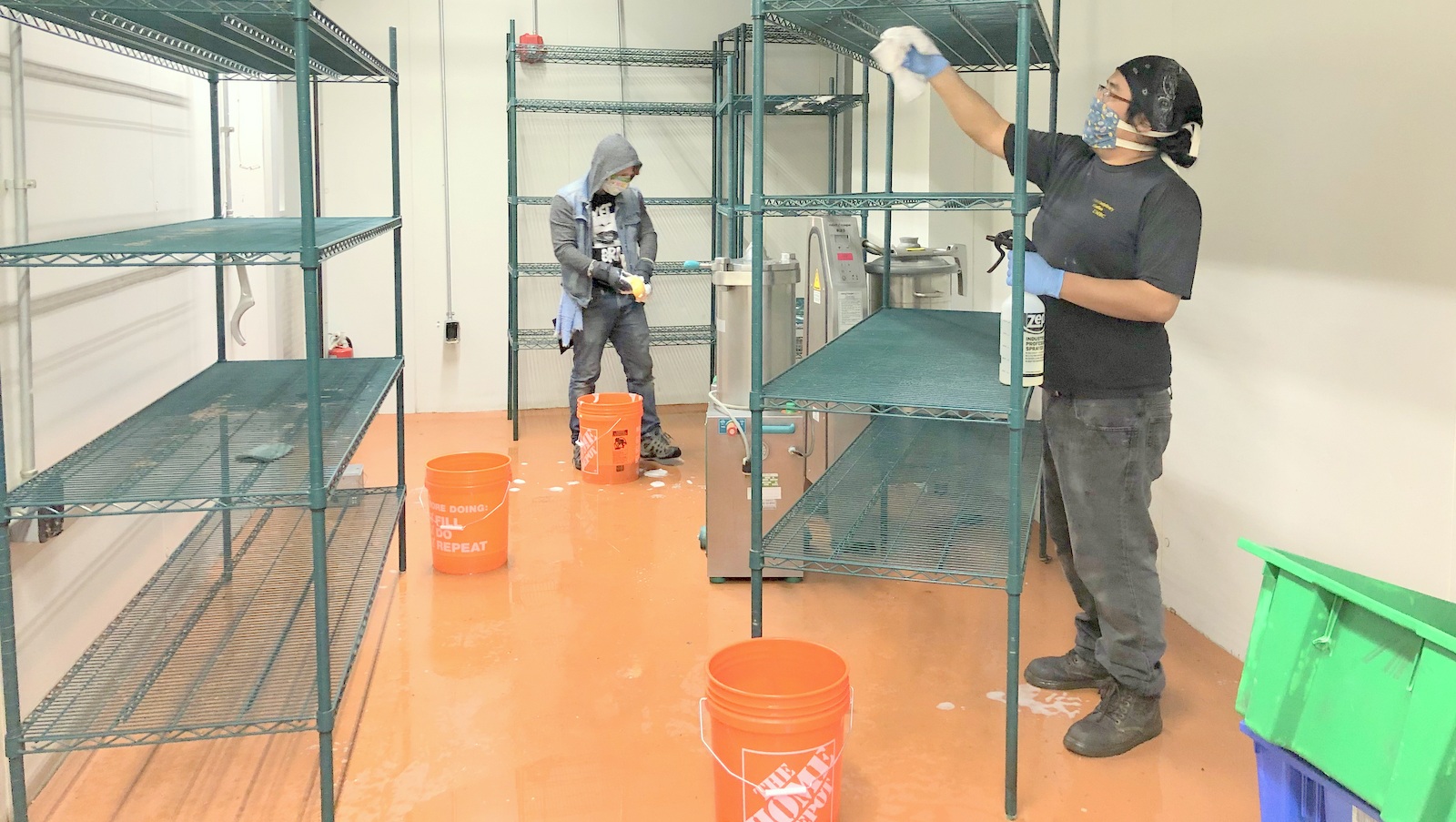 Faulk is part of a food relief collaboration called “An End to Ignorance.”

The group offers curbside pickup, delivers to several locations and is trying to figure out how to deliver directly to individuals, which he argues better complies with social distancing guidance.

Beth Benner, who runs the Women’s Housing Coalition that receives hundreds of meals every week from Faulk’s group, said the city isn’t minimizing residents’ exposure at its distribution centers.

“I’m trying to keep my ladies out of those lines,” she said. “That means there’s less times that people need to leave their homes.”

Faulk’s operation has joined forces with other groups – including Food Not Bombs, Food Rescue Baltimore, So What Else and 4 My City – to address the dramatic increase in hunger.

They secured free space at the former Parts & Labor restaurant on North Howard Street in Remington. Most of their food comes from restaurants and hotels that bought food before public gatherings were limited and restaurants went to take-out only.

Faulk said the grassroots groups have distributed 30,000 pounds of groceries during the two weeks they’ve worked together, and their goal is to triple that output.

With some help from the city, he said they could move four or five times the amount they do now.

Seeking gas money for his volunteers, Faulk said he has approached his City Council representative and various city agencies and officials to no avail.

There were exceptions, he said, citing Abby Cocke of the Baltimore Office of Sustainability, and John Brothers, president of the T. Rowe Price Foundation.

He said they’ve been energetic, responsive and helpful silo-connectors and that Brothers has been rallying the corporate world for him.

Other private sources have been helpful as well, he said, reporting that he got some funding from United Way of Maryland recently and is working on a partnership with the Maryland Food Bank.

Benner said that job loss has hit her clients, with many layoffs among security guards and casino employees.

“Their resources are low, their cleaning and other needs are higher, and their mental health needs are increasing dramatically,” she said.

“J.C. came to me way before the city did,” she said. “This is a huge effort that he has pulled off really fast.”