As public officials freeze the economy in an effort to stop the spread of coronavirus, Americans have filed a record number of unemployment claims.

More than 84,000 Marylanders applied for unemployment insurance during the week ending March 28, according to data from the U.S. Department of Labor.

The total is almost double the previous week’s total of 42,334.

Baltimore County topped the list of Maryland jurisdictions with more than 13,000 applications.

In Baltimore City, 8,685 applied for unemployment. That compared to 5,392 who applied the week before. 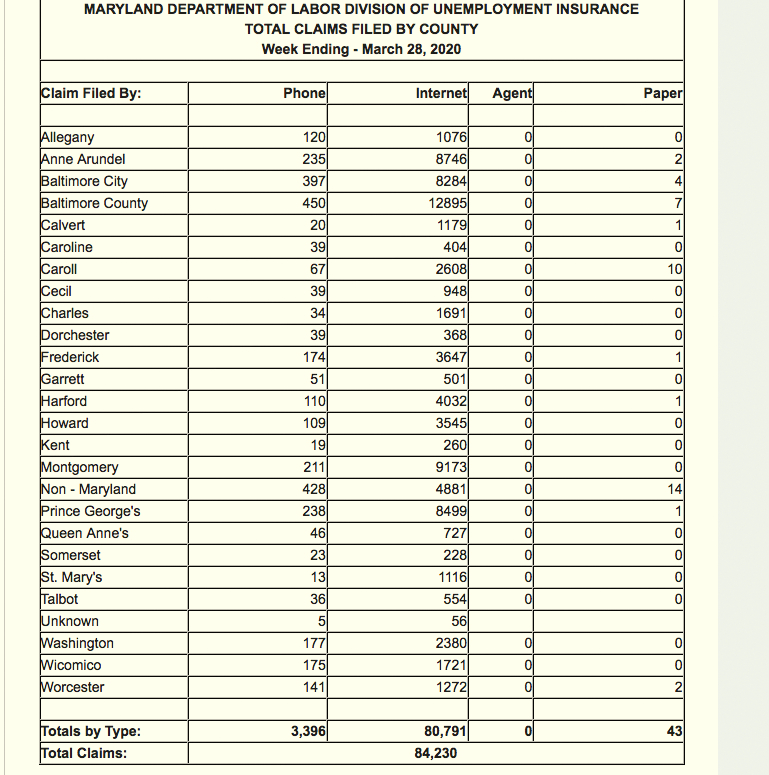 The volume of new applications is so high that the Maryland Department of Labor has asked residents to stagger their applications based on their last names.

People with last names beginning with the letters A through F are asked to apply on Monday, letters G through N on Tuesday, and letters O through Z on Wednesday.

Maryland is following a nationwide pattern.

During the Great Recession of 2008-2009, the greatest number of unemployment claims nationwide in a single week was about 665,000, according to CNN.

Running Out of Money

Maryland Labor Secretary Tiffany Robinson yesterday warned a legislative workshop that the unemployment trust fund may become depleted if the number of applications continues at its recent pace.

She said the state fund held $1.17 billion as of March 31. The federal government has somewhat eased the cost burden by agreeing to pay the first week of benefits for claims filed during the balance of this year.

How to apply for unemployment insurance in Maryland: