Criticizing Mayor Bernard C. “Jack” Young’s plan to move 150 homeless people to motels as inadequate, advocates say conditions for those who remain at city shelters put them at high risk for COVID-19 transmission.

“They’re still all piled up in there. The way they’re sleeping, the way they’re eating and with the activities in the day room. There’s no way to keep a six-foot distance. It’s impossible,” said Mark Council, describing the close quarters at the city’s Weinberg Housing and Resource Center.

Currently a homeless person who has previously lived at the facility, Council and other members of the Fair Development Roundtable say Young needs to shut down all city shelters and quickly move people to safer spaces.

“You have bunk beds that are right across from each other, no more than two feet apart,” Council said, speaking by phone with The Brew. 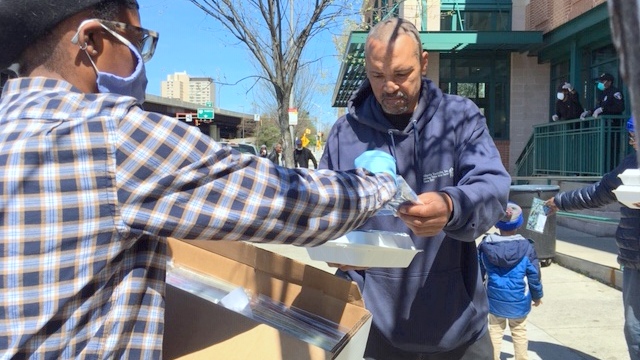 Volunteers from Housing Our Neighbors hand out masks outside of Our Daily Bread located across Fallsway from the Weinberg shelter. (Todd Cherkis)

He was describing conditions for the 175 men, 75 women and 25 people in the convalescent sleeping area at the Weinberg shelter. He said bathroom and shower facilities are shared. (Council said he receives services at the shelter and leads a weekly program there for residents.)

“We are glad to see the mayor’s office is beginning to take a step in the right direction providing hotel rooms for some shelter residents,” Rachel Kutler said, reading from the Roundtable’s statement.

“But the mayor must step up and commit to protecting all homeless in shelters and encampments,” she said. “All are in need of safe housing.”

As COVID-19 cases have multiplied, Mayor Young has been under intense pressure to take action to prevent the virus’ spread among the city’s homeless population.

The fear is that shelters and homeless encampments could become hotbeds for the disease because of the inhabitants’ age, medical conditions and inability to isolate themselves to prevent transmission.

Young announced on Friday that his Office of Homeless Services “will begin to relocate vulnerable homeless residents over the age of 62 from the city’s three emergency shelters to motels.”

Altogether, 150 “vulnerable, but healthy individuals” from the shelters will be moved.

“This effort allows our neighbors who are experiencing homelessness to isolate safely, while allowing our team to help monitor their health,” a press release from his office said.

On March 20, the city began transporting and supporting homeless individuals who were tested for COVID-19 and awaiting test results to a motel for isolation, officials said.

Also housed at this “isolation location” were individuals who tested positive “but did not have a permanent location to go back to,” Jerianne Anthony, director of the Mayor’s Office of Homeless Services.

Since that time, she said, 56 individuals who were homeless or living in congregate settings have been served in this undisclosed location.

“Waiting will be catastrophic”

But homeless advocates, who have sent an open letter to the mayor signed by more than 900 people, say the inherent danger of congregate living requires all city shelters to be closed.

“If we wait, the consequences will be catastrophic,” said Roundtable member Terrell Askew, pointing out the high rate of infection already reported among homeless people in other cities. 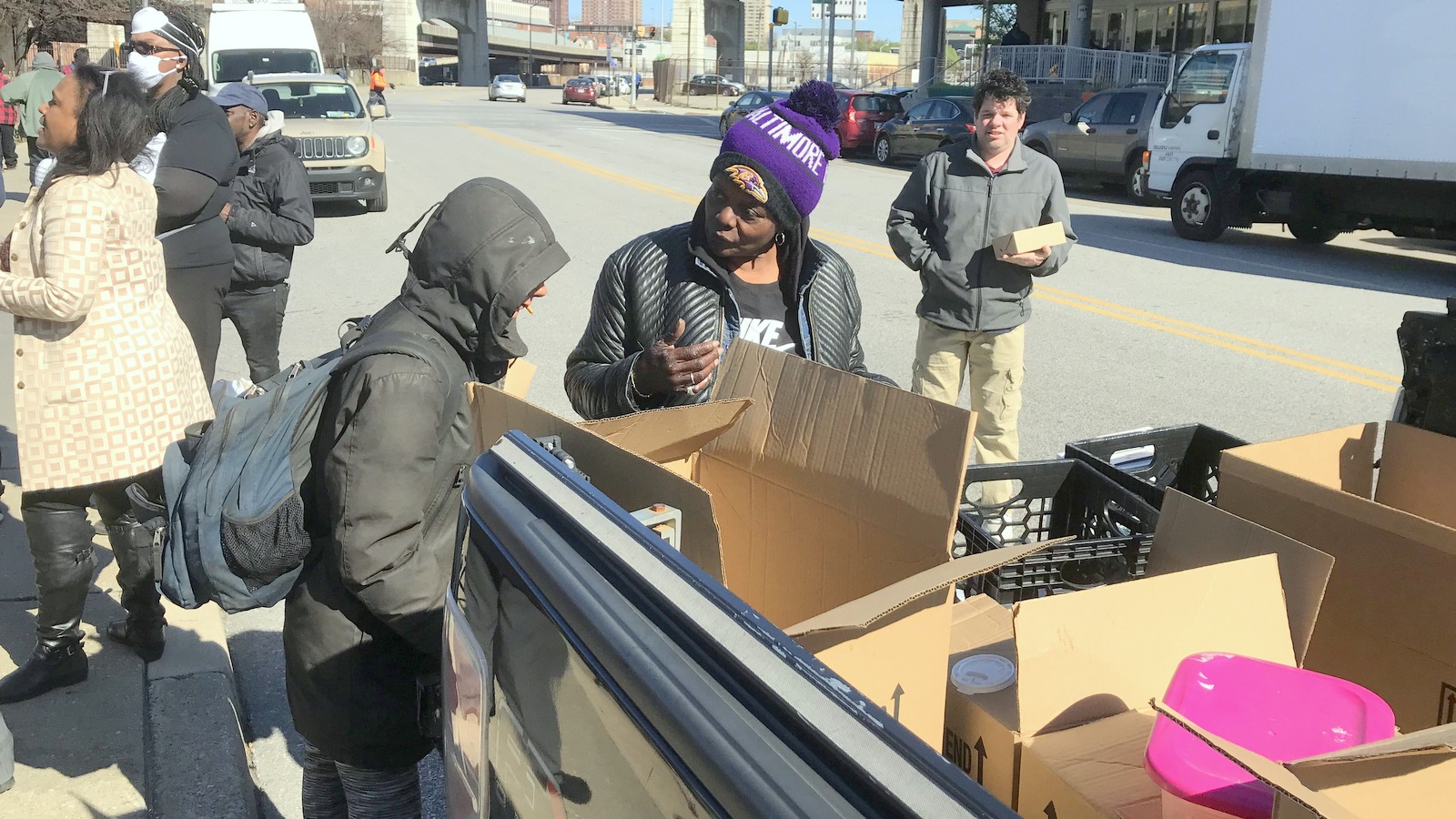 Ralanda Malala, who lives outside on the Fallsway, joined others at a food giveaway there. (Louis Krauss)

Spokesman Davis said the mayor “considers getting individuals experiencing homelessness to separate housing to stop the spread of the virus a top priority.”

He said the city shares the advocates’ goal of housing all vulnerable individuals, but is finding it difficult to do so.

“It’s not just a matter of getting motel space. It’s getting support staff to supervise people in these spaces. We are working on this 24/7,” he said.

Asked how many people in shelters or elsewhere need housing, Davis replied, “I don’t think you want to focus on the numbers.”

Kutler said their group’s estimate is that a total of 750 beds are needed.

That number is based on an estimate of the city’s homeless encampments population, plus the 603 bed capacity at the city’s shelters: Weinberg, Pinderhughes, Monument Street and Sarah’s Hope.

UPDATE: The city estimates there are 1,180 homeless individuals to potentially be housed, including 800 who are in shelters, according to Deputy Chief of Staff Sheryl Goldstein.

Young’s announcement noted that individuals at the Monument Street shelter are being relocated “to a larger and more suitable location to allow for social distancing.”

Meanwhile, the level of fear about the virus – which has already led to at least nine deaths in Baltimore – is palpable on the Fallsway where Our Daily Bread and Health Care for the Homeless are located, along with the Weinberg shelter.

Kutler notes that 130 masks she and other members of Housing Our Neighbors distributed today outside of Our Daily Bread were snapped up within minutes.

“We had so many people – people on the street and staff members – pouring out of the building, asking us for the masks, saying they really need them,” Kutler said. (The masks were made and donated by the Baltimore Fab Lab.)

“The city hasn’t given us anything. Everybody outside is worried about it.”  – Anthony Hall.

Last week, wearing two sanitation masks as she handed out coffee and lunch from a pickup truck parked on the Fallsway, Christina Flowers complained that Baltimore is failing its homeless citizens at a moment of crisis.

“The city needs to deal with overcrowded shelters where there’s no way for them to maintain social distancing, and deal with individuals who are unsheltered on the street without tents or any way to protect themselves,” said Flowers, founder of Belvedere Real Care Providers Network.

Farther down Fallsway, several people who typically sleep on “the porch” outside of Health Care for the Homeless said they are scared for their lives.

“We don’t have no home, it’s out on the street,” said 36-year-old Anthony Hall, who said he been sleeping at that spot since 2010.

Hall says he knows of two people testing positive for the virus before they were taken away.

“The city hasn’t given us anything,” Hall said. “Everybody outside is worried about it.”