When Emma Lucaci lost her job in mid-March, it was a blow. But trying to file for unemployment in Maryland over the phone was like taking a daily pounding.

“I tried calling them for weeks,” Lucaci said. “I thought ‘I can’t just sit on the phone and lose my mind for 10 hours per day.’”

Having worked out of state and held more than three jobs during the past 18 months, the Baltimore resident could not file her claim online and, instead, had to reach out to the Maryland Department of Labor over the phone.

And that meant calling dozens of times a day, getting a busy signal and growing increasingly afraid that she would never get through or would miss a critical deadline.

It’s a struggle shared widely across the U.S. – which saw more than 10 million jobless claims in March – and in Maryland, where officials disclosed today that more claims were filed last month than in all of 2019. 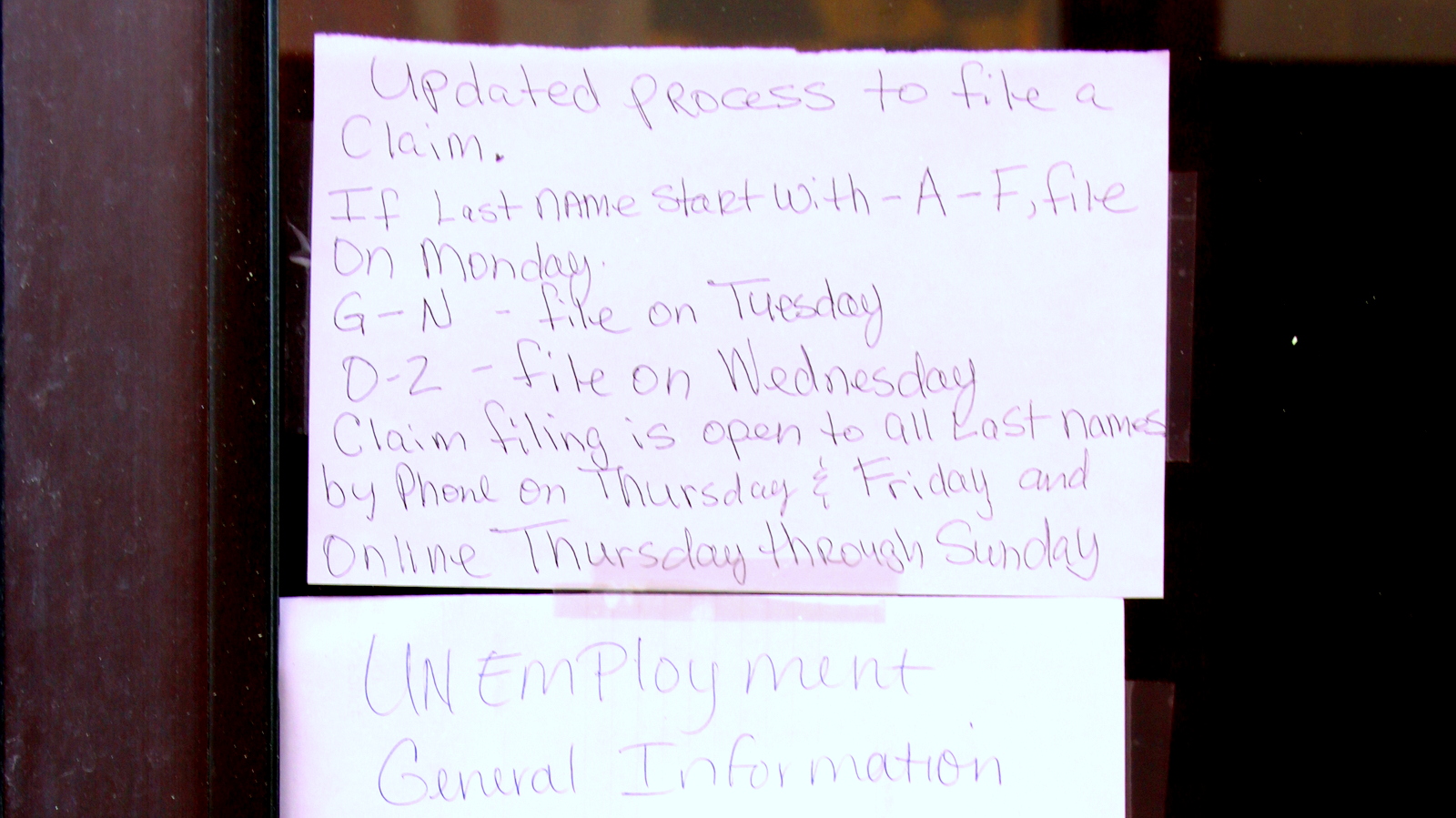 Signs on the door of the Maryland Labor Department’s office in Baltimore ask applicants to stagger their claims. (Louis Krauss)

“Calls do end up getting dropped because the system can only handle so many calls at once,” he acknowledged.

“Calls do end up getting dropped because the system can only handle so many calls at once”  – Mike Ricci, spokesman for Governor Hogan.

Ricci said it wasn’t until late Sunday night that state officials received federal guidance on how Maryland’s jobless will receive the payments allocated to them by the newly-enacted CARES Act.

“One piece of the CARES Act implementation is getting the $600 plus-up payment out to current and new claimants quickly,” Ricci said. “We hope to have an update on this soon as well.”

Outdated technology, together with an overwhelmed workforce, is hampering the claims process in Maryland during the COVID-19 outbreak, according to officials of the union representing labor department employees.

“My chances of winning the lottery [are] way higher than my chance of being able to reach someone at the Maryland unemployment office”  – Fed-up claimant.

“I feel like my chances of winning the lottery [are] way higher than my chance of being able to reach someone at the Maryland unemployment office,” one said.

Many attest to dialing hundreds of times a day with no luck getting a representative on the line. The Brew tried dozens of times this week to get through to an agent – and failed. 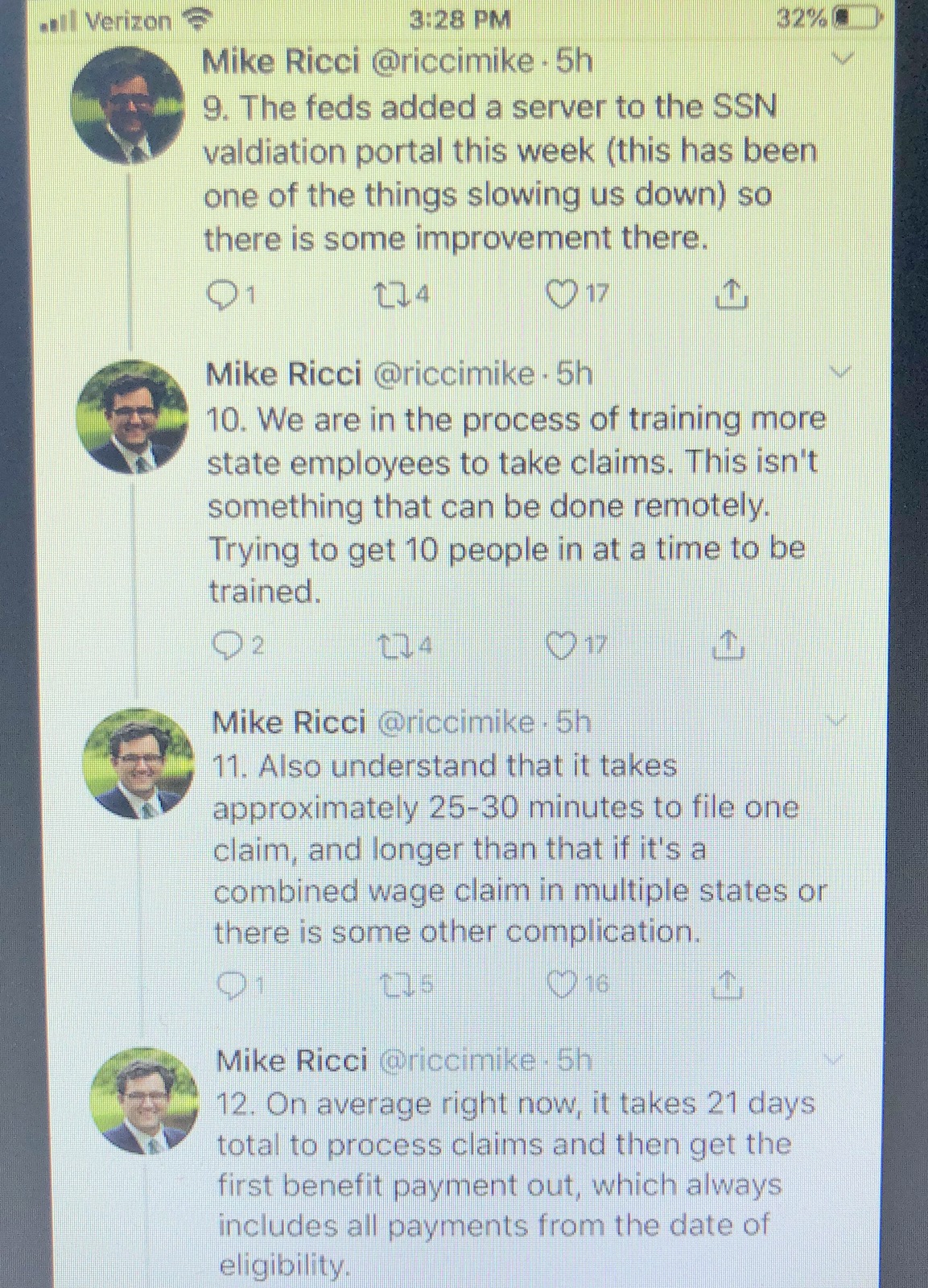 Unlike Massachusetts, Washington and other states that allow most unemployment claims to be filed online, Maryland’s website only accepts applicants who have solely worked in Maryland.

As a result, some claimants are turning to states with simpler procedures.

Lucaci, who campaigned in Washington D.C. for a presidential candidate up until March, said she was dumbfounded by how poor Maryland’s system was compared to other states where she previously filed for unemployment.

“This isn’t rocket science here. Get an IT person in there to update the system so that everyone can file online,” she said.

Eventually, Lucaci figured out that Massachusetts would let her file for unemployment benefits since she had campaigned for one of its representatives during the 18-month time period.

It took her 10 minutes to complete the Massachusetts claim online, she said.

After doing some more research, Lucaci said she concluded that Maryland’s inefficiency stems from an over-concern about the losing someone’s data.

“What’s this system on? Microsoft 1993?” Lucaci wondered. “It’s just four jobs, how are you going to lose that data? They should contact someone at Facebook to fix this – they still save my photos from 2007!”

To deal with the onslaught of new claims, Maryland has set up a dedicated email address – ui.inquiry@maryland.gov – where people who can’t get through in the phone can get, presumably, quicker help.

Due to the high call volumes, the Department of Labor is encouraging people filing for unemployment to call on the day of the week set aside for the first letter of their last name:

Monday for last names starting with A through F, Tuesday for G through N, and Wednesday for O through Z. The call centers are also open on Thursday and Friday for all last names.

Agency spokesperson Fallon Pearre stressed that residents will not be denied benefits if they are having difficulty registering due to the call volumes.

“No matter when or how they file, Marylanders become eligible for benefits starting the day after they separated from employment,” she told The Brew. “And if they are eligible, they will be paid for all benefits due.”