Maryland could lose up to $2.8 billion this fiscal year from the economic lockdown stemming from the coronavirus outbreak.

But the impact on the state would be worse without the measures that have put an unprecedented number of people out of work, Comptroller Peter Franchot said Friday.

The $2.8 billion represents about 15% of the state’s current budget. Revenue for May and June could drop by half, according to Franchot.

“Trust me,” he said, “the storm has finally arrived, and it is stronger and more devastating than anything we’ve seen before.” 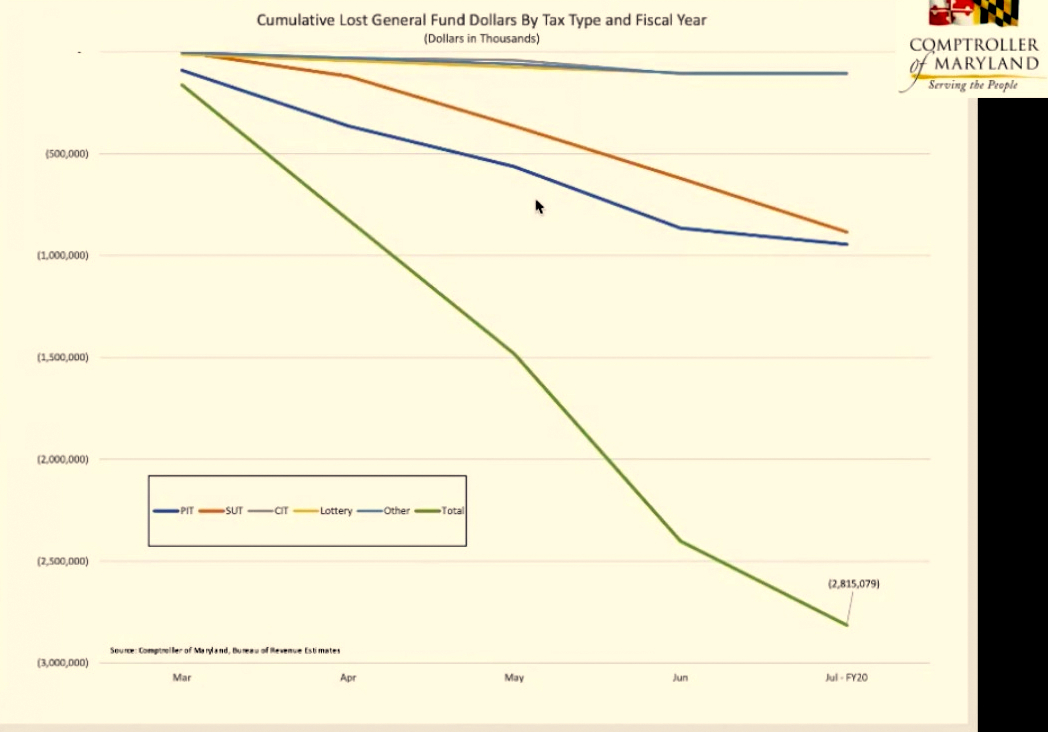 The green line shows the projected drop in general revenues between now and the end of the 2020 fiscal year on June 30. (Maryland Bureau of Revenue Estimates)

Getting a Grip on Jobless Claims

In response to the projections, Hogan today declared a freeze on hiring and spending by the state, with some exceptions in order to respond better to the pandemic.

One exception is the state labor department, which is reorganizing to handle the unprecedented amount of unemployment insurance claims that have flooded into the agency in the last two weeks.

Labor Secretary Tiffany Robinson said she is doubling the staff of the unemployment call center, and 150 state employees will be temporarily reassigned to the department to help process applications.

The department will also take applications by phone on Saturdays to reduce the backlog of claims.

The number of known coronavirus cases in Maryland rose to 6,968 today, according to the state health department.

Yesterday 33 Marylanders died of the virus, bringing the total number of deaths to 171.

Hogan said he has paid no attention to the hundreds of bills the General Assembly has sent to his desk following its shortened session. And because of the pressure on the state’s budget, Hogan said he is unlikely to sign any bills that would increase spending.

Hogan said the state will start sanitizing and reusing N95 masks because the supply of equipment is “definitely not anywhere near where it needs to be.”

Hogan also announced today an arrangement with the Federal Emergency Management Agency in which up to 80,000 N95 masks will be sanitized every day for reuse.

“As everyone knows, these masks are in very short supply worldwide,” Hogan said. The supply of equipment is “definitely not anywhere near where it needs to be.”

Andrew Schaufele, director of the Bureau of Revenue Estimates that calculated the budget projections, said the alarming loss of revenues doesn’t mean that Hogan should send Marylanders back to work.

“Our governor’s strong and timely response is absolutely mitigating the economic downsides of this pandemic,” Schaufele said. “In their absence, the final economic impacts would be far greater and play out over a much longer period of time.”