The City Council unanimously passed a resolution tonight calling on the mayor to make motel rooms available to all homeless people, noting that congregate living spaces in city shelters are potential hot spots for the spread of the coronavirus.

“We know this won’t happen overnight,” said City Council President Brandon Scott, who said the city nevertheless must do “everything in our power to make safe everyone we can make safe.”

Scott proposes using some of the city’s “rainy day funds” to pay for sheltering the homeless in individual quarters.

Building on that idea, Councilman Bill Henry tonight cited the $103.6 million allocated to Baltimore as part of the $2.2 trillion Coronavirus Aid, Relief and Economic Security (CARES) Act passed by Congress and signed into law last month by President Donald Trump.

“These funds cannot be used for the budget deficit. They can be used for things not budgeted, which would be housing the homeless specifically impacted by this pandemic,” Henry said.

On any given day, there are more than 4,000 homeless in the city, many of them spending the night at shelters operated or funded by city-approved vendors.

The Council resolution calls on Mayor Bernard C. “Jack” Young “to immediately make available sufficient hotel rooms and other non-congregate housing to provide homes for all interested persons currently residing in congregate spaces within homeless shelters and all other homeless persons in Baltimore City.”

It further calls for Young to seek assistance from the state, nonprofits, educational institutions and businesses to gather proper staffing to make non-congregate housing available, and for the Mayor’s Office of Homeless Services to report to the Council by April 27 on whether it has adopted the changes.

Lester Davis, the mayor’s spokesman, said tonight that while housing the homeless is the long-term goal of the administration – as it has been for the last three city administrations – there isn’t enough support staff to make enough individual rooms immediately available.

“We committed to an early allotment of 150 people getting moved into motels, and we knew we needed to grow that number,” Davis said. “Identifying and paying for hotel beds is the easy part of a three-part equation. Having adequate staff so they feel supported – there is the challenge.”

“Identifying and paying for hotel beds is the easy part. Having adequate staff so they feel supported – there is the challenge.”  – Mayor’s spokesman.

Last week the city began moving 150 of the city’s most vulnerable population – including those homeless over 62 years old – into motels. The administration has also moved roughly 50 persons found to have COVID-19 symptoms into separate quarters.

The city reserved “most, if not all of the rooms” in three Baltimore-area motels as part of an open-ended contract with the facilities, Jerrianne Anthony, director of homeless services, told the City Council last week.

“Our goal is to house every homeless individual who would want to be housed in that [motel] setting,” Anthony said. “We’re limited not so much by capacity, but housing partners and staff. It’s challenging to identify enough staff.”

Homeless advocates say that’s not enough, and that shelter residents are still at high risk of contracting the disease because of poor sanitary conditions and overcrowding.

Mark Council, who has lived at the Weinberg Housing shelter on the Fallsway, said hundreds of people are still there at night with no way to maintain six feet of distance since they are using the same dining areas, bathrooms and entrances.

Last week, Young moved the 124 homeless men from a shelter in East Baltimore to a former school and gymnasium on Greenspring Avenue because the previous shelter presented health risks.

While cots at the new location are placed six feet away from each other, Council said the space is still too closed in.

“OK, the beds are further apart, but the eating quarters and bathrooms are the same, so it’s not that great,” said Council, who believes the city should have prioritized permanent housing instead of moving the homeless to motels and other temporary quarters.

“All the time it took to put these people in school buildings where they’re kept in warehouses, it could’ve been used to arrange a real house for them,” said Council, a member of Housing Our Neighbors, which describes housing as a basic human right. “We’re not animals, we’re human beings.” 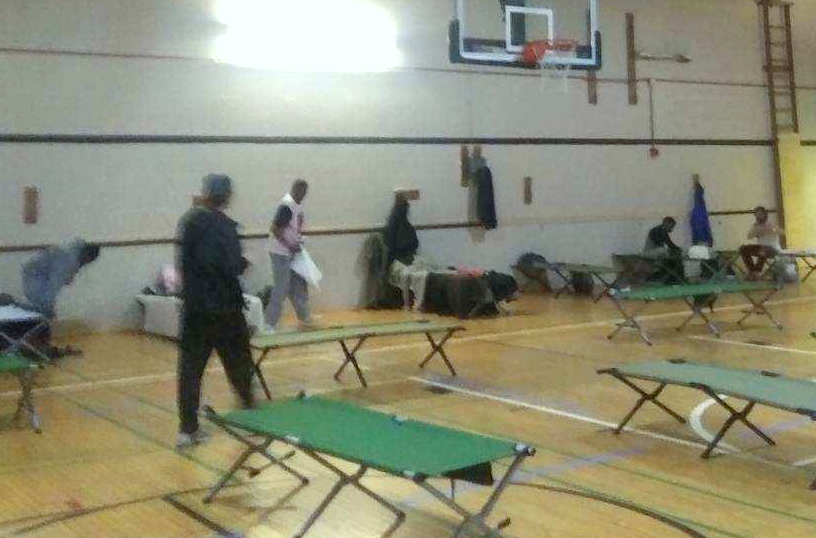 Men taken from a shelter on East Monument Street currently sleep in congregate quarters on fold-up beds in the gymnasium of a former school on Greenspring Avenue.